The 127-year-old building in Phrae is seen before it was torn down. (Photo by Subin Khuenkaew)

PHRAE: Environment Minister Varawut Silpa-archa on Sunday pledged to have the Bombay Burmah building rebuilt in six months after the century-old wooden house was knocked down by officials during a mishap earlier in June.

"I am deeply [sorry] for the incident, but offering words is not enough," Mr Varawut said. "It is time to take action to restore the building and, above all, the people's spiritual well-being."

The minister made the statement in front of residents of Phrae who gathered for merit-making activities in front of the Bombay Burmah site.

The event turned out to be emotional.

Mr Varawut repeatedly performed the "wai" gesture to convey his apology. The public has criticised him since June when the building was demolished during renovation work.

The house is located in the Chetawan Arboretum, a site overseen by the Department of National Parks, Wildlife and Plant Conservation (DNP). The land is under the Environment Ministry's jurisdiction.

The 127-year old teak wooden house was considered a local heritage item and had significant historical value in the province. The site is still cherished by locals.

At the time the house was built, Phrae was regarded as a major trade hub for timber business in the country.

Many foreign countries set up timber trade companies in the province.

Bombay Burmah was once an office of the Bombay Burmah Trading Company, which was granted a logging concession in the western forests of the Yom River in 1889.

The DNP has defended its actions, saying the building's concrete foundations needed repair, and renovation work needed to be done to make the structure safe to use again.

However, the explanation was not enough to counter negative public sentiment.

The Senate also launched a probe into the matter.

Mr Varawut promised a similar case would not occur again. 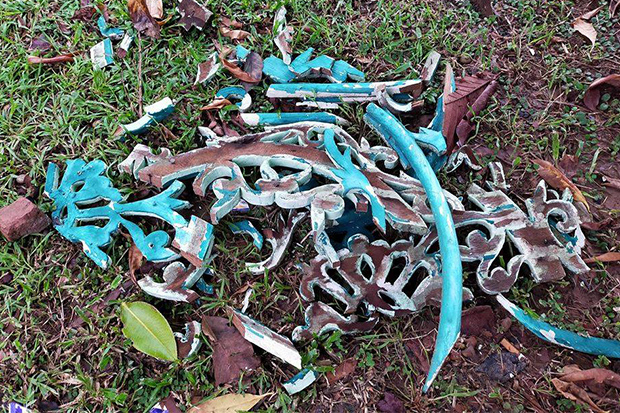 After the destruction of the Bombay Burmah building, he said he ordered all departments to study a structure's historical significance and value before conducting any renovation work.

Mr Varawut also ordered the drafting of guidelines on how to approach the reconstruction buildings with high cultural and historical significance.

He said the ministry is trying its best to up for its mistake to the community.

The ministry is working with the provincial administration to launch a hearing in September to discuss the reconstruction of the Bombay Burmah building.

Reconstruction is expected to commence in October, and it will take six months to complete.

The ministry will be responsible for managing the reconstruction. A budget of 8 million baht will be prepared.

In the upcoming community hearing in September, when residents of the province will choose one of three proposed designs for the reconstruction of the house.

Three blueprints are being prepared by a team of historians and archaeologists from the Fine Arts Department (FAD).

Therdsak Yenjira, the chief archaeologist for the seventh FAD Office based in Chiang Mai, said his office proposed three models, including the building's original design, a modified version and its latest form before it was dismantled in June.

Later, the house was redone with concrete used as its base, he said.

"We need to let the public decide which design they want to be built," Mr Therdsak told the Bangkok Post.

"Regardless of its new look, the next Bombay Burmah version will retain its old soul as 80% of the teak wood is original."

He said a FAD team would dig around the Bombay Burmah site to find pieces of the building's original roof to serve as a model for its new roof.

In other news, the Environment Ministry has agreed to partially stop the renovation work on the Louis T Leonowens building in Lampang, a century-old building that belonged to an English timber company.

Residents had requested the ministry to do so, saying the renovation work conducted by the Department of Public Works and Town & Country Planning failed to respect the building's original version.

They also said locals were not invited to discuss the work's planning.

Komol Pattarrittigul, a community representative, told the media the province received 2.9 million baht to renovate the building. However, its new roof is different from the building's original design.

The ministry and residents agreed to jointly set up a committee to oversee the renovation and find a matching roof.