conflict fears: Today, the Democracy Monument will be a potential flashpoint as the anti-government 'Free Youth Group' and an opposing faction are both set to hold rallies at the site. The police have said they will deploy 600 officers to ensure the gatherings remain peaceful.

The coup-installed 250 senators will be a decisive factor in constitutional amendments pushed by several parties and it remains to be seen whether the Senate's role in charter change can help defuse political tensions stemming from student protesters who are also demanding charter revisions.

Observers said the senators are unlikely to back any proposed amendments that result in the Senate being stripped of its power to vote for a prime minister or the current batch of senators being dismissed, although some senators told the Bangkok Post they have no objection if the charter is amended in the interests of the public.

Many lawmakers agreed the charter is flawed and should be rewritten, and a push for charter change started even before the formation of the coalition government with the Democrat Party insisting on charter change as a precondition for joining the coalition led by the Palang Pracharath Party.

In December last year, the House of Representatives voted to set up a committee to study constitutional amendments, with Pirapan Salirathavibhaga, adviser to the prime minister as its chairman.

The committee comprises both government and opposition MPs, as well as experts from outside. It has until next month to complete its work.

Right now, calls are mounting for charter amendments as student activists have hit the streets in recent weeks, demanding the resignation of Gen Prayut's cabinet, the dissolution of parliament and the drafting of a new constitution.

The protesters' demand for charter revisions is in line with the position of the government and the opposition parties, while some senators also said they have no objections to charter amendments.

Prime Minister Prayut Chan-o-cha recently reiterated support for charter amendments as it is part of the government's policy statement. He said the government will present its own version of a charter rewrite bill in the next parliamentary session.

The Pheu Thai Party, the main opposition, is seeking to amend Section 256 of the charter to clear the way for a rewriting body to be formed to come up with a new constitution.

Others targeted are those associated with the Senate, particularly Section 269 which enabled the NCPO to appoint 250 senators, known as the transitional Senate, to serve for five years. These senators are allowed to join MPs in voting for a prime minister.

The constitution stipulates requirements for amendments, which are seen by critics as a hurdle for any attempts to revise it, particularly Section 256.

Under the section, a charter rewrite bill requires the support of at least 376 of both chambers, including at least one third of the Senate or 84 senators to pass its first reading.

In a second reading, a committee is set up to scrutinise charter provisions targeted for change.

A majority vote of members of both chambers or at least 376 is needed for each amendment.

The bill needs the support of members of both chambers or at least 376, including 20% of MPs from all opposition parties, and at least one third of the Senate or 84 senators, to win endorsement from the parliament in its third reading, according to Section 256.

Amendments to general provisions, provisions associated with the monarchy, the power of the courts of justice, independent agencies, the qualifications of political-office holders and the charter amendment process require a referendum, according to the section.

The section also stipulates that if any MPs and senators dispute the changes, they can ask the Constitutional Court for a ruling within one month.

If no one mounts a legal challenge, the amendments will be submitted for royal endorsement and come into effect.

Senator Wanchai Sornsiri told the Bangkok Post that the constitution gives the Senate a role in charter amendments and changes require the support of the Senate.

"Therefore, the Senate plays a key role in deciding whether the constitution can be amended," Mr Wanchai said.

"I believe the Senate is unlikely to oppose any proposed amendments because the main task of senators is to screen legislation," Mr Wanchai said.

He also said he did not discuss the charter rewrite issue with senators who came from the military, but he said he believed they would also agree if the charter changes benefit the country.

Commenting on a push to amend sections related to the Senate, Mr Wanchai said the provision that gives the Senate the power to join MPs in voting for a prime minister is no longer necessary and the government should now be able to do without the section.

"The government relied on the Senate only before taking office. The coalition parties had more than 250 MPs when they formed the government. Currently, they have 270-280.

"Therefore, I don't see any reason why they should have to depend on the Senate now or in the future," Mr Wanchai said.

On a proposal by the opposition parties to set up a charter drafting assembly to come up with a new constitution, Mr Wanchai said the process will be lengthy and could take a year.

The proposed new constitution may also face resistance from people from other parts of the political spectrum, Mr Wanchai said.

It would be a waste of time if the draft of a new charter drawn up by the drafting assembly is rejected by the parliament, Mr Wanchai said. The best solution is to amend specific sections which are deemed to be controversial and try to find a common stance on them, Mr Wanchai said.

"Personally, I am not against constitutional amendments. Nobody will cling to power if the amendments are for the sake of people's benefits. I believe the Senate will have no problem," he said.

Senator Lertrat Rattanawanich said the Senate is only part of the charter amendment process, and senators should have no objection when there is a general agreement on amendments.

"Senators do not covet power. If all involved agreed that this will benefit the country, I think the Senate is ready to move in that direction. If some charter amendments can foster unity and resolve conflict, I believe the Senate will have no objection," Gen Lertrat said.

He also echoed the view that setting up a charter rewriting body will be a difficult path to take, and amending sections that do not require a referendum should be an easy option. 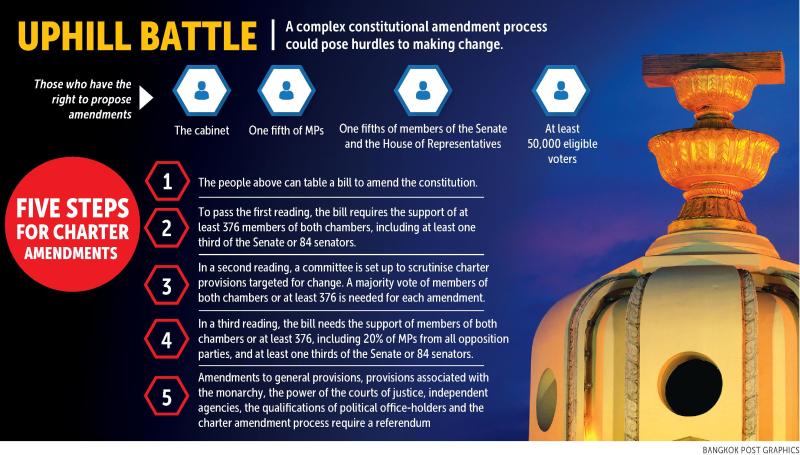 Senator Seri Suwannapanont said demands for constitutional amendments by the opposition parties and other groups would lead to two referendums -- one on the amendment on the charter change process and another on provisions, particularly on the Senate. Each referendum will cost 3 billion baht to hold.

Mr Seri, also a former charter drafter, also said constitutional amendment demands by student protesters are in sync with those of the opposition parties.

"Frankly speaking, they are a mob that chooses sides. Their demands are not based on ideologies without political affiliations.

This will prompt resistance from another side-taking group," Mr Seri said.

It depends on both lower and upper chambers of the parliament to find a solution, he said, adding that some of the protesters' demands have gone far beyond charter amendments, and upset many Thais.

At a rally last Monday, student protesters expanded their demands to include reforms of the monarchy.

Senator Monthian Boontan said that it is hard to say what other senators think about charter amendments because the Senate has not discussed its stance on the issue.

The Senate comprises those who have both conservative and liberal views and their opinions on the charter amendments vary, Mr Monthian said, adding he does not oppose charter changes that are acceptable to the public.

He also said the proposed body to write a new constitution should be set up so stakeholders from across the political spectrum can agree upon the content of the new charter.

Currently, political groups will only oppose the constitution proposed by their rivals, Mr Monthian said.

He said the coup-appointed senators must now work in the best interests of the public.