The row over a plan to purchase land from a community behind the old Mor Chit Bus Terminal to build an elevated road as part of a "smart city" project around the mass transit station has raised questions about the way the state spends taxpayer money on land expropriation.

The issue caught media attention early this month after residents from a community in Soi Vibhavadi 5 came out to accuse the Bangkok Metropolitan Administration (BMA) of violating the Land Expropriation Act.

The BMA in August issued a land expropriation decree to enable the purchase of 25 land plots along a 530-metre stretch from Soi Phahon Yothin 18/1 to Soi Vibhavadi 5. The BMA said the Ministry of Transport needed the plots of land to develop infrastructure.

The residents on Monday filed a lawsuit with the Administrative Court, demanding an injunction against the decree, which is expected to expropriate 35 land plots stretching 16,205 square wah, or 40.51 rai, in Chatuchak district. The community is located between the Phahon Yothin Road and Vivhavadi Road, adjacent to the current BTS depot.

The total market price for the plots is 3.2 billion baht, according to Wininorn Preechapinitkul, a local community leader who may need to move out if the project continues. She said residents are adamant about the need to overturn the decree. "The BMA did not come to survey or hold a public hearing about the effects [of the project] on the community," Ms Wininorn told the Bangkok Post.

She claimed the demarcated land plots mentioned in the decree were unclear because the information listed was based on two previous land decrees issued over a decade ago. But what prompted the residents to go to court was the purpose of the decree.

Ms Wininorn said the BMA's plan violates the act, which stipulates that seized land must be used for either a public benefit or national security purposes. She said the land will be used to build an elevated road that will link the Mor Chit Bus Terminal and a commercial complex to the Don Muang Tollway.

The community leader said the bus terminal would only occupy 15% of the land, while 85% will be used for commercial development purposes. She said those who will benefit the most would be the ones behind the development of the commercial complex, shopping mall, hotel and apartments.

The Bangkok Bus Terminal (Chatuchak) or Mor Chit 2 Bus Terminal, a transport hub for those looking to travel north, now sits on Kham Phaeng Phet 2 Road, near Chatuchak Market. Some reports say the terminal will be returned to its old ground at the community.

The land for the former Mor Chit Bus Terminal is now being leased to accommodate a BTS skytrain depot, which will be moved in the near future. According to a mass transit plan written over 20 years ago, the Mor Chit Bus Terminal is to be moved back and the property it leaves behind is to be developed for a "smart city" project with commercial development around the mass transit system.

But the infrastructure plan has been changed multiple times. Earlier this month, Sorapong Paithoonpong, deputy transport permanent secretary who chairs the state-run Transport Company, vowed the terminal on Kamphaeng Phet 2 Road would not be relocated in the near future. The Transport Company was looking to renew its lease on the State Railway of Thailand land where the terminal is currently situated. Mr Sorapong insisted that any relocation plan would require careful consideration as environmental impacts would have to be addressed.

Despite the uncertainty surrounding the plan, the old Mor Chit terminal was designed to become part of a new commercial hotspot dubbed a "Smart City". The land it sits on is state property that belongs to the Treasury Department under the Ministry of Finance.

It is surrounded by private plots of land. Among them are the 35 plots now listed in the land expropriation decree. The developer hired for the job was originally SET-listed contractor Sino-Thai Engineering and Construction Plc (STEC). The firm had planned to develop a commercial complex on an 11-rai plot near the Mor Chit skytrain station.

There would be twin towers standing 36 storeys tall and a three-level basement. Originally, the Mor Chit Bus Terminal was planned to occupy three floors in the building. In October, BTS Group -- the same firm operating the BTS Skytrain -- purchased shares from the STEC. It now has the right to develop the commercial complex. The land expropriation legislation is enforced by BMA. However, Thaiwut Khankaew, director of the BMA's Public Works Department, said the administration is not involved in the project. "We are a legal body executing land expropriation decrees for any public project," he said.

He said the BMA had invited various government units to find solutions to the problems that have affected people and also called on officials to urgently sort out misunderstandings with residents. "Without a conclusion on the land expropriation [plan] from the project owner, the BMA will not take any action," the director said.

Apart from the questionable purpose of the land expropriation decree, residents also question whether it is realistic to move the Mor Chit Bus Station back to its old grounds. Ms Wininorn said residents could find no good reason for the ministry to move the bus terminal as the old location still suffers from severe traffic congestion and pollution every day. The current location, by contrast, is more suitable as it is already connected to railways and mass transit trains. The Mor Chit 2 Bus Terminal is closer to the Bang Sue Grand Station, a major transport hub in Bangkok that will serve as a junction for planned high-speed trains, Blue and Red Line subways and Airport Rail Link. 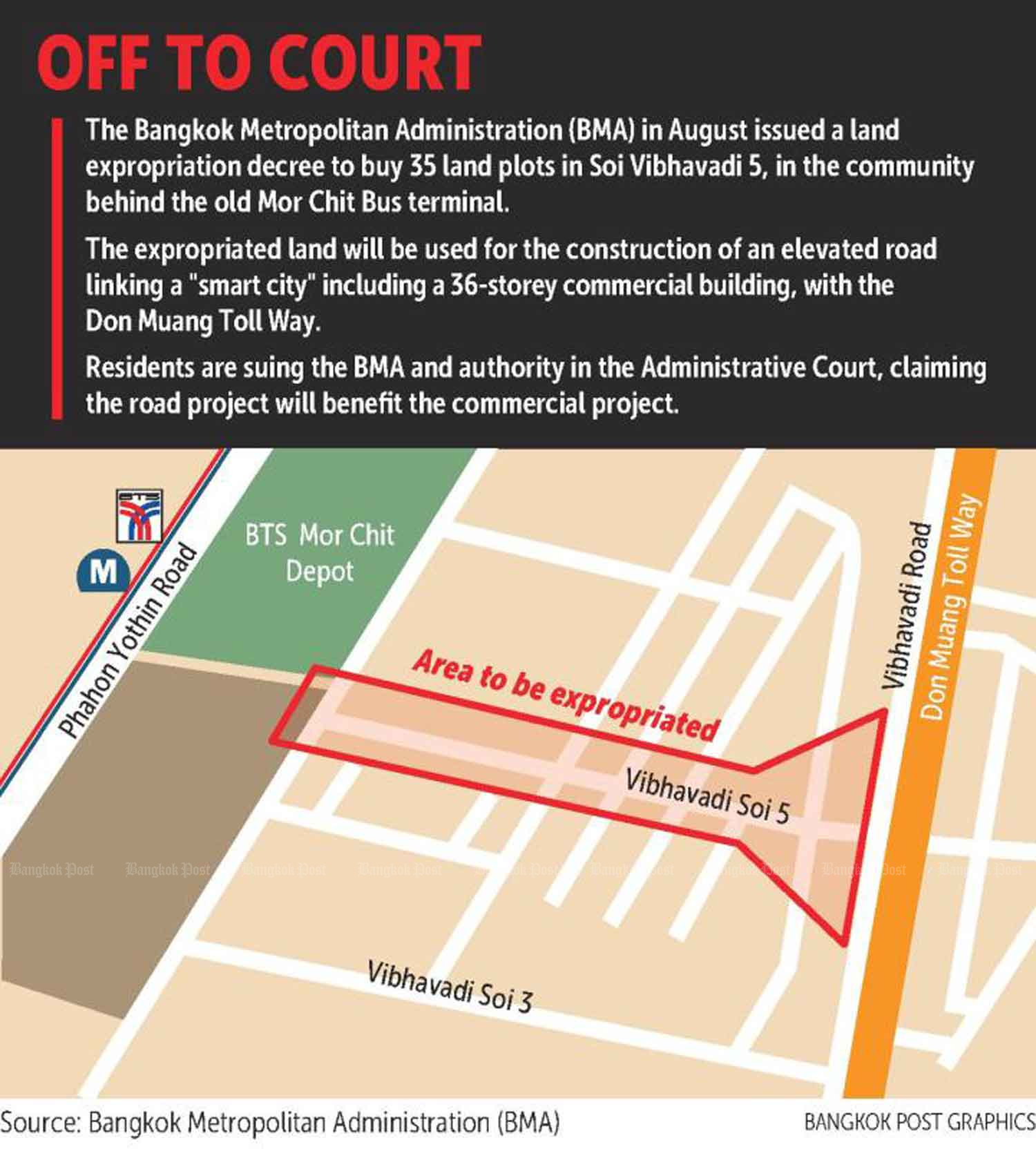