Pension drama didn't have to happen

GRATITUDE: Buan Losuwan, 89, right, is greeted by a senior army officer who presented her with money donated by fellow military personnel to help her repay debt to the state.

Buan Losuwan got the shock of her life when an official letter arrived on her doorstep demanding the return of more than 80,000 baht of pension payments she had received over the years.

It turns out Buan, 89, of Chalerm Phrakiat district in Buri Ram, had been picking up two cheques each month, her official pension and a stipend granted her by the army after the death of her son, Jakkrawut Losuwan, a sergeant major first class who died guarding an arsenal depot in Nakhon Ratchasima in an explosion there in 2001.

She had been receiving the monthly stipend of 5,000 baht since 2001 and the pension since 2010. But receiving both payments similarly classified as financial aid at the same time is against the law. Now, the Comptroller General's Department (CGD) wants her to hand back 10 years worth of pension valued at 84,400 baht, plus interest.

The elderly woman's family insisted they could not afford to pay back the money and said the blame falls squarely on the shoulders of the state agencies for failing to run a check on Ms Buan's aid receipt history in the first place. The family also said she is entitled to both payments, by age for her state pension and for the loss of her son while he was performing his duty.

However, the assertion goes against every word in the CGD's book. The department cites the legal mantra that no two state funds of similar nature can be disbursed to the same party at the same time.

The agency insisted on repayment, although it offered her a choice of settling the bill in installments. "I was petrified to have been issued the notice. Why didn't they [the department] act sooner when the stipend had just started?

"They waited 10 years to tell me I owed them money. I have no clue how I can pay it back," said a teary Ms Buan.

Ms Buan and her husband received 5,000 baht each as a stipend but the payment for her husband stopped when he died. The stipend is not nearly enough to sustain her financially. Ms Buan spends a large portion of it on travel expenses to and from hospital for treatment of heart disease, several times a month.

Ms Buan's daughter, Laddawan Losuwan, 66, said it breaks her heart seeing her mother served with the notice. The family barely makes ends meet from growing and selling rice. "If I could, I would go to jail for my mother over this pension business. We simply have no money to pay it back," Ms Laddawan said.

Dated IT to blame

Thasa Chinram, director of the social welfare division at the Charoensuk Tambon Administrative Organisation whose jurisdiction covers Ms Buan's village, said no central database of benefit payments made by various agencies existed a decade ago, which is why she had never received notice that she wasn't entitled to both.

It wasn't until a new IT system was introduced that cases of duplicated payments were revealed, Ms Thasa added.

The installment plan being offered extends to five years with yearly interest of 7.5% starting to accrue only after the first 12 months have passed. "We do feel sorry for Ms Buan and her family. All we can do is suggest they opt for the installment option," she said.

The family agreed to pay the sum back over 20 months through a reduction in her 5,000-baht pension, which looked set to leave them struggling to pay the bills.

At that point, the army came to Ms Buan's rescue. On Jan 29, Maj Gen Chalit Banjongpru, commander of the 21st Military Circle and senior soldiers in various units in Nakhon Ratchasima, visited the Losuwan family with a cheque to cover the whole amount owed to the CGD.

The money was chipped in by soldiers in the units and army chief Gen Narongphan Jitkaewtae who paid a separate visit to the family.

The commander has pledged not to leave army personnel and their families behind.

Ms Buan has been bailed out although 15,000 other people in the same predicament are not so lucky.

A source familiar with the issue said the databases were not working in sync and that was the problem which various state agencies are fully responsible for tackling. Many elderly people do not know about the regulations governing the overlapping payment ban.

State agencies should be audited for disbursing the aid. It should not be the case of the payment receivers being audited after the aid has been disbursed, according to the source. 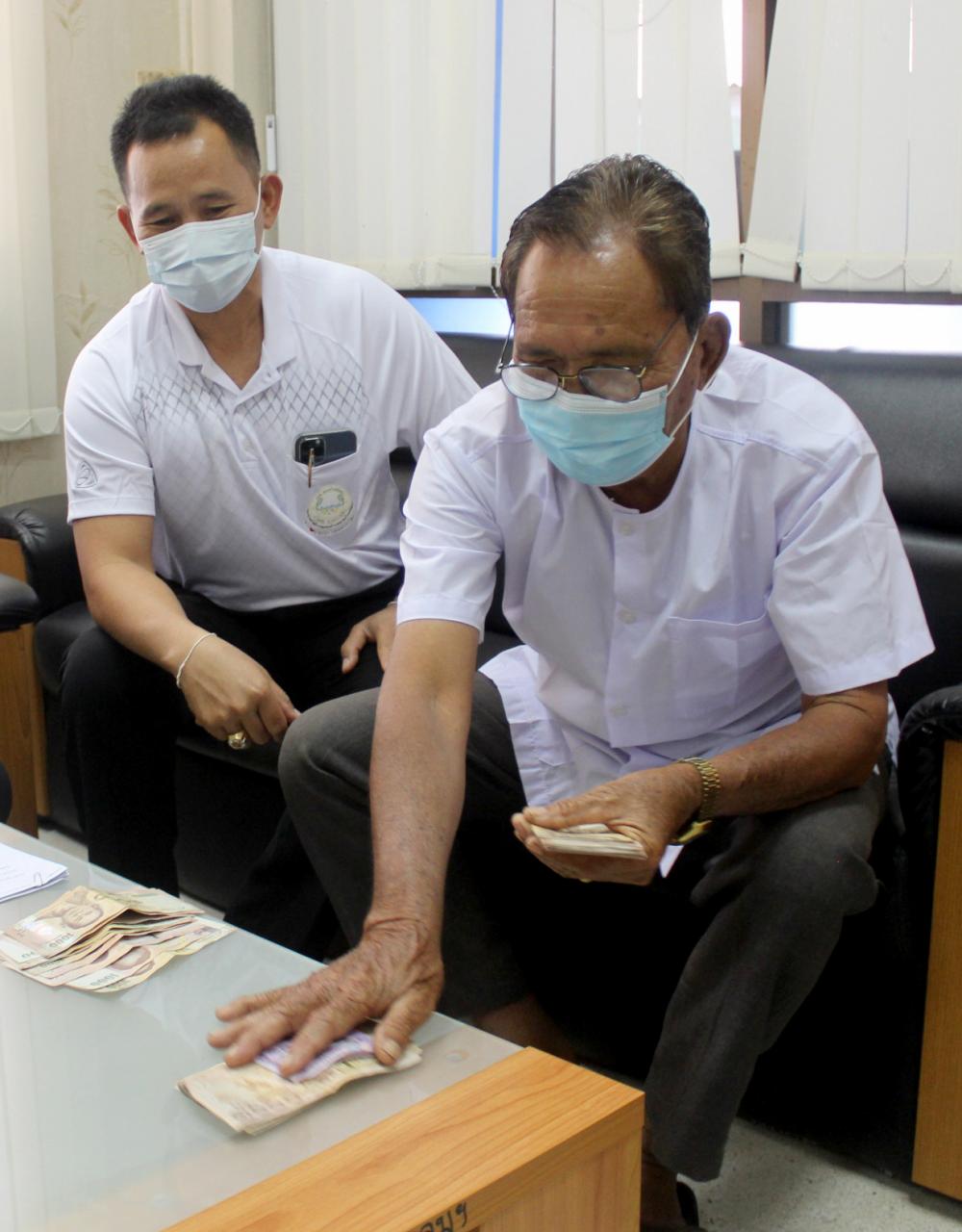 A sour note: Thawee Poonkrathok, 83, of Nakhon Ratchasima, counts out the banknotes as he returns the 57,600 baht the government claims he was overpaid in his pension due to an overlap with the monthly stipend he also collects for the death of his policeman son.

However, changes are difficult and will take time to implement. In the meantime, people are urged to negotiate with the local administrative organisations to delay paying back and settling the payments if they are able to.

The old-age pension was launched in 1993 to improve elderly people's livelihood. It started out paying 200 baht a month.

Eight years later, the power to manage the pension was transferred to the Department of Local Administration and the Bangkok Metropolitan Administration. In 2006, cabinet gave the green light to raise the pension to 500 baht a month. But the pension came attached with the condition that the receiver must not already be claiming other state welfare or aid.

Since July 2019, the CGD has remitted the pension to the receivers' bank accounts while reining in the agencies disbursing the pension. Any disbursements deemed a duplication results in the payments being suspended pending an investigation.

As the issue was gaining momentum, Prime Minister Prayut Chan-o-cha to moved to ease what threatens to descend into a political fiasco.

The local administrative organisations have been instructed to put the payback notices on hold while state agencies are sorting out the problem in a way that would not cause people's grievances and violate the regulations. "To all the folks out there, please do not worry. I give you my word we will deal with the issue. I understand how you feel. You did nothing wrong and the officials were only following the regulations," Gen Prayut said.

Interior Minister Anupong Paojinda said an amendment to welfare aid regulations was being discussed. So far, the back payment issue has been settled with 4,052 people and checks are being performed on 1,000 other cases.

Meanwhile, Khunying Sudarat Keyuraphan, core leader of the Sang Thai political group, said the recall of pension payments should not apply because the Interior Ministry regulations governing it do not assume the status of a law. The regulations cannot contradict the Elderly Act, so people should not have to return the pension money.

Also, the regulations are not enforceable on the elderly who receive the pension, she wrote on Facebook. Khunying Sudarat suggested the ministry either revoke the regulations or order the local administrative organisations (LAOs) not to demand the back payments. The prosecutors may also advise the LAOs not to proceed with the payment demand. "This would not have been a problem to begin with had the relevant agencies had the courage to not take action," she said.

Pension, stipend not the same

Sureeat Trimakka, member of the People's Network for Social Welfare, said state agencies should not ditch their responsibility and let the elderly pick up the tab. She said the stipend is given to Ms Buan so she could sustain herself without financial support from her son who died on duty. It was a form of compensation and should not be regarded in the same league as the pension.

"There is essentially nothing overlapping about these two payments," she said. "No one wants to get their hands on the stipend because it means a grave loss for them. The money is a remedy whereas the pension is nothing of that sort." The system of screening people for their entitlements must also be efficient, Ms Sureerat said, noting the back payment issue has demoralised many people.