A cook sits outside her eatery in Soi Rang Nam in the capital. Business has plummeted in the wake of the outbreak of the third wave of Covid-19.

The third wave of Covid-19 in Thailand is nothing short of an unprecedented crisis for the country's public health system, just as it is for its already flailing economy.

With new lockdowns looming large in the most virus-affected cities, restaurants are struggling to keep their heads above water.

Ball, the 50-year-old owner of a northeastern Thai restaurant in Soi Rang Nam in Bangkok, said small businesses such as his were suffering from a severe drop in sales.

There had been almost no customers since the Covid-19 situation in Bangkok started to worsen again this year.

His restaurant, which sells popular Isan dishes such as papaya salad and grilled chicken, only earns enough for him to pay the salary of a long-time employee and buy food for himself and his siblings.

He and his family have had to do everything at the restaurant themselves since staff started leaving at the start of the pandemic in March 2020.

Before then Ball used to employ 3-4 cooks and up to 10 waiting staff. Now he has only 1-2 waiters and one old cook who has been with him for more than 30 years. 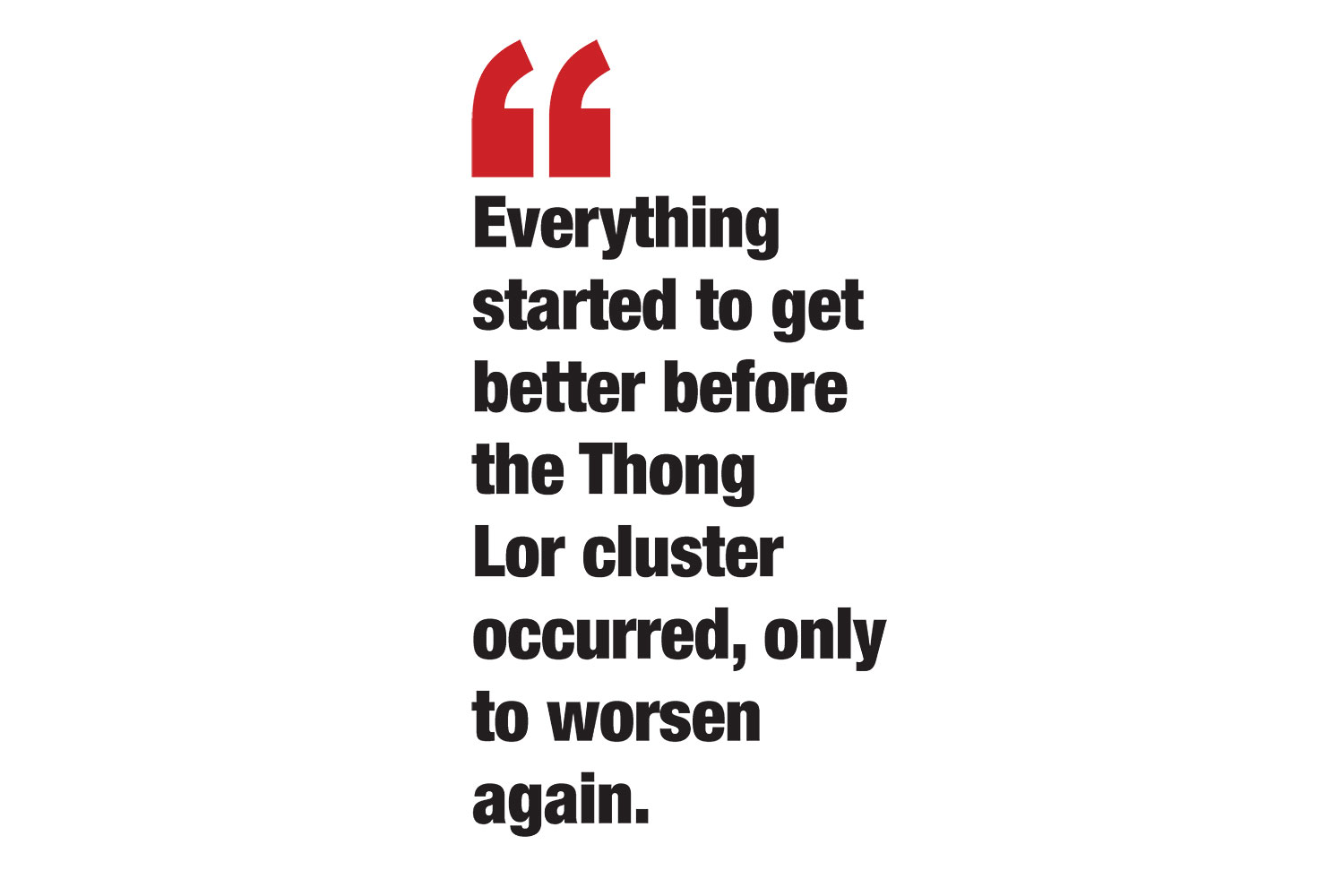 Everything started to get better before the Thong Lor cluster occurred, only to worsen again, he said.

"If the government had issued more stringent measures to curb the pandemic, I fear that my restaurant might have had to close down," Ball told the Bangkok Post.

He still considers himself lucky because he doesn't have to pay rent for his premises -- many that do have been forced to shut, some temporarily and some permanently. Some have simply fled to avoid paying the rent.

The global situation has not yet improved and that's why he had to lay low and use his savings only when necessary.

"We are badly affected by the work-from-home policy," he said. "Soi Rang Nam is now deserted because workers are now having to work from home.

"The ban on alcohol sales has had little impact on us because almost 100% of our revenue comes from food."

Bangkok is one of 18 "red" provinces declared maximum-control areas during the latest virus upsurge. The sale of alcohol is prohibited in the capital's restaurants, although sit-down dining is allowed until 9pm and takeaway orders until 11pm.

Ple, whose father owns a rice porridge shop in the bustling Talat Huai Khwang area, said food was their main source of income and while they also sold alcoholic drinks, the government's ban on alcohol sales had not greatly affected business.

Ple said 70% of the income of the rice porridge shop came from food before the pandemic. Nevertheless, the order to allow dine-in until 9pm and takeaway orders until 11pm has been a blow to his business which is usually open from 5pm–5am.

The ban on alcohol sales and the new operating hours have hit alcohol-based premises such as pubs and bars particularly hard. Many of them have closed temporarily until the government relaxes measures.

One seafood restaurant owner said sales during this period had dropped by almost 80% but she was still managing to pay salaries to her 5-6 employees.

Her strategy to stay afloat is to maintain the quality of the food she provides, making sure that every dish is fresh, clean and tasty and the service is good ... while praying that everything returns to normal quickly.

Restaurants, large and small, have turned to home delivery services to sell their food online but the high fees charged by those services -- as much as 35% of the bill -- are eating away at their already low profits.

Many restaurants selling food on those platforms say such high fees leave them with almost nothing but they dare not increase their prices for fear of their customers turning their backs on them for good.

Home delivery services say business has shot up by at least 30-40% during this latest Covid wave, particularly in strictly controlled provinces.

In June 2020, the cabinet approved measures to regulate food and online delivery services after customers complained about their charges during the lockdown imposed in the early days of the pandemic.

New price controls will come into force on July 4 and will be reviewed again after one year. The aim is to prevent delivery services from exploiting restaurants and customers and setting unfair prices.

Some consumers complained that home delivery services had increased their service fees for restaurants from 20% to as much as 40%.

The Trade Competition Commission has now warned food delivery services they could be fined if they continue to charge for services at unreasonable rates.

Covid-19 will become seasonal and vaccination should be annual for vulnerable people, while mRNA vaccination produces more complications than earlier introduced vaccines, according to a prominent virologist.

BURI RAM: Five boys have been charged with armed robbery and illegal possession of firearms after a roadside shop was robbed of 2 kilogrammes of kratom leaves in Nang Rong district.

ISTANBUL: A powerful 7.8-magnitude earthquake hit Turkey and Syria on Monday, killing dozens, levelling buildings while people were still in their sleep, and sending tremors that were felt as far away as the island of Cyprus.