in demand: Medical personnel attend to a Covid-19 patient at the intensive medical unit at Thammasat University Hospital, which has also opened a field hospital at the university's Rangsit campus.

Thammasat University Field Hospital, which opened in early 2020 when the first wave of coronavirus hit the country, is on 24-hour alert to receive further admissions as hospitals spill over during this far more deadly third round of infections.

Prof Surapon Nitikraipot, chairman of the Executive Committee, Thammasat University Hospital, who was behind the setting up of a field hospital at Rangsit Campus, spoke to the Bangkok Post recently about the facility and its role on the frontline.

He began with a reassuring prediction that the number of new cases in the country would gradually fall to a more comfortable three-digit daily figure before mass vaccinations begin to rid Thailand of the virus altogether.

"Thammasat University Hospital believes it is ready. We have been able to admit all patients within 24 hours and, so far, 700 of the 1,000 that have been cared for have made a full recovery," he said.

He had been told that the latest wave cases was brought on by strains of the virus believed to be more contagious and deadly than previously, and this was why capacity had been increased in preparation.

The field hospital is at a dormitory building in Pathum Thani's Klong Luang district and provides care mainly for Covid-19 patients in Bangkok and the vicinity.

Thammasat University first opened the facility in late March 2020 for two months until the threat appeared to subside. It later reopened for two months in January, and then again in mid-March after a mini-hiatus before cases from the third wave began to mount.

"We were the first field hospital in Thailand," the chairman said.

"It was set up during the start of the pandemic when people panicked over the Covid-19 situation in Italy and England. The pandemic killed a lot of people in those two countries at that time.

"There were a few thousand Covid-19 patients in Thailand then, but there was a shortage of equipment and medication to treat them.

"More importantly, there were no beds for Covid-19 patients in need of treatment in negative pressure isolation rooms of which there were less than 100 in the country."

The "service apartment style" 14-storey building can hold 308 patients, each with their own room complete with air conditioning, a TV, en suite bathroom and CCTV monitoring.

During the second wave which started in Samut Sakhon, the field hospital admitted 200-300 patients -- almost 70% of whom were from Myanmar.

Like other places, people who worked and studied at the campus protested against the field hospital at first, but the rancour gave way to pride once they saw the good that was being done and the positive impact their university was making in the midst of a global tragedy.

"The truth is that no one in Thammasat University has contracted the virus from the hospital," Prof Surapon said.

"I think we've already passed the peak of this third wave which has seen us reopen for another month so far.

"The prime minister and high-ranking public health officials told us that our field hospital was the best."

As for Thammasat University Hospital itself, it remains focused on treating patients with moderate to severe Covid-19 symptoms.

"Once they are on the road to recovery, they are transferred here," he said. 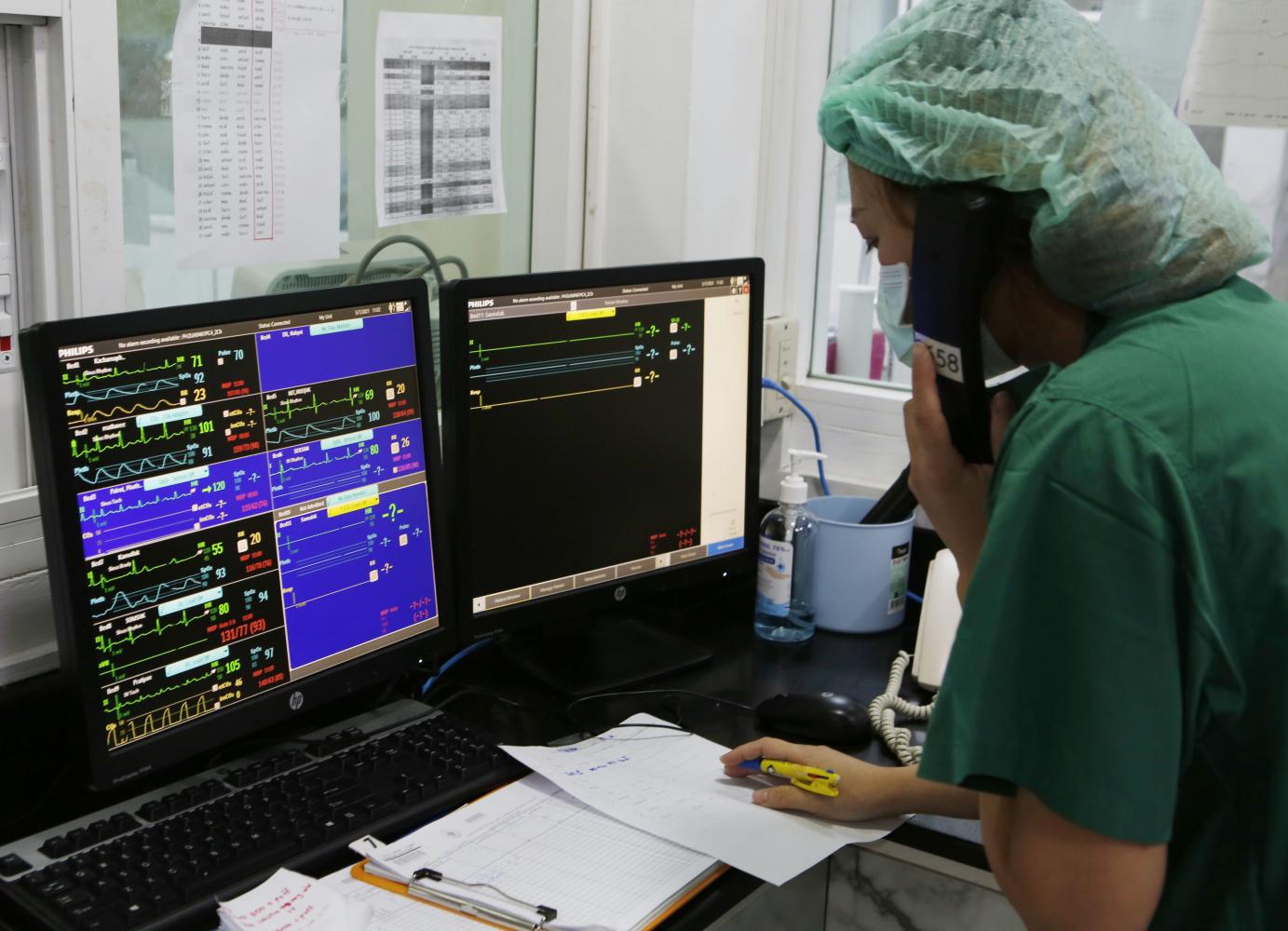 in demand: Medical personnel attend to a Covid-19 patient at the intensive medical unit at Thammasat University Hospital, which has also opened a field hospital at the university's Rangsit campus.

There are currently around 170-180 ICU rooms with negative pressure environments across Bangkok and the vicinity.

Although ICU cohort wards have been set up for Covid-19 patients, the risk of them becoming overwhelmed is high, the academic said.

Thammasat Hospital has had to double the number of negative pressure rooms in its ICU from 15 to 30 as the disease has been progressing faster with a higher fatality rate this time.

It has also simplified its patient transfer system as the virus now appears to progress much more quickly with lung inflammation sometimes being diagnosed after just 3-5 days.

"Under the old system, it took two days to send a patient to a new hospital," he said.

"We can now receive a patient on the same day after we have been contacted.

"Almost 30 hospitals in Bangkok have transferred recovering patients to us."

When asked about the cluster of infections currently ripping through Klong Toey, Prof Surapon said he hoped that a field hospital near the area's port might help bring the situation under control.

He expected the number of infections to top 2,000 once proactive screening is completed.

"Thammasat University Hospital was asked to increase its critical care capacity for Covid-19 patients in Bangkok by the Ministry of Higher Education, Science, Research and Innovation, but we simply don't have the space at the moment," he said.

"The hospital is already looking after far more patients than it was ever designed to treat."

The hospital has 77 beds for critical and semi-critical Covid-19 patients which Prof Surapon said are almost always filled now.

The field hospital, which has been expanded to 470 beds, is no different.

"We boosted facilities at the hospital last year, so now we have two more ICU negative pressure wards," he said.

"Each has eight beds."

And with more ICU staff, the hospital can treat patients in the first chamber immediately, he said, but admitted the hospital's doctors and nurses are already overstretched.

The new ICU wards at Thammasat University Hospital were inspected by the Centre for Covid-19 Situation Administration on April 30.

"If the Public Health Ministry can provide more staff for us -- from any other hospital or university, we can open new ICU wards immediately," he said.

Despite Prof Surapon's confidence in the ability of the public health system to cope, he expressed concern over the recent increase in critical patients and slower overall recovery rate of patients compared to the second wave.

The chairman, however, said he was still confident the pandemic would not worsen, judging from the number of recovered patients.

"The number of patients whose symptoms have deteriorated is just 10% while the number of those who have fully recovered is a lot higher," he said.

"Please believe in our ability to keep Covid-19 under control."