Govt's virus response needs to get better before any snap poll

Talk about an early general election was spurred last week after Prime Minister Gen Prayut Chan-o-cha told cabinet ministers to speed up their tasks as the government had about one year left in office. He also told them to be prepared to hand over the work to the next government.

His remark that the government had "one year" left fuelled speculation that a House dissolution could be on the cards given the fact the government still has one year and 10 months to go before its four-year term runs out in March, 2023.

The speculation also followed reports of conflicts emerging among parties in the government's coalition.

The Bhumjaithai Party, which oversees the Public Health Ministry, is upset that Gen Prayut is calling the shots on the Covid-19 response after the cabinet granted him temporary powers to enforce 31 laws relating to the handling of the pandemic, dimi­nishing the role of its leader and Public Health Minister, Anutin Charnvirakul.

The Bangkok Post asked politicians, academics, and civil groups about their views on the chance of the much-talked early poll which could see the return of Gen Prayut to power. 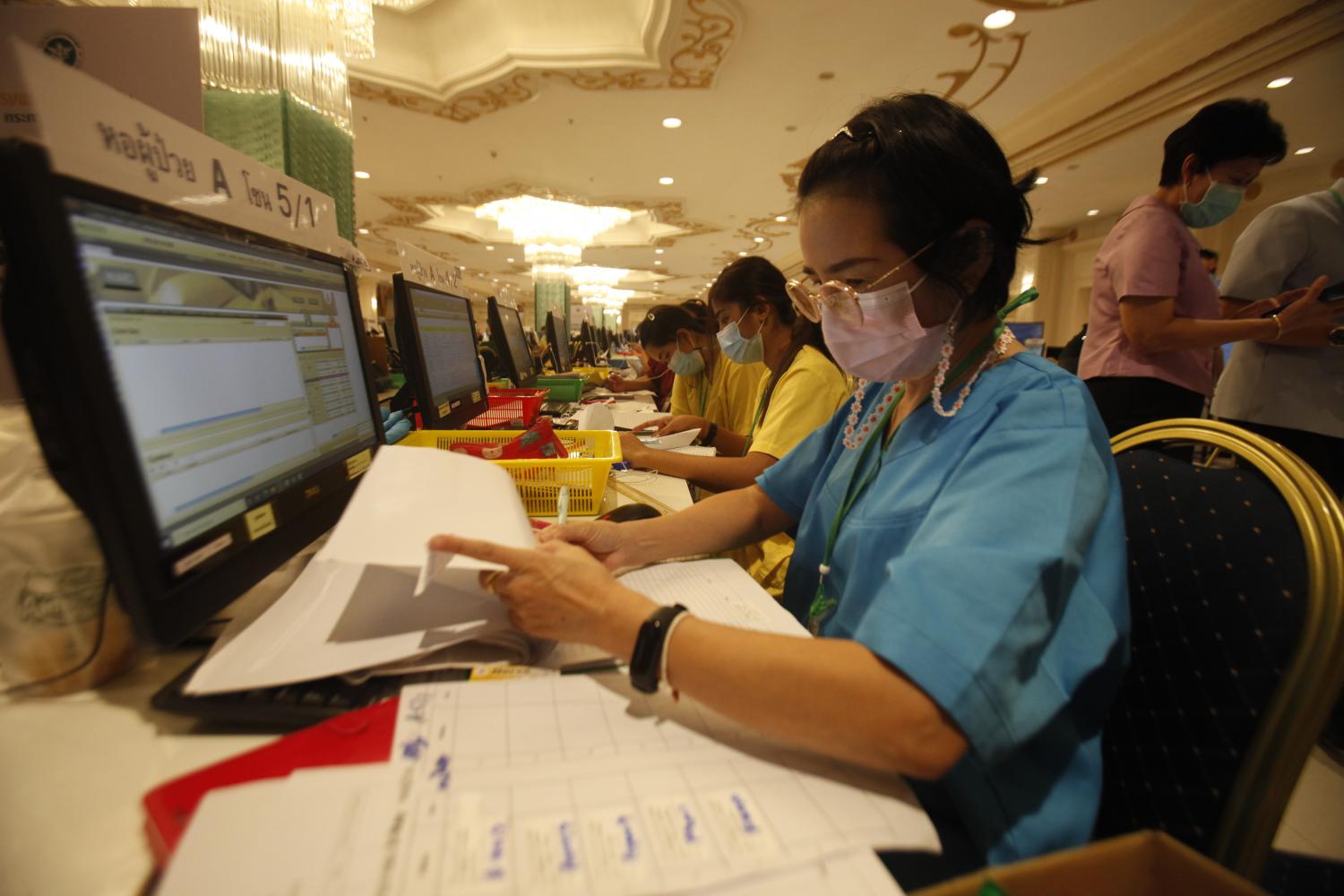 GETTING WITH THE PROGRAM: Medical personnel at Busarakam Field Hospital at Muang Thong Thani of Nonthaburi update the database of Covid-19 patients.

A source in the ruling Palang Pracharath Party (PPRP) said political parties are not taking any chances and have already begun preparing for elections.

Veteran politicians do not think the government will complete its four-year term. The government is expected to hang on for another year before a snap election is called, said one source.

"In a normal situation the government would have been long gone," he said.

Whether or not Gen Prayut will return to power depends on the charter amendment process and the popularity of the PPRP at the time.

In his opinion, the PPRP will have a tough task to win a majority of seats to form the next government. It is expected to form an alliance with a new political outfit, Ruam Thai Sang Chart, formed in March this year.

The new party has attracted public attention as a PPRP alternative or "spare party" to help increase the the PPRP's prospects of winning many MP seats.

According to the source, there is a possibility the PPRP's prime minister candidate could be someone else as people are getting weary of Gen Prayut.

"People are getting tired of those in power, and we have to wait who will emerge as the candidate," he said.

A source in the Democrat Party dismissed Gen Prayut's remark as nothing but an attempt to get cabinet ministers to speed up their work because the government has reached its half-term mark.

He saw no reason for the prime minister to call a snap election at this time or even after the budget bill for the 2022 fiscal year was passed by parliament.

Even though the PPRP was deemed to have an edge over other parties, at this point there was no guarantee the ruling party would win a mandate to form the next government, the source said.

"What if the Bhumjaithai Party won the elections or won more seats and had more negotiating power? There are a number factors to consider and he just can't rely solely on the senate's support and go for a House dissolution," he said.

He admitted that without public pressure the proposed charter amendment seeking to remove the senate's power to select a prime minister is unlikely to pass parliament.

If the issue is not fixed ahead of the next poll, Gen Prayut's chance of returning to power remains high. Moreover, Gen Prayut's popularity in the provinces is not that bad thanks to the government's financial relief schemes, according to the source.

A source in coalition party, Bhumjaithai, said its MPs' criticism of proposed budget spending was also a tell-tale sign of tensions in the coalition which started bubbling with cabinet's decision to transfer wide administrative powers under 31 laws to Gen Prayut to handle the third wave of the Covid-19 pandemic.

Stitorn Thananithichote, director of the Office of Innovation for Democracy at King Prajadhipok's Institute, said Gen Prayut had used the threat of House dissolution to keep the coalition partners in order.

The passage of the budget bill and the 500-billion-baht loan decree indicated the coalition government remained largely intact, he said, adding that as soon as the Covid-19 pandemic eased and economic rehabilitation was under way, the coalition partners would "behave" themselves.

He believed Gen Prayut's goal was to stay in power until 2027 and that he had backup plans to fall back on. Gen Prayut's political support would grow further if he put more effort into tackling corruption and involving the public in public policy, he said.

Mr Stitorn also said the PPRR would need to win only 140 House seats, not as many as 250 seats as some believed, at the next election to form a government. The PPRP's wins in by-elections suggested the party had grown stronger and could lure more politicians to defect.

Wanwichit Boonprong, a political science lecturer at Rangsit University, agreed that tensions in the government would be defused if the government could better manage its vaccination programme.

He said the prime minister's remark would only encourage potential candidates to join the PPRP, pointing to the recent defection of former Pheu Thai member Ruangkrai Leekitwattana to serve on the budget scrutiny committee under the PPRP's quota.

He insisted the House dissolution would take place when the PPRP had a political edge.

According Mr Wanwichit, the appointment of Capt Thamanat as the PPRP's secretary-general would be needed to achieve that goal even if he had a troubled past.

Nimit Thian-udom, from the Welfare Watch Network, said the House dissolution threat was only to show the premier had leverage. Based on the political situation he believed Gen Prayut would return to power.

He suggested that parties should put more thought into income guarantees and payments to the pension fund to lure support, saying it was the next best thing after the universal healthcare scheme.