Thirty years after the deadly blast at a chemical storage venue at Klong Toey Port, the recent explosion at a plastic pellets factory is a wakeup call that Thailand's laws to regulate hazardous substances have not improved much from three decades ago, academics say.

They urged the government to strengthen the enforcement of industrial regulation, environmental protection, and city planning laws to ensure proper protection, or such tragedies could happen again.

The shockwave from the blast destroyed the factory and shattered the windows of houses and buildings in a two kilometre radius. Some 40 people were injured and one firefighter killed in the effort to extinguish the flames. 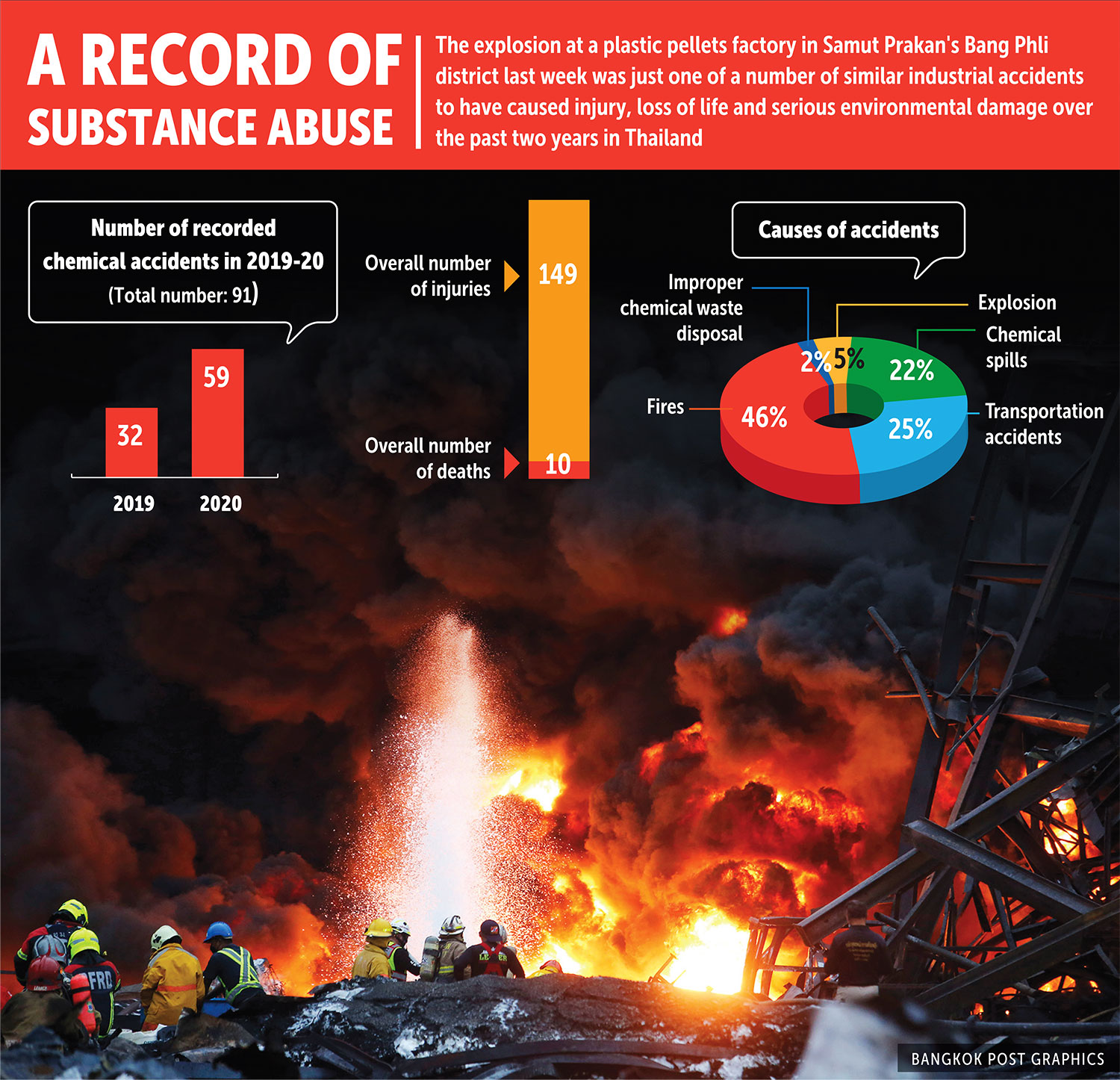 Over 600 tonnes of a hazardous styrene monomer, stored in the factory, leaked into the environment, or burned in the blast, contaminating water sources and releasing a large plume of toxic air pollution into the atmosphere. People in a five-kilometre radius were evacuated.

A chemical reaction is thought to have caused the blast. Sonthi Kotchawat, an environmental expert, said many loopholes and weak enforcement of environmental protection and city planning laws are also factors behind the incident.

Mr Sonthi said while the factory opened long before Samut Prakan's city plan was enacted, the fact the area around the factory was designated as a high density commercial and residential zone shows the city plan was carelessly done, as it did not take the safety of people and the environment into account.

Moreover, he said the factory also benefits from legal loopholes and weak regulations that allow it to store large amounts of hazardous chemicals at its site close to dense population areas without having proper safety equipment in place.

"Ming Dih Chemical was also able to renew its licence and expand its operation without having to do an Environmental Impact Assessment (EIA), because the factory is classified as a plastic pallets factory but not a petrochemical industry.

In that way it can evade the EIA process required by the Ministry of Natural Resources and Environment," he said.

Penchom Saetang, director of Ecological Alert and Recovery-Thailand (EARTH), said the chemical explosion at the Ming Dih Chemical factory resembles the chemical storage blast at Klong Toey Port on March 2, 1991, which also caused extensive damage to nearby communities and severe toxic chemical contamination that led to serious illnesses among locals.

"Even though some aspects of the environmental protection laws have improved since three decades ago, the explosion at Ming Dih Chemical is clear evidence that our laws and their enforcement are not good enough," Ms Penchom said.

"The National Environment Board must scrutinise the incident closely, because the whole of Samut Prakan province is designated as a pollution control zone, which means strong enforcement of environmental protection laws. Yet this accident was still able to happen."

She also highlighted a problem over transparency in the regulation of hazardous industry and substances, as it was still unclear how many dangerous chemicals were stored at the factory.

"The Industrial Works Department must clarify this to the public, as this information is crucial to assess the situation and allow staff to deal with the fire and chemical leakage," she said.

"This is why we need a PRTR (Pollutant Release and Transfer Registers) law, as industries will be bound by this law to declare their movement and management of hazardous substances as well as the amount of pollution released from their factories. That will not only ensure transparency in the supply chain but also help tackle industrial pollution problems."

Somnuck Jongmeewasin, research director with EEC Watch, said environmental protection and industrial regulation laws have weakened since the military coup in 2014. Meanwhile, new laws and regulations have been enacted to make it easier for many polluted industries to invest.

"The issue of weak environmental protection and industrial regulation laws has led to many chemical accidents over the years, especially in industrial zones in the eastern seaboard provinces," Mr Somnuck said.

He said the government must refocus its economic development plan from promoting investments in heavy and polluted industries toward businesses that are more suitable for the country, based on a Strategic Environmental Assessment (SEA) of each area.

He said authorities should conduct an SEA study for every region to evaluate its economic potential based on local natural resources. Choosing the most suitable policy for each spot that can ensure sustainability and benefit local people.

The City Plan should also be adjusted to align with the SEA study to promote stronger protection for the environment and people's wellbeing, he said.

While industry is still essential for economic development, he said there must be a transparent system such as PRTR to ensure industrial operators observe high standards of environmental protection and safety guidelines.

Every hazardous substance must be properly managed in the production cycle.

Many laws involving hazardous substances are still weakly enforced, he said, while the act mentioned above does not include any penalty for violations.

He said the Ministry of Natural Resources and Environment is working on an amendment to include a penalty for polluters.

"A full investigation into this incident is needed to find who is responsible. We cannot just compensate the victims and be done with it. We must find the culprits and bring them to justice," he said.

Regarding calls from academics and environmentalists to enact the PRTR law, he said a specific law may not be needed to monitor hazardous substances, as Industrial Works Department regulations oversee this issue already.

"We have all the legal tools in hand to protect the environment. We just only need to ensure these tools are used efficiently to ensure environmental and public safety from industry," he said.