Migrants band together in virus fight in hard-hit areas

On the outskirts of Bangkok adjacent to Samut Sakhon, many Covid-19 patients are migrant workers and migrant health volunteers from those communities are playing an important role in helping support local isolation schemes.

Bangkok's border districts such as Bang Khunthian and Bang Bon all connect with Samut Sakhon which houses factories, fishing businesses and the migrants who work in them. Many migrants also live in those neighbouring districts.

Unfortunately for those who become infected, language is frequently a barrier to them getting access to appropriate healthcare and medicines and adhering to isolation rules.

Migrant health volunteers (MHVs) are people from their own communities who are helping to bridge the gap. 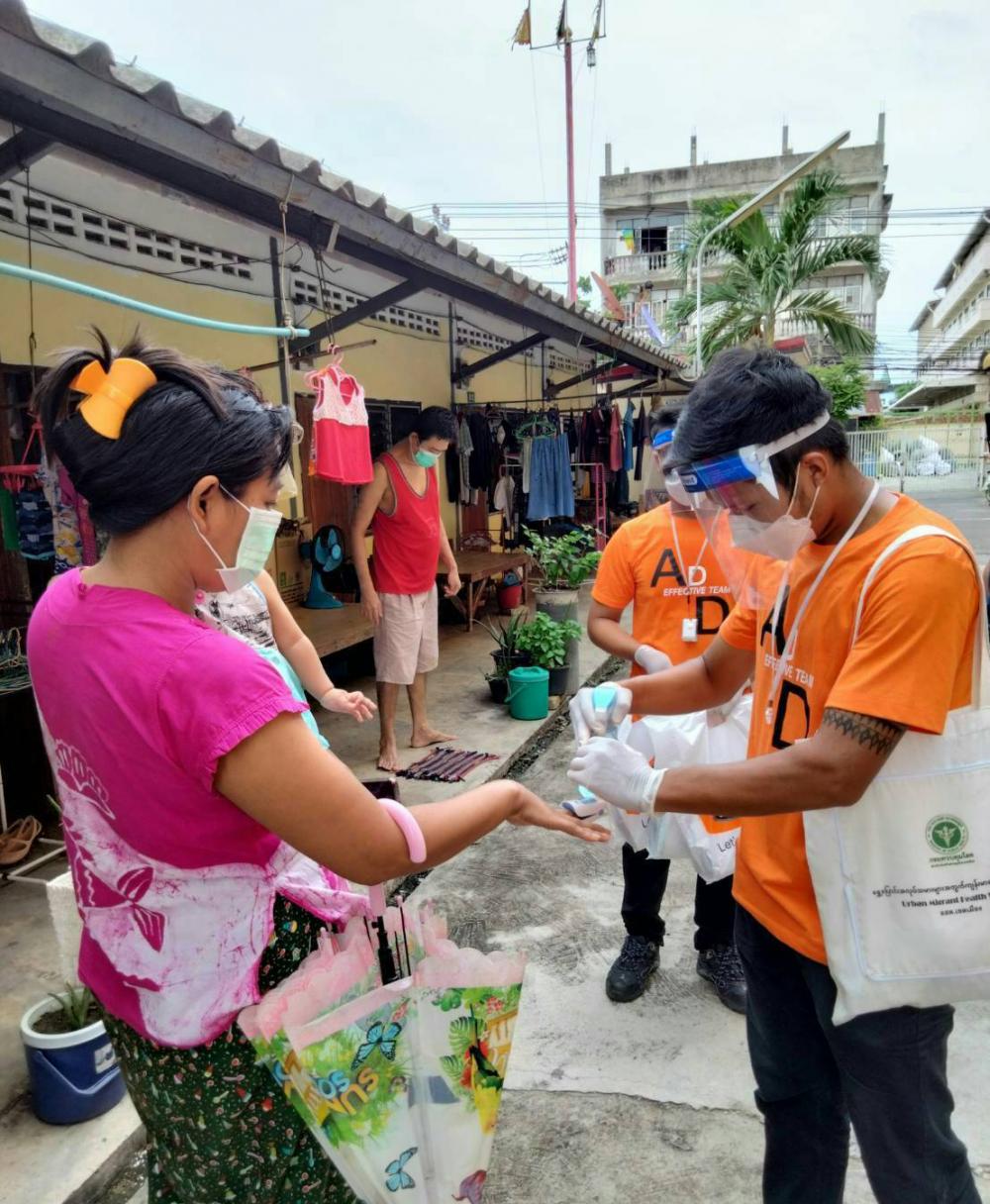 above and below Migrant health volunteers visit migrant workers who have contracted Covid-19 and are under home isolation in a community in Soi Bang Khunthian 14. (Public Health Ministry photos)

Dr Panuwat Panket, deputy director-general of the Department of Health Services of the Ministry of Public Health, said the role, which was introduced last month has been key to making home isolation a viable strategy for tackling the virus in local migrant worker communities.

MHVs are selected from migrant workers who can speak Thai. They help health authorities to communicate with patients and make sure they understand and can follow health guidelines when they go into home isolation.

Business operators are also supportive as they are heavily reliant on migrant workers.

Many large factories in Bang Khunthian district have been following the "bubble and seal" epidemic control guidelines and have set up hospitals on their premises to house and treat their infected workers during the mandatory 14-day isolation period.

Adul Niyomdecha, senior head of the Occupational Health and Safety Department at Adda footwear (Thailand) Co, said since early July, the company has proactively tested 3,000 employees and diagnosed about 280, both Thai and migrant, infections.

Mr Adul said that within the Adda factory, there are strict measures to prevent infections. However, about 600 people, many of them migrants living in 40 dormitories and communities in Soi Bang Khunthian 14 have been infected.

In response, the company recruited a number of MHVs from among its workforce to support home isolation scheme in the Soi. 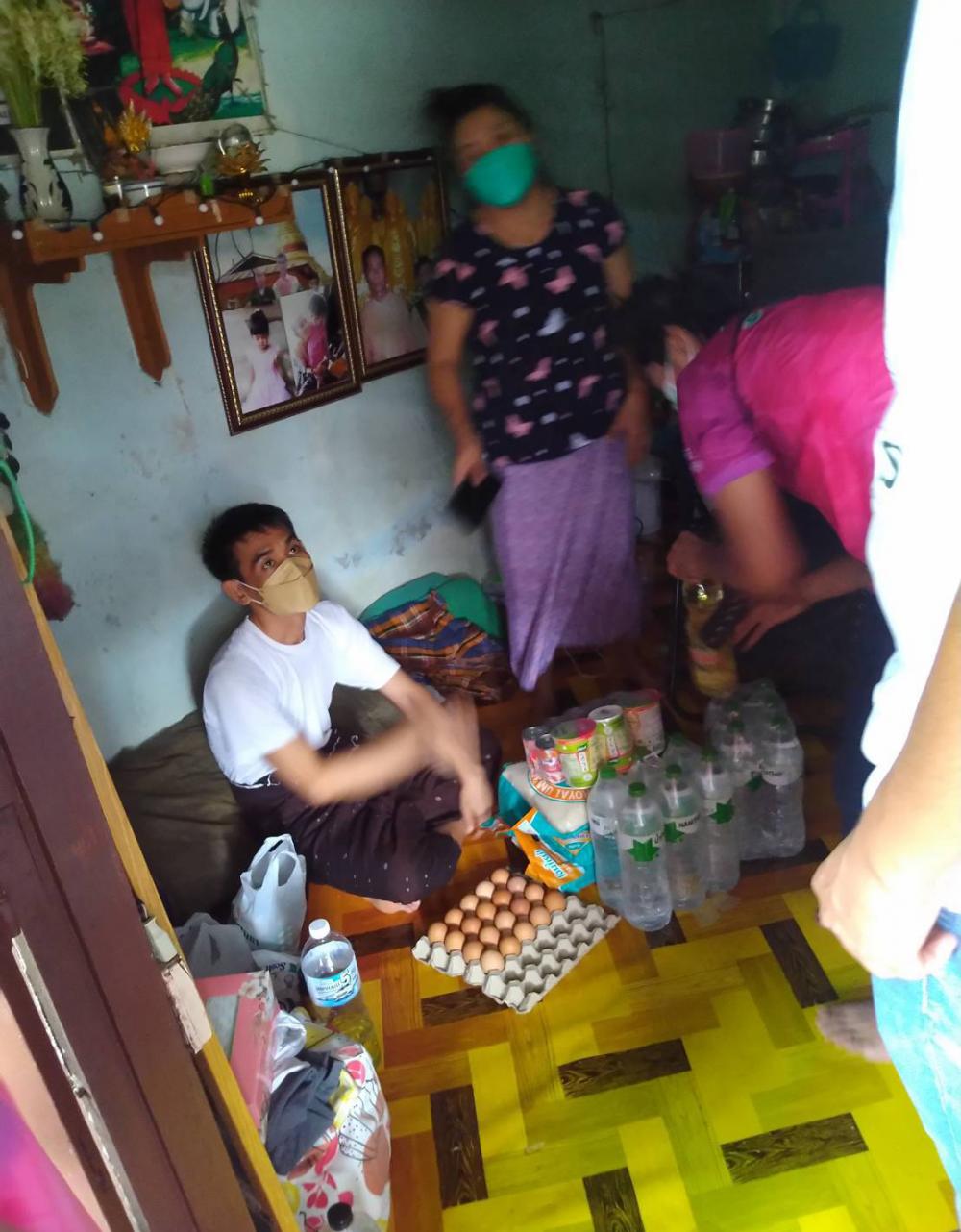 above and below Migrant health volunteers visit migrant workers who have contracted Covid-19 and are under home isolation in a community in Soi Bang Khunthian 14. public health ministry photos

"We allowed 14 migrant workers to work as MHVs full time and support the provision of medicine and healthcare services for their colleagues," said Mr Adul.

MHVs are assigned groups of patients to tend to by area and use Line groups to stay in touch and answer questions from the workers they are responsible for. They visit the communities each day to take temperatures and measure oxygen levels. They also hold their own meetings to report back on the situation in their areas and coordinate directly with professional nurses.

Mr Adul said he is happy with the treatment protocol.

"If treated early on and given the proper medication, infected workers recover quickly," he said.

He added that many MHVs are like mentors, giving advice and giving encouraging talks to their fellow workers.

Saw Ra, a Myanmar national and 23 of his migrant friends, work as MHVs for the Soi Bang Khunthian 14 community.

"Although a little tired, my colleagues and I feel encouraged when we see Thai people and local leaders from various sectors making sure that foreigners are receiving health care. It's the best thing," he said.

He revealed that the group work from early in the morning until late at night, carrying heavy medical equipment on motorcycles to help the sick. He says migrants like himself leave their family behind to work and face the same problems, so when they are sick, they must take care of each other.

Suksan Jittimani, deputy director of the Institute for Urban Disease Control and Prevention, said that MHVs are key to reducing obstacles to treatment and wider contagion.

At present, there are 120 migrant workers serving in various areas, each of whom creates a communication channel for the members of the migrant worker groups they are responsible for. They keep them abreast of the current situation, preventative measures and advise them of requirements such as the need to present formal ID to receive medical care.

Nevertheless, Chuwong Saengkon, of the Rak Thai Foundation, said that many migrant workers are still unable to access the social security and healthcare systems, and rely on informal assistance.

"Unsuccessful efforts [to treat the infected and control the spread of Covid-19] demoralise the MHVs, especially as feel they are unable to fully assist patients," he said.

The Rak Thai foundation believes that mitigating infection rates among migrant workers in close proximity is a matter for the government, and agencies must make more of an effort to create separate zones for infected workers.

HONG KONG: Thailand will face Myanmar, the Philippines, Singapore, and one of Brunei Darussalam and Timor Leste in Southeast Asia's upcoming Suzuki Cup tournament, which will now be held in a centralised venue after organisers scrapped plans to play on a home-and-away basis due to concerns about travel and safety amid the coronavirus pandemic.