Beating back the floods

Rising damp: People living along the Chao Phraya River in Pathum Thani's Sam Khok district move their belongings to a higher floor after the area was flooded.

The influence of the Dianmu storm hitting the country has heightened fears that the mega-flooding that struck the Chao Phraya River basin 10 years ago will repeat itself. That disaster caused damage of over 100 billion baht.

Although many water experts have come out to allay the fears, saying the volume of water in the river basin is much less this year compared to the big flood in 2011, there are many similarities nonetheless.

Despite forecasts that the situation is expected to return to normal in the next three weeks, state agencies are working hard to ensure Bangkok, the economic heart of the country, stays dry. They are using a range of tools to manage the "water traffic" and drain floodwater with the minimum impact possible.

How to save Bangkok

Somkiat Prajamwong, retired secretary-general of the Office of National Water Resources, said tackling the flooding in the river basin is the top goal of water management. Authorities are trying to manage about six billion cubic metres of water in the basin without causing too many impacts on people along the river banks.

Mr Somkiat said that on the eastern side of the river basin, 70% of the water volume will be diverted into the sea through the river, and 700 million cubic metres diverted through Rapheepat canal in Pathum Thani to the Gulf of Thailand in Samut Prakan, and to Nakhon Nayok and Chachoengsao provinces.

Meanwhile, on the western side, the rest of the water is diverted to the Tachin River and water retention areas in Suphan Buri province. Water diversion to the sea is the most urgent task before the sea water starts rising next week.

"Such a level won't have any impact on the inner parts of the capital. Also, Bangkok has built a 79km water wall to prevent flooding, at a height of three metres along the Chao Phraya River, which is a key tool to keep the city safe from the flooding."

According to the Royal Irrigation Department (RID), the key measure to minimise flooding impacts in the lower Central Plains region is holding water in major rivers by constructing hardware solutions such as dams or reservoirs.

But in the case of the Yom River, dams are an unlikely option at the most suitable site of Kaeng Suea Ten in Phrae, due to strong protests from locals. The Department of Royal Irrigation is now looking at other options.

Chalermkiat Kongwichienwat, deputy chief of the RID, said the Yom River has no dam to control the river flow, so the department plans to build at least 20 small reservoirs in Phare to store around 100 million cubic metres of water.

Other tools are also needed to control the river flow. The department also plans to add an additional 11 water sluice gates and dykes along the river in Phrae, Phitsanulok and Sukhothai. Staff have also prepared large-scale paddy fields in the upper North to store water from heavy rain, including at Bang Rakam in Phitsanulok.

"The dams are not a perfect answer for managing water amid concerns about climate change, which usually leads to more rain in the case of Bhumibol Dam, but where the water storage level in the reservoir is still low. So, we move to a smaller-scale reservoir," he said.

For lower-lying areas, the department is building a 22.5 kilometre bypass canal to cut off water running into Ayutthaya, where progress is around 40% complete. The so-called Bang Ban-Bang Sai project, worth 21 billion baht, is expected to be completed by 2026.

Another project is the 200km Chainart-Pasak canal, which will increase water flow from 200 m³ to 900 m³ to the Gulf of Thailand. The 100-billion-baht project is now in the process of detailed design, with construction expected to start in next three years and be complete in 2026. 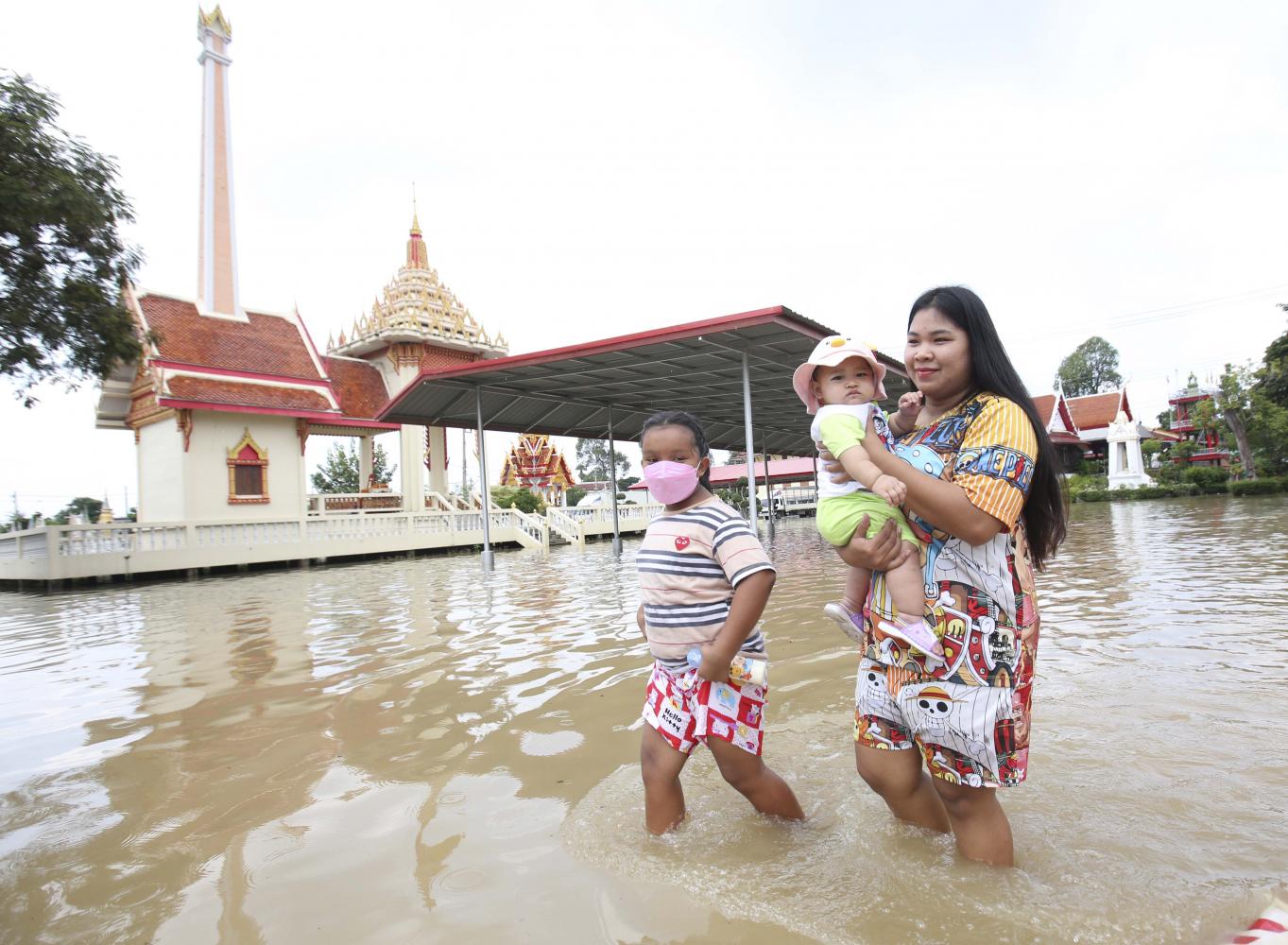 In search of a bit of dry: A family walks in the floodwater at Wat Sakae in Sam Khok district, Pathum Thani. The water in the Chao Phraya River has risen, flooding the temple ground.

Seree Supratid, director of the Climate Change and Disaster Centre of Rangsit University, said climate change has altered the pattern of rainfall, causing many dams to dry out even in the rainy season. Some dams are also unable to prevent the flooding should heavy rainfall enter and they be forced to release surplus water.

Mr Seree said hardware construction is not the best answer to climate change, because a flexible tool is needed to deal with unexpected patterns of rainfall. For example, water walls may not help, but in fact pose obstacles to the drying out a city.

"A basic solution like a soil-made wall seems to be a more flexible answer in some areas," he said.

Regarding the amount of rainfall this year, he said the country is also coping with the influence of the La Nina weather phenomenon which is contributing to a prolonged rainy season and more tropical storms approaching Thailand.

As a result of climate change, the amount of rainfall is expected to increase two or three times higher than the current average, while droughts will also worsen.

"This is the reason why we need a more flexible policy to deal with flooding and droughts," he added.

At least 1.38 million rai in 19 provinces were flooded by the storm.