Firms can cater to domestic visitors first if foreigners hold back

Skies will light up again: The Pattaya International Fireworks Festival is scheduled for Nov 26-27. Every year, fireworks are set off around 8pm from boats not far from Pattaya Klang beach.

When Pattaya joins Bangkok, Chiang Mai and 12 other destinations in welcoming back fully vaccinated tourists without the need for quarantine next month, the town will finally return to full throttle.

Closed for almost two years, the resort town will restart its tourism sector with major events in November and December including its signature Pattaya Music Festival, Pattaya International Fireworks Festival and Pattaya Countdown to round off 2021.

Pattaya was originally scheduled to restart its tourism sector under "Phuket Move On" on Oct 1, but the Centre for Covid-19 Situation Administration (CCSA) decided to push it back to Nov 1.

It was the third postponement since the initial reopening was announced for mid-September, all attributed to a vaccine shortage.

While admitting that these activities are primarily designed to draw domestic tourists, Sonthaya Khunpleum, Pattaya City mayor, is now optimistic that more foreign visitors will arrive in the last two months following the easing of virus curbs.

Starting yesterday, the government has shortened the night curfew to 11pm-3am and allowed shopping malls to resume normal service hours. It also plans to further relax Covid-19 restrictions in December by lifting the ban on serving alcoholic beverages in restaurants and allowing entertainment venues to resume operations on Dec 1.

Pattaya will kick off the reopening the Pattaya Music Festival in the first two weeks, followed by the Loy Krathong festival in the third week and Pattaya International Fireworks Festival.

"The events are planned to cater to Thai travellers, but with the latest relaxations of the virus curbs, we expect to see more foreign arrivals too," he said.

Mr Sonthaya said the Covid-19 situation has forced the business community to shift their focus from foreign travellers during the high season to Thai visitors.

Pattaya hopes to attract 200,000 foreign tourists each month during the high season in the first phase of reopening, according to the mayor.

Before the pandemic, the city welcomed around 1 million foreign tourists each month.

However, Mr Sonthaya said the pandemic has also prompted a rethink in the local tourism industry.

"Local tourists make up one-third of visitors, so adjustments will be made to tourism planning. The industry needs to be resilient and can shift to Thai tourists if an emergency strikes," he said.

Rattanachai Suttidechanai, chairman of the Pattaya Business & Tourism Association, said even though no quarantine is imposed, foreign tourists are required to undergo virus screening and will have to travel in the designated Blue Zone in their first seven days.

However, foreign travellers must register in advance with the Ministry of Foreign Affairs and specify the destinations they want to visit in the first week to get travel authorisation, he said.

According to the Centre for Covid-19 Situation Administration (CCSA), in the "Blue Zone," people can travel freely and businesses and activities can operate normally, under the control of the provincial communicable disease committees.

Activities that draw large crowds can be held with no more than 500 people, while pubs and entertainment venues are to remain closed.

For greater ease in handling of various documents including immigration forms and vaccine certificates, the Ministry of Foreign Affairs will introduce the "Thailand Pass" system to replace the CoE adopted for travel authorisation.

Mr Rattanachai said a command centre will be set up to oversee the reopening programme with the private sector, health authorities and Pattaya City working together and providing a weekly report to the CCSA to ensure proper measures are taken if virus infections creep up.

Ray of hope for nightspots 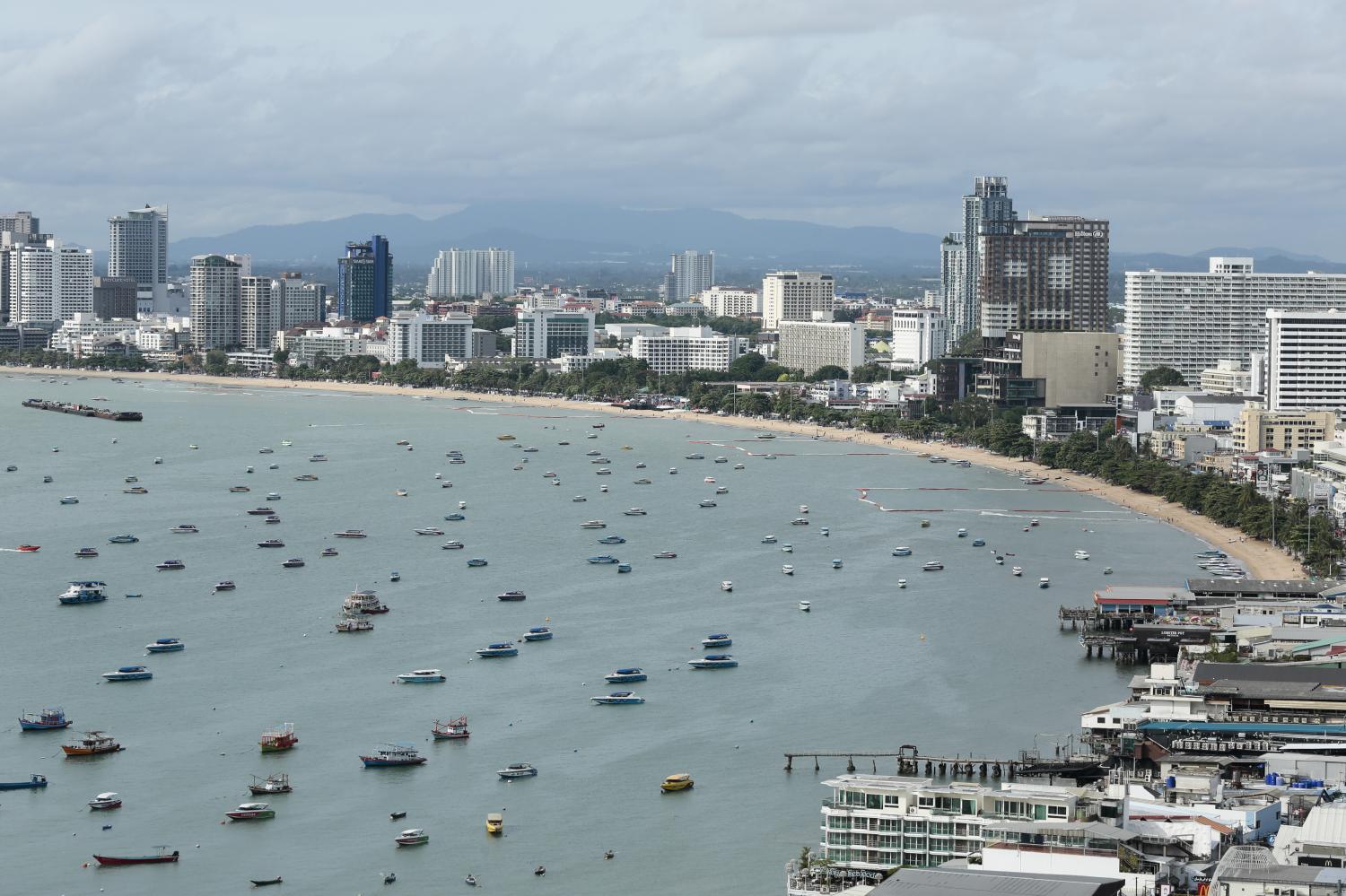 Damrongkiat Phinitkarn, secretary of the Entertainment & Tourism Association of Pattaya City, said a sense of optimism is keen in the sector after the government announced the Nov 1 reopening.

He said entertainment businesses are the first to be shut down and the last to reopen when lockdowns are imposed. Big entertainment venues negotiate with their landlords to reduce rental fees during the shutdown as they bide their time for the reopening.

"We're starting to see the light especially when the quarantine and the booze ban are to be lifted. Business people are preparing to go about their business again," he said.

For entertainment venues to survive, Mr Damrongkiat said four restrictions have to be lifted: curfew, quarantine, the booze ban and the emergency decree.

Lifting the emergency decree can be an incentive to many tourists who are required to buy travel insurance, he said, adding that travelling to countries where an emergency decree is in effect costs extra.

Een better is when countries of origin allow their people to return without undergoing quarantine.

"It all comes down to costs for tourists. I've talked to some and they're willing to return if Thailand lifts the quarantine requirement. Two quarantine programmes here and back home drive up their cost by 100,000 baht," he said.

He played down concerns about a possible influx of workers from other provinces which could lead to high virus infections.

Under the reopening scheme, only vaccinated travellers from low-risk nations can visit without quarantine. Initially, 10 nations including China, the United States and Germany qualify but more could be added to the list.

Yang Xin, the minister counsellor of the Chinese Embassy in Thailand, said China is ready to discuss with Thai authorities the reopening programme after China was mentioned as one of the low-risk countries, with vaccinated people allowed to visit the kingdom quarantine-free.

Amporn Kaewsaeng, a 49-year-old pub owner who has run entertainment venues in Pattaya Walking Street for 18 years, is full of optimism following the Nov 1 reopening announcement.

Since the Covid-19 pandemic started early last year, her businesses are more closed than open and she hopes there will not be another wave of the outbreak.

"I hope there is no fifth wave because we'll have nothing left. The latest outbreak hit us really hard. We've set our rules to help prevent the virus from spreading. Full vaccinations are needed for staff and customers," she said.

Ms Amporn said she had dozens of Thai and foreign staff to take care of during the shutdown.

"I'm pleased about the reopening timeline and we can now plan what to do next," she said.

Police are also getting into action to help the tourism industry rebound from the pandemic. Pol Lt Gen Sukhun Prommayon, chief of Tourism Police Bureau, said his office is working closely with health and tourism authorities in enhance safety for tourists.

Initially, police will survey unsafe areas and Covid-19 risk areas in each community and put them under surveillance. A list of safety guidelines for tourists in Pattaya and other destinations will be drawn up, he said.

Pol Lt Gen Sukhun said police will work with business operators via what is known as "SHA Plus Manager" initiative.

The manager's role is to ensure compliance with Covid-19 preventive measures such as vaccination requirements for service staff.

Dr Tanarak Plipat, a Ministry of Public Health inspector, said tourists who are fully vaccinated and come from a country with a low rate of Covid-19 infections should pose no cause for concern.

"They could do as Thai people do, and travel with no need for any special regulation, including an ATK test. Their visit doesn't put the country at higher risk any more," he said.

He also said the country's target for inoculations should rise to 80% of the population to match the total number of vaccines the country has at present.

The ministry is developing an application for tourists which will give Covid-19 information, letting them know the intensity of outbreaks in places they visit.