Bright lights beckon: The Giant Swing illuminates as dusk falls around one of Bangkok's landmarks. Preparations have begun for the reopening of tourism on Nov 1.

Nov 1 marks the moment of truth for the much-anticipated reopening of the country's tourism with Bangkok billed as the crown jewel of the sandbox scheme amid calls for practical measures to make it work.

Tourism businesses are counting down to the day when they can reopen their doors to fully-vaccinated overseas visitors.

These visitors fall into two categories: those from low-risk countries exempt from quarantine; and individuals from non-exempt countries, whose travels are restricted within the sandbox area for seven days during which they must reserve rooms at the SHA Plus hotels.

The quarantine-exempt visitors must wait for the RT-PCR test results at a hotel for one night or until the test result turns out negative.

Those from non-exempt countries must await their RT-PCR test results at the designated hotels before setting off on their travels.

However, visitors from non-quarantine exempt countries arriving via the country's international airports also must join the sandbox programme.

Bangkok is one of 17 provinces where double-dosed visitors from 46 low-risk countries can visit with no quarantine requirement on Nov 1.

However, the capital is also looking to welcome arrivals from outside the 46 countries under the Bangkok sandbox programme which was discussed jointly by the Bangkok Metropolitan Administration (BMA), the Thai Chamber of Commerce (TCC) and the Tourism Authority of Thailand (TAT).

A source in the BMA said a follow-up meeting has been scheduled for Tuesday where details of the Bangkok sandbox are expected to be finalised.

Stakeholders -- from business owners to vendors based in Khao San Road, a favourite haunt of many foreign visitors -- greeted the Nov 1 reopening with delight.

However, they have cautioned that restoring tourism must not come attached with too many restrictions.

Sa-nga Ruengwatthanakul, president of the Khaosan Business Association, said it was high time the country restarted its tourism engine.

What must be factored in is the reality that many other countries are also reopening their borders to tourists. The better prepared and more resilient countries are likely to get their hands on a slice of the tourist pie first.

"I agree with getting the country back on track. The economy is deep in the doldrums.

"Many owners of three, two-star hotels and guest houses have gone out of business. So have restaurants and entertainment companies. You can imagine what more than a year of closure has done to them," he said.

Mr Sa-nga said the vaccination rate continues to surge with booster shots making inroads. These are indicators of the country's readiness to resume business.

No quick return to normal

Mr Sa-nga said the Nov 1 reopening does not mean an instant rebound to the pre-Covid 19 tourism volumes.

He expected foreign visitors will trickle back in the beginning as their countries have also imposed travel restrictions.

In China, certain areas require up to 21 days of quarantine for foreign nationals, if they are not off-limits altogether.

"We are ready to get back to our trade. Staff at all outlets on Khao San Road have received a double dose. We're at your service," Mr Sa-nga said.

For Khao San Road, Mr Sa-nga put his most conservative estimate of revenue generated by overseas tourists to be around 20 million baht a day before the pandemic.

In the few weeks after Nov 1, he believed the figure would reach one million baht a day as tourists will still be few and far between.

In total, the number of foreign tourists to Khao San will not exceed 500,000 during November and December, substantially down from the 10 million visitors in the same period in a normal non-Covid year.

The association president admitted that not every measure outlined as compulsory would be practical.

For example, the required antigen test for staff and diners who are not fully vaccinated was costly whereas producing proof of a double jab was a lot easier to do.

In Bangkok, most people have received their first dose, according to the TCC. This should at least prevent deaths and make social activities reasonably safe, Mr Sa-nga said.

Turning to the Bangkok sandbox proposal, Mr Sa-nga reckoned it would be no easy task regulating travel as Bangkok borders many provinces.

He said the mandatory double jabs and Covid-19 tests, both before and upon arrival, should form a sufficient defence against infection. These safeguards should ease fears of a return to mass infections post-reopening.

There is no need to launch the Bangkok sandbox, since all authorities have to do is warn visitors which infection-risk areas to avoid, he said.

Mr Sa-nga said he was more concerned about the illegal migrant workers who have evaded tests and other public health safety nets. Recent flare-ups of infections were mostly traced to these workers.

Thai tourists were seldom blamed for spreading the virus because many could be contact-traced through the Thai Chana app, he said.

Surapong Techaruwijit, a former president of the Thai Hotels Association, said everyone is tourism is eagerly looking forward to Nov 1.

They agreed the key to success lies in keeping conditions of entry down to the bare minimum.

"We shouldn't have the fully-vaccinated undergoing test after test, quarantine after quarantine," he said.

Those with double doses who test negative before landing in the country should be permitted to enjoy a holiday free of further tests once they get here, Mr Surapong said.

"The hotel operators are more than ready for reopening. It's been a painful struggle especially for staff, many of whom were furloughed or faced pay cuts," he said, adding the early stage of reopening could see about 50-60% of staff returning to work.

He said he believed people would decide whether to travel overseas based on re-entry regulations in their home country.

They might put their holiday plan on the back burner if their home countries require them to spend long periods of time in quarantine after returning from destinations rated as Covid-19 high risk.

Mr Surapong said he was confident there would be no resurgence of infections after the reopening, citing the Phuket sandbox programme where the virus did not come from overseas visitors but was transmitted among locals. (continue below) 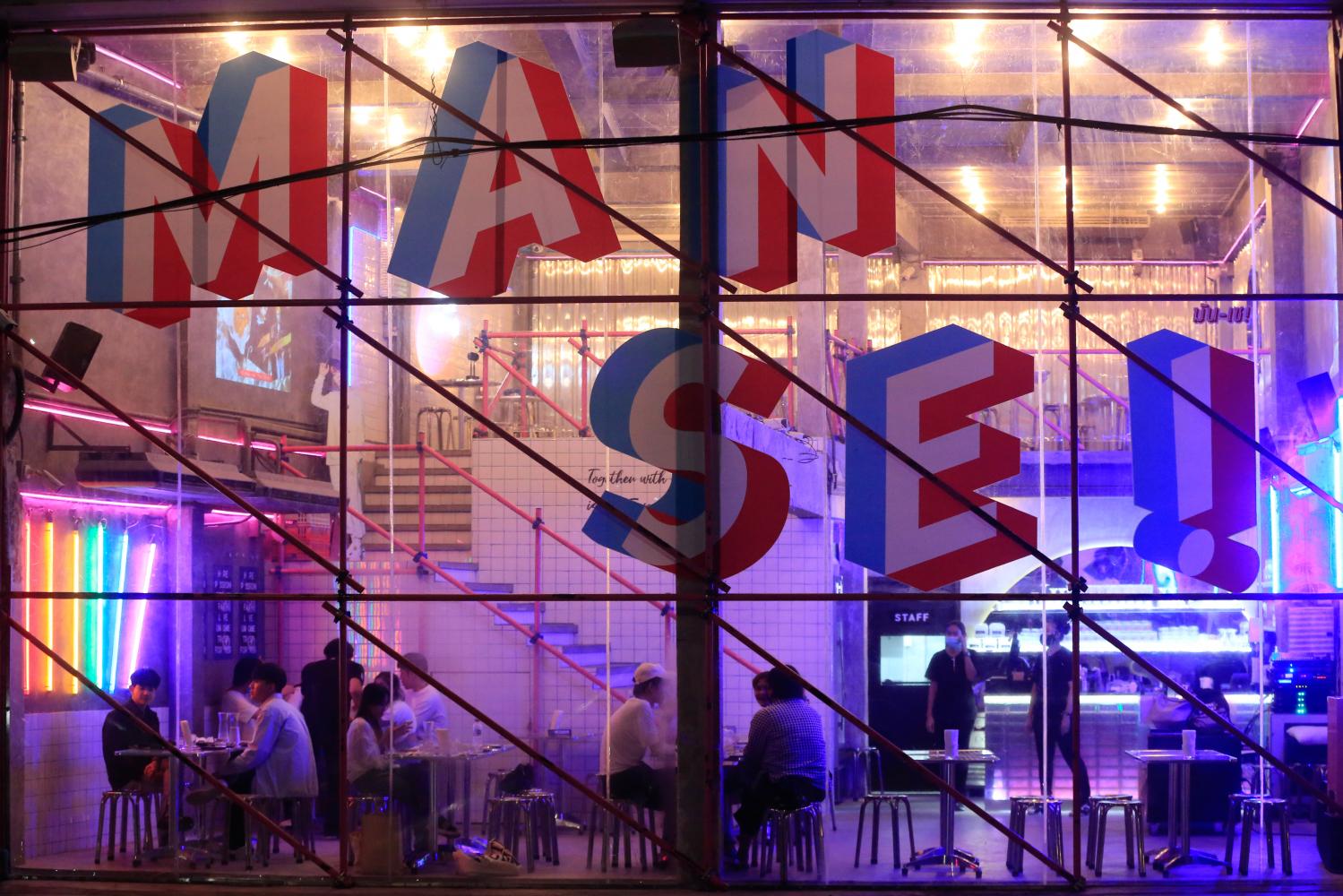 Warming up: A Korean restaurant reopens on Khao San Road after the strip has been empty of customers for more than a year.

Meanwhile, Yada Phonphetrampha, who represents Khao San street vendors, said the government should issue more details about the Nov 1 reopening so people can decide if they want to come and plan ahead.

It was also crucial to explain whether the alcohol ban will continue to apply across the board or in specific areas after Nov 1.

"That is part of getting prepared for the reopening," she said.

The daily caseloads must be brought down in tourism-hub provinces including Bangkok and Chon Buri so people would not be hesitant in making travel plans.

While everyone was upbeat about the Nov 1 reopening, she said some vendor stall owners were still haunted by the "nightmare" when an extension of the emergency decree was declared over last New Year due to a fresh outbreak of Covid-19 in Bangkok.

The stall owners spent a great deal of money buying ingredients for cooking dishes only to see the celebrations abruptly cancelled.

"Some shops and businesses on Khao San Road are reluctant to invest. They don't want to get hurt again," Ms Yada said.

Sanan Angubolkul, the TCC chairman, said the TCC and the BMA will champion the Bangkok sandbox as a model for reviving tourism.

The private sector will play its part by promoting Covid-free settings at companies and wider workplaces through adopting Safety and Health Administration (SHA) Plus guidelines.

In Bangkok, every household member registered in the capital has received their first jab while those with double jabs account for 69% of the population. The numbers are conducive to a tourism restart.

The BMA has appointed a steering committee for the Bangkok sandbox to communicate details of the reopening to tourists.

Employees and officials in various sectors regularly take antigen tests while contingency plans were drawn to counter the resurgence of a major virus outbreak.

The TCC also proposed a stimulus project called "Hug Thais, Hug Bangkok" to be launched in conjunction with the TAT's promotions to spur people to shop and eat out.

"The Bangkok sandbox will put the capital back on track and revitalise the city," he said.

For Panisara Adilapnukul, a 60-year-old traditional Thai masseuse, the thought of serving overseas clients after Nov 1 thrills her.

Working at a spa outlet in Don Muang district, she said the "new normal" is the norm in her profession.

She wears a mask at all times during work, practises social distancing, sprays disinfectant in the massage room and regularly undergoes an antigen test.

"I refrain from talking to customers. That I have to make clear with them," she said.

She and others in the profession have vowed to take every possible precaution to prevent a cluster of infections.

"We need to learn to live safely with Covid-19 so we won't have to suffer from another lockdown," Ms Panisara said.

"Government-imposed restrictions continue to stop a revival of international travel. It remains 70% down on pre-crisis levels.

The ICAO HLCC commitments show that governments understand what is needed to re-start global connectivity. The task now is implementation," said Willie Walsh, director-general of the world's airlines trade association.

Earlier this month, ICAO published recommendations that will help push along the HLCC declaration.

Known as CART 3 (the Council Aviation Recovery Task Force) roadmap, the recommendations include recognition of testing, recovery and vaccination certificates (including digital formats) and entry of fully vaccinated and recovered passengers including alleviating or exempting such individuals from testing and quarantine measures.