Off to a shaky start
Business

Off to a shaky start

Two weeks after the country reopened, the private sector is seeing signs of a tourism recovery despite lower-than-expected arrivals of international tourists.

To help cash-strapped operators back on their feet, businesses are urging the government to lessen entry regulations, further relax Covid-19 curbs and roll out financial packages in a bid to boost the industry.

Hope on the horizon

Marisa Sukosol Nunbhakdi, president of the Thai Hotels Association, said there are positive signs following the Nov 1 reopening and hotel bookings in December and January are expected to increase.

She said tour operators have put together promotional campaigns and special packages to bring in much-needed cash as they clarify entry rules for "Test & Go", sandboxes and mandatory quarantine programmes.

However, she echoed concerns among tourism operators about quarantine requirements which foreign guests have to comply with when returning home after holidays here.

For some countries, Thailand remains a high risk country and people hesitate to take holidays overseas if they have to quarantine upon return to their home countries, she said.

Ms Marisa called on the government to pursue talks with countries which send tourists here over loosening quarantine restrictions. Without mandatory quarantine at home these tourists are more likely to consider Thailand as a destination, she said.

The government needs to implement more measures to help the hotel and travel sectors get back to business, she said.

These include extending subsidy schemes like "We Travel Together" and "Travel Around Thailand" to boost local tourism, reducing costs through tax and utility rate cuts and providing soft loans to cash-strapped businesses.

Ms Marisa said tourism has many layers and the private and public sectors need to draw up a comprehensive tourism development strategy.

Fair competition, health and safety standards, environmental awareness and use of tourism to narrow income gaps are among challenges awaiting the sector, she said.

"Thailand is the first country in Asean to reopen its borders to fully vaccinated international travellers without quarantine. It is a bold move to drive the economy," she said as she urged businesses to maintain discipline and comply with standards under the SHA and SHA Plus programmes to keep infections low.

Pattaya creeps back to life

Rattanachai Suttidechanai, chairman of the Pattaya Business & Tourism Association, said tourism-related businesses in this resort town are coming back to life after enduring the dark days of the restrictions.

Hotels have been booked solid for upcoming events including Loy Krathong this weekend and an International Fireworks Festival which will be held next weekend.

However, about 80% of arrivals in Pattaya are local tourists, according to Mr Rattanachai. Most foreigners are expats who have Thai families here and they enter through the "Test & Go" programme to avoid quarantine.

Fully vaccinated travellers from 63 low-risk nations are required to have an RT-PCR test upon arrival and stay in a hotel overnight for the Covid-19 results, which generally take six to eight hours to process. They are allowed to travel anywhere if the results come back negative.

"This group doesn't want to stay in quarantine. For the leisure market, it is reviving gradually, nothing major," he said.

Mr Rattanachai said economic activities will increase once the Centre for Covid-19 Situation Administration lifts a ban on serving alcohol in restaurants and eateries.

Several business operators have hesitated to reopen and call their employees back to work because of this restriction, he said.

The CCSA has allowed dine-in services with the sale of alcoholic drinks at restaurants passed by the Safety & Health Administration until 9pm in blue zones -- Bangkok, Krabi, Phangnga and Phuket.

He also called on the government to set a timeline for night entertainment venues to resume, saying nightlife operators' frustration is growing especially when they are the only sector that remains closed.

"The night entertainment industry is a lifeline in Pattaya in addition to the travel sector," he said.

On Friday, the CCSA announced that nightlife venues such as pubs will remain closed until at least Jan 16 to avoid a possible surge of infections during New Year.

He said about 10%, or 2,000, of travellers arriving in Thailand since Nov 1 head to Chon Buri and the number is expected to double in the middle of the month.

Mr Kachondej also allayed concerns about insufficient transport services. Efforts are under way to add vehicles that meet the SHA Plus programme and visitors are taken to drive-thru testing before being checked into their hotel to provide them with more convenience, he said. 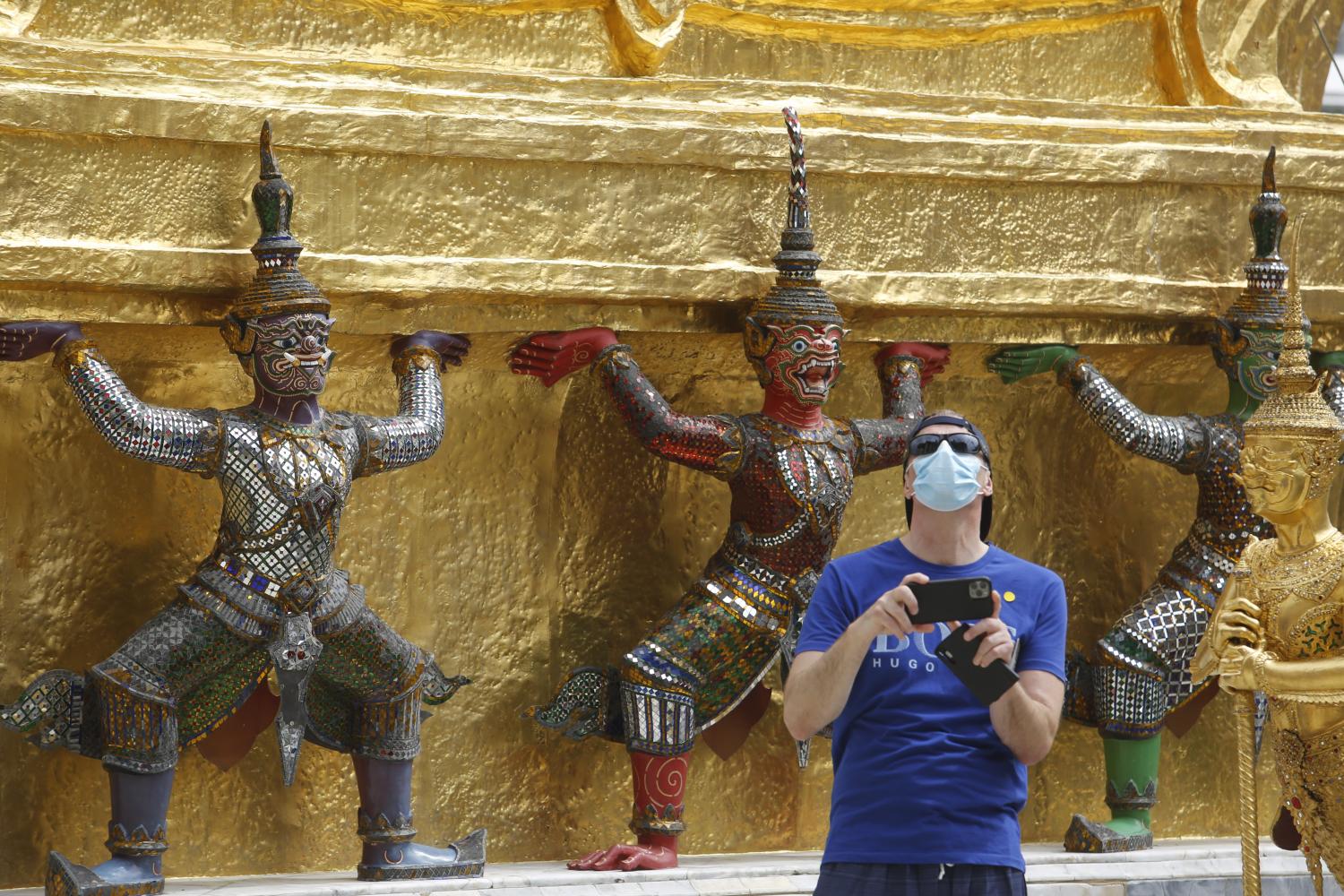 green shoots: Tourists return to popular destinations in Bangkok such as the Emerald Buddha Temple, above, and Khao San Road.

Arrivals in Phuket picking up

Thaneth Tantipiriyakij, president of the Phuket Tourism Council, said the flow of foreign visitors on the resort island has doubled following the Nov 1 reopening.

The Phuket sandbox scheme, which started on July 1, has welcomed about 500-600 tourists per day on average but the province is picking up more than 1,000 visitors following the "Test & Go" scheme.

Mr Thaneth said a rebound is expected as the new entry programme has brought in leisure visitors from Scandinavia, Germany and the UK. Some of those entering Thailand via the sandbox scheme are Thai returnees.

If the entry rules are loosened, foreign arrivals are likely to return in large numbers in December, he added.

The province has also seen a surge in arrivals of local tourists, receiving more than 30 flights with 4,000-5,000 local tourists per day on average. This is not to mention 10,000 more who arrive by land, he said.

The domestic tourism economy is growing due to two stimulus schemes: "We Travel Together", which is hotel subsidy scheme, and "Travel Around Thailand", a co-payment scheme for tour packages, he said.

Kongsak Khoopongsakorn, president of the Thai Hotels Association's southern chapter, said bookings has risen especially during Christmas and New Year where bookings have reached 70%-80% of capacity.

The occupancy rate by foreign guests in December is at 30%, or 300,000 per month and it remains to be seen if the rate increases to 60%-70% when next year's high season arrives, he said.

According to Mr Kongsak, January-April 2022 are likely to be strong with the Thai market dominant.

Nanthasiri Ronsiri, director of the TAT's Phuket office, said the province has generated 3 billion baht in direct tourism revenue during July-September and another 8 billion in related businesses.

She said the TAT's Phuket office has set tourist arrivals at 80,000-100,000 per month but external factors including the global Covid-19 situation can affect the numbers of inbound tourists.

According to Phuket health chief Koosak Kookiatkul, infections have dropped sharply from 200 cases per day on average to 50 but the number may increase after the reopening.

Domestic tourism up in Chiang Mai

Punlop Saejew, president of Chiang Mai Tourism Council, said the northern province is estimated to have lost at least 70 billion baht in tourism revenue from impacts caused by the Covid-19 pandemic and it is pinning hopes on the reopening.

He said while international tourist arrivals after the Nov 1 reopening are lower than expected, overall there are encouraging signs.

A chartered flight bringing in golfers from South Korea reflects travellers' confidence in health and safety protocols in the province which has made preparations for its reopening under the "Charming Chiang Mai" scheme.

With more group tours being arranged for the upcoming high season, he expects the local tourism sector will start to turn a corner. However, in the early days of opening the domestic market will sustain tourism businesses.

According to Mr Punlop, hotel bookings started to pick up in September and October and the rate rose to 35% in Chiang Mai town and to 50%-60% at natural tourist sites during October to early November.

In October air passengers rose to 5,000 per day on average, compared with 1,000-2,000 passengers per day some months earlier.

In the second half of November and in December the occupancy rate for hotels in town is forecast to increase to 30%-40%, and 60% for hotels in natural attractions.

Chiang Mai has also received a big boost as it was chosen as one of the best cities for people who want to work and relax in Holidu's Workation Index 2021, he added.

According to Mr Punlop, public health safety remains the province's top priority and business operators are willing to be flexible if the Covid-19 situation changes. Postponements and refunds for cancellations are allowed depending on agreed terms and conditions.

The aviation sector has also suffered from the pandemic and restrictions, and the reopening scheme has pull factors for the industry that provide vital inks for the tourism industry.

Tassapon Bijleveld, executive chairman of Asia Aviation (AAV), the largest shareholder of Thai AirAsia (TAA), said the reopening scheme is a positive development for the airlines as it brings a positive vibe in the travel economy and business opportunities for the operators.

Thai AirAsia, which operates domestic flights out of Don Mueang and Suvarnabhumi airports, is expected to cash in on growing travel demand providing more domestic services with a plan to resume international operations this year, he said.

The airline has resumed domestic services since September with flights to 23 destinations out of 36 in November. Currently it operates 36 routes more than 60 flights per day and is expected to resume 100% domestic services by January next year.

Top five destinations before the Covid-19 pandemic were Chiang Mai, Phuket, Hat Yai, Chiang Rai and Khon Kaen. However, Mr Tassapon has two key proposals he wants the government to consider to strengthen the reopening policy.

One is how to reduce travel costs for international visitors who are required to take pricey RT-PCR tests before departure, upon their arrival and return, and have health insurance and hotel bookings.

The other is to pursue talks with other countries on making two-way quarantine-free arrangements initially targeting markets in Asean and Asia.

According to Mr Tassapon, such travel agreements will allow Thai tourists to take outbound trips with no mandatory quarantine while enabling Thai airlines to restart flights and break even.

Based on information from Nov 1-10, Aerothai has serviced a total of 9,919 flights: 2,243 international flights, 6,651 domestic flights and 1,025 flights across the country's airspace.