Just a quick check: Security forces take the temperature of a Myanmar migrant who crossed illegally into Sai Yok district in Kanchanaburi this month. The reopening of the country on Nov 1 has seen an influx of illegal crossers.

The easing of the Covid-19 pandemic has sent demand for migrant workers resurging and "MoU-centric" labour imports are back on the table.

However, parties concerned are not confident that importing workers from Myanmar, who at 75% make up the largest slice of the migrant workers' market, will be as smooth as before.

Negotiations with Nay Pyi Taw to renew a memorandum of understanding (MoU) surrounding labour imports changed after the coup in Myanmar in February while the pandemic has also complicated labour import procedures.

Despite those problems, the Centre for Covid-19 Situation Administration (CCSA) agreed this month to apply the MoU as a means of bringing in migrant workers as labour demand is rising with the country's reopening on Nov 1.

The Labour Ministry has come up with an eight-step process (see graphic) to hasten labour imports.

The process is to due for discussion with the Immigration Bureau, the Foreign Affairs Ministry, the Public Health Ministry and the Internal Security Operations Command.

Employers are asked to respond to a survey on how many migrant workers they need in their businesses and they must give answers by the end of this month. 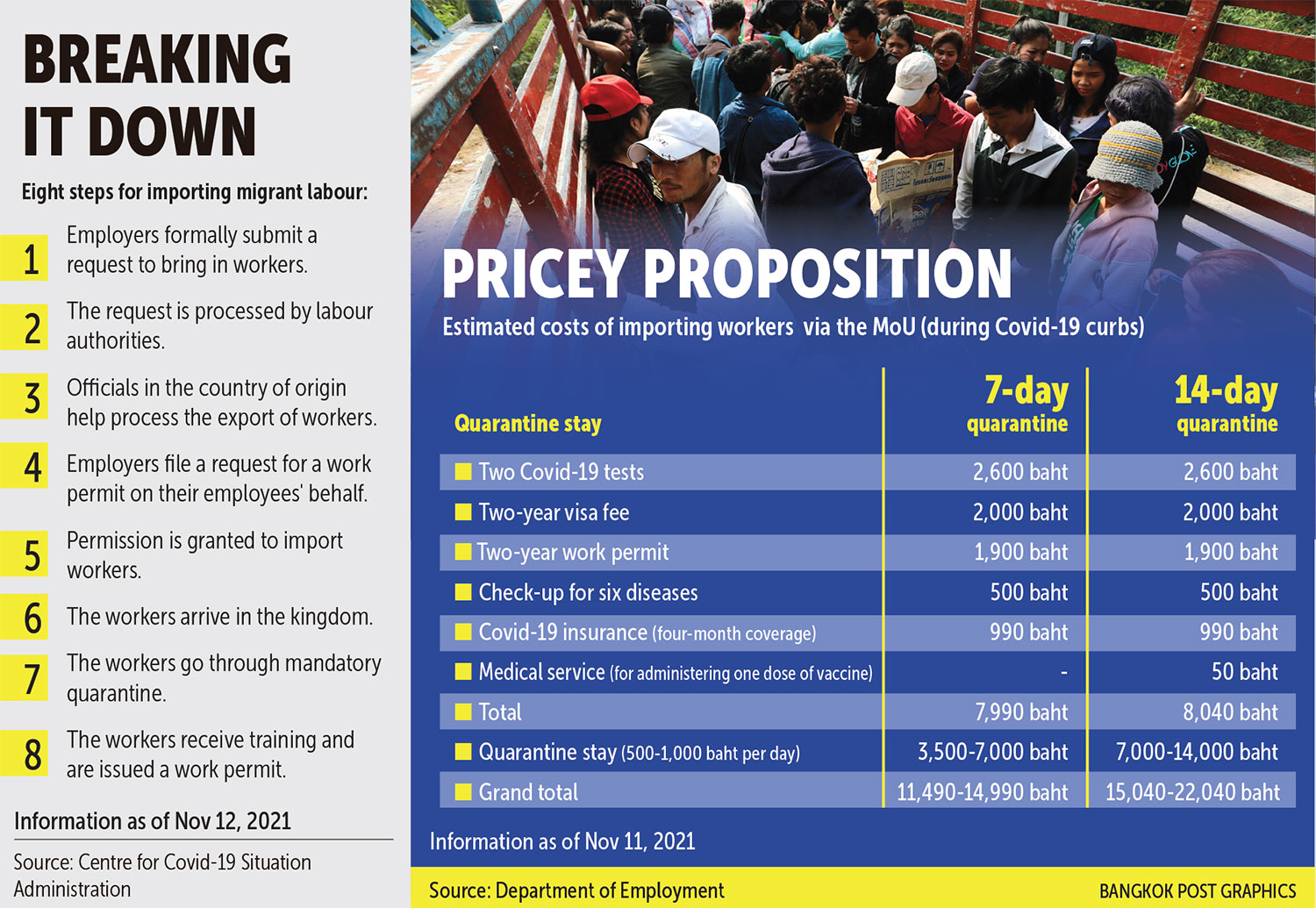 MoU-based recruitment is being adopted after many migrant workers returned to their home countries at the onset of the pandemic crisis last year, leaving behind a large gap in the workforce.

With Covid-19 restrictions largely relaxed and businesses reopening, the gap needs to be filled quickly, prompting migrants from Myanmar to illegally cross the western border in droves in search of employment.

The government figured the MoU would effectively regulate employment of migrant workers and subject them to mandatory public health screening though this is time-consuming.

A faster way was for some migrant job seekers, particularly those from Myanmar, was to set out on foot and slip across the long, porous North-South natural borderline from Chiang Rai, Chiang Mai, Tak, Kanchanaburi, Phetchaburi, Prachuap Khiri Khan, Chumphon and Ranong.

The border has been frequently breached recently. Illegal crossers grew in number notably after the cabinet on Sept 28 decided to grant an amnesty to migrant workers from Laos, Cambodia and Myanmar who were in Thailand illegally before Sept 28.

Since it was not easy to prove who came before Sept 28, illegal crossers thought they could exploit the loophole. In September alone, 4,000 crossers were caught and the number almost doubled last month, according to authorities.

The illegal entries involved brokers who were paid to transport them to high-employment provinces such as Bangkok and Samut Prakan.

The influx has sounded alarms at Government House. Prime Minister Prayut Chan-o-cha has voiced his concern about the lack of health checks on illegal crossers which could trigger a resurgence of Covid-19.

The illegal entries trace back to employers in the farm, industrial and service sectors who would not import workers via the MoU method.

The Department of Employment found that employers across the country require more than 400,000 migrant workers. Farmers are most in need of labour while Chiang Mai needs migrant workers the most. Myanmar workers remain the most sought-after.

Labour Minister Suchart Chomklin said the cost of getting workers via the MoU is unchanged since before the pandemic. However, some extra charges must be borne by employers, including quarantine, Covid-19 tests and health insurance.

The ministry has tried to bring the cost down by obtaining 500,000 doses of vaccine from the Public Health Ministry for migrant workers.

Poj Aramwattananont, vice-chairman of the Thai Chamber of Commerce (TCC), said when the tourism and service industries are fully restored, demand for workers will skyrocket to one million.

He said the success of labour imports rests with the origin of the supply side. There is no problem with importing workers from Cambodia and Laos.

With Myanmar, the main obstacle relates to unstable internal politics which could lengthen the labour import process to between 90-120 days. Even that is a conservative estimate, he said.

"We have to hurry and bring the Myanmar side up to speed," he said.

Experts also agreed MoU-based imports of labour are not easy to bring about. The difficulty begins even before job seekers set foot on Thai soil.

They must rely on employment agencies filling out forms and paying for their journey to Yangon where they have passports produced and undergo health checks.

Many borrow the equivalent of 15,000-20,000 baht each to cover the cost of getting jobs in Thailand.

Before the pandemic, job seekers spent anywhere from 45-60 days waiting to enter Thailand via the MoU method. Post-coup, it is expected to take even longer.

Adisorn Kerdmongkol, a coordinator with the Migrant Working Group, said the government is unlikely to meet worker import targets, and the reasons are beyond its control. He argued that although vaccination may not be decisive criteria persuading workers to come to Thailand, the issue can pose an obstacle for employers who must fork out money to pay for the workers' quarantine (see graphic). Double-dosed workers are quarantined for seven days as opposed to 14 days for those with a single jab.

"The MoU-based recruitment may be affordable for large companies with plenty of cash to spare. For smaller businesses the problem is not limited to the issue of finances. Labour imports are not permitted for certain small businesses and when such employers are short of workers, they look to illegal border crossers," Mr Adisorn said.

The cabinet has passed two resolutions -- one on Dec 29 last year and the other on Sept 28 -- regarding registration of migrant labour. The second resolution came after the country suffered a gap in the workforce caused by the return of many legal workers to their countries. The resolution allowed for migrants remaining in Thailand illegally -- either because they never registered with the authorities or were registered but failed to renew their work permit -- to be given legal working status.

Mr Adisorn suggested the government prioritise re-entry of workers who left the country earlier to renew their passports but could not get back because the pandemic forced the border's closure.

Last month, the Kanchanaburi border with Myanmar was in the spotlight after Deputy Prime Minister Prawit Wongsuwon ordered security forces to curb the inflow of illegal crossers, some of whom had been trafficked.

Gen Prawit instructed authorities to ramp up efforts to stamp out human trafficking after Thailand was downgraded to the Tier 2 Watchlist in the 2021 Trafficking in Persons (TIP) annual report.

Gen Kongcheep Tantravanich, spokesman for the deputy prime minister, said Gen Prawit said some aspects of anti-human trafficking operations were inefficient and unacceptable. Among them was the alleged involvement of state officials, police and military officers in human trafficking and the use of forced labour in some industries, the spokesman said.

From Oct 18-30, 537 illegal Myanmar crossers were caught in Muang district -- two in Sai Yok district, three in Thong Pha Phum district and four in Sangkhla Buri district. From Nov 1, which marked the country's reopening, to Nov 18, the number of illegal crossers jumped to 829 in Kanchanaburi.

The brokers charged them 15,000-28,000 baht each depending on their ultimate destination. Many headed to Mahachai in Samut Sakhon, home to the country's largest population of Myanmar migrant workers; Samut Songkhram, Bangkok and its surrounding provinces.

A local source in Kanchanaburi said Myanmar illegal crossers told reporters they were driven to find jobs in Thailand by the economic hardship back home and the desire to escape being rounded up by the Myanmar military and forced to fight the minority rebels.

Meanwhile, Maj Gen Banyong Thongnuam, commander of the Surasee Taskforce supervising security on the western border, said the number of illegal crossers corresponded to orders from Thai employers. ''The MoU method might partially reduce illegal entries and solve the labour shortage," he said. However, it would not eradicate the problem.

The method gives migrant job seekers a choice of taking up employment through legal means although there will always be some who were trafficked or those who chose to bypass the paperwork and pay their way, he said.

MoU-based recruitments have kindled hope for some illegal migrant workers. Kham Man, 35, a Myanmar worker, said he worked illegally as a waiter in Chiang Mai.

''I paid 15,000 baht to an agent who organised everything for me. I landed this job last month without a work permit,'' Kham said.

He said when he heard about the MoU, he was delighted at the prospect of gaining a legal employment status.