voters will cast two ballots in the next polls -- one for the constituency candidate and one for the party of their choice. (Bangkok Post photo)

While the proposed amendments are expected to sail through parliament and pave the way for fresh polls, parties will fight tooth and nail to tweak the rules in their favour.

Under the charter change, voters will cast two ballots in the next polls -- one for the constituency candidate and one for the party of their choice. The number of constituency MPs also increases from 350 to 400 while the number of party-list MPs falls from 150 to 100.

It marks a departure from the 2019 general election, in which a single ballot was used and the number of votes a party received from its candidates determined the total share of House seats to which it was entitled.

The switch back to two ballots would affect the calculation of party-list seats, an issue that is expected to take centre stage in the proposed amendment to the law on the election of MPs, and parties will fight to make sure they have leverage.

Currently, the different sides are split over the calculation method with major parties leaning toward the formula floated by the Election Commission (EC). Small coalition parties and the opposition Move Forward Party (MF) are not happy with it.

The poll agency has finished drafting the amendment on the election of MPs and published it on its website to gather public feedback. 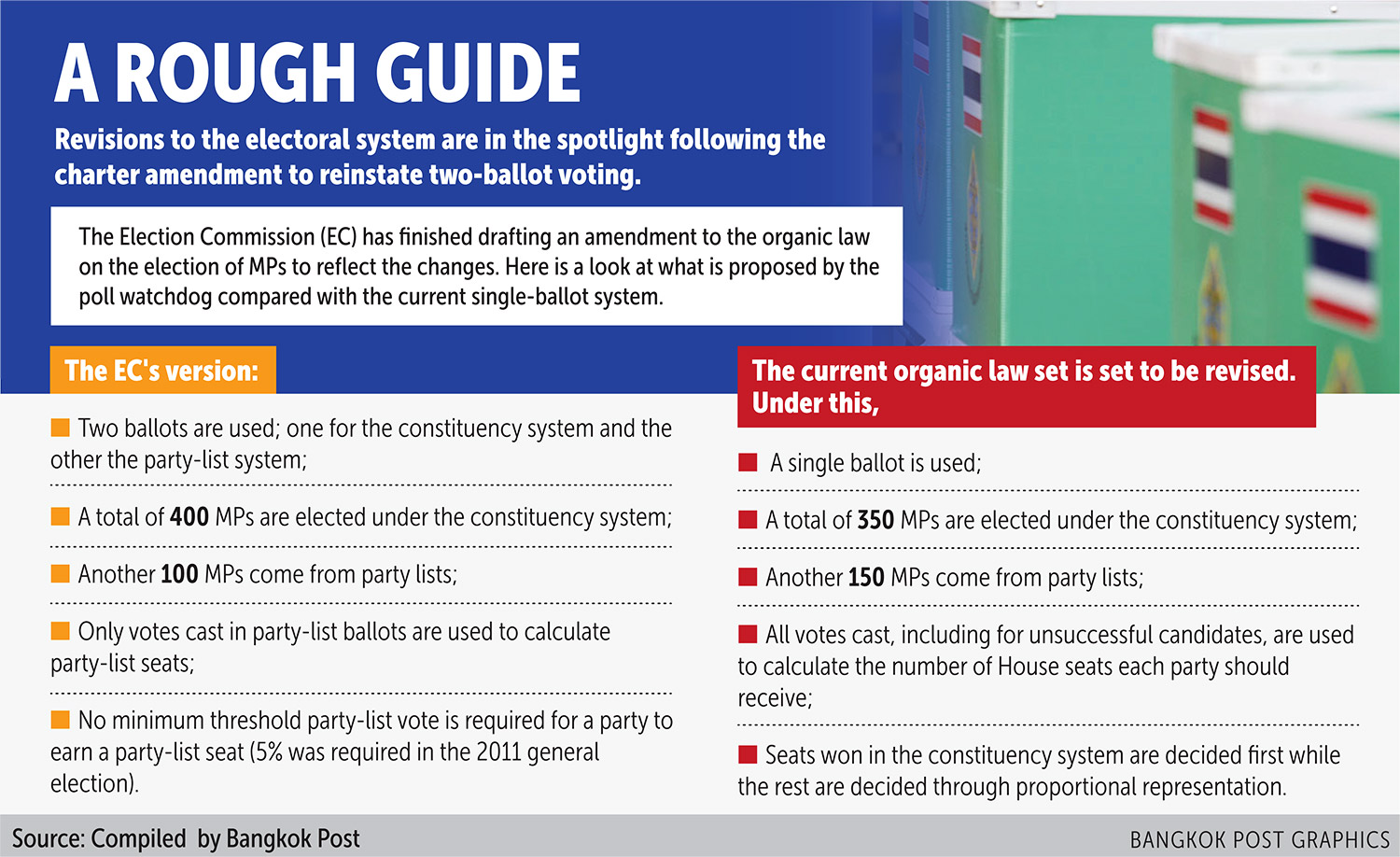 The bill proposes a simple calculation method for party-list seats and with this formula, the number of party-list votes required to get a party-list seat would be around 350,000-380,000 votes.

Small parties would be at a disadvantage, however, considering that in the 2019 polls they needed only 70,000 votes to earn one party-list seat.

A group of small coalition partners led by the New Palang Dharma Party (NPDP) is prepared to challenge the calculation method when the draft amendment goes to parliament for deliberation.

NPDP leader Rawee Matchamadol said the total number of MPs (500) should be used to calculate party-list seats. With this formula, a party needs only 70,000-76,000 votes to be allocated a party-list seat.

The EC's draft uses 100, which is the number of party-list MPs, in the calculation.

"Small and medium-sized parties are considering a strategy to approach this. We may submit motions for separate proposals as some may be accepted while others are rejected," said Dr Rawee.

He said the EC's draft, which is expected to be endorsed by the cabinet, is standard and the PPRP's version and party-list calculation method are similar to the EC's.

"We have to comply with the constitution. We can't tweak the laws in our favour," he said.

"Small and medium-sized parties are considering a strategy to approach this. We may submit motions for separate proposals as some may be accepted while others are rejected." — NPDP Leader, Rawee Matchamadol

Pheu Thai MP and chief opposition whip Sutin Klungsang said debates on the new electoral system will be intense as small parties and the MFP want a different calculation method for party-list seats.

"But I think they have a slim chance. The EC's draft and the coalition government's versions are similar to Pheu Thai's. Small parties will have a tough time in the next polls," he said.

The primary vote system to select MP candidates to stand in national polls will be the focus of the proposed amendment to the organic law governing parties.

Under the law, parties must organise primaries where members choose the candidates they want to stand in both constituency and party-list elections.

However, parties and critics are concerned primaries are a time-consuming process and will put small parties at a disadvantage due to their limited resources for establishing branches and bringing in members.

Pheu Thai leader Cholnan Srikaew said the primary voting system will be retained in the party's draft amendment to the party law but will be revised to be "flexible".

Under the party's draft, parties will not be required to have representatives in every constituency and setting a local party branch in each province should suffice.

Chusak Sirinil, the party's chief of legal affairs, said primary voting cannot be scrapped because it will go against the constitution. However, the rules will be tweaked for flexibility with party members given a say in selecting the candidates, he said.

Chinnaworn Boonyakiat, a Democrat MP for Nakhon Si Thammarat and deputy chief government whip, slammed primary voting as unnecessary and impractical with many steps involved in the candidature process.

"The primaries are created unnecessarily and they can't be put into practice. The system has become a burden for parties and it doesn't promote wider public participation," he said.

Meanwhile, Jade Donavanik, a former adviser to the 2017 Constitution Drafting Committee, criticised the reintroduction of the two-ballot system, saying not only does it disregard minority votes but it also makes candidates focus only on their own wins.

He said the government and the opposition under the single ballot system are not weakened and the changes are self-serving.

"The new election system will strengthen the government but weaken the people's power to keep it in check. The system requires political accountability like that seen in Japan where a minister steps down upon being scrutinised or protested.

"Without accountability, it will be bad for checks and balances. The opposition is unable to do its job properly due to a big gap in the number of House seats," he said.

However, Mr Jade said he backed the proposed changes to primary voting, saying it is not being taken seriously by parties. He suggested a simple candidate selection process with input from party members should be adopted with parties allowed to choose their primary voting system when they are ready.

"It will lead to a two-party system. Medium-sized parties would have a hard time and small parties could go extinct. We may need a mechanism to prevent a parliamentary dictatorship."

Mr Somchai said the primary voting is a charade conducted by parties just to comply with the organic law.

However, he said scrapping the system, which is designed to strengthen parties, is not welcome and the EC should consider how to promote greater participation in the candidate selection process.