hustle and bustle: People flock to the Grand Palace and the Temple of the Emerald Buddha at New Year to make merit and pray. Royal calendars were distributed at the Grand Palace to visitors who sign a book to wish Their Majesties the King and Queen a happy New Year.

Tourism in major tourist destinations has clearly been picking up despite the lingering spread of Covid-19, especially since the country's reopening on Nov 1. But all of a sudden, there came an unexpected turning point – the spread of the Omicron variant of the coronavirus.

A new outbreak of the highly-transmissible strain in many countries has consequently dealt another blow to Thailand's tourism yet again. The government was prompted to suspend its Thailand Pass scheme, allowing prospective visitors to register for their planned visit to the kingdom through the Test & Go scheme and the sandbox tourism promotion programmes, except for one being operated in Phuket.

Despite this challenge, most tourism businesses have told the Bangkok Post they still hope the tourism situation in 2022 won't be any worse than that of last year, considering the fact that the new virus variant appears to be less virulent even if it spreads rapidly. The country's Covid-19 vaccination coverage is now also high. So is its level of experience in coping with the pandemic in the past couple of years.

The suspension of the tourist registration system for tourism promotion programmes, except for the one in Phuket, has frustrated many business operators in the affected provinces. 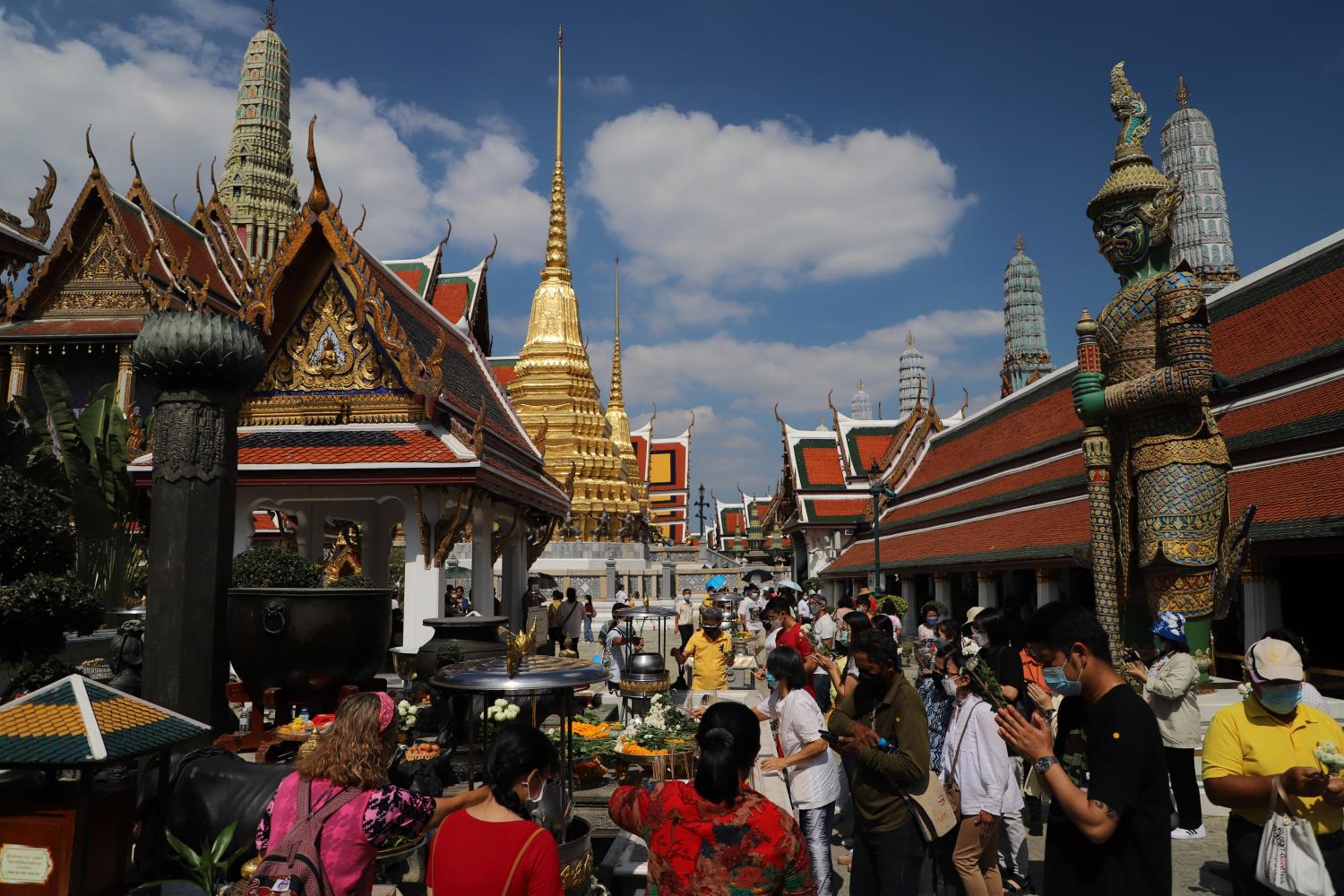 hustle and bustle: People flock to the Grand Palace and the Temple of the Emerald Buddha at New Year to make merit and pray. Royal calendars were distributed at the Grand Palace to visitors who sign a book to wish Their Majesties the King and Queen a happy New Year.

"If Phuket is still allowed to remain open [for international tourists], other areas should be allowed to the do the same," said Krot Rochanasathian, president of Hua Hin Recharge, the tourism reopening project of Prachuap Khiri Khan.

He believes the new outbreak involving Omicron won't become as serious as it was in past waves of Covid-19 and that Hua Hin is capable of coping with the new spread of the virus.

The average hospital bed occupancy rate in Hua Hin now is only 30%, which means it is ready to deal with a rise in number of Covid-19 patients in case a new outbreak erupts, he said.

The decision by the government on Dec 22 to suspend the Thailand Pass registration, however, has badly affected many tourists intending to visit Hua Hin, he said.

They had booked their hotels for January, and many planned to stay for a long period while others were people who could work from anywhere in the world but choose to spend time in Hua Hin, he said.

"These people are high-quality tourists. They usually travel in a private jet and will spend at least 10 days in Thailand," he said.

Pattaya City in Chon Buri, meanwhile, will continue focusing more on attracting Thai tourists to keep visiting while it adjusts to the global tourism situation.

"We aren't expecting much from foreign visitors because we know there still are a lot of limitations," said Rattanachai Sutthidechachai, vice-president of Pattaya's business and tourism association.

Since the Nov 1 reopening, only about 4,000 foreigners have visited Pattaya and only 20% of them were "real" tourists while the rest were foreigners owning a business or with a family here, he said. "We're more concerned about the possibility that Omicron will result in a new lockdown and our Thai visitors will be barred from travelling once again. That will seriously affect Pattaya's tourism," he said.

Since the country's reopening in November, Chon Buri has organised up to 12 tourism promotion events, or about once a week, which has boosted the city's tourism-based economy, he said.

"In my opinion 2022 will be the year that the Covid-19 pandemic will actually come to an end, even though the virus won't disappear from this world," Mr Rattanachai said. Chon Buri has the Eastern Economic Corridor (EEC) scheme that will attract international investors to seminars, trade and investment events and business expos, he said.

The resort island of Phuket, meanwhile, has a rather different tourism situation, given the fact it is still allowed to receive international visitors through its Phuket Sandbox programme. The province was the first to pilot a partial tourism reopening last year.

Despite the suspension of the Thailand Pass tourist registration system, Phuket still expects to welcome the more than 100,000 visitors who have already registered to enter Thailand through the Phuket Sandbox, said Thanusak Pheungdet, chairman of Phuket's chamber of commerce.

About 60,000 foreign travellers entered Phuket under the sandbox programme from July until October, while close to 40,000 more visitors arrived in November, he said. "We have to thank the government for trusting Phuket on this," he said.

About 80,000 foreigners had visited Phuket in December when it recorded about 300,000 visitors including Thais and foreigners entering Thailand via Bangkok and travelling on to the province, said Bhummikitti Raktaengam, president of Phuket's tourism business association.

In the event the Omicron variant spreads rapidly and results in a worse-than-expected global Covid-19 situation, a warning sign will come in a form of a slowdown in bookings, he said. "Tourists are still coming to Phuket while there are no signs of any significant cancellations of bookings,'' he said.

The cancellation of the Covid-19 Test & Go scheme has not affected Chiang Mai either, though for a different reason.

On average 14,000 air passengers travel to and from Chiang Mai a day on more than 150 flights, he said. If the situation continues at this pace for two months, its tourism sector will begin recovering and local business operators should be able to stay afloat, he said.

During the New Year festival alone, tourism was likely to bring about 3 billion baht in income to the province, he said. While the country's reopening has boosted Chiang Mai's tourism, this factor was found to help increase the number of foreign tourists by less than 5%, said La-iat Bungsithong, president of the Upper North's hotel association.

Most tourists visiting Chiang Mai in November and December were Thais. The number of foreign visitors is expected to begin rising between the first and second quarters of this year. Hotels expected a rise of between 50% and 60% in number of guests checking in during the last two months of 2021, thanks to government tourism and spending promotion campaigns, he said.