Thailand will become a "super-aged" society by 2031 when 28% of the population will be 60 or older. (Photo: Patipat Janthong)

Thailand has become an aged society and will become a "super-aged" society by 2031 when 28% of the population will be 60 or older. The country has witnessed a low birth rate for several decades, but it was not until last year that more deaths than births were recorded. In 2021, deaths outnumbered births at 563,650 versus 544,570.

Experts are alarmed by the low birth rate and have suggested the government needs a policy to promote a higher fertility rate, but many people are unfussed. With unemployment among new graduates expected to rise in the Covid-battered economy, some say it is probably better off this way.

"It's a good trend, isn't it? People are struggling to make a living and the jobless are everywhere," said a resident in Bangkok when asked about the low birth rate.

The experts' warning about a shrinking workforce and growing retirees in the next 10 years as a result of below-replacement-level fertility is not as pressing as the bills due at month's end.

"The low birth rate, society is full of retirees. Where will we find the young to drive the economy? Well, we can leave it to the future," said another Bangkok resident.

However, demographers and economists stress the issue should not be framed as a concern for the future and insist policy-makers must start planning now to reverse the trend or the country could end up in trouble. 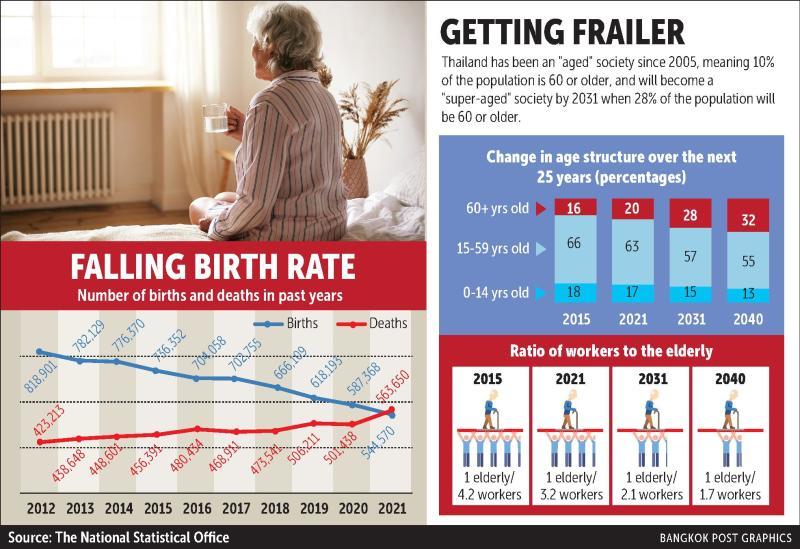 Pramote Prasartkul, a demography professor at the Institute for Population and Social Research at Mahidol University, said the current demographic situation is a stark contrast to the one during 1963-1983, when about 1 million babies were born each year.

"We call it a population 'tsunami'. It is a powerful wave that makes tremendous impacts. The more than one million who were born in 1963 are entering retirement age next year," he said.

After seeing a birth rate of 3.5% per year, which was considered "very high" and prompted a warning from the World Bank, the past government overhauled its fertility policy to slow population growth.

The family planning campaign turned out to be successful, and after 1984 the birth rate started to fall, he said.

People's attitudes and lifestyles have also changed and are believed to have contributed to the low birth rate. The higher cost of raising children is also said to have made some couples forgo their plans to start a family.

Prof Pramote said the low birth rate is a key factor pushing the country into an ageing society earlier than expected. Thailand entered ageing-society status last year when the elderly accounted for 20% of the population.

Thailand's total fertility rate (TFR) used to be 5.1 and has since declined to 1.2, which is below-replacement-level fertility. The TFR is the average number of children born to a woman over her lifetime.

He said most people may not understand how the low birth rate will affect the country, but said it makes itself felt in terms of long-term planning for national development and even in business planning.

"Nurseries, schools, and universities will be affected and there will be a shrinkage of the labour force in the farming and industrial sectors.

Impacts will be felt in the manufacturing sector, even though some argue that technologies can be expected to fill some gaps, said Prof Pramote. Innovations and creativity come from human resources, so society is likely to lose out there as well.

Several countries, such as Germany and Japan, face labour shortages and have had to recruit skilled foreign workers. This shows that demand for human labour remains despite the increasing role of technology, he said.

Prof Pramote said the low birth rate is a signal that the government needs to take initiatives to increase the fertility rate and change public perceptions about reproduction and child-raising.

"Changing people's attitude is a must-do, to help them see the value of having children," he said.

Clear policies should be introduced to encourage couples to have children such as a subsidy for prenatal care and delivery and child support, he said.

The government must also invest in quality education, he said, adding the current free education policy is inadequate and more measures are needed.

Saowaruj Rattanakhamfu, a research director at the Thailand Development Research Institute (TDRI), said an ageing society creates opportunities to develop goods and services to meet the demands of the elderly.

''Thailand has entered an ageing society earlier than most countries in Asean, so it should seize the opportunity to develop new goods and services," she said.

In the next 10 years the number of elderly in Asean and China will grow; the elderly population in Asean will reach 70 million while that in China will be 200 million, she said.

Goods and services for the elderly include medical tourism, medical products for seniors, caretaking services, and furniture and equipment including tech for seniors.

She said the government will have to promote start-ups to develop goods and services for this market and revise regulations that prevent highly skilled workers working in SMEs.

Flexible rules are needed to encourage new businesses that meet the needs of the elderly. If the economic growth rate is low, the government will not be able to meet people's expectations on public welfare.

In an ageing society, labour productivity will fall, though robots and automation can help fill the gap.

The government should support SMEs and farmers in using robots and automation by providing subsidies for training and offering tax incentives or soft loans.

Warunee Sitthirungsan, a 39-year-old office worker, is keen to have children but now fears she has left it too late.

"I wanted a baby in the early stage of marriage but now I am too old to have one. The most important thing is my financial status," she said.

Economic concerns are the main factor guiding a middle-income couple's decision to have a baby.

The lower TFR in Thailand is similar to that of many countries in Asia, including South Korea, Taiwan, Japan and Singapore, where the fertility rate is low.

State agencies are now working together on ways to boost the fertility rate, with more details to be disclosed around Valentine's Day.

Dr Bunyarit Sukrat, director of the Bureau of Reproductive Health, said the Ministry of Public Health has drafted a plan to encourage younger couples to have children.

The plan includes a scheme to reduce spending burdens for newborns, an increase in child care centres to help working parents, and help for parents experiencing difficulty in having children.

It further supports the government's population policy by encouraging married couples to have at least two children.

The ministry found that couples have trouble accessing infertility treatments. There are 104 clinics and hospitals treating infertility nationwide, mostly in the capital. He said the ministry also plans to amend a law to allow families to adopt and have children of their own more easily.

"The issue is challenging. But society has relaxed with same-sex marriages," Dr Bunyarit said. "If the law is more relaxed, they could have their own children."

"Anyway, a well-rounded discussion is needed as it is a sensitive issue for couples and children," he added.

The top 50 richest people in the world have lost more than half a trillion dollars on paper this year, a stunning loss of wealth that exceeds the gross domestic product of Sweden and is greater than the market caps of all but six companies in the S&P 500.