The cabinet has decided to implement 10 measures to ease the burden on households and micro-business owners following a spike in the cost of living prompted by increased fuel prices.

While the government's response has been welcomed and is seen as necessary to alleviate hardship, many say these measures, which will not take effect until next month and then last only until the end of July, are not enough to help them keep pace with runaway prices.

A number of consumer and retail groups are urging the government to put money in their pockets now by rolling out a fifth phase of Khon La Khrueng, the state-sponsored co-payment subsidy scheme, and peg the prices of essential goods and services to shield low-income earners from financial strain. 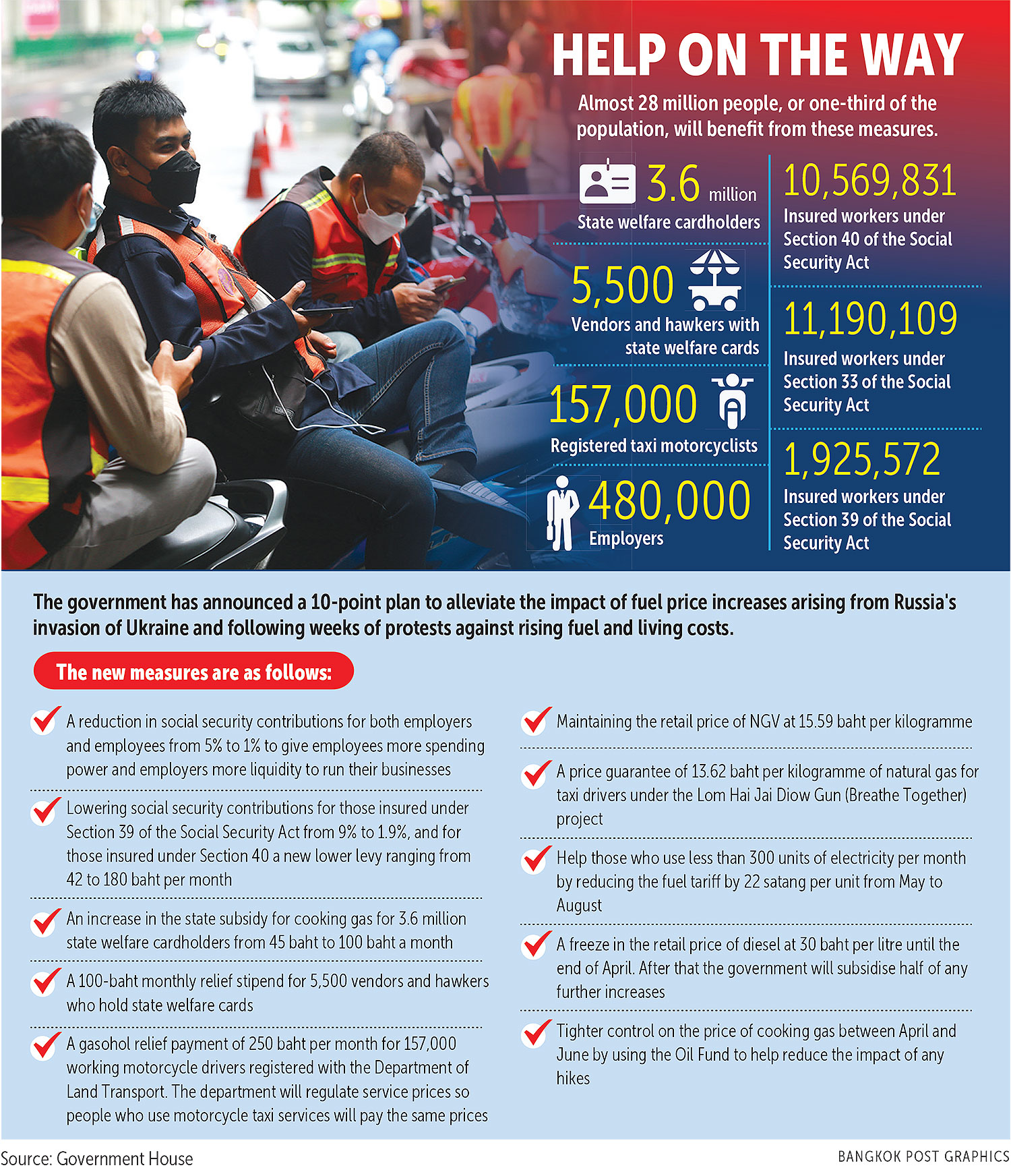 Thaniwan Kulmongkol, president of the Thai Restaurant Association, said people face an income freeze during this tough time but will still have to bear the additional costs of disease control measures such as face masks, hand sanitiser and antigen test kits.

Ms Thaniwan said small-scale street food vendors, of which there are estimated to be around 90,000, are part of the grassroots economy and the government must do all it can to help them survive.

Prices of consumer goods increase as energy prices rise -- fuel, cooking gas and electricity bills -- and the 10 measures will help to a certain extent, she said.

However, launching a further, fifth phase of the Khon La Khrueng co-payment scheme is what the government should focus on in addition to the relief measures, said Ms Thaniwan.

The scheme, which sees the government subsidise 50% of food, drinks and general goods purchases for participants, with the total subsidy capped at 150 baht per person per day, will help both vendors and the general public.

Micro-business owners have reported low sales after each phase of the scheme has ended, she said.

Ms Thaniwan said she expects more fuel or electricity subsidies from the government and wondered if energy companies like PTT Plc could be persuaded to lower their profit margins for a while to help households keep energy bills under control.

"The people are caught between a rock and a hard place. Costs have increased, so vendors have to increase their prices, which turns customers away. Wages, meanwhile, remain the same, as does purchasing power.

"How can we survive this? Another phase of Khon La Khrueng can help a lot especially small-time retailers and food vendors," she said.

Yada Pornphetrampa, who represents hawkers and street food vendors, said many are unimpressed by the government's response because they are struggling with cost of living, but the 10 measures will not begin until next month.

Some people also feel the package is geared towards car and motorcycle taxis, she said, referring to a price guarantee of 13.62 baht per kilogramme of natural gas for taxi drivers under the Lom Hai Jai Diow Gun (Breathe Together) project and a gasohol relief payment of 250 baht per month for 157,000 working motorcycle drivers registered with the Department of Land Transport.

According to Ms Yada, direct cash handouts are what the public badly needs at a time of financial woe, and schemes like Khon La Khrueng increase purchasing power and "grease the wheels" of the economy.

The government will have to regulate the price of necessary goods and make it genuinely possible for low-income earners to access loans, she said.

She added that despite soft loan projects by state-run banks, some conditions keep many households from accessing financial assistance.

"Small people don't have many opportunities to make a living. They don't have the capital. Their savings have been used up during Covid-19," she said.

With Covid-19 set to be classified as an endemic disease, the government also should consider allowing night entertainment venues to reopen, Ms Yada said.

Rewat Chobtham, of the Network of Thai Street Vendors for Sustainable Development, said that while the new measures are better than nothing, many street vendors are still left out as only 10% hold state welfare cards.

The government should arrange cheaper fuel especially cooking gas which is a necessity for every household. As to the discount on electricity bills, he said the relief measure is for households that do not use air conditioners.

"The measures benefit limited groups of people while most people who are also struggling are left out," he said.

He said maintaining the price of essential goods and providing market places for vendors will help them stand on their own feet and reduce the government's financial burden.

Chalerm Changthongmadan, president of the Motorcycle Taxi Association, said the measures are not sustainable and the government must do more to control the prices of essential goods.

"A gasohol relief payment of 250 baht per month is about 8-9 baht per day when our food expenses are around 180 baht, which don't include 120 baht to refill tanks. It hardly helps," he said.

The government could also promote the use of electric motorcycles by lowering prices which are twice that of regular fossil fuel-powered vehicles, he said.

"I would recommend zero down payments too. The EVs will lower costs and they are good for the environment," he said.

Sadit Jaithiang, president of the Thai Public Taxi Association, said allowing taxis to raise fares would help his group more effectively. The last time the fare was raised was in 1992.

The taxi fare for the first 10 kilometres should be increased to 7 baht per km, from 5.50 baht now, along with the 35-baht startup fare, he said, adding that taxi drivers need more than temporary relief measures.

"The government is concerned about people's cost of living. What about taxi drivers and their families?" he said.

Udom Homsap, a 60-year-old taxi motorcyclist, said fuel costs have doubled and now he has to pay about 120 baht to fill up tanks. The monthly subsidy of a 250-baht gasohol relief payment will help lighten the load.

Opas Khlai-udom, 56, a tuk-tuk driver, said his daily income has fallen from 800-1,000 baht to around 200 baht and he feels lucky if he earns 300 baht these days. In fact, some of his colleagues hold two or three jobs to make ends meet while many have returned to their home provinces, he said.

"What I want to ask is 'please don't raise the price of goods'. We are barely surviving," he said.

Supaporn Prasomsamai, 42, a food vendor, said her income has dropped by more than 80% and there is no way the 100-baht monthly relief stipend for vendors and hawkers goes far enough to help.

"I'm not asking for any help but the government had better get itself out of this situation. It's our children who have to pay for the loans it has obtained and those loans don't make any difference for vendors like us," she said.

Nipawan Sriprayoon, 53, another vendor, said all costs are rising -- particularly cooking gas and fuel for her motorcycle -- but she cannot afford to raise prices because her customers are also in financial trouble.

She said the cooking gas stipend for vendors should be around 200-250 baht, noting that she sees many people with state welfare cards wearing gold and many Khon La Khrueng participants have been state officials.

"Small-time vendors are out in the cold," she said.