Bangkok governor-elect Chadchart Sittipunt is welcomed by residents in Bangkok Yai during his visit to the district on Saturday to get to know the people and learn about their problems. (Photo: Pattarapong Chatpattarasill)

Newly elected Bangkok Governor Chadchart Sittipunt is asserting his readiness to work with every stakeholder to fulfil his campaign promises and make the capital more hospitable for everyone.

Mr Chadchart stresses that under his leadership, Bangkok Metropolitan Administration (BMA) officials must be proactive in their duties to swiftly address problems and execute his urban development plans.

The 55-year-old associate professor who ran as an independent achieved a landslide victory in the 11th Bangkok gubernatorial election on May 22, winning a record 1.38 million votes, or about 51% of the total.

His academic and professional record in engineering and infrastructure stems from his PhD in engineering from the University of Illinois and experience in teaching at Chulalongkorn University's Faculty of Engineering. He made his national debut in 2012 when he joined the Yingluck Shinawatra government as transport minister.

Despite his distinguished CV, he told the Bangkok Post that governing Bangkok will not be an easy task as he will have to deal with many challenges to transform Bangkok into the ideal city for all.

To do so, he presents his flagship "Bangkok's Nine Good" policy, which focuses on improving the city in nine different sectors: environment, public safety, public health, infrastructure, city governance, economy, education and creativity, with the first three receiving the most attention. 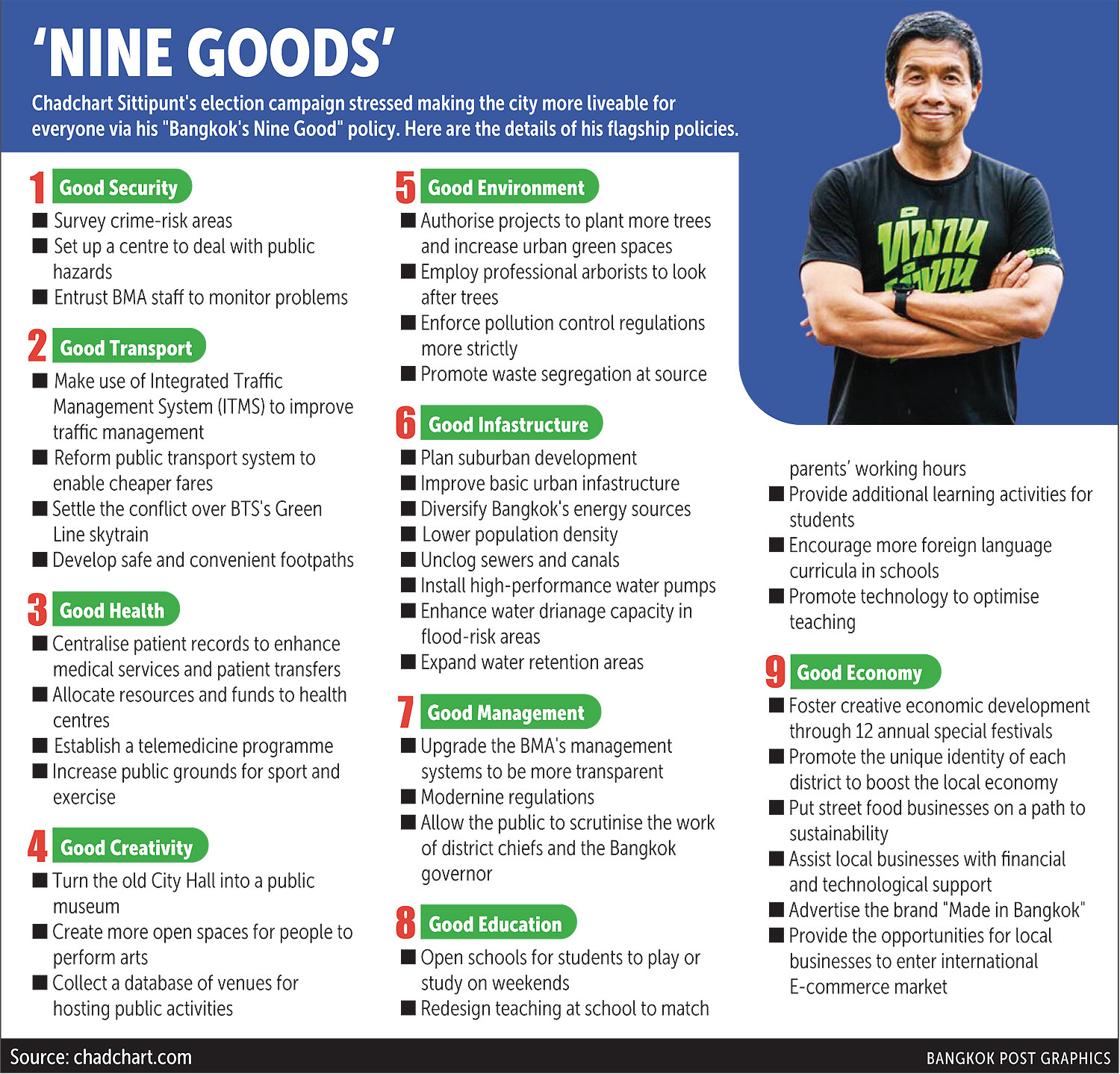 Since he won then poll, he has been visiting various spots in Bangkok to get to know the people and learn about their problems.

"As the majority of Bangkok residents chose me to govern, they trust that I can change Bangkok into a beautiful city that everyone can enjoy, with good living standards, so I cannot let them down," Mr Chadchart said.

Asst Prof Niramon Serisakul, director of the Urban Design and Development Centre, said Mr Chadchart's "Bangkok's Nine Good" policy is one to watch over the next few years because it covers district-level development, micro issues, pedestrians and urban green space.

"These topics mean intensive collaboration with local communities and the decentralisation of urban development, which is a challenging task," he said.

"The first thing I'll do as governor is implementing these policies, so I would like to ask officials to familiarise themselves with the details, as we are going work together to implement them," Mr Chadchart said.

He is urging every BMA official, especially the chiefs of Bangkok's 50 districts, to be more dedicated in their duties to help tackle problems in each area, including those involving wastewater and rubbish management.

Once sworn in, he will randomly inspect a district every Sunday to identify issues and encourage officials to work.

He will also annually assess the performance of district chiefs with input from the public being considered, Mr Chadchart said.

"As we are going to push forward the huge task of building [the ideal] city together, all sides must adjust and compromise," he said. "I'll also have to adjust my working style to adapt to BMA officials as well."

He stresses the biggest problem in Bangkok is corruption, which is deeply integrated into the way the BMA governs. He is considering collaborating with the National Anti-Corruption Commission to solve corruption issues at the BMA.

Asked about the potential for conflicts with national politicians, Mr Chadchart said he works for the people and is not politically aligned.

"I was elected by the people, so I work to serve the people with benefit for the public as the priority," he said.

He said the BMA and the government must work together to help people, noting differences must be set aside and officials should cooperate in a rational manner.

Cooperation with local communities and the private sector must also be considered, he said.

"So, we must stop seeing local communities as a burden and start acknowledging that by building trust and providing empowerment, they have the potential to help the BMA develop the city," he said.