Operators of tourism-related businesses have welcomed the move, hoping that an expected surge in international arrivals will help the tourism industry get back on its feet after being hit by the economic impacts of the Covid-19 pandemic.

According to Tourism and Sports Minister Phiphat Ratchakitprakarn, more than 400,000 foreign visitors arrived in Thailand in May when the Test & Go scheme was lifted and at least 900,000 were expected monthly from Friday when the Thailand Pass requirement ended.

The number is projected to hit 1.5 million per month during the high season, he said.

"Entry rules will become more friendly and convenient for tourists. Ease of entry is another factor that will convince them to choose Thailand as their first-choice destination. The lifting of the Thailand Pass will be a boon to not only Phuket, but the tourism industry as a whole," he said.

Mr Thanet said tourism in Phuket is now starting to improve, with many airlines seeking to launch direct flights from countries including India to the island province.

"The lifting of Thailand Pass will prove to be a catalyst to encourage airlines to make a quick decision," Mr Thanet said.

He also noted that the current number of visitors to Phuket has not dropped despite being the low season, with arrivals in the region of between 3,000 and 4,000 per day, particularly from India.

During the past two months, Phuket welcomed almost 50,000 Indian tourists, he said, adding the Phuket Tourism Council will work with the Tourism Authority of Thailand (TAT) and local authorities to organise a promotional tourism roadshow in three cities in India to attract more tourists.

He hopes at least 200,000 Indian visitors will arrive in Phuket this year.

However, he said that even though the number of foreign arrivals in Phuket is increasing, it will take some time before tourism there returns to pre-pandemic levels.

"We hope there will be more direct flights to Phuket. The tourism marketing initiative by the TAT and Phuket tourism associations is expected to attract more tourists from new countries and that should help improve the local economy," he said.

Mr Thanet said that if the number of foreign visitors reaches 30% of the pre-pandemic levels this year, this is expected to generate more than 100 billion baht in income.

The resumption of businesses and activities, including seminars, meetings and exhibitions, have helped revitalise the local economy, he said.

The end of Thailand Pass will boost tourism in Chiang Mai as the province is a favourite destination for many tourists, Mr Prachon said.

Currently, Chiang Mai is hosting FTI Expo 2022 organised by the Federation of Thai Industries (FTI) as well as Lanna Expo 2022, he said. The two events will end Sunday.

"The government and private sector are working together to restore consumer confidence, which is receiving a good response," the governor said.

However, he admitted the economic situation, rising fuel prices and the high cost of living are still difficult challenges. 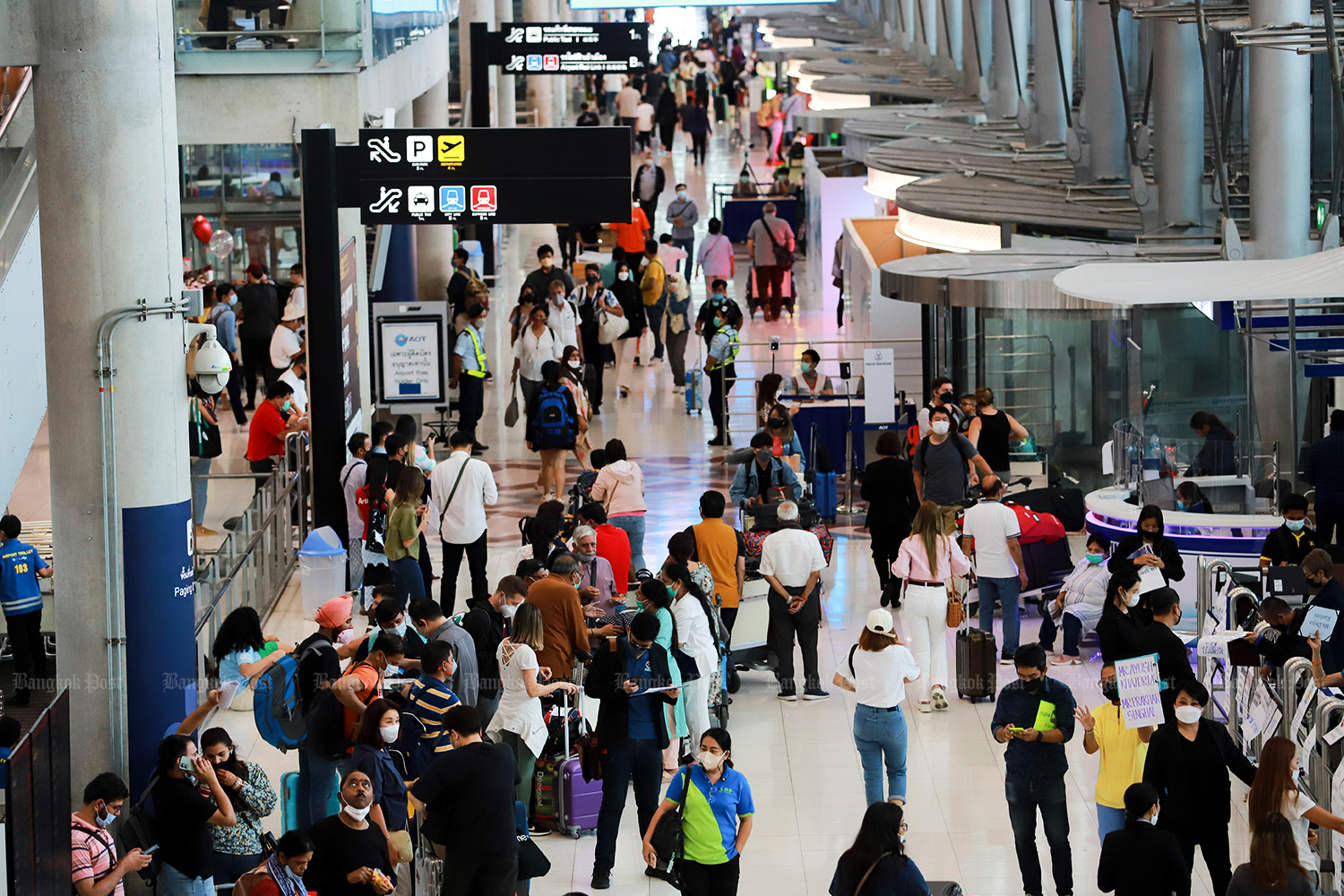 Between January and April, about 2.8 million tourists visited Chiang Mai, generating some 20 billion baht, even though this could not compare with the period before Covid-19 hit.

Most tourists were Thais, with the rest from the US, Europe and other Asian countries, Mr Watcharayu said.

More international arrivals are now expected, particularly from India, he said, adding that operators of tourism-related businesses are fully prepared to welcome back tourists.

The Foreign Ministry's Department of International Economic Affairs will also host the 3rd Apec Senior Officials and Related Meetings in Chiang Mai from Aug 16–31, he said.

Thana Laopanich, president of the Thai Hotels Association's northern chapter, said hotel occupancy rates in the North are at about 30%, with bookings for meetings and seminars.

He hoped the country's full reopening to tourists will help boost occupancy rates to 50–60%, particularly during the high season.

Pattaya mayor Poramet Ngampichet, said the government's decision to allow nightspots to open until 2am will revive tourism in Pattaya.

"This will give tourists longer to enjoy themselves. Most importantly, an end to Thailand Pass will help tourists travel more conveniently," Mr Poramet said, adding that Pattaya expects an influx of about 3–4 million tourists from India.

"They are applying for visas and will be big spenders in Pattaya, in addition to visitors from the UK and the Middle East," he said.

Mr Poramet said that in 2019, Pattaya attracted about 5 million domestic visitors and about 2 million Chinese tourists, as well as travellers from Russia, India and South Korea, generating some 300 billion baht in income.

Between January and April this year, the popular beach town welcomed 3.8 million visitors, mostly Thais, partly due to the government's "We Travel Together" hotel subsidy scheme, with an income of about 22 billion baht, he said.

During this period, there were only 65,000 foreign visitors, but that number increased by 40,000 in May when some entry requirements such as the Test & Go scheme were lifted, he said.

From this month, a series of activities will be rolled out to welcome tourists, such as the Pattaya Marathon on July 16-17, the Pattaya Music Festival which will be held next month or September and the Pattaya Fireworks Festival in November, among several other events, he said.

"This positive trend shows that Pattaya is on the road to recovery. However, we don't expect it to return to pre-pandemic levels this year. Recovery may be gradual and other factors such as the global economy must be taken into account," he said.

"Another problem is that despite Thailand reopening, the number of international flights to Thailand is still limited and the Tourism and Sports Ministry should step in to help," he said.

"Right now, the purchasing power of domestic tourists is declining so we expect to receive a boost from spenders from abroad," he said.

After the pandemic hit, domestic tourist numbers dropped to 570,000 while there were fewer than 700 foreign visitors last year.

Tourism income from Thai tourists shrunk to 2.2 billion baht and there was only 7.7 million baht from foreign visitors last year, he said.

"I believe this year will be better than 2020 and 2021, but it still cannot compare with 2019. It will take some time for businesses to recover," he said.

Mr Nopporn said that 40–50% of foreign visitors to Hua Hin are from Scandinavian countries escaping the cold weather back home.

They stay here for at least two to three months and some decide to settle down here permanently after retirement, Mr Nopporn said.

Currently, a new promotion has been launched to offer golfers access to some of the best courses in Hua Hin as well as in Cha-am district of Phetchaburi until Sept 30.

Golfers can purchase four coupons for 3,500 baht which can be used in a variety of hotels, golf courses, restaurants, water parks, spas and wellness facilities, he said.

"I aim to turn Hua Hin into a working space for people from around the world. Hua Hin is fully equipped. The sea, sand and sun are on offer. Fresh air blows in from the sea and it is not too far away from Bangkok.