Street cart vendors on a pavement in front of CentralWorld, Ratchadamri Road, are an important part of the local economy. City Hall wants to allocate hawkers and street vendors special centres in the capital. (Photo: Wichan Charoenkiatpakul)

The Bangkok Metropolitan Administration (BMA) plans to relocate street vendors in a project modelled on Singapore's success in managing issues arising from an abundance of street hawkers.

Bangkok has been plagued for decades by vendors occupying pavements, although supporters have always argued that street vending is one of Bangkok's main tourist magnets, helps boost the grassroots economy, contributes to the city's vibrant social and cultural scene and offers a vast array of affordable food and goods.

Opponents, however, claim roadside vendors do not have to pay taxes while many ignore hygiene and sanitary practices, as well as obstruct traffic.

The ever-increasing numbers of street vendors have prompted City Hall to come up with measures to regulate them; yet many hawkers have paid no heed and continue to occupy pavements.

Some city officials have also been accused of receiving kickbacks from vendors in exchange for allowing them to hawk their merchandise on pavements.

According to the BMA, in 2011 there were a total of 773 locations where trading was permitted on footpaths temporarily.

The number has now been reduced to 171 after the government worked with the previous Bangkok governor, Pol Gen Aswin Kwanmuang, to regulate street vending.

When Chadchart Sittipunt assumed the Bangkok governorship about two months ago, he vowed to tackle unregulated vending on pavements with the management of hawker centres in Singapore as a model. He instructed a team of advisers to come up with the best solution.

Kessara Thanyalakpark, the governor's chief strategy and financial adviser, told the Bangkok Post that Singapore's creation of special centres for hawkers to sell their wares serves as the ideal model for regulating footpath vending in Bangkok.

Tackling unregulated street vending is one of the Bangkok governor's 216 policies aimed at addressing Bangkok's problems and turning the capital into a liveable city, Ms Kessara said. 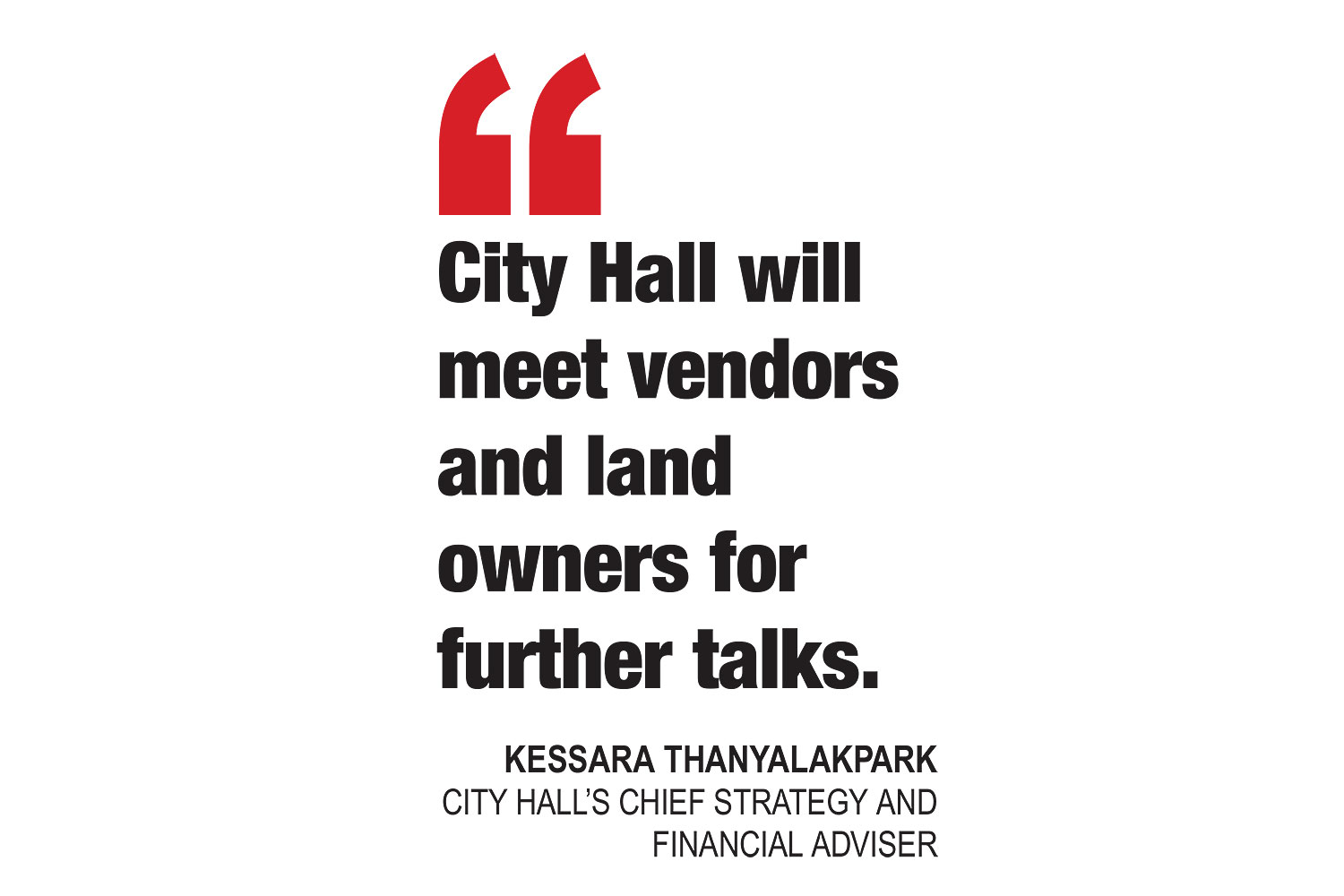 She said hawker centres are part of street hawker culture in Singapore which was recognised as an Intangible Cultural Heritage object by Unesco on Dec 16, 2020.

"Other countries may also be trying to tackle this problem in a similar fashion to Singapore. But instead of calling them hawker centres, they may use different words, such as food courts or street food," Ms Kessara said.

She said the team will devise a set of criteria for locations where off-street premises for relocated vendors will be constructed.

Criteria will also be set to determine which vendors are qualified to sell goods at the new premises.

These are expected to be finalised by the end of this year, she said.

"The premises should be situated by roadsides, or slightly deeper into sois. They should not be far away from the original locations occupied by vendors. There should also be enough customers in the areas to patronise them. Moreover, the locations should be easy to regulate," she said.

City Hall's thessakij inspectors at the capital's 50 district offices have been instructed to look for such locations. Initially, more than 100 locations have been considered suitable, Ms Kessara said.

"After the selection criteria are finished, City Hall will meet vendors and land owners for further talks," she said.

But if vendor demand outstrips the availability of the trading spaces, lots may be drawn to decide who gets them, she said.

"These are just tentative. We still need some time for further study to make sure real vendors get spaces, not nominees acting on others' behalf," she said.

Ms Kessara said talks will also be held with banks and financial institutions to ensure vendors have access to loans to run their businesses.

"Many vendors are known to borrow money from loan sharks, which imposes heavy financial burdens on them," she said, referring to the high rates of interest.

"City Hall's version of hawker centres is not a state welfare programme. The project is only intended to provide vendors with sustainable jobs and charge a fair rent. Goods will also be sold at affordable prices," she said.

"The success of this project will be judged by vendors' compliance with cleanliness and orderliness rules, its contribution to the charm of the city, its ability to ensure sustainable livelihoods for vendors and the availability of affordable food," Ms Kessara added.

Sungsidh Piriyarangsan, chairman of the Senate committee on tackling poverty and disparities, supports the project.

Off-street premises should be arranged for vendors to sell their goods and the rent must be fair, he said.

Vendors relocated from their previous locations should be given rights first, he added.

"City Hall should take up the matter as a key strategy for city development, not just a short-lived plan to offer jobs and create income for the poor.

"Also, the project will boost the country's appeal to foreign visitors. As we all know, Bangkok's street food is renowned worldwide," he said.

Mr Sungsidh said City Hall must invest in providing spaces that suit the needs of both street vendors and patrons while ensuring that orderliness, cleanliness and hygiene are well maintained.

"An online application should also be devised to support vendors' trade and measures must be put in place to shield them from some officials who demand kickbacks," Mr Sungsidh said.

He said some foreign migrants are also muscling in on the street food business as they are willing to pay larger kickbacks to officials in exchange for hawking their goods.

"If Thai vendors are registered on such an application, this problem will not occur," Mr Sungsidh said.

A street hawker called "Jiab" on Khao San Road said that while she welcomed the project, she was not sure if it could become a reality.

Efforts have been made to regulate street vending for a long time, but little has been achieved, she said.

"City Hall executives hardly come and meet vendors and hear what they have to say. They tend to listen to their subordinates, some of whom have vested interests," the vendor said. "Officials from district offices will be sent to carry out the registration of vendors while City Hall's executives won't see anything for themselves.

"So, vendors who have no right to occupy trading spots are registered instead. Some foreign migrants who befriend officials are also allowed to sell," she said. "I want the new governor to come and meet vendors in person, not just listen to officials," she added.

Waiwit Tongthongkham, a 40-year-old bank employee on Srinakarin Road, said meals are getting more expensive as the prices of ingredients and energy continue to rise.

"Aharn taam sang [cooked-to-order food] is now sold for 60-70 baht per dish while a bowl of noodles costs 40-45 baht. The project should be able to respond to the needs of office workers like us," he said.