Special report: Rogue companies which export them to Europe must clean up act or suffer penalties

Labour Minister Suchart Chomklin, centre, chats with Thai workers during a recent visit to a berry picking site in Finland. (Photos by the ministry of labour)

Thai workers who have travelled to Northern Europe to pick berries are calling on the government to step up efforts to address the problem of labour exploitation.

Berry picking has become something of a dream job for those who want a significant boost to their incomes.

Some return home with enough money to build new homes and repay their debts, but others end up in dire straits.

Various types of wild berries are in great demand as Sweden and Finland have exported large quantities of them for use in the food and cosmetics industries with Japan and China, and other European countries as major importers.

Between August and October each year, up to 10,000 Thais, mostly from the northeastern provinces of Khon Kaen, Nakhon Ratchasima, Udon Thani, and Chaiyaphum, travel to Sweden and Finland to work as berry pickers.

Around this time of the year, villagers have finished their work on the rice fields and are waiting for their crops to grow ready for harvest by the end of the year.

During the interval, many look for extra income and working as berry pickers in Sweden and Finland is a popular option as they seek a larger income to help change their lives for the better.

Berries are harvested from the wild and these Swedish companies buy the fruit from Thai berry pickers.

Under the contract, the Thai and Swedish companies must guarantee a monthly minimum income for workers of at least 23,183 Swedish krona or 81,372 baht in this seasonal year as stipulated by the Swedish Municipal Workers' Union. 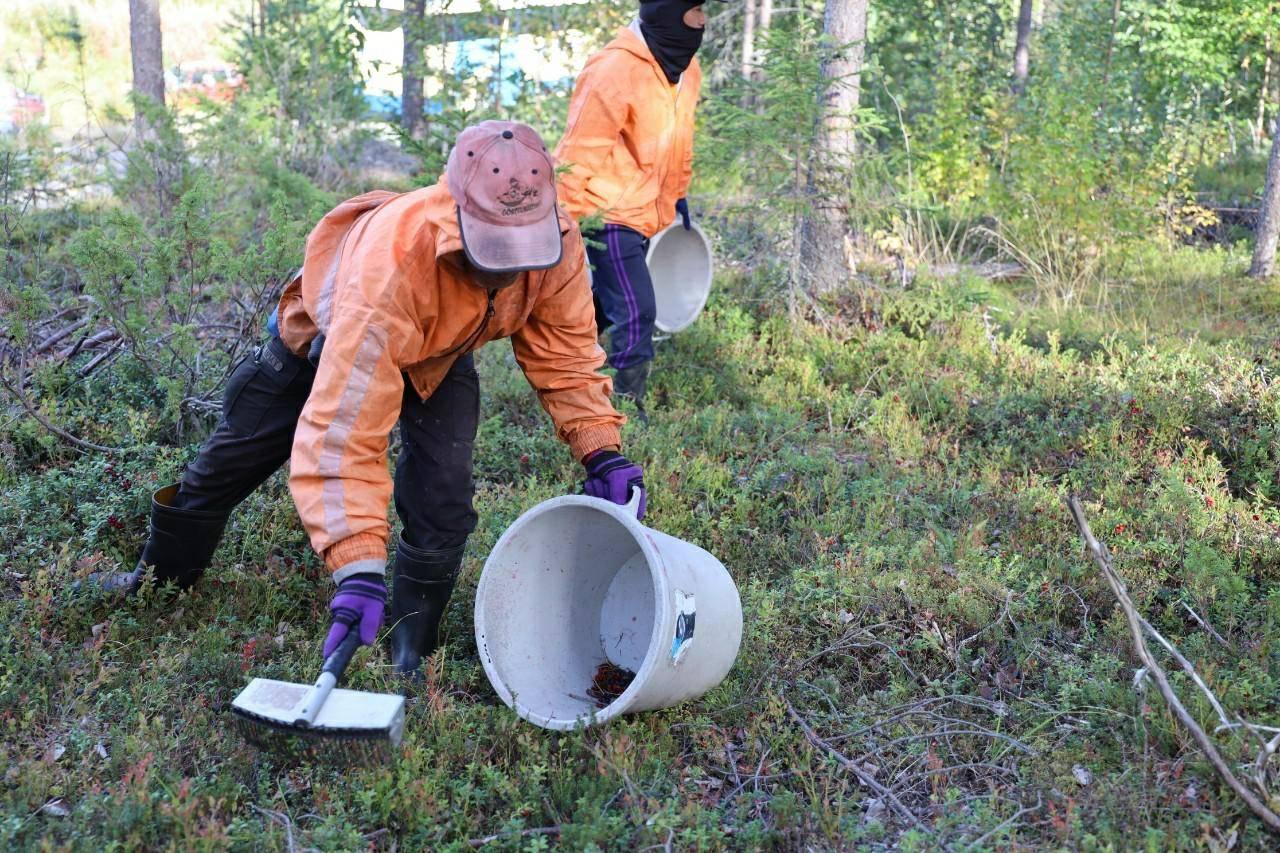 A Thai worker picks wild berries in a forest.

This means if Thai berry pickers sell the fruit to Swedish companies at a price lower than the guaranteed income, the companies must pay the difference to meet the income guarantee requirement.

If the berries fetch a higher price than the price guarantee, there is no need for the company to pay.

As for Thai berry pickers in Finland, they receive special visas and the companies sending them there are designated as coordinators.

The Finnish and Swedish companies that employ them are responsible for providing them with accommodation, food and car rentals.

A villager in Phetchabun who asked not to be named told the Bangkok Post that he travelled to Sweden to work as a berry picker in 2009.

He worked as an employee for a company licensed to send workers to pick berries in the wild there.

He recounted long hours of work, saying he had to wake up at 3-4am and work until 10-11pm every day during the fruit-picking season.

"It was very tiring. But I had to make the most of every minute to make money to pay off my debt,'' he said.

He claimed the company refused to honour the contract that guaranteed a minimum income a month for workers.

The company said the contract was created just to comply with the Labour Ministry's procedures and to apply for visas, he said.

"The contract only exists on paper ... I won't go back again after that experience,'' he said.

Without work during the Covid-19 pandemic, Ath, 36, a construction worker in Pathum Thani, decided to join a group of 61 people, mainly from the Northeast, to be seasonal workers in Sweden from July 13 to Sept 29.

"Everyone had to pay 12,000 baht upfront and another lump sum to the agent to facilitate our journey. For those who did not have money like me, we signed a contract with the company for a loan of 130,000 baht," he said.

The sum was for air tickets, visa fees, accident and health insurance, car rental and interest on the loan, although they still had to bear personal expenses including food, accommodation, and fuel costs.

In Sweden, he and his team worked 14-20 hours a day, starting at 3am and often until 9-10pm in the hope of maximising their hours and earnings.

His contract, he said, clearly stipulated a minimum income of 80,000 baht a month even in the event of a poor berry supply.

But after finishing the job and returning home, he found he did not receive the expected deposit into his account for his labour.

Worse, the company that hired him sent him a letter saying he now owed them 20,000 baht for their service.

Early this month, a group of Thai berry pickers filed a petition with Suthep Ou-on, a Move Forward Party MP and chairman of a House committee on labour, asking him to look into a company sending Thai workers to pick berries in Sweden.

The workers said that when they returned to Thailand, they were informed by the company that they owed it 20,000-30,000 baht, which they said was unfair.

He said Thai berry pickers were treated unfairly without any labour protection under their contracts, particularly in terms of a guaranteed minimum income.

Mr Suthep said he would ask the Labour Ministry to step up efforts to tackle the problem and revoke the licences of companies which fail to honour contracts and put them on a blacklist.

A lawyer who asked not to be named said the exploitation of Thai berry pickers is a chronic problem as workers have to shoulder high expenses and struggle on their own.

Berry pickers working in the wild are left at the mercy of Mother Nature, or the weather that controls the seasonal yield, he added.

"Executives at the Labour Ministry must provide workers with adequate protection under the law and ensure companies comply with the contracts they promise," he said.

The law stipulates that companies that export workers must be responsible for paying for all travel expenses, he added.

"But some companies demand fees and other expenses for accommodation and food," the lawyer said, adding the Labour Ministry must ensure workers receive the income promised.

Samarn Laodamrongchai, an academic at Chulalongkorn University's Asian Studies Institute, said the companies' refusal to comply with income guarantees is the bane of many Thai berry pickers.

Thai workers have told him they did not earn as much as they expected after other expenses were deducted. "They said it was not worth all the time and effort," Mr Samarn said.

Labour Minister Suchart Chomklin said the ministry is stepping up efforts to solve the problem.

In the case of berry pickers in Sweden, employers are obliged by law to comply with income guarantee contracts.

"Workers can file complaints with the Department of Labour Protection and Welfare which will order employers to pay the guaranteed amount," Mr Suchart said.

As for Thai workers in Finland, officials want workers to be registered as seasonal workers like those in Sweden, he said.

He added the Department of Employment has issued a regulation requiring companies sending workers to Finland to deposit about 30,000 baht with banks as a guarantee for each worker.

If problems arise, the money will help ease the plight of workers, the minister said.

Companies must do better

Pairoj Chotikasathien, director-general of the Department of Employment, said that in the 2023 seasonal year, companies that export workers to Sweden and Finland must not be blacklisted or face legal action over labour exploitation.

If they fail to clear problems with workers, they will not be given permission to send workers, or will have their quota of workers reduced, he said.

Ratthamanun Meerahannok, the owner of Friend Berries Co, emphasised the need for employers to honour the contracts as this will have a bearing on the quota of labour exports in the next seasonal year.

Workers usually earn about 160,000 baht during the two-month period in which they are picking berries while they have to pay 130,000 baht in expenses. The minimum income guarantee helps ease their financial burden, he said.

In January, a Supreme Court in Finland sentenced the owner of a Finnish company to one year and 10 months in jail on charges of labour exploitation and human trafficking. The sentence was suspended, however.

The ruling was in response to a petition jointly submitted by 26 Thai berry pickers.

According to the court, the accommodation provided by the company was substandard.

Moreover, the company seized passports and return air tickets from the Thai workers while the workers had to bear high and unreasonable expenses, the court said.