A prime showcase at the Apec summit on Nov 18-19 in Bangkok was the traditional massage services offered to participants at the venue.

The massages performed by individuals provided a soothing break from the meetings attended by delegates and leaders from 21 economies in one of the fastest-growing parts of the world.

Thai traditional massage is a mainstay in the country's wellness tourism. Its origin traces back to one of the best-known temples, Wat Phra Chetuphon Wimon Mangkhalaram, more commonly known as Wat Pho.

A cradle of knowledge and learning centre of traditional massage, the temple is famous both as a travel spot and a place to loosen some tense muscles.

The temple made it on the world map after the United Nations Educational, Scientific and Cultural Organisation (Unesco) listed the traditional Thai massage or nuad Thai on its prestigious World Heritage list.

The coveted registration was announced in December 2019 by the Department of Thai Traditional and Alternative Medicine. Also credited with the success was the Culture Ministry's Department of Cultural Promotion which submitted traditional Thai massage to Unesco.

The Unesco committee registered nuad Thai as an "intangible cultural heritage" item at its meeting in Bogota, Colombia.

The Public Health Ministry pledged to nurture the science and art of nuad Thai which also encompasses a branch of traditional medicine proven effective in relieving and curing symptoms of illness.

Nuad Thai is also valued as a unique profession for Thais. Thai massage and spa parlours have opened here and in many other countries.

The Department of Health Service Support (DoHSS) issues a licence to practitioners who meet requirements for carrying it out.

The department enforces standard requirements under the Health and Wellness Establishments Act which came into effect in 2016.

The act and related laws, enacted a year later, make it mandatory for practitioners in the health and wellness businesses to be registered. The businesses which hire the practitioners must also be certified by the department to operate.

The act stipulates that nuad Thai practitioners must be at least 18 years of age and have obtained a licence.

Prohibited from seeking the licence is anyone with a mental condition or those having been convicted of offences related to sexual crimes, theft or robbery, illicit drugs, or prostitution, unless they have been released from jail for more than a year on the day of lodging the application.

Also barred from applying are those suffering from chronic alcoholism, and drug addicts.

The certification aims to weed out substandard massage services and maximise safety in the name of consumer protection.

The practitioner licence and business certificate may be sought in person at the DoHSS or its branches nationwide, or via the department's online platform.

But before securing the licence, those aspiring to be traditional massage practitioners must undergo vigorous training, the body of knowledge behind which traces back to where it all began: Wat Pho's inexhaustible reserve of knowledge about traditional medicine and its Thai Traditional Massage School.

The Labour Ministry awards a certificate to practitioners who deliver quality massage and encourage those in the profession to undertake a massage quality test so they can be guided on how to improve standards where needed. "Customer's confidence in service quality is essential," he said.

The ministry plans to make such test available for nuad Thai practitioners overseas in the future.

Apakorn Wongketkorn, an inspector-general at the Department of Skill Development, said the agency runs an institute which trains people in fields such as oriental and Thai traditional massage.

The department has devised guidelines on health and wellness business management as the country strives to be the region's hub for the industry.

The professional training includes in-class study as well as internships at massage and spa establishments. There are also language and cultural courses for aspiring massage practitioners seeking work overseas.

The training and professional quality test centres are located in all provinces. Since 2018, 11,945 people have enrolled in the nuad Thai course. Of them, 6,158 have passed. 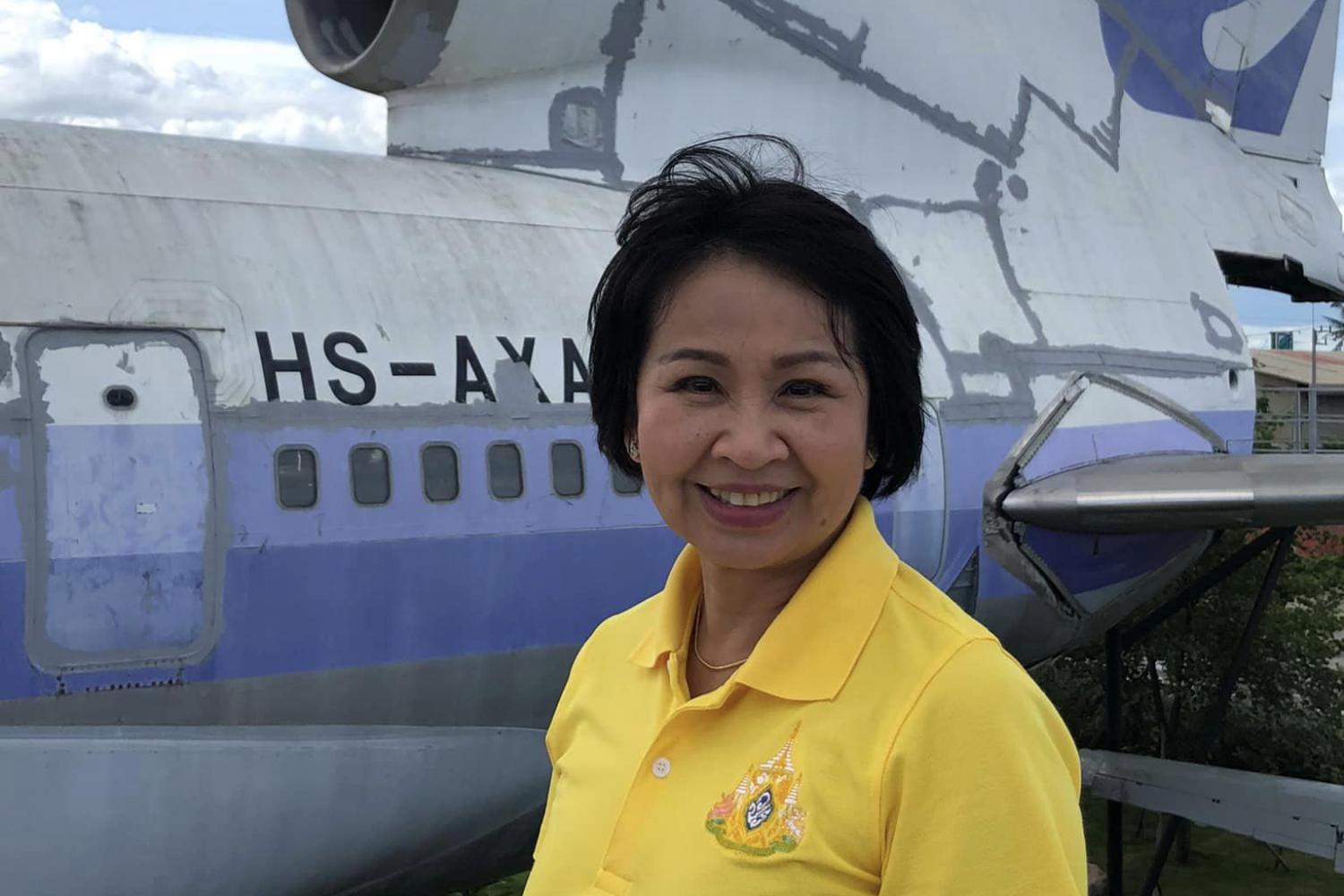 The school dates back to 1968 when it opened its doors for the first time to the study of traditional medicine and midwifery, although the knowledge that forms the kernel of the study is much older.

According to Unesco, the archives of Wat Pho hold a wealth of subjects, both religious and secular, recorded in a collection of 1,431 stone inscriptions in Thai language and scripts made in 1831-1841.

The subjects represent wide-ranging Thai knowledge in the context of over five centuries of global exchanges in trade, politics and culture.

It was a conscious effort by King Rama III of the Rattanakosin period and Thai scholars to preserve and make them visible to the public, with the ultimate aim of fostering general education in cultural heritage, diversity and civilisations, according to Unesco.

For this reason, the temple is dubbed the country's first university.

The practices and "knowhow" of Thai traditional medicine and massage even preceded the Rattanakosin period.

In fact, in the Ayutthaya kingdom, which existed from 1350 to 1767, is where traditional medicine and massage were established as a specialised department caring for the health of the monarchs.

According to the Three Seals Code, heads of the department were entitled to a feudal acquisition of vast tracts of land, which reflects the chief's high stature in the official echelon.

In centuries past, nuad Thai cemented its place as an important foreign exchange earner especially when the country's tourism-dependent economy is in desperate need of a shot in the arm.

Naruthai Jaisa-ard, 34, a traditional masseuse, told the Bangkok Post the wisdom behind nuad Thai, which has evolved through generations, was on display as a tangible and priceless asset for Apec leaders.

Despite hoping for a steady recovery in tourism battered by three years of the Covid-19 pandemic, she insisted a return to normalcy won't happen overnight.

"It will take some time before overseas visitors come back in full swing and fill traditional massage shops again," she said.

She said the Apec summit spurred an interest among visitors in nuad Thai.

Boon Thammayan, 56, security guard of a private company, said people in the nuad Thai business might be keeping their fingers crossed as they monitor the unfolding Covid-19 situation.

Visitors may have reason to be unnerved despite the first patient, diagnosed with the XBC Deltacron strain of Covid-19 in Thailand, having now been cured. The patient did not experience severe symptoms. The XBC is a hybrid of the Delta and Omicron BA.2 variants.

He said nuad Thai should change with the times so it can come across as a safe and easily-understood procedure. "We also should differentiate Thai traditional massage from other types of massage offered in other countries. The distinction can ramp up our selling point," Mr Boon said.

Srirat Banyen, 45, a tour guide, said nuad Thai could be a promising trade in an ageing society where older people might find the traditional massage both restoring and reinvigorating.

Many Japanese visitors arriving in the kingdom are elderly and travel in packaged tours with a fixed itinerary. However, some have been eager to take their time out to try nuad Thai while they were here.

"Some came away impressed with the service and wanted more of the same," she said, warning that nuad Thai wrongly portrayed as a massage that comes with "extra" services could quickly ruin its image which took years to build.

Overseas visitors who gave nuad Thai a try agreed it was a worthwhile experience. Seito AkiyoShi, 68, from Japan, said he has had a Thai traditional massage in Japan before. But he was impressed by the authentic massage offered at Wat Pho.

Tanaka Mariko, 60, an office worker on holiday in Thailand, said she had a foot massage and it took care of her chronic foot pain.

However, she said she could not tell the difference between the various styles of traditional massage which apply weight on different parts of the body.

Three years of Covid-19 was enough for Ms Mariko and her husband to book their holiday and pack their bags when it was announced that Thailand was welcoming back tourists.

She said when she heard from the news that nuad Thai was available at the Apec summit, it instantly grabbed her attention.