In the urgent interest of flood control most residents of makeshift homes built above Bangkok's clogged canals will be moved, the only question is how?

Obstructions along canals in Bangkok and nearby provinces are commonly cited as a major factor behind this year's flood disaster. However, clearing them has proved a thorny issue for authorities as it means not only removing debris and sediment, but also tearing down people's makeshift homes.

The extensive canal system offers drainage during heavy rains and flooding. But most area canals, or khlongs, remain severely clogged in part due to squatters' houses along and especially directly over them, obstructing the flow of water to the river.

Authorities have been struggling with the problem of khlong encroachment for decades. It starts with poor people building homes on public land alongside canals and then spills onto the polluted waterways with structures built on stilts. As more poor people come to live in Bangkok, the original encroachers allow newcomers, mostly relatives and friends, to build houses in the water in front of their houses in return for a small amount of money.

Authorities have tried in the past to evict or relocate squatters living directly over the canals, but these efforts invariably stall and fizzle after a failure to find other suitable living quarters. This year's flood disaster has brought a new sense of urgency to the problem and there is now little doubt that these structures obstructing water flow will be removed _ the only question is whether this will be done easily or with difficulty.

Leaders of squatter communities generally agree that houses built directly over waterways need to be removed, but they also say that most of the people living in them have nowhere else to go and cannot afford to relocate.

A Bangkok Metropolitan Administration (BMA) official, who asked not to be named, pointed out that individual districts are authorised to solve problems with canal squatters in their areas. ''Under the Public Place law, the Local Administration law and other regulations, the district administration can evict them,'' said the official. But he added that the districts ''prefer negotiation and lawsuits, which take time''. Meanwhile, the BMA continues to build dykes along canal banks, not only to stave off erosion but also to prevent encroachment along the water's edge.

A survey by the BMA's Irrigation Office in June of this year found that there were 6,239 houses encroaching into Bangkok's canals. Of these, 1,736 were in Chatuchak district, 1,469 in Sai Mai district, 363 in Watthana district, 269 in Saphan Sung district and 248 in Don Muang district.

Over the years a loosely organised network of canal communities has emerged, with members trying hard to prove that they can improve the waterways by collecting garbage, installing small wastewater treatment facilities, and other measures. However, Manop Jongkasemtham, a member of the committee for the Chai Khlong Bang Bua community, says the groups have been facing an uphill battle due to the growing number of people living directly over canals.

Mr Manop, whose squatter community is one of 13 along the Bang Bua canal, also blamed authorities for allowing these encroachers to multiply.

''Take the Prem Prachakorn canal as an example. Now people on the two sides of the canal can almost shake hands. Only a small space in the middle is left for the water to flow,'' said Mr Manop.

''They have electricity and tap water, which improves their living conditions. But on the other hand, it proves the failure of the authorities in dealing with the problem from the start,'' he said.

Mr Manop said that the Community Organisation Development Institute (CODI) introduced the Ban Mankhong (housing security) concept in 2003 to come up with solutions to the problem of crowded communities encroaching on land.

He said the programme has had some encouraging successes in canalside communities, but it needs the cooperation and commitment of residents. The Finance Ministry's Treasury Department, which owns most land along the canals, is also involved in the scheme, and would like to settle the encroachment problem by granting long-term land rental agreements with communities.

Mr Manop explained how the system works in his community. ''The Treasury Department rents the land to the community. The land has been newly blocked and designed to accommodate 342 families. Each plot covers 15 to 17 square wah [68 square metres],'' he said, adding that the two-storey Ban Mankhong style house is suitable for such a small land plot.

The rental fee is 1.50 baht per wah per month, with each each house paying less than 20 baht a month.

Those who oppose the scheme usually claim they are too poor to pay the rental fees, low as they are.

''They have stayed for free for a long time and neither the Treasury Department nor the authorities have taken any harsh measures against them, so they take it for granted that they can keep on that way without any problem,'' he said.

OPEN TO DISASTER: Canal squatters were among those most seriously affected by the floods.

For those wishing to build a new home, the CODI provides a low-interest loan of 150,000 baht per house. Buyers have 15 years to repay the loan. Another benefit is that the Social Development and Human Security Ministry allocates 45,000 baht per house to build build infrastructure in the new community.

However, some squatters say they do not want to get into debt, and many say that they do not earn enough to pay off the loan, said Mr Manop. But he feels this is just an excuse to refuse taking responsibility for themselves.

''The scheme benefits not only the authorities and the environment, but also the encroachers, as they gain housing security and stability,'' he said.

After initial success in the Bang Bua community, a network was set up including communities along nine other canals, mostly in the northern part of Bangkok. These are Bang Bua, Prem Prachakorn, Bang Khen, Lat Phrao, Ong Ang, Lam Nun, Hua Lamphong, Khlong Thung and Khlong Sawan canals, all of which have been encroached upon for a long time and are severely polluted.

Kanoksak Vipaskanok, a member of another Khlong Bang Bua community committee, said: ''Bang Bua is kind of a model for other canal communities despite the fact that some areas along the canal have not yet achieved the goal of moving all canal squatters onto the land. But every community has a committee and a community process to convince residents of the positive consequences of the scheme.''

The main objective is to convince those living over the water to move onto the land along the canals. At the same time, those occupying land along the canals have to be willing to share. The communities beside Khlong Bang Bua are in different stages of compliance. Some are gradually changing while others resist. ''It takes time to convince people to understand the long-term benefits not only to society as a whole but also to themselves,'' said Mr Kanoksak who has long been involved in his Bang Bua community group.

Komin Sarnpan, 65, said that he had formerly squatted illegally on a large area along Khlong Bang Bua, but he is now happy to share some of it with people who have abandoned their homes built into the water. He thinks the present arrangement will mean housing stability for his own family and others.

Mr Manop agreed, adding that any changes should be on a voluntary basis. In his own community change has come slower. Even after years of working with community members, only 50% of the squatters over the canal, a total of 342 houses, have moved onto the land.

''We need to invest for our housing, for land security and infrastructure and better living conditions for our children. Living in the squatter community is difficult because of the lack of infrastructure, like roads to take sick people to the hospital or to put out fires.''

Mr Manop said that the authorities should enforce the laws, as this would help squatters reach a decision on whether to stay in their communities or face eviction.

He feels authorities are reluctant to use the threat of eviction to force positive change, but have less problem turning people out of their homes in the name of progress or as part of flood control measures.

A total of 380 houses in one of the Khlong Bang Bua communities _ Ruam Mitr Satta community in Don Muang district _ are facing eviction to pave the way for the planned new BTS building. The canal community network is trying to work with the residents of Ruam Mitr Satta and suggested that they employ the Ban Mankhong concept and rent land from the Treasury Department. As yet no community members have agreed to share their land with those being evicted.

''Under these circumstances we can't do much to help them,'' said Mr Manop.

He added that in light of the plans for the widespread dredging of Bangkok's canals, the experience of the Ruam Mitr Satta community should encourage others to make a decision on their own fates as soon as possible.

If they don't, it seems probable that the authorities will make the decisions for them. 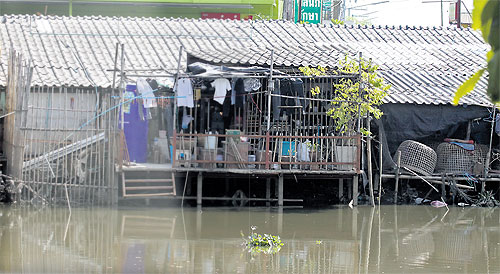 LIVING ON THE EDGE: Most squatter communities along canal banks are plagued by unhealthy living conditions. PHOTOS: TUNYA SUKPANICH