Rohingya in the region are confined to designated areas while all around them monks and authorities stoke anti-Muslim sentiment. And this disdain for the group seems to be receiving the tacit approval of the majority of Myanmar people — with even Aung San Suu Kyi silent

Sittwe, the capital of Rakhine State in Western Myanmar, has become a city full of stray dogs. Hundreds of them roam the streets abandoned by their owners, who were among the thousands forced to take refuge in camps for internally displaced people or otherwise relocate after a murderous wave of sectarian violence between the Buddhist Rakhine majority and the Muslim Rohingya minority erupted in the region two months ago. 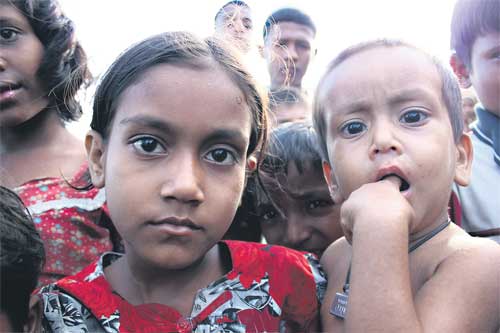 The violence started after it was reported on May 28 that a 26 year-old Buddhist woman had been raped and killed by Muslim men. Three Muslim men were detained the following day.

The case lit the fuse for communal violence in the area and on June 3 about 300 Buddhists attacked a bus in Taungup, killing 10 Muslim men, reportedly in front of policemen and soldiers who did not intervene.

According to a recent report by Human Rights Watch, security forces stood idly by at the outset of the violence before they began shooting at the Rohingya. At one point the conflict even threatened to spread to the rest of the country, prompting the government to declare a state of emergency in Rakhine State.

Official estimates put the overall death toll at 78, a gross underestimate in the opinion of several human rights groups. Thousands of Rohingya refugees tried to flee to Bangladesh, only to be blocked, and sometimes shot, by Bangladeshi security forces. Now there are around 70,000 displaced people in the region, most of them Rohingya living in villages or camps around Sittwe, but also Rakhine people, mainly sheltered in Buddhist monastery camps.

"The city is now getting back to normal. Everything is peaceful and quiet now," said a local member of Aung San Suu Kyi's National League for Democracy party, who, like many others in Sittwe, refused to be identified.

His assessment seems correct at first glance. Apart from the curfew imposed by authorities, a sense of normalcy prevails downtown.

However, that impression changes the further out one moves. All around the city, vast neighbourhoods were burned or destroyed during the riots. One of these is Narzi, a Muslim-majority quarter with a population of 10,000 on the outskirts of Sittwe. After being evacuated by authorities, it now gives the impression of a city devastated by a natural disaster or war. Its streets are deserted apart from the stray dogs and buildings on huge swathes of land have been razed to the ground by fire. 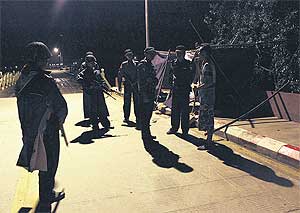 SECURITY STOP: A checkpoint at the entrance of Sittwe set up after the imposition of a night-time curfew.

But the most stark reminder of the violence in Sittwe, a city where Muslims once accounted for as much as 40% of the population, these days there is not a single one to be found on most of its streets.

According to the official narrative the Myanmar government is playing the role of "a good referee" in Rakhine State.

In a report leaked to AFP, President Thein Sein stated that "political parties, some monks and some individuals are increasing the ethnic hatred" against the Rohingya in Rakhine State. The comments came just one month after he publicly called for the expulsion of the Rohingya from the state.

However, the official view is that security forces from Yangon are less biased towards the Rohingya than their counterparts in Rakhine State and have been sent there to separate both communities to prevent further violence.

But the situation on the ground tells a different story. Security forces have not merely separated the two communities; they have confined the Muslim population into specific areas: internally displaced person camps outside the city and small ghetto-like quarters heavily guarded by the police and army. And while the rest of the population can move freely, Muslims are confined to their designated camp or specified areas.

The conditions are dire in Muslim camps like Tat Kal Pyin. A clutch of buildings in the middle of an area reserved for the Rohingya, it houses 3,100 people,  living in cubicles of three square metres for each family. The World Food Programme, with the assistance of donors and the government of Turkey, supplies food for the refugees, but some children there show signs of malnutrition.

The Muslim quarters are off-limits for visitors and journalists, but some residents there said by phone that they don't receive any aid and, as such, their supplies are exhausted and they are forced to buy food from the police at as much as 10 times its market price. They also claim that they do not have access to medical care because most Rakhine doctors refuse to treat them.

The Myanmar government has not announced any plans to end the confinement of the Rohingya. Meanwhile, the number of refugees in Rakhine camps is dwindling as they return to what is left of their normal lives. Many of them believe that the economic impact of the recent violence will be felt for a long time.

There is a pervasive siege mentality in the Rakhine community and a deeply embedded fear and hatred of the Rohingya and Muslims in general in Sittwe, with damning rumours about them constantly circulating throughout the city. 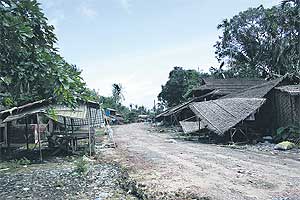 Some Buddhist monks Spectrum spoke to were keen to spread such rumours.

U Chuzarthar, the abbot of Budawmaw monastery in the city, said that the Muslim community in Rakhine State has been infiltrated by al-Qaeda and other extremist foreign organisations.

To prove his point, he showed a VCD featuring images of violence and "Muslim extremists", among them a picture of the Thai army detaining insurgents in southern Thailand. He claimed, however, that it was the Myanmar army and that nobody was able  to trace the source of the video.

U Pinnyarthami, the abbot of another monastery, said that he believed al-Qaeda was using  international NGOs working in the area and the United Nations to supply local terrorists with weapons.

His comments were symptomatic of the widespread distrust among the Rakhine towards international NGOs and the UN, who they believe work exclusively for the Rohingya and neglect the Rakhine people, who also suffer in Myanmar's second poorest state.

Tensions between the two communities have been simmering for decades in Rakhine State, occasionally boiling over into sporadic episodes of violence. These episodes have often been provoked by the government in a bid to divert attention of political problems.

Rakhine natives and large sections of the rest of the country's population view the Rohingya as illegal immigrants from Bangladesh poised to invade the country and establish an Islamic state in Rakhine.

Abu Tahay, the head of the political department for the National Democratic Party for Development, a Rohingya party, denies this accusations: "This is a totally fabricated accusation by some racist politicians. There is no organisation trying to establish a Rohingya state. We are only looking for ethnicity and to qualify for citizenship."

At the heart of the problem lies Myanmar's 1982 Citizenship Law, which only grants citizenship to those who belong to one of the 135 "historical ethnicities" that were  in Myanmar prior to 1823, when the British conquered the southern part of the country. 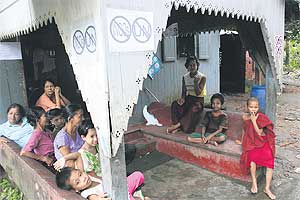 TAKING SHELTER: Above, Rakhine people at a Buddhist monastery in Sittwe.

There is much debate among scholars about when the Rohingya arrived in Rakhine State, but there is no doubt that they have been there for generations. In 1820, for example, British ethnologist Walter Hamilton referred to the "Rooinga"  as "the Mahommedans [sic] who have been long settled in the country".

Regardless, the Myanmar government contends they arrived much later, making them ineligible for full citizenship.

As a stateless people, it is virtually impossible for most Rohingya to prove that they or their ancestors were born in Myanmar. They do not have freedom of movement, cannot marry without permission from the authorities and their religious freedoms are severely restricted.

The recent wave of sectarian violence broke just before Aung San Suu Kyi made her first trip to Europe in 24 years.

The Nobel Peace Prize laureate has thus far avoided taking a clear position on the issue, except to say that she doesn't know if the Rohingya should be considered Myanmar nationals and that "we are not certain exactly what the requirements of citizenship laws are". It is commonly assumed abroad that Mrs Suu Kyi does not want to take a pro-Rohingya stance for fear of alienating voters prior to elections scheduled for 2015.

While Mrs Suu Kyi has remained silent, other members of her party have not.

U Win Tin believes that "we have to keep our citizenship law very tight". He refused to comment specifically on the 1982 law, but said: "We can worsen the problem if we change the law now. The problem must be solved according to the law, maybe the 1982 [legislation], but if that law is not enough we will have to change it."

He also suggested a solution to the crisis: "The problem are these Rohingya foreigners and we have to contain them one way or another; something like what happened in the United States during World War II with the Japanese. The US government contained them in camps and after the war they were sent to Japan or they could apply for citizenship. We can solve this problem that way.'

"My position is that we must not violate the human rights of these people, the Rohingya, or whatever they are. Once they are inside our land maybe we have to contain them in one place, like a camp, but we must value their human rights."

Nyo Aye, one of the members of the NLD's Rakhine State commission, said she agreed with the proposal of President Thein Sein to put Rohingya people in camps managed by the United Nations High Commissioner for Refugees until they can be sent to other countries. She also stated that the Rohingya "migrated from Bangladesh, so they are not our ethnic people," and added that "this conflict is related with foreign Muslim extremists".

Some in Myanmar defend the Rohingya. Among them is the famous comedian and political activist Zarganar, the monk Ashin Gambari, a leader of the 2007 "Saffron Revolution", and Htuu Lou Rae Den, a young Buddhist from Yangon who has launched a campaign called "Coexist", advocating peace among Buddhist and Muslim communities in Rakhine State and throughout the country.

Nevertheless, such voices are in the minority in a country where Islamophobia runs deep. And it is likely that much of this anti-Rohingya sentiment stems from a general consensus on ethnicity as it pertains to nationhood. As Myo Yan Naung Thein, an activist from Yangon and director of Bayda Institute, closely linked with the NLD, put it: "The military, Aung San Suu Kyi, the 88 generation students and the politicians, we all share the same opinion about national identity." 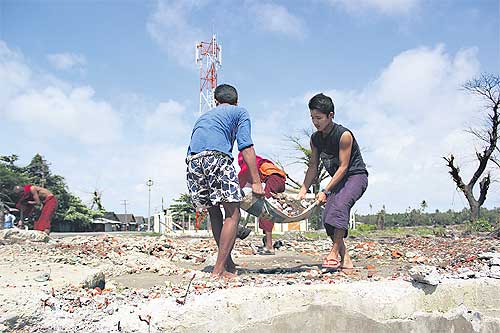 GHOST TOWN: Above, below and below left; Narzi, a Muslim quarter in Sittwe that was razed during recent violence. 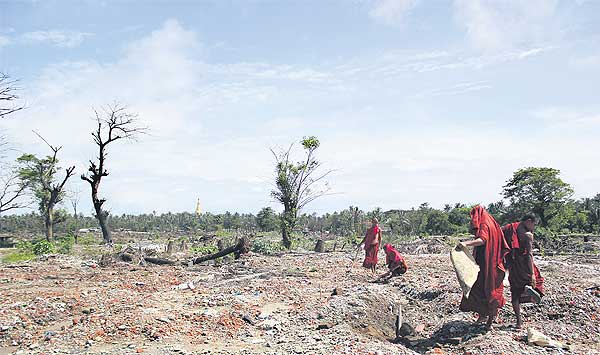