The reign and banishment of burma's final monarch

King Thibaw and Queen Supayalat ruled their kingdom from the intrigue-infused Golden Palace in Mandalay. Although their life in the palace was one of great splendour and opulence, it was complex and there was much to occupy their attention apart from the actual governance of the kingdom. Power struggles and politics were constant and vexing affairs. Customs, rituals and superstition dominated their existence. There were many religious and family functions that the king had to preside over himself. The queen had the additional daunting tasks of producing the all-important male heir, and ensuring the king did not acquire countless queens as his forefathers had. The king and queen lived as demigods during their seven-year reign, up until the war with Britain in 1885, which led to their defeat and exile. 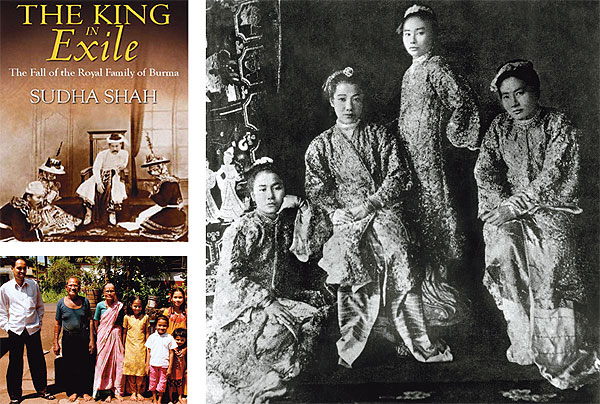 After his deposition, King Thibaw, the heavily pregnant Queen Supayalat, their very young daughters, and the king's junior queen, were exiled to the remote coastal town of Ratnagiri in India, where they lived for over 30 years as state prisoners. The decision to exile the family to Ratnagiri was clearly made with the objective of safeguarding the interests of the British Empire. The kingdom was being added to the Empire and the British government wanted its deposed king tucked away as far away as possible to ensure his inability to stir up any mischief. Steadily and systematically their ties with Burma were undermined. Police officers specifically assigned to the family micromanaged their lives.

The family had been permitted to carry some of their jewellery and for several years was able to supplement their meagre government pension by the furtive sale of these items. But as they ran out of their valuables, the once proud and uncompromising king wrote endless and increasingly ingratiating letters to the British government requesting a larger allowance, better accommodation, and most poignantly, for the right to be addressed as His Majesty instead of His Highness, because, as he said, "I do not seek for shadow when I have lost the substance. But I feel it very much when they address me as His Highness, as it reminds me of my fall."

The king died on Dec 16, 1916, without ever stepping foot on his homeland again. In 1919, after the end of World War I, Queen Supayalat and her daughters were permitted to return to Rangoon. The British had been firmly in the saddle in Burma for over three decades, so the family was no longer perceived as a real threat.

The queen regained some of her former feisty spirit and humour in Rangoon as a daily stream of visitors came to sit reverentially before her. Each of the princesses had to adapt to a world that none of them had any knowledge of. The beautiful First Princess returned with her daughter from Rangoon to live in Ratnagiri. Her married lover, Gopal, who had been her father's gatekeeper, had begged her to return, but then did not honour his end of the bargain. Her isolation after the exile was therefore more pronounced than it had been during the exile. Not having gone through any "normal" process of socialisation while growing up, deprived of any education to stretch her mind and broaden her interests, and lacking any depth of knowledge of either the language or culture of the people of Ratnagiri, she was ill-equipped to make any appropriately friendly overtures or to find any way of integrating herself.

The Second Princess and her husband settled in the idyllic setting of remote Kalimpong (in Eastern India), where she and her adoring husband set about reinventing themselves. The couple quickly assimilated into its life and society, entertaining and being entertained.

Like her older sisters, the Third Princess's years of isolation and lack of education made her seem out of touch with reality, and bestowed on her a surreal aura of innocence. It was probably her simplicity and lack of exposure, says her son-in-law, that led her to fall in love with Hteik Tin Kodaw Gyi, a young handsome ladies' man, a minor prince, 17 years her junior. Her second marriage was to a man 17 years her senior.

The Fourth Princess was the most intelligent, independent and strong willed of the sisters. Although her sisters were more or less ignored by the government after the exile ended, the Fourth Princess was watched warily when she moved to Mandalay and was forbidden from interacting with Burmese nationalists, was not allowed to use her title (which for her was her name), and the government selected the school that her children were to attend. She stirred up a hornet's nest in the early 1930s by making a dramatic bid for the return of her father's kingdom. Not surprisingly, the British government came down like a sledgehammer and attempted to muzzle her by exiling her and her family to Moulmein, in Lower Burma. Here, distant from the influences and energy of the city that had been her father's capital, they hoped she would quietly settle down and not cause any more trouble. It was in Moulmein that the Fourth Princess met an untimely death that raised many suspicions. The children of the princesses, particularly those of the First and the Fourth Princesses, were also affected by the deposition and the exile. King Thibaw's descendants _ remnants of a once all-powerful dynasty _ today live ordinary lives in Myanmar and India.

Sudha Shah is the author of 'The King in Exile: The Fall of the Royal Family of Burma', published by HarperCollins India and available as a hardcover and e-book on Amazon.com. A Thai translation is forthcoming with Matichon. 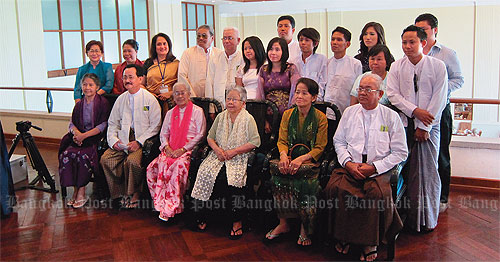 MINUS THE POMP: A photograph of descendants of the Third and Fourth Princesses taken with Sudha Shah, standing, third from left, in February 2012 at the Irrawaddy Literary Festival in Yangon.

PARIS: Liverpool eased to a comfortable 2-0 win in the 'Battle of Britain' against Rangers in the Champions League group games on Tuesday while Napoli underlined their credentials with an impressive 6-1 thrashing of Ajax in Amsterdam.