Leader of the pack

Canadian Dominique Rousselle spends one month a year giving Thai strays food, medicine and the chance of a new life

For one month a year, a foreign man on a green bicycle can be seen carrying two large bags of dog treats through the small alleys of Rama IV Road and the Lumpini Park area. Those who don't know him and happen to zoom by on the way to work may think that he is a typical tourist who enjoys feeding the homeless animals. But for people who live in those areas, he is looked upon as a guardian angel for strays. 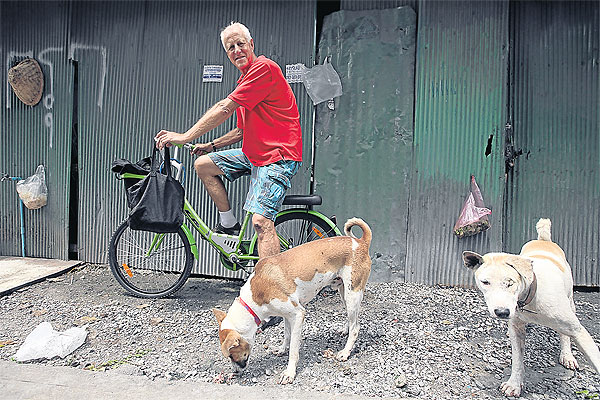 CANINE COMPANION: Dominique Rousselle, a 63-year-old from Canada, is seen as a guardian angel for strays in the Rama IV Road and Lumpini Park areas, making daily deliveries of food when he visits. PHOTOS: PATIPAT JANTHONG

''He is a very nice man. He comes around this area every day and feeds the stray dogs,'' said Sunee Saetae, a 55-year-old housewife who lives around Soi Suwan Sawat on Rama IV Road. Ms Sunee, an animal lover, has been taking care of the strays at the mouth of the soi for almost 20 years. In all that time, she had never seen anyone who was as committed to caring for the animals as the foreigner.

The man in question is Dominique Rousselle. The 63-year-old, originally from Paris, moved to Toronto 25 years ago with his mother. Mr Rousselle is a retired teacher who visits Thailand once a year for a month.

Whether he is in Canada or Thailand, he loves to take care of homeless dogs. Back in Canada, he is a volunteer for the Toronto Humane Society, where he takes abandoned old and sick dogs to the shelter and helps find them a new home.

In Thailand, he volunteers on society's behalf to take care of the stray dogs on the street.

Mr Rousselle told Spectrum that he has been doing this for more than 10 years, starting his rescue efforts in Toronto. His love and compassion for the abandoned animals only grew, and he started to devote all of his free time to the poor dogs.

''I think it doesn't take much to help the sick dog that's full of ticks and fleas, so I help them all,'' Mr Rousselle said.

He said that back at home in Toronto, the main problem is owners killing old or sick dogs. His job there is to prevent that, and find new homes for any sick, old or aggressive dogs that come his way.

When he first came to Thailand as a tourist, he saw that the stray dogs here are in much worse condition than those in Canada. He started off in Pattaya, mostly dealing with dogs that are in poor condition. The first one Mr Rousselle treated in Thailand was from Pattaya, a blind and ailing animal he brought back to Bangkok by taxi. It took an entire month of treatment at an animal hospital before the dog recovered.

Mr Rousselle not only feeds dogs daily whenever he stays, he also treats infection, blood parasites, worms, fleas and ticks. He takes dogs to veterinarians for major treatments, such as amputations. His main goal, however, is to neuter as many dogs as possible so they don't reproduce and create more problems for society.

Mr Rousselle can also give simple care, such as providing basic medicines like worming tablets or treating skin diseases. Although he has no professional training, he used to work with a woman from the Soi Dog Foundation who taught him how to deal with mange, fleas, ticks and more.

''Now I can treat dogs with different conditions, such as infection and blood parasites,'' he said.

FROM HIS OWN POCKET WITH LOVE

Mr Rousselle has been doing all this out of his own pocket from the very beginning. Even back in Toronto, he has to cover all expenses if he brings dogs to the shelter where he volunteers. For that first hungry stray in Pattaya, he bought chicken and cut it into small pieces. He soon realised the dog was in such a bad condition that feeding would not be enough.

''I started to buy pills and treated one dog. From one dog it became more and more. Now I feed and treat at least 40 dogs per day,'' he said.

After giving the dogs primary care, they are usually in slightly better health when he takes them to the veterinarian. He buys any medicines needed with his own money. If the dogs need proper treatment by a vet, he will take them to Sukhumvit Veterinarians on Sukhumvit Soi 51, where he gets a special rate for being a regular customer.

''I bring them at least five to 10 dogs every week to treat and to neuter,'' Mr Rousselle said.

The male dogs only require one day at the hospital to recover, but female dogs have to stay four to five days at 200 baht a day.

Every morning, Mr Rousselle rides his bicycle from Soi Suan Phlu to the Rama IV area. His route takes him from Soi Nawin on Chua Phloeng Road, under the expressway and on to Soi Suwan Sawat and Lumpini Park, feeding dogs along the way. Along with a 1,000 baht bag of dog food that lasts a week, he also spends about 450 baht a day on chicken.

''I buy 8kg of chicken bone per day to cook for the dogs, which I pay 245 baht for. I also have to buy 1kg of chicken liver for 110 baht. Sometimes when the dogs don't take their medicine, I will put it in the liver and let the dogs eat the whole thing.''

Every time Mr Rousselle comes here, he takes some dogs back to Toronto for adoption and to keep with him at home.

On Soi Suwan Sawat, Ms Sunee couldn't stand seeing stray dogs being treated poorly. Her compassion prompted her to take more than 20 stray dogs to an empty plot at the start of the soi. There, they all stay together on the abandoned land, which is surrounded by a green tin fence.

''I have taken care of more than 20 dogs for almost 20 years,'' she said. ''When my husband was still alive, I had a lot more money to feed the dogs. I bought them minced chicken from the supermarket and cooked it with rice. Then I went behind the wall to feed them every day after 3pm.''

With a limited budget after her husband passed away, Ms Sunee was forced to cut down on the amount of dog food she could provide, but she does her best to ensure her dogs are always well fed. Last year, she heard from a neighbour that a foreign man was coming by every day to feed her dogs. Ms Sunee had been hearing about Mr Rousselle for more than a year, but it wasn't until recently that they were able to meet.

''I first met Dominique this year. I am so happy to know that my dogs are being taken care of,'' Ms Sunee said. ''The owner is turning this empty land into a mega condominium. That means the dogs will no longer have a place to stay. Dominique has already taken some of my dogs back to Canada and he is going to take three back this time. He told me he will come back next year in March to take the rest of the dogs home.''

Ms Sunee had feared that construction workers would kill and eat her dogs, because she heard that had happened on Soi Nawin. Instead, she is relieved to know that thanks to Mr Rousselle they will end up safe and in a good home.

The sight of a farang feeding dogs on a bike raised a few eyebrows, and one middle-aged woman who sweeps the street in front of Soi Nawin admits that at first she was unsure of Mr Rouselle's true intentions. She did not trust him when she first saw him. Although the dogs are strays, she had been feeding and taking care of some dogs there.

''My favourite puppy that I took care of went missing and I didn't know where he had gone,'' the woman said. ''I found out later on that the foreign man had already taken the dog back for adoption in Canada. I am quite pleased to learn that the puppy now has a good home to live in.''

She said there had been positive changes with the stray dogs in the area, and they are noticeably less aggressive and have become more friendly to residents.

Many people have encouraged Mr Rousselle to open his own shelter or foundation, but he thinks he is too old to be thinking about anything so formal. He would rather work with another foundation to run a clinic and hire vets to treat the animals. He would offer to pay half and the foundation would pay the other half. He also advocates a neutering programme for Bangkok in order to control the city's dog population.

Mr Rousselle is thankful for the Thai people who have compassion for the strays. He promises to take care of as many dogs as possible while he still can, and next on his agenda is taking three dogs from Soi Suwan Sawat to a shelter in northern Ontario in March. Fortunately, the Toronto Humane Society welcomes all stray dogs from Bangkok, having already accepted 12 in the past few years.

''If one day I get too old to go around on the bike to help these dogs, I still want to take care of the dogs, even if it is only one or two. At least I get to help them,'' he said. 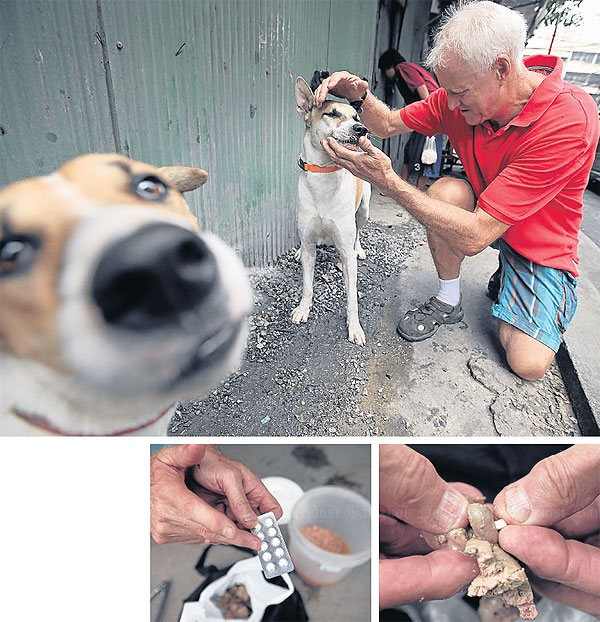 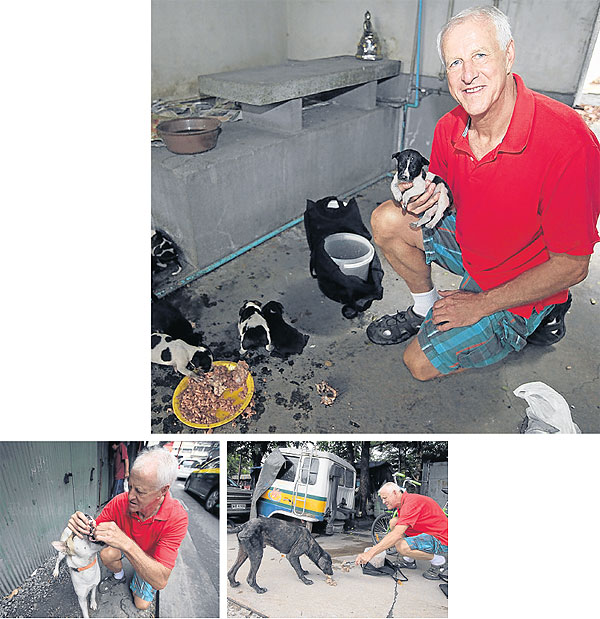 PUPPY LOVE: Below, from left to right, Mr Rousselle gives a dog medicine hidden in chicken liver. Above, left and right, he cares for strays.