Pot heads of the surfing gods

A new book not only sheds light on the old marijuana trade from Southeast Asia to the US, but lights up nostalgia for the region before the Vietnam War

For some, it was the time of their lives. Chasing double overhead barrels along the exotic surf beaches of Bali, where a few dollars would buy an abundance of marijuana and a lifestyle that was the stuff of big wave legends. 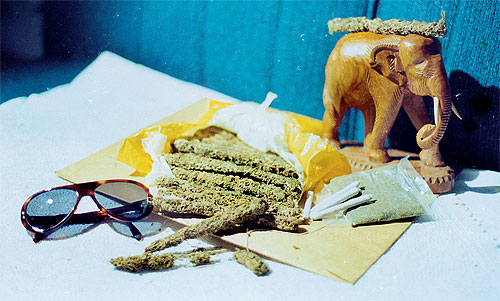 SMOOTH SMUGGLING: Buds from high grade marijuana were rolled and tied into ‘Thai sticks’, which put the smugglers on Easy Street.

Young surfers from California, Hawaii, Australia and elsewhere toured the beaches and went searching for ways to underwrite their lifestyles. They dabbled in pot and soon discovered a lot of money could be made by exporting the product to the US.

It was the 1960s, the Vietnam War was about to enter high gear and Southeast Asia had become awash with hippies, ex-servicemen, draft dodgers and drifters, surfers and backpackers looking for an adventure and willing to risk what little they had on what was then an inoffensive drug industry.

Surfboards were hollowed out, suitcases with false bottoms were built, yachts were bought and all were initially stuffed with hash. That changed when Thai sticks, which consist of buds from high grade marijuana rolled and tied into sticks, emerged and put the smugglers on Easy Street.

''Having worked Mexican marijuana before, I realised how much more Thai marijuana was worth,'' said Jim Conklin, an agent with the US Drug Enforcement Administration (DEA). ''I think in those days it was selling for about US$2,000 a pound. ''We were used to Mexican grass, which was maybe $100 a pound. Probably a drug trafficker could make more in Thai marijuana than any commodity in the world, more than gold, more than anything.''

Shipments of 10 tonnes worth $30 million each were not uncommon as the smugglers' work stretched from the 1960s through the '70s and '80s when the authorities finally gained the upper hand after the Reagan administration ordered a crackdown. For many, the wild parties and lavish lifestyles ended in lengthy prison terms.

US author Peter Maguire is as comfortable in big waves as a surfer as Mike Ritter was when smuggling drugs across the Pacific Ocean. Together they have written a fantastic tale, Thai Stick: Surfers, Scammers and the Untold Story of the Marijuana Trade.

Throughout, Maguire and Ritter are sympathetic. After all pot was considered a soft drug and those smuggling it would be likened to Robin Hood when compared with the American mobs and Mexican drug cartels which would ruthlessly run the cocaine and heroin rackets that followed.

Among the wackier dealers was the Brotherhood of Eternal Love _ a messianic utopian movement that took massive amounts of LSD and used profits from the sale of Thai sticks to support their free distribution of acid across the US. ''By the mid-1980s, marijuana was the number one cash crop in the United States thanks to a huge demand and an artificially high price,'' Maguire told Spectrum. ''As everyone from economist Adam Smith to the Thai politicians who were pressed by the US government to crack down on pot have pointed out, political laws will always be less powerful than the economic law of supply and demand,'' he said while noting the contradictions of the day.

''The Reagan administration reinvigorated the war on drugs in the early 1980s and marijuana went from almost legal to very criminal. That is very ironic because Reagan claimed to be a libertarian and free marketer, and according to their own ideology, individual rights are sacrosanct.''

Of the bigger fears faced by the smugglers were the Khmer Rouge, who had taken control of Cambodia and cut it off from the rest of world while carrying out a genocide that would account for the deaths of about two million people.

Michael Deeds and Chris Delance were clean-living friends from schooldays in Long Beach, California. Allured by promises of adventure in the Far East the pair attempted to smuggle a boat load of weed across the Gulf of Thailand and the Pacific Ocean, but their plans went wrong and their boat strayed off course _ into Cambodian waters, where they were arrested and taken to the dreaded S-21 torture and extermination camp in Phnom Penh. They died just weeks before Pol Pot was ousted by an invading Vietnamese army.

Maguire said his relationship with Mike Ritter, who was jailed for drug smuggling, was always good but that friendship grew into one of absolute trust and enabled the book to be written. ''After he went to prison and sent me all of his research, I found out just how amazing a researcher he was. We never differed on the book's content, we never wanted to pander to whims of Hollywood or commercial publishers,'' Maguire said.

He said the smugglers which were interviewed were at first coy, however, many were also Ritter's former co-conspirators. They had already established some kind of trust through him. ''The interview process was cathartic for men who had led secret lives and could finally talk,'' Maguire said. ''By far the most amazing thing has been the number of ageing surfer smugglers who have come out of the woodwork to embrace our book.

''One major smuggler showed up at a book signing in California. He spent 14 years in both Thai and American prisons and although he did not want to be interviewed, he came to shake our hands and tell us that he thought the book was fair and accurate,'' he said.

Maguire and Ritter also shared similar experiences with the men sent to capture and jail the smugglers. ''Although we respectfully disagree on the dangers of marijuana, the retired DEA agents we interviewed thought the book was fair and concede that compared to meth and cocaine, the Thai marijuana trade looks positively innocent.''

What makes Thai Stick a great read is that the authors successfully capture the imagery of idyllic beaches and surfing which makes this all the more memorable for those who can remember the era. It also serves notice on the American war on drugs which would put thousands behind bars and cost billions of taxpayers' dollars without making a dent on pot sales in America.

''American law enforcement is basically in the same place the US military was in Vietnam during the early 1970s. They have conceded defeat in the war on pot and they are now looking for a face-saving way out,'' Maguire said. ''However, there is none as it was a massive waste of time and resources. Today pot is basically legal in California and the marijuana industry is growing more quickly than even the tech sector.'' 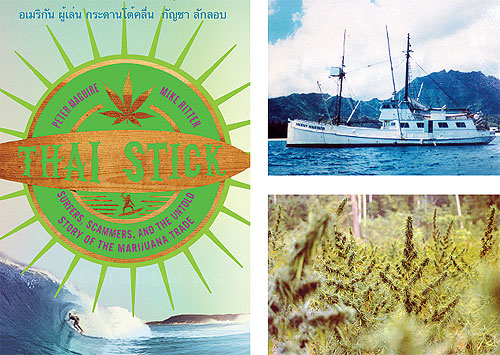