Sibling rivalry turned deadly in the squabble over the Thammawattana fortune, but after 48 years and just as many lawsuits the survivors have reached a settlement

In July 1966, Arkom Chatchaianand, the man who helped found the Thammawattana family fortune, was shot in broad daylight after a group of gunmen burst into his office at Ying Charoen market near Don Mueang airport. 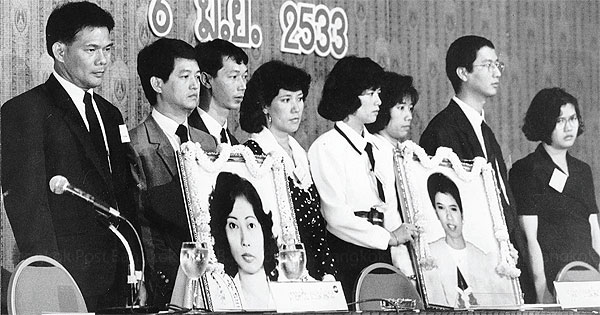 strong denials: Hangthong Thammawattana, second left, stood with his siblings at a press conference at Bangkok’s Shangri-La Hotel on June 6, 1990, to deny having anything to do with the deaths of the two sisters pictured in the frames.

Arkom’s fourth wife, Lakhana Chatchaianand, died at the scene while the couple’s baby slept on the floor.

Arkom, who was then living with his third wife, Suwapee Thammawattana, later died in hospital from his injuries.

Over the next 48 years, an internecine public feud has played out over the 10-billion-baht family fortune, resulting in multiple murders, assassination attempts, a disappearance and a suspicious suicide of an MP many to this day still believe is murder.

Key players in the saga of one of Thailand’s wealthiest families have included prominent politicians, as well as the country’s own celebrity forensic pathologist and a US expert who testified in the OJ Simpson case.

After all the bloodshed and legal wranglings, the Thammawattana drama appeared to reach a conclusion last week when the warring factions agreed to settle 48 lawsuits, five of which were criminal, relating to the inheritance feud.

“What’s important is the family is at peace again,” said Parinya Thammawattana, adding that the settlement was “beyond my expectations”.

After Arkom’s murder his third wife, Suwapee, who had nine children with him, became the matriarch of the clan. A 10th child, Thaniya was later adopted by Suwapee.

In 1955, the matriarch had established the 30-rai Ying Charoen market which lies at the heart of the inheritance dispute.

Suwapee was shot and paralysed in 1979 while returning from court. At the time she was involved in disputes with vendors at the market over higher rents and was also in conflict with a brother-in-law over its management.

After she was shot, Supawee travelled to the US for treatment and appointed her third child and eldest daughter Kusuma to run the business.

In 1982, Kusuma was shot dead in broad daylight while collecting rent at Ying Charoen market. A shooter from Phichit province was arrested over the murder and implicated the brother-in-law and his two daughters over the killing. They were convicted and sentenced to death but later released by the Supreme Court.

Supawee succumbed to cancer in 1990 at the age of 60, but before her death she urged her children not to squabble and remain united.

To confuse matters, Supawee had five wills and another two later proved to be fake.

The will the surviving siblings eventually agreed to was written in 1988, the year the family entered politics at the village level. The late prime minister Samak Sundaravej, then leader of the Prachakorn Thai party, was appointed one of the will’s executors.

Under the will, all 68 plots of land at Ying Charoen market were to be transferred to Suwapee Thammawattana Co, with all children holding equal shares. Sales of shares to outsiders were forbidden.

The other wills, including the two forgeries, cut out three daughters — Kanungnit, Naiyana and Nongnuch — from the inheritance.

In 1988, the eighth daughter Naiyana married Pol Lt Col Samarn Tamprakob in defiance of her mother. She was disowned by her mother and cut out from the estate. After Supawee’s will was disclosed on May 3, 1990, the siblings agreed to put Naiyana back on the list of heirs.

A few days later, Naiyana disappeared mysteriously and was later found strangled, handcuffed and shot dead in a car in a jungle in Kanchanaburi. A year later, Therdchai Thammawattana, a son of Suwapee from a previous marriage also involved in the running of the market, was abducted from Don Mueang airport on his return from Chiang Mai. His body was never recovered.

At the time, police suspected Therdchai might be involved in Naiyana’s death. Two policemen alleged to have been involved in the abduction of Therdchai and close to the Thammawattana family were killed. One was shot dead and the other run down by an 18-wheeler truck.

The oldest surviving son Hangthong, born in 1949, took over as head of the family. In 1995, he was elected a Bangkok MP for Samak’s Prachakorn Thai Party. He wielded the most influence over the family estate shared equally by the siblings.

But by 1999, the children — according to one sibling — were still squabbling over the will and whether the adopted daughter, Thaniya, should receive an equal share.

On Sept 6, 1999, about 3am, Hangthong was found dead with a gunshot wound to the head and a .38 revolver in his right hand at the family mansion in Bang Khen. His body was in a padded armchair in the bedroom of his younger brother Noppadol. The two men had earlier reportedly spent hours discussing the management of the family estate.

Mr Noppadol said his brother had killed himself because he was unable to talk other siblings into having Thaniya receive her share of the inheritance.

But other siblings, including Mr Parinya, believed Hangthong was murdered as a result of longstanding conflicts over the 10-billion-baht inheritance.

“We do hereby announce that we will never commit suicide for any reason,” Mr Parinya said at a press conference in October, 1999.

It was no secret that Mr Noppadol was not on the best of terms with his late brother. He claimed that Hangthong had squandered family money to finance his political ambition in the Prachakorn Thai Party.

Hangthong had the approval of the family to take care of the inheritance while his sister Ms Kanungnit was entrusted to manage Ying Charoen market.

Hangthong worked closely with Samak as one of the appointed executors of the will.

Mr Noppadol and Malika Leelapan, his younger sister and a lecturer at Kasetsart University, petitioned the Civil Court to remove them. They claimed the two had been negligent, resulting in the misuse of assets by other heirs. The brother and sister also launched several fraud actions against the other side, including Hangthong.

The circumstances behind Hangthong’s death remain a mystery until this day.

Although a police ruling initially determined that he committed suicide, investigations and autopsies showed otherwise. After viewing more than 100 photographs of the room where Hangthong was found dead, Scottish forensic expert Adrian Linacre claimed to have discovered inconsistencies with the verdict.

The foreign expert’s opinion that there was sufficient evidence that the victim’s body had been tampered with was the lead story in all Thai newspapers.

A second autopsy was conducted in 2003 by Khunying Pornthip Rojanasunand, then deputy director of the Justice Ministry’s Institute of Forensic Science. The autopsy found that he suffered several bruises caused by a blunt object, before he received a fatal gunshot wound to the back of the head.

The findings were a blow to the police’s Institute of Forensic Medicine’s initial 1999 autopsy, which found no evidence of a struggle or indications of foul play. Meanwhile, the second post mortem examination led to Mr Noppadol being identified as the prime murder suspect. He was arraigned at the Criminal Court and charged with conspiring to murder Hangthong in late 2003. The then prime minister Thaksin Shinawatra demanded an investigation into how police came up with the initial suicide finding.

But Mr Noppadol brought in his own big gun, Henry Lee, a celebrated US forensic scientist who helped the defence in the OJ Simpson trial. After reviewing the evidence, Dr Lee largely agreed with the initial autopsy finding that Hangthong had committed suicide.

A third autopsy was eventually carried out by experts from the Forensic Association of Thailand on the request of Mr Noppadol. They found Hangthong had killed himself, but Mr Noppadol, who was by that time a Mahachon Party executive, was still indicted on murder charges in January 2004.

At a Criminal Court retrial in late 2007, Mr Noppadol was acquitted after it was ruled Dr Pornthip’s testimony was not sufficient to conclude Hangthong had been murdered and had not committed suicide.

Prosecutors appealed the decision, but the Appeals Court upheld his acquittal in 2010.

After the 2010 ruling, two of his sisters — Ms Kanungnit and Naruemol Mangkorn-panich — presented him with a flower garland and asked him forgiveness, saying they had misunderstood him for 11 years.

Hangthong was under intense pressure from rival siblings, who questioned his management of the family fortune and demanded the return of millions of baht that Hangthong had lent to politicians in order to further his political career.

This caused the clan to express doubt that the mystery surrounding the shooting death would ever be cleared up because too many powerful politicians and men in uniform had become involved.

“I and everyone else in the Thammawattana family have some idea about the masterminds of Hangthong’s death, but we don’t have evidence to link the culprits to the crime,” Mr Noppadol was quoted as saying in October 2003 at a committee hearing the circumstances of the death of his elder brother.

Mr Noppadol outlined how more than 50 powerful figures acted like vultures feeding on the Thammawattana conflict.

A fire at parliament house in October 2003 damaged some key evidence in the Hangthong case, including an 80-million-baht loan contract Hangthong established with a fellow politician while he was a Bangkok MP. The papers also contained more than 1,300 pages of documents on Hangthong’s death Mr Noppadol submitted to the panel.

Given the hostility of the family feud that has raged over the years, it appears that the undisclosed settlement last week between the factions of Mr Parinya and Mr Noppadol was as much about a fair deal over the family holdings as ending bad blood.

Mr Parinya agreed to sell shares and businesses to Ms Naruemol, adding the settlement was beyond her expectations. He said Ms Naruemol and Ms Kanungnit will continue to manage the family businesses, marking the end of the 14-year courtroom fight.

“We thank the court for advising us to settle the cases,” Mr Parinya said on Tuesday.

“After our eldest brother Hangthong died, the family was mired in 48 civil and criminal cases including those involving Noppadol. All have been settled today.” 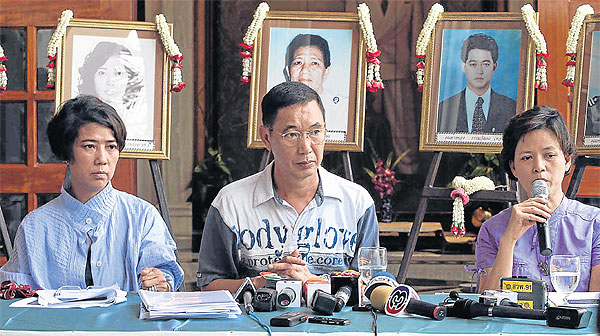 begging forgiveness: Noppadol Thammawattana, centre, with his sisters Naruemol Mangkorn-panich and Kanungnit Thammawattana who had earlier accused him of involvement in their brother’s death. 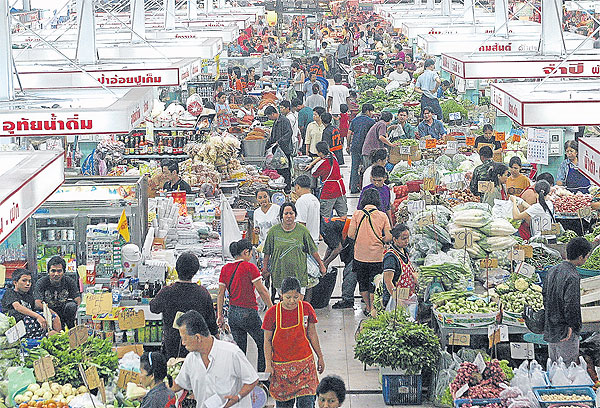 eye of the storm: The Ying Charoen market in Bang Khen, and the fight for control of it, was at the heart of the family fortune and the dispute that led to bloodshed. Photos: Bangkok Post Archive