Banned TV stations back on air, but toned down
Thailand
Special Report

Banned TV stations back on air, but toned down

A deal has been struck to allow networks closed by the military to return, but viewers can expect to see far less political content

Many of the satellite television stations that broadcast political content and were ordered closed when the military took power are set to return, but viewers expecting to see the same type of shows will be disappointed. 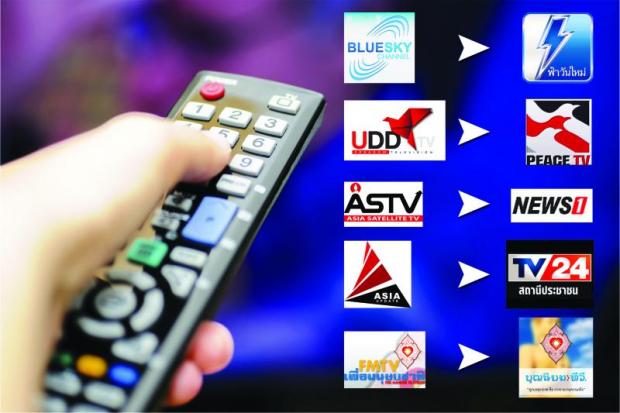 A source at the Office of the National Broadcasting and Telecommunications Commission (NBTC) told Spectrum that a deal has been done to get the stations back on air, but only under certain conditions.

"The NBTC had several meetings with both the NCPO and the channels' executives to discuss the conditions, which requires the channels to comply with NCPO's orders No 97 and 103 or face having their contracts revoked," the source said.

"The channels' executives agreed to that. They came back to us with new programming schedules which we approved and so we signed Memorandums of Understanding [MoUs] with seven satellite channels in late August, plus another one last week [TV24].

"We had been receiving complaints, both from the public and from the NCPO, that some of the channels had gone back to their previous strong content and since then we have issued warnings to them."

Since martial law was put in place on May 20 and the coup two days later, many satellite television stations known for their staunch political support of either of the Pheu Thai or Democrat camp were taken of air. A little more than two months since red-shirt activist Sombat "Nuring" Boonngarm-anong was arrested by authorities and released on bail on the condition he refrain from organising political activities and publicly commenting on politics, he is now ready to return to satellite television.

Satellite television stations had become an alternative media for people across the provinces in Thailand where supporters of the major political camps — the Pheu Thai and the Democrat parties — and are set to resume operations.

The TV24 channel, formerly Asia Update, followed suit shortly after they changed the name of their company in late August.

With limited political platforms and elections a long way off, it remains to be seen if the satellite stations will be able to shape the public agenda, arouse the masses or ultimately change the course of politics, as they did in the past decade. 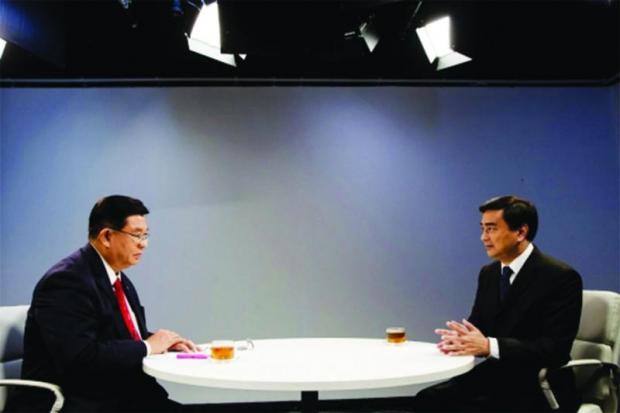 Anti-coup activist Mr Sombat, who was detained shortly after the coup and has agreed with the junta to refrain from organising public political activities, as well as commenting on politics, will host a show called Pra Cha Chon (People) 3.0, a one-man programme where he discusses various topics on his Peace TV station, starting next week.

"My show will come back next week and even though I am under the junta's control and my bank account is still suspended, I am going to do the show and tone it down a little," he said. "I will have to be more careful when I deliver my comments."

Mr Sombat said Peace TV will be operated by the United Front for Democracy (UDD) chairman Jatuporn Prompan. The source of the funding is undisclosed.

He also revealed he had been approached by another satellite TV station, which sees him as a popular public figure, to take part in a debating programme with figures including Jaruspong "Sumo Too" Surasawadi and Sopon Onkgara, who are known for their anti-Thaksin stances, and he has agreed.

The plan was later called off because of fears the show could turn into a heated debate about politics, rather than a constructive discussion by people with different political views.

Adisorn Piangket, the former director of Asia Update and who now runs TV24 which was officially launched on Sept 4, says the channel will maintain Asia Update's identity, with pretty much the same hosts, but not the UDD's core leaders.

"When we signed the MoU, we were asked to deliver content that is suitable to the current situation. Our team is still the same team as Asia Update. However, Ms Tida, Mr Nattawut and Mr Jatuporn will have their own channel."

The UDD core leaders, Tida Tawornseth, Nattawut Saikuar and Jatuporn Prompan, scrutinised the amnesty bill which was voted on by the parliament in November on Asia Update and the channel was known to be hugely popular with red-shirt sympathisers across the country. Mr Adisorn told Spectrum that the new channel, TV24, will also be supported by the same people. 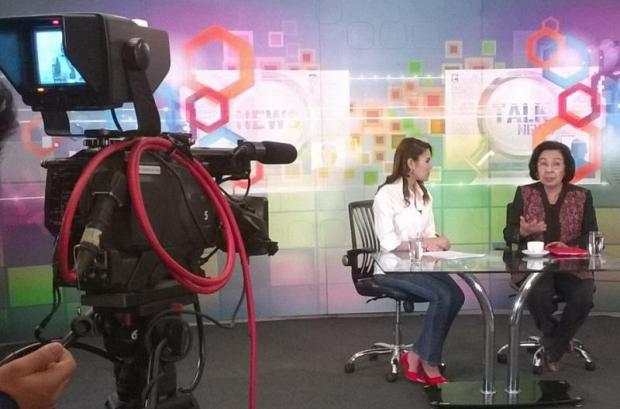 keeping the peace: Tida Tawornseth, right, made her return broadcasting on the renamed Peace TV on Sept 1.

BUSINESS AS USUAL FOR THE BLUE

The suspension of satellite television in May left many executives with big financial problems due to a lack of revenue, gained mainly through on-air advertising.

Takoeng Somsap, a Blue Sky executive, posted on his Facebook page in late July that without its quick return to air, Blue Sky Channel Co will go bankrupt as more than 100 employees lived off his savings since the channel was shut down on May 21.

As of Sept 9, a show on the Fah Wan Mai channel called Must Ask welcomed Democrat Party leader Abhisit Vejjajiva as a guest, and the host was Jermsak Pinthong, a former ASTV programme host.

Democrat spokesman Chavanond Intarakomalyasut will also host a cooking and lifestyle show on Fah Wan Mai. He previously hosted a show with other Democrat MPs Sirichok Sopha and Thepthai Senpong on Blue Sky. Together, they were notorious for their use of strong language in their political comments. However, they will no longer host the show on the new channel.

"As of now, Fah Wan Mai is unable to deliver strong political content like it used to when it was Blue Sky. However, we will still push the issue of reform on the channel.

"The news programme will still be there to deliver facts to the audience, which we hope they will benefit from," Mr Chavanond told Spectrum in a phone interview.

A year after it was launched in late 2011, Blue Sky reported that 60% of its revenue came from advertising, 10% from SMS correspondence and 15% from other activities. Products sold through marketing channel Blue Sky Direct brought in another 10% and the rest was revenue from other sources.

Its 24/7 live broadcast of the People's Democratic Reform Committee's protests during 2013-14 caused its ratings to skyrocket, until it was taken off air in late May as martial law was put in place.

Throughout the last week of August, executives of various satellite stations were trying to come to terms with the junta's regulations in order to get business, terribly affected by the three-month absence, back on track.

Committees from the NBTC met with the NCPO to draft broadcast regulations for the media in the post-coup period. Priorities included not instigating political conflicts in line with the NCPO's policy of dissolving colour-coded politics.

At the end of August, eight satellite TV stations signed junta-approved MoUs with the NBTC with regulations including programming content revision and abstaining from political criticism.

Their former contracts, registered under their previous names, were cancelled and cannot be re-registered. Their new contracts under their new names last for one year.

Four channels have not signed the MoUs with the NBTC. They are Hot TV, Rescue TV and The Network of Students and People for Thailand's Reform.

Satellite TV contracts are easier to obtain than digital TV contracts that must be obtained through state concessions. As stipulated by the NBTC, satellite airplay content must include no less than 25% news and public-awareness programmes and 75% for entertainment. Advertising must not exceed five minutes per hour per day.

The satellite TV operation regulation is that 2% of revenue must be forwarded to the NBTC. If any station's revenue is more than five million baht per annum, 4% of the revenue will be shared with the NBTC.

However, some have refused to sign the MoU with the NBTC. Among them are former People's Alliance for Democracy leader Sondhi Limthongkul and the satellite TV personality Leena Jung, who claims the junta's shutdown of her Hot TV station has cost her 25 million baht.

"Since the martial law announcement on May 20, my station has been off air and I lost all my investment, 25 million baht in total, that I put into it since 2011 when the station was launched," Ms Leena said.

"The junta made eight TV stations sign MoUs with the NBTC, on similar conditions with those being locked up in the army camps right after the coup so that they cannot organise political activities. For TV stations, academics and members of independent committees cannot appear on the channel. No criticism can be made of the junta and the cabinet.

"Even though Article 4 in the interim charter guarantees freedom of expression, the media is unable to perform its function properly because of this MoU. I did not feel I needed to sign it. I don't need to be taken advantage of."

Ms Leena, who has since launched an online streaming outlet for her programme, mixing heavy critiques of the junta with selling her cosmetics, has received rave reviews from those longing for strong airplay content.

Ms Leena says she is thinking of registering with overseas satellite operators, however, her online streaming on YouTube is popular with her fans.

WHAT DOES THE FUTURE HOLD?

In the post-coup era, commentators predict the heyday of satellite television may not return. Mr Sombat says the cause and effect, which satellite TV was founded upon, has gone since the coup.

"Satellite television was founded to arouse the masses for political cause. With several limitations imposed at the moment, there is no way that it will go back to what it once was, that is, a political tool," he said.

"The role of satellite television will be reduced greatly from now on. It is going to be a public space to reach out to the people, but it will not be mainstream media. In the future, the heavy use of the media will move to social networks with the rise of smartphones and communication applications instead."

"I don't think satellite television will be as influential as before," he said.

"With digital television as a new player, combined with the military's media control which prevents them delivering unique content, they are not going to be able to maintain their previous roles and status." n