As the military regime looks to elevate the role ofvolunteer groups in the South, critics say a lack ofproper training will doom the scheme to failure 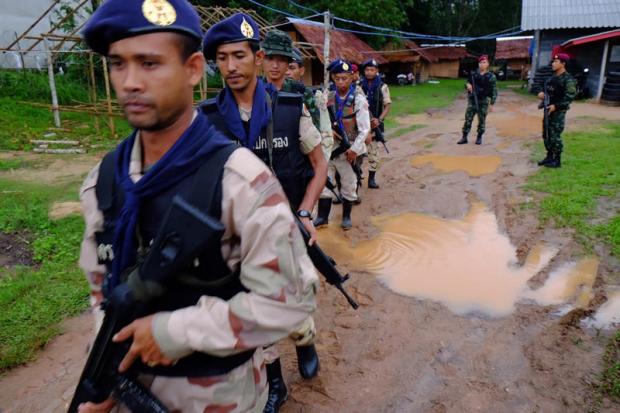 Forward march: The Volunteer Defence Corps (Or Sor), with navy blue scarves, have now been deployed to a Tambon Protection Unit which will be chaperoned by commissioned military officers. (Photo by Thiti Meetime)

"I just got the gun yesterday," said one of the volunteers, in his mid-twenties, smiling as he looked at his World War II-era rifle which is used in Thailand mostly as a ceremonial training weapon for high school students. "They say it will be replaced by a newer one soon."

Above the group was a bright red, newly-installed warning siren. A demonstration was given on how to activate the alarm, but after a few seconds no one was able to find a remote control to switch off the ear-splitting sound.

The defence volunteer nervously pulled down the electrical breaker inside the room, and cut off power to the whole premises, including the noisy siren.

The alarm, part of a new security alert system installed at Ban Paku primary school in the wake of the arson attack, has done little to allay the fears of those working there. Authorities say it is part of a new "model" of security that will form the basis for a revised strategy in the deep South.

"At least they are trying to do something. The night shift is organised from midnight to six o'clock now," said a female Muslim teacher, referring to a 24-hour school surveillance network put in place following the predawn attack on Oct 12.

The Ban Paku attack was one of five carried out simultaneously on schools in Thung Yang Daeng district, while another school in nearby Ma Yo district was also burned down on the same night.

The 4th Army Region was quick to turn the crisis into opportunity. It has rebranded the strengthened village "surveillance" network the "Thung Yang Daeng model" as it looks to strengthen existing local militias.

Lt Gen Prakarn Chonlayut, the 4th Army Region commander and four-year veteran of the deep South conflict, said, "Villagers are the ones who know best about the localities, and their systematic support should help >>
>> scare away the infiltrators so that the military can focus on confidence-building missions and raid-surge operations."

Maj Gen Viwat Patompark, deputy 4th Army commander, said the gist of the Thung Yang Daeng model was to use non-military personnel to guard soft targets such as teachers.

He said the military has reset the operational command lines for these local militias in an effort to streamline them, and the plan would enable the gradual withdrawal of professional troops.

More than 6,000 people have been killed in the past decade of the southern conflict, which covers the Malay-Muslim dominated border provinces of Yala, Pattani and Narathiwat, as well as four districts of Songkhla. 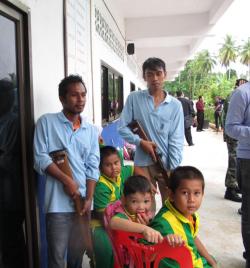 Out-gunned: Village defence volunteers with the old M1 carbine rifles that were handed to them recently. The same model rifles were used in World War II.

Early this month Defence Minister Prawit Wongsuwan — a former national army chief — said the government would "try to bring peace within a year" to the region.

Prime Minister Prayut Chan-o-cha, meanwhile, is also scheduled to make an introductory visit to Malaysia early next month. There, the southern insurgency and the pending resumption of peace talks with several separatist groups are likely to dominate the agenda.

Residents in the southernmost provinces, who had lived under emergency laws for years even before martial law was declared nationwide on May 20, mostly resent the presence of about 60,000 troops and paramilitary forces.

The 4th Army Region expects that enlarging the non-military presence could make the  gradual pullback of soldiers from other regions possible in the years to come.

"If we can build trust among the people, if we can mobilise more villages to become 'self-development and self-defence villages', and if we can bring more of those against the Thai state back home and reach out to various civic groups, I think a more peaceful situation could be seen soon," Lt Gen Prakarn said.

The model echoes a similar strategy employed to battle the perceived threat of communism in the 1970s and '80s, where self-defence, or Or Phor Por, villages were set up to fight on behalf of the state.

Today, the structure of militias operating in the deep South is complex, comprising multiple groups which sometimes overlap and have seemingly limited oversight.

But the military's new push seeks to reinvigorate these militias, enhance their defensive capabilities and bring them under more effective central command.

The three main militia groups operating in the South are the Or Sor, Chor Ror Bor and Or Ror Bor.

The Or Sor is notable for its higher level of training and better equipment; it is, in essence, a semi-professional fighting force, which falls under Interior Ministry supervision.

Chor Ror Bor, or Village Development and Self Defence Volunteers, are the main government-supported militias operating in the region, and are also answerable to the Interior Ministry. They comprise a mix of Muslims and Buddhists, but are poorly trained and equipped.

The Or Ror Bor, or Village Protection Volunteers, are notable for comprising almost entirely Buddhists and come under the Royal Aide de Camp Department, a unit of the Defence Ministry responsible for the protection of the royal family.

A source said under the military's plan, new district-level units will be formed using members of the existing militias. "These newly-established units will comprise of some 30-40 Or Sor and 10-15 Chor Ror Bor, and will be guided mostly by between two and four officers, mostly sergeants," the source said.

Critics are not convinced the new plan to hand more responsibility to these militias will work, especially as some 2,700 Heckler & Koch HK33 assault rifles were distributed to Or Sor units, saying it will only thicken the atmosphere of distrust.

The Or Sor units' old weapons will be handed down to Chor Ror Bor and Or Ror Bor militiamen, who have until now been equipped with only a small arsenal of shotguns.

Mr Aathif said the military has made either belated or false moves in response to the fast tactical changes of the Barisan Revolusi Nasional — the most prominent of several separatist groups in the South. Instead of unifying locals, he said, transforming the villagers into militia groups has actually driven more wedges and created more mistrust among local people.

"The insurgents have changed their tactics by no longer laying siege to villages, but instead carry out attacks along the roads their targets take or pass.

"The villages where they stay are not the villages they attack," said the Narathiwat-born activist, adding that this tactical shift renders the armed militia groups mostly redundant.

Those who command individual Chor Ror Bor groups — usually sub-district chiefs and village headmen — are also concerned about taking on more arduous and dangerous work without extra incentives. Nisoh Nikaji, a Koh Chan sub-district chief in Ma Yo district, pleaded for proper financial and technical support, stating the Chor Ror Bor members were increasingly stressed due to the greater physical risks and mental loads being asked of them.

Tuan Yakoh, deputy headman of a village in Ma Yo whose school was torched last month, said he was still unclear about how to administer the new surveillance system being put in place by the military.

"It may be a bit early to dub the operations here as a 'model' for elsewhere, as we are not quite certain of what to do and what we can achieve," Mr Tuan said on the sidelines of a meeting last week with district and village chiefs in Pattani's Ma Yo district.

Phaosan Suerie, 23, a student from Yala whose home was not far from one of the schools in Thung Yang Daeng attacked last month, said most villagers were not aware of the tightened security measures or the meaning of the "Thung Yang Daeng model".

"Chor Ror Bor are not supermen, so the repolished image does not make the local residents feel more safe or excited," said Mr Phaosan, whose brother and brother-in-law were victims of the violence.

Some colonels conceded that effectiveness in dealing with security incidents still rests mostly with the military, paramilitary rangers and Or Sor personnel.

Security is not the only concern with the new plan. Re-envigorating Or Sor and Chor Ror Bor groups in terms of numbers and weaponry has become a loophole for cronyism and bribery as local officials, religious leaders, soldiers and local politicians push for their own siblings and relatives to enter the system and receive government handouts.

"It's quite a business here. You can see some people wearing both Or Ror Bor and Chor Ror Bor hats," said a 53-year-old Or Sor stationed in Songkhla province.

Most Or Ror Bor members are paid 4,500 baht per month, a standard salary the government gives to the selected locals to undertake different types of security-related jobs including intelligence and surveillance.

Sources said the numbers of Or Ror Bor personnel was 5,530 across the four provinces. The members are almost all from Buddhist villages that are sandwiched among Muslim communities, designed to encourage Buddhists to stay in the South rather than flee the violence.

"I'm not that concerned with the Or Ror Bor as they are usually well-trained and have a good relationship with us and the military. But the problem is with the poorly-trained Chor Ror Bor programme, which is expanding to fill up all 1,988 villages," said an Or Sor member from Saba Yoi district in Songkhla.

Each village has 30 Chor Ror Bor members who share a 20,000 baht monthly allowance provided by the government. They are also given 15 shotguns between them, with five shells each, although this arsenal will now grow as Or Sor units pass down their old guns.

Since Chor Ror Bor members are not paid on a monthly basis like the Or Sor, their complaints are now growing louder as they are expected to take on a greater role in the counter-insurgency.

The Or Sor, whose monthly wage, including various allowances and bonuses, is 13-14,000 baht, have a more formal recruiting and training process.

But the rush to fill Or Sor ranks at the tambon level has meant new recruits are now only attending 15-day training courses run by local junior military officers.

"I have heard some people in Kok Pho district [of Pattani] have paid 50-60,000 baht to apply for an Or Sor position," one source said.

While saying Or Sor were the real guards of peace for the deep South, the Saba Yoi native conceded that mandatory monthly medical checks for Or Sor members routinely turned up evidence of drug use, leading to frequent dismissals.

Or Sor sources said they had a mixed arsenal of modern and antique weaponry, including modified M16s, AK-102s, HK33s and M79s.

"These weapons are kept at tambon-level joint village defence units," a source said. 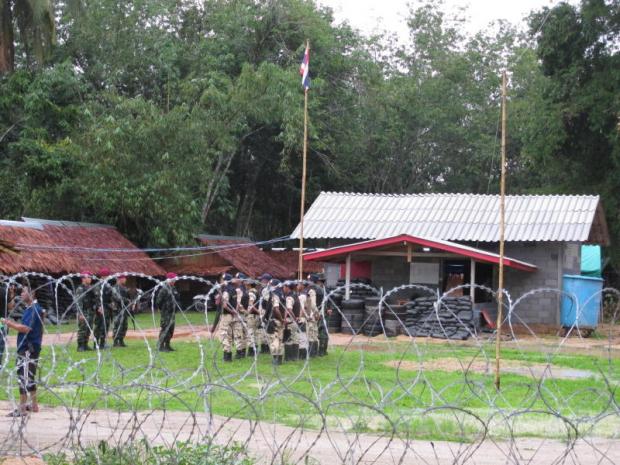 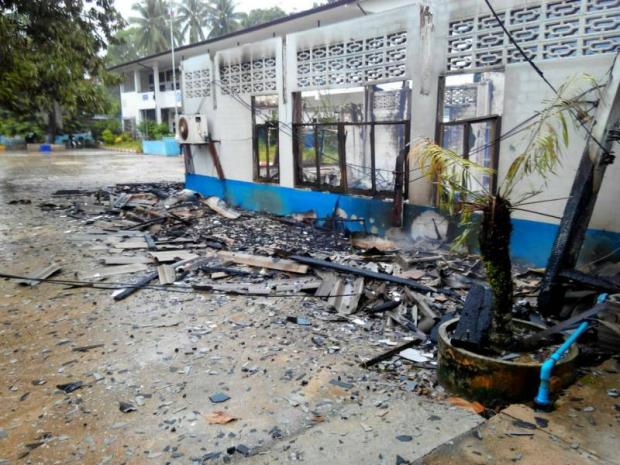 target: The aftermath of a school being torched by militants in the deep South. Authorities are hoping beefed up local militias will curb the violence. 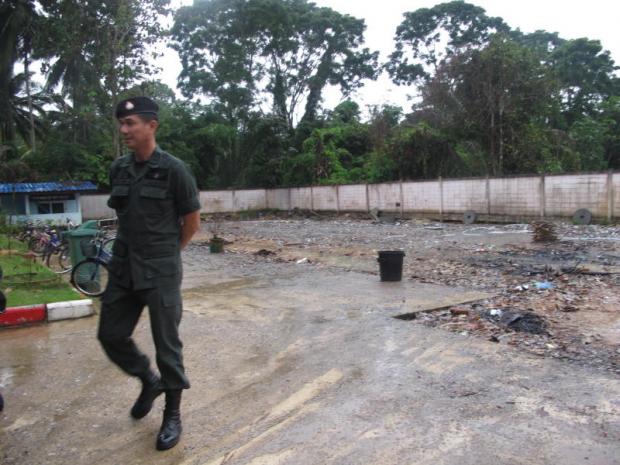 attacked: Little remains of a building at Ban Paku school that was torched at dawn on Oct 12. 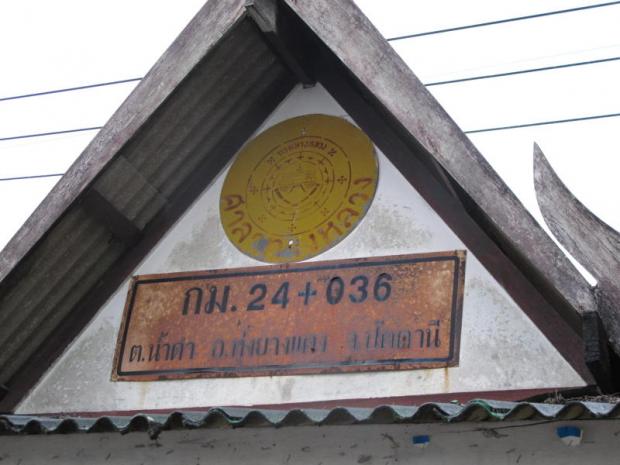 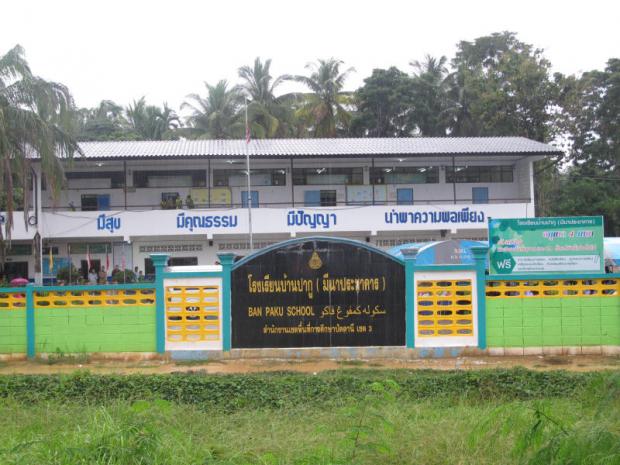 double trouble: This school in Thung Yang Daeng district was torched twice, the first time nearly eight years ago and the second time a month ago.