A man drinks beer from a tower as his friends look on at a local open-air beer bar in downtown Ho Chi Minh City. At as little as 10 baht a glass, Vietnam has long been one of the cheapest places in the world to buy a beer and, recently, alcohol consumption has been rising quickly. (AFP photo)

A scantily-clad deejay gyrates to ear-splitting music as the crowd of drinkers order more towers of lager: Welcome to The Hangover, one of a new crop of “beer clubs” raising concerns about Vietnam's drinking culture.

At as little as 10 baht a glass, Vietnam has long been one of the cheapest places in the world to buy a beer and, over the last few years, alcohol consumption has been rising at one of the fastest rates anywhere.

Vietnamese used to mainly enjoy their booze perched on the small plastic chairs that festoon curbside beer joints. But increasing wealth has brought new drinking options to a country which has no real notion of alcoholism and no specific word for a hangover.

Bars are still mainly the preserve of well-heeled expatriates and the Vietnamese elite, so beer clubs - with their music and air-conditioning - have sprung up over recent months as funkier alternative for young, local drinkers, many of them committed to the cause. 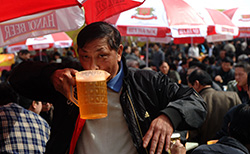 "The purpose of drinking is to get drunk. It will be a waste if you are not drunk," 21-year-old Vo Van Bao told AFP outside The Hangover, where he had come on a recent Thursday evening with friends.

Despite the well-used "vomit sink" in the bathroom, The Hangover's owner, who declined to give his name, told AFP he was aiming to create a family-friendly establishment.

Vietnam is the third-largest beer consumer in Asia, behind Japan and China, and the leading consumer in Southeast Asia, out-drinking even wealthier Thailand, according to industry figures.

The rate of beer drinking in Vietnam has increased by more than 200% over the past 10 years, state media recently reported, due in part to rising levels of disposable incomes and demographics. A million people reach the legal drinking age of 18 each year.

For now Vietnam barely makes it into the world's top 100 per capita alcohol consumers, according to World Health Organization statistics, far behind big-drinking Russia, Britain and France. But the statistics are skewed because fewer than 2% of Vietnamese women drink alcohol at all, according to WHO technical officer Phuong Nam Nguyen.

That leaves it to the men, one quarter of whom drink at "harmful" levels - defined as six or more drinks per session - WHO research indicates. 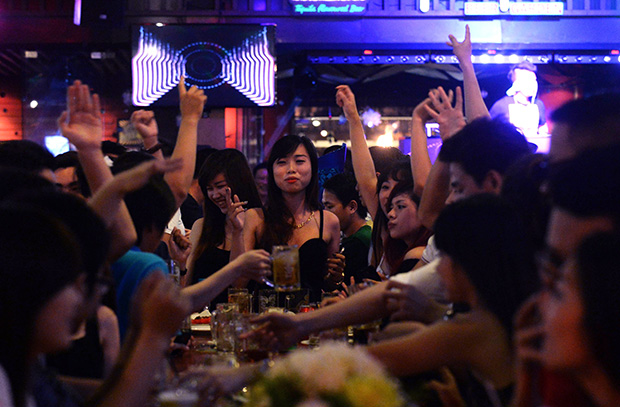 About 60% of domestic-violence incidents in Vietnam are linked to alcohol, government research shows, and excessive alcohol consumption is resulting in rising incidents of non-communicable diseases like cancer and diabetes.

Efforts to restrict consumption - from a proposed 10pm alcohol-sales ban to plans to limit beer sales to air-conditioned venues - have been widely mocked in the state-run press and rapidly abandoned. Vietnamese men toast with rice wine during a party at a restaurant in in Hanoi. (AFP photo)

It is all part of Vietnam's robust drinking culture - one local saying declares "a man without alcohol is like a flag without wind".

"This (idea) is deeply rooted in our culture and will take a long time to change," said WHO's Mr Phuong.

The market is dominated by three companies and every major town has its own brew - from Beer Saigon in southern Ho Chi Minh City, to Beer La Rue in the central areas, to Hanoi beer in the northern capital.

International drinks giants are hoping to persuade Vietnam's beer drinkers to move onto harder liquors, despite heavy taxes and a ban on advertising spirits.

With a population of some 90 million, half of whom are under 30, and a rapidly expanding middle class, Vietnam is a key market for companies such as Diageo, which produces Johnny Walker whiskey, among many other brands.

The company says consumption is not actually that high, with Vietnamese drinking less than the French per capita, but it remains an enticing business prospect.

"There is a fake perception that Vietnam is drinking too much, it isn't true," said Stephane Gripon, general manager for Diageo in Vietnam. "They drink in a reasonable way and their consumption of spirits is... still very low."

That is not always the case for Vietnam's beer boys. 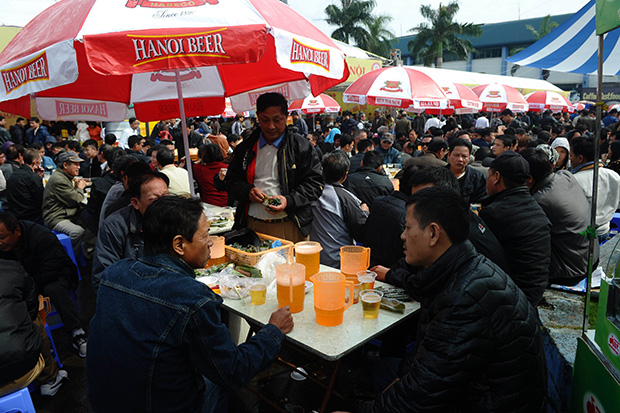 On a recent Wednesday lunchtime in Hanoi, Nguyen Van Thanh a 42-year-old construction engineer, sat with a friend drinking at a bia hoi - a roadside restaurant serving freshly brewed beer. Around 10 empty beer bottles were on the table.

"I drink every day, beer or spirits. I know it is not good for my health, but it's hard to give up this habit," he told AFP.

"Sometimes, I can do business only if we've drunk together. It's also hard to say no when you're invited to drink - we say 'no alcohol, no party'."