Yodpiman Group has spent 1.5 billion baht to renovate the market area, with 600-700 million going to the Yodpiman Riverwalk.

Southeast Asian fresh markets have always enchanted foreigners drawn to their indigenous charm and down-to-earth characteristics seen nowhere else in the world.

From the small morning market in Luang Prabang where sellers sit on damp pavement, to fresh markets in Hanoi where goods are placed on the backs of bicycles, each has its own individual character that reflects the originality of Asian cultures.

In Bangkok, the area known as Pak Khlong Talat — the world's fourth largest flower market by transaction frequency and the biggest flower market in Thailand — is a local treasure. But today its traditional atmosphere is being threatened, many vendors and visitors feel, by the emergence of a riverside community mall.

The plans for the mall gave rise to strong resistance because local residents were not certain about the developer's intentions. Entrepreneurs feared for their futures as they heard their stall rental rates might double.

Local sellers already faced problems because of the activities of sub-lessors. As more parties get involved in leasing and sub-leasing space, rents rise every time the tenants change. It's a phenomenon seen in many large markets, including Chatuchak.

Chaleo Preekran, the president of Yodpiman Market Co Ltd, the owner of Yodpiman Riverwalk, acknowledged that his company's development had caused some ripples.

"For local residents who have been living here for half a century, it takes some time for them to cope with the change," he said.

It took more than a year to settle negotiations with all stakeholders and settle rental rates that were acceptable for everyone, he said. However, he said he was confident that today almost everyone in the community favours the development.

"The identity of Pak Khlong Talat as a flower market is the selling point of this shopping project. We've kept the identity of the area, while adding an alternative for visitors who come to see the flower market," Mr Chaleo told Asia Focus.

"Tourists don't come here for the fresh produce. They come here to feel the local lifestyle and sense the ambiance of the fresh market. So we help organise the atmosphere and try our best to provide convenience and cleanliness."

Located on the edge of Rattanakosin Island, the historic centre of inner Bangkok, Pak Khlong Talat dates back to the reign of King Rama I (1782-1809) and has been cited as a "place of symbolic value" to Bangkok residents.

The area consists of three main markets renowned for high-quality flowers and vegetables, including the five-rai Pak Khlong market which belongs to the Market Organisation under the Interior Ministry; the nine-rai Yodpiman market and the four-rai Song Serm Kaset Thai market. The latter two belong to private operators.

The markets operate 24 hours a day, and are often at their busiest from midnight until dawn as business owners arrive to purchase fresh goods for the day ahead. 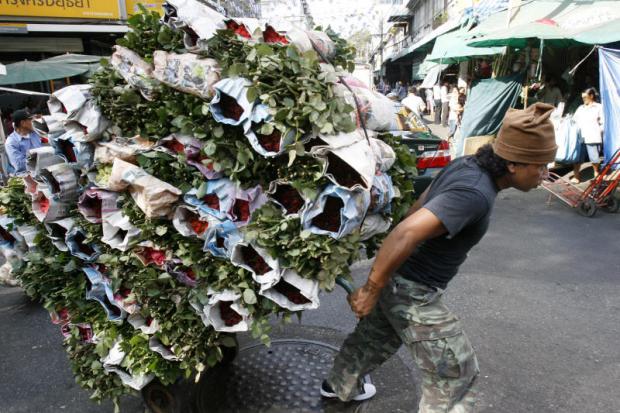 A worker wheels a trolley full of bunches of roses at Pak Klong Talad, Bangkok's largest fresh flower market, ahead of Valentine's Day.

Yodpiman Group purchased the Yodpiman flower market in 2010, then obtained a 30-year concession to operate the Pak Khlong market. The company has spent 1.5 billion baht to renovate the area, with about 600-700 million going to the Yodpiman Riverwalk. The rest has gone into renovating existing buildings and constructing a 350-car parking lot.

The Yodpiman Group is the sole investor in the venture but will share management with the Market Organisation. Its renovation plan won approval from the Rattanakosin Island Conservation and Development Committee, and work began in 2011.

The committee is in charge of overseeing development along the riverbank. Developers are obliged to conserve buildings with historical and architectural significance, to remove or demolish non-important buildings, to develop their land for tourism areas and open spaces, and to adopt and promote activities that will support conservation and tourism.

Yodpiman Riverwalk is designed as a colonial-style building facing the Chao Phraya River, and has 6,000 square metres of retail space for rent. There are six connected buildings with 40 retail shops and restaurants. The 300-metre-long complex sits atop an old vegetable storage warehouse that had fallen into disuse.

"This kind of development definitely looks better than the old, dark and dangerous warehouse which blocks the access to the river," said Niramon Kulsrisombat, an assistant professor in the department of urban and regional planning at Chulalongkorn University and the director of the Urban Design and Development Center (UDDC).

"I believe in creating life in an area. This kind of development generates movement and activity and, according to our survey, people usually pass through an area that has more activities."

Movement studies conducted six years ago showed that people seldom passed through the area where the Yodpiman mall is located today. Only workers with vegetable carts used the old warehouse after midnight.

"I tend to agree with development projects along the river because they are good initiatives to rehabilitate old areas and provide public access to the riverbank," Ms Niramon said. 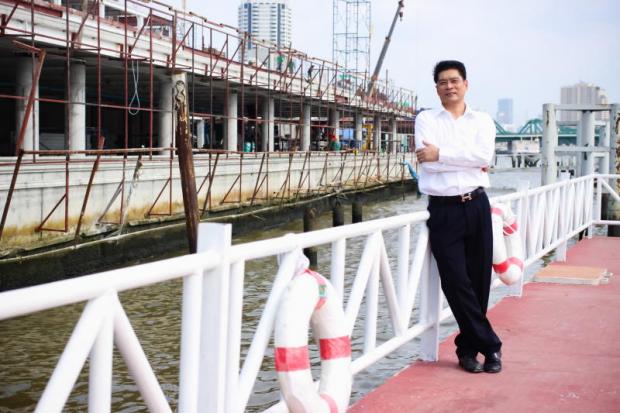 "We've kept the identity of the area, while adding an alternative for visitors who come to see the flower market," says Chaleo Preekran, the president of Yodpiman Market. For example, the elevated walkway lets tourists observe the community.

"The riverside area in Bangkok is barely accessible. If there are any areas with potential, they should be developed right away."

She added that along the 24 kilometres from the Krung Thon Buri Bridge to the Krungthep Bridge along the river, only 3.5 kilometres can be accessed by the public.

Bangkok's population will increase dramatically from 9 million today to 20 million in the next 20 years. The trend is toward endless expansion to the suburbs, but urban redevelopment and rehabilitation of existing spaces is essential.

"Bangkok has a low population density, but it's overcrowded because the utilisation of city space is not efficient," Ms Niramon told Asia Focus.

"Though most development projects along the river are created for commercial purposes with semi-public spaces, if they provide reasonable proportions of open space, connect the land and the river, and have concern for historical conservation, they can be considered good projects."

Architecturally, she believes Yodpiman could have done a better job of connecting with its surroundings. It should provide more openings that connect the land directly to the river.

"There should be an added proportion that helps to conserve the historical value of this area, such as an information centre or learning space, because both sides of the river contain precious historical property. So there should be something to represent and communicate that story," she said.

With the development taking place, traffic congestion has risen accordingly. Apart from the riverfront, Yodpiman can only be accessed through narrow and untidy alleys full of vegetable stalls.

Mr Chaleo laments that the various parties — businesses, the Bangkok Metropolitan Administration (BMA) and the municipal police — have yet to agree on a proper traffic management plan.

Wanchai Thanomsak, director of city planning under the BMA, says the agency is collaborating with the Market Organisation and the Crown Property Bureau on a feasibility study to renovate the Rattanakosin landscape including Pak Khlong Talat. There hasn't been much collaboration with business, so further talks are needed, he admitted.

The Chao Phraya River in recent years has lured some major developments, such as the Asiatique retail complex, and the IconSiam mega-mall and high-end residences scheduled to open in 2017.

However, "we don't see them as competitors because more projects will encourage river transport, while people will have more access to the river", Mr Chaleo told Asia Focus. "And we have the selling point that is more than a simple shopping mall, because we have the view."

Yodpiman is surrounded by many important landmarks such as the Memorial Bridge, the 100-year-old Krung Thon Buri City Hall, and Wat Prayurawongsawas which has received an excellence award for cultural heritage conservation from Unesco.

"Yodpiman will be the hub of eco-tourism activities in the area as tourists can board the boat here and travel to an extensive network of canals on the opposite Krung Thon Buri side," he said. The company also plans to serve as an interchange between the Sanamchai MRT underground station which is under construction and the Pak Khlong Talat pier.

While critics might bemoan the inclusion of international brands such as KFC and Starbucks, Mr Chaleo said that a modest presence of familiar names helps assure foreign tourists that the site meets global standards.

A group of French tourists told Asia Focus that they found Yodpiman welcoming, clean and modern, and an attractive gateway to the famous traditional flower market.

A man accused of shooting dead his ex-wife and wounding another woman at a cosmetic clinic in Bangkok on Tuesday has been arrested in Phetchaburi.

YOKOHAMA: Relieved passengers began leaving a coronavirus-wracked cruise ship in Japan on Wednesday after testing negative for the disease that has now claimed more than 2,000 lives in China.