Out of the old, into the new
Thailand
Special Report

Out of the old, into the new 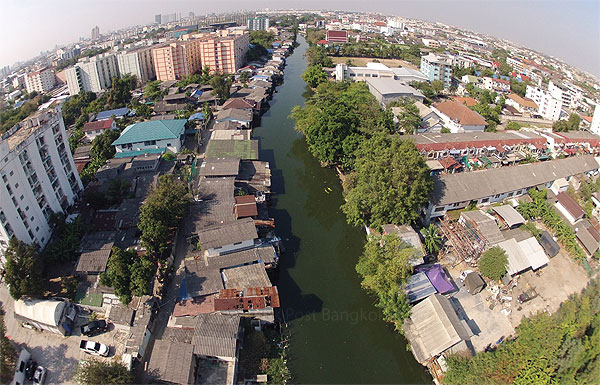 More than 3,000 houses have encroached onto Khlong Lat Phrao. Over the next four years, the residents will be gradually shifted to new housing nearby, allowing authorities a better chance to tackle flood problems. (Photo by Pattarapong Chatpattarasill)

The relocation was a pilot scheme in a long-term project that will eventually see many more families removed from other areas along Khlong Lat Phrao and other canals in the capital.

It has given those affected the chance of a better quality of life and will allow for better handling of floods that plague the capital, he said.

Providing new space that is close to their old home was the main factor for the success, Mr Kangwan added.

Residents in the Bang Bua community, who encroached along Khlong Lat Phrao, were relocated to a new area nearby with the help of authorities under the “Solid House Residence” scheme, or the Ban Man Kong project), which is aimed at eradicating slums in the city.

City Hall worked with the Ministry of Social Development and Human Security to help the residents, Mr Kangwan said, adding the ministry provided affordable housing for the local people.

The advantage of the government’s housing project was that the new location was close to the old one, allowing residents to stay close to their friends and their workplace, Thawil Jantham, a member of Bang Bua community said.

Quality of life is better because people have new homes, he said. The design and elements of the new houses make for much better living standards, and are easier to keep clean.

The effort to relocate people encroaching on waterays in the city is part of the Bangkok Metropolitan Administration’s solution to chronic flooding. The illegal properties contribute to the blocking of waterways, especially in the principal distribution canals.

He said a budget of 2.4 billion baht was set aside by Prime Minister Prayut Chan-o-cha’s government to tackle the problem of encroaching houses along 40 kilometres of Khlong Lat Phrao and the construction of floodgates. The project will take about four years to complete.

The floodgates will prevent water from overflowing into city areas when rainfall is high, Mr Kangwan said. The gates are about 38 metres wide, which means all encroaching structures have to be removed.

City Hall, Mr Kangwan said, does not have the right to demolish the houses since the land along the canal belongs to the Treasury Department.

The Bang Bua community has been a part of the “Solid House Residence” (Baan Munkong) project since 2003, said Krit Kiatpanachart, head of Bang Ken District Office.

Residents banded together to draft a letter to City Hall, asking it to inspect the area where they were living. A savings cooperative was then set up by residents and it requested a loan from the Community Organisations Development Institute at a low interest rate to build new housing within the vicinity of their old residences.

The locals signed an agreement with the Ministry of Finance to rent the ministry’s land next to their old community for their new houses, Mr Krit said.

Each resident whose house encroached on Khlong Lat Phrao was eligible for a loan of 150,000 baht, he added. They are required to repay the loan in monthly installments, while they also benefit from free rent of the land for their new homes.

At first, the Ban Man Kong project was opposed by residents because of a lack of faith in the scheme, Tui Ploykhaow, who represents the Bang Bua community said. Their objections resulted from the double monthly payments, one for the loan and the other for the land lease fee.

“They are burdened with debt,” said Ms Tui. Some residents questioned whether the land the residents rented was allocated equally for each person.

A team of volunteers gave detailed information about the project to the residents and it received a positive response from them, she said.

Some 264 families in the Bang Bua community participated in the housing project. The residents were also told that their encroaching homes were illegal and they therefore had to be relocated.

In their new residential compound, there is outdoor space for children to play after school. It also serves as a new social gathering spot for residents, Mr Thawil said.

“Children can hang out there after school, do homework and play games,” he said. The communal atmosphere can help reduce crime and drug-related problems. Parents benefit from good and happy children, he added.

Somphong Nathong, 76, who runs a grocery store in the Bang Bua community, said he invested more than 300,000 baht in his new house. But it was all worthwhile. The cost was much cheaper than housing in other areas of the city, he said.

Wilai Ruangma, who heads the nearby Ruan Mai Pattana community, said only 10% of 163 families in her community had joined the “Solid House Residence” project, even though she has worked hard to promote the project over the past 10 years.

“Most residents do not want to fall into debt even though they are aware they are occupying space illegally,” she said.

The Joint Standing Committee on Commerce, Industry and Banking urges the government to speed up its decision on adopting a Covid-19 vaccine passport scheme.

Prime Minister Prayut Chan-o-cha is urging parties who are disputing cancellation of the bidding for the MRT's Orange Line western extension to come together for talks.

Chiang Mai was ranked as the third most air-polluted city in the world on Wednesday, with an average PM2.5 dust level higher than 200.