Wake up to quality shut-eye

Sleeping disorders can lead to much more serious complications

Sleep disorders are a universal problem. In Thailand, up to 40% of the population are reported to have suffered insomnia at some point, according to the Department of Mental Health. The US Centres for Disease Control and Prevention (CDC) considers insufficient sleep a public epidemic with an estimate of 50-70 million American adults falling victim to sleep, or wakefulness, disorder. 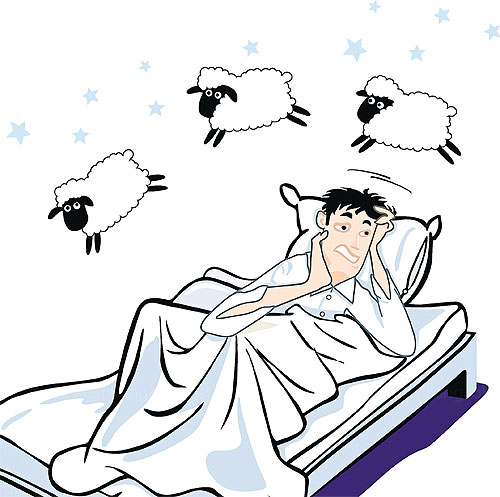 People normally spend an average six to eight hours a day sleeping. This means one third of our time is spent in slumberland. However, neurologist Dr Sarinporn Manitsirikul said it can be a serious issue if a person fails to have quality sleep.

"Quality sleep helps organise and store what you have learned and experienced during the day. It helps with the balance of neurotransmitters. Good sleep also enhances concentration and improves the mood. Bad sleep, therefore, affects not just physical health but also emotional and occupational health," explained Dr Sarinporn, as part of a seminar entitled "Sleep Disorder: Seeing Through Sleep-related Difficulty" organised late last month by Bangkok Hospital.

The specialist's observation is in line with one of the studies conducted in 2005 by the US National Health and Nutrition Examination Survey. At that time, a sleep disorders questionnaire was sent out to participants aged 16 and above. Around 23% of respondents said their sleep-related difficulties affected their concentration. Some 18% said insufficient sleep led to them having trouble remembering things while 8% reported that bad sleep affected their ability at work.

Neurologist Dr Jakrin Loplumlert added that three major issues are responsible for the quality of sleep: duration of sleep, disturbing factors such as snoring, and sleep-wake time.

"Duration of sleep should not be too short or too long. There should be nothing to disrupt the sleep. And people should not stay up or wake up too late. All this determines if the time you spend in bed is quality sleep," Dr Jakrin noted.

A sleep-related problem does not just mean insufficient shut-eye. Sleep disorders cover a spectrum of symptoms — from sleep deprivation, sleep fragmentation, inappropriate sleep-wake time, narcolepsy (a neurological disorder that affects the control of sleep and wakefulness) and idiopathic hypersomnia (excessive daytime sleepiness) — each of which has its own causes and risk factors.

Sleep deprivation, for example, can be caused by too much sleep the previous night, too much napping during the day, stress and anxiety before going to bed, obstructive sleep apnoea, restless leg syndrome or even poor sleep habits and an unhealthy bedroom environment. Snoring, on the other hand, is caused by physical factors such as obesity or abnormal facial structure.

Finding out the real culprit for sleeping difficulty is consequently paramount. And this, Dr Jakrin said, can first be carried out by means of physical examination and discussion with specialists. A sleep test might be required to determine a person's repose by monitoring electrical activity in the brain, oxygen levels and breathing patterns.

"When your upper airway is blocked, the body falls short of oxygen and the brain subsequently and automatically wakes you up. This interrupts sleep and you may end up suffering morning headaches and difficulty remembering things," Dr Jakrin said. If left untreated this is likely to lead to uncontrollable daytime sleepiness, poor work and even road accidents.

Treatments for sleep apnoea range from surgical to non-surgical, depending on the severity, according to said otolaryngologist Dr Pasakorn Thavornnan.

Invasive procedures are usually the patient's last alternative. Non-surgical modes include simple ways like regular exercise to shed some body weight or wearing dental appliance while sleeping to adjust facial structure. One of the most common forms of treatment uses a Continuous Positive Airway Pressure machine. This machine comes with a mask for a patient to put on while sleeping to increase air pressure to the throat allowing the people to breathe more easily.

But before reaching that point, healthy sleep habits and a good bedroom environment are key to preventing sleep difficulties.

"Like other aspects of healthcare, sleep habits should be addressed," Dr Jakrin advised. "Otherwise, you may end up having trouble getting to sleep which is likely to result in other more serious diseases."

And so to bed

Neurologist Dr Jakrin Loplumlert shares tips and techniques on how to adjust sleep habits and bedroom environment for quality slumber.

- A bedroom is supposed to be for sleeping only. Placing a television in the bedroom is unhealthy. Blue light emitted from television is likely to reduce the release of the hormone melatonin which helps regulate sleep and wake cycles.

- Go to bed and wake up at the same time every day even if it’s your holiday.

- Excessive water consumption should be avoided before bedtime as the urge to go to toilet might disrupt your sleep. Too much food before bedtime might also cause stomach discomfort.

- The bedroom should be dark and quiet with appropriate room temperature — not too cool or too hot.

- Do not pressure yourself if you still cannot sleep 20 to 30 minutes after you go to bed. Instead, get up and move to another spot which is not too bright or too noisy. Allow yourself to sit there for 15 to 20 minutes and try going to bed again.

- Do not go to bed too early because chances you will have difficulty sleeping given it’s not your regular bedtime. Even if you can sleep, you might wake up in the middle of the night and cannot fall asleep right after. While you cannot sleep, avoid looking at the clock. Checking the time can make you worry.

- Avoid caffeinated drinks after midday, especially those that make it hard to sleep.

- Have a regular workout. Exercise should be done at least three to five hours prior to bedtime as the body’s rising temperature triggered by vigorous activity might disrupt the onset of sleep.

- Expose yourself to enough light — be it natural or artificial — during the day, yet avoid too much light in the evening especially close to bedtime. Exposing yourself to yellow or orange light three to four hours before bedtime might enable you to sleep easier.