Cutting across the southern isthmus would shake up global trade routes, but the long-debated project faces hurdles at home and abroad

The idea to cut a canal across the Isthmus of Kra was shot down almost as quickly as it re-emerged. Within days of reports spreading last month that former prime minister Chavalit Yongchaiyudh had signed a deal with Chinese businessmen to dig a waterway from the Gulf of Thailand to the Andaman Sea, a blunt denial was issued.

“The report is totally fabricated,” Gen Chavalit said. On May 15, he was celebrating his birthday in Thailand, not in China to sign a Kra Canal agreement.

The idea to dig the canal is hardly a new one; it was first mooted more than two centuries ago, and studied in depth when Gen Chavalit was in government. But it has never happened for reasons that range from financial to sovereignty to security. Yet some staunch supporters of the project have not given up on the dream of building Southeast Asia’s answer to the Panama and Suez canals.

The rationale behind constructing a waterway in the isthmus widely known as “the narrow neck of Kra” has often been linked to the increasingly-congested Strait of Malacca, which carries about 40% of the world’s trade as well as the majority of oil bound for China and Japan.

About 100km long, the canal would take around a decade to construct, but would offer an alternative route linking East Asia with India, the Middle East and Europe.

“The fact that the Thai government has denied the alleged agreement with the Chinese government on this project does not in any way mean that the project is not feasible,” said Pakdee Tanapura, vice-chairman of the economic sub-committee of the Thai-Chinese Cultural and Economic Association.

The Kra Canal project is “inevitable”, added Paisal Puechmongkol, secretary-general of the association. “The Strait of Malacca will be too crowded in less than 10 years … What will happen if a large vessel capsizes and blocks the waterway?”

According to the Malaysia Maritime Institute, the Strait of Malacca is unable to accommodate more than 122,600 vessels per year. It is predicted to exceed that capacity within the next 10-15 years.

Another alternative shipping option would be to use the Sunda Strait, which is located between the Indonesian islands of Java and Sumatra, or even Lombok Strait, which connects the Java Sea to the Indian Ocean.

“But those would add six or seven days to the journey,” Mr Paisal said.

The Kra Canal, by contrast, would shave 1,200km — or roughly 72 hours of sailing time — off a journey between China and Europe or the Middle East, meaning significant fuel savings.

The potential benefits for Thailand would include port fees, tolls, foreign investment and infrastructure development. ECONOMY DRIVER: If the Kra Canal were realised, it could become a major competitor to the Strait of Malacca, boosting Thai income from exports.

SOON SPOILT: Building a canal through Khao Fa Chi would take a decade.

According to Mr Pakdee, the Kra Canal project dates back as far as 200 years to the time of Prince Surasri, viceroy of King Rama I.

A proposal was made to dig a waterway linking Thailand’s east and west coasts, but for security rather than economic reasons: Siam was at war with Burma.

“The west coast was a strategic blind spot,” said Mr Paisal, and digging a canal would have enabled Thai soldiers to respond more quickly to a Burmese invasion.

The project never transpired, but it resurfaced again in the mid-19th century during the reign of King Rama III, when international trade was flourishing with the arrival of Western merchants. Again, though, the idea was shelved amid domestic political changes and the shifting geopolitical situation in Southeast Asia.

Although the Kra Canal project has been dusted off from time to time since then, the project never materialised, often due to external pressure as much as internal.

The 1946 Anglo-Thai treaty, for example, forbade the Siamese government from building the canal without first seeking approval from the British government. The British saw the construction of the Kra Canal as a threat to the dominance of Singapore — then a British colony — as a regional shipping hub.

In 1989, Chulalongkorn University’s Science Society of Thailand under the patronage of His Majesty the King released a book entitled Kra Canal and the Future of Thailand. “The government at that time paid no attention to the proposal, saying ‘Nobody knows where to put the soil [that would need to be dug up]’, ” said Mr Pakdee.

The idea was nonetheless revived yet again in 1999. Gen Chavalit, as head of the opposition party, suggested Mr Pakdee work as an adviser to the newly-created sub-committee on the Kra Canal Project, which functioned under the House of Representatives Defence Commission.

When the Thaksin Shinawatra government came to power, Gen Chavalit was appointed minister of defence, and helped to set up the National Committee on the Study of the Kra Canal Project to Alleviate the Economic Crisis.

“We came to the conclusion that the project would be beneficial in many ways. But it would also have an impact on national security, especially in the southern provinces,” Gen Chavalit said last month. “We had to suspend the project, even though we wanted to proceed, because we have to take national security into consideration.”

Gen Chavalit was chairman of the Kra Canal committee and Mr Pakdee was appointed as a board member. But political reasons meant the committee sat dormant for two years. “However, since then I have maintained a personal interest in pursuing research on the Kra Canal Project,” Mr Pakdee said.

He said the Kra Canal corresponds to the idea of China’s “One Belt One Road”, part of President Xi Jinping’s stated ambition to create a new maritime Silk Road. China’s backing would be crucial if the project were to proceed. 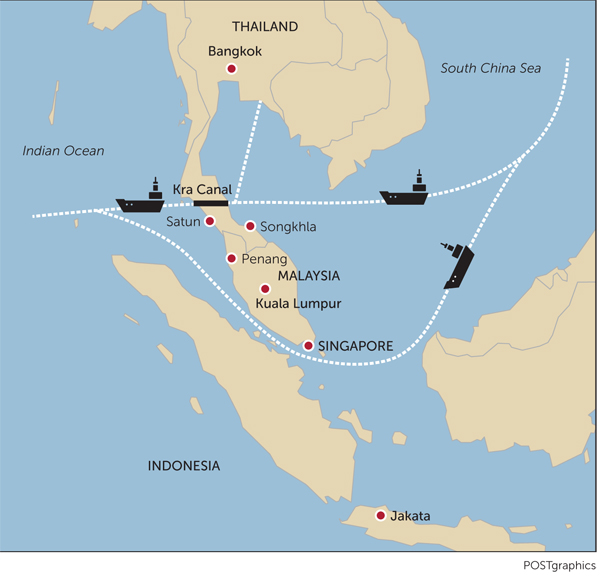 ‘THE OPPORTUNITY IS RIGHT NOW’

The Thai-Chinese Cultural and Economic Association was recently approached by the Beijing-based University of International Business Economics to help conduct a study on the Kra project.

“About 80% of Chinese oil supply has to pass through the Strait of Malacca,” Mr Pakdee said. “The Chinese economy and trade rely on the safe passage of the strait. That’s the importance that China is giving to the future development of the Kra Canal project.”

Mr Pakdee estimated the cost of the canal construction would be US$20 billion (675 billion baht). But he said that cost could be shared by Asia-Pacific countries as a joint investment project.

“The opportunity is right now. We cannot wait until the Strait of Malacca is totally congested,” he said.

Mr Pakdee said distance savings were no longer the major factor in the feasibility of the Kra Canal.

“The Kiel Canal in North Germany saves only 700km but generates more than US$2 billion of income annually. The Panama Canal saves 8,000km and generates US$2 billion as well. The importance is not just about the distance saved, but about the industrial developments around the canal area,” he said.

“Take a look at the examples of Dubai and the Arab Emirates. They invested US$2.5 billion in creating free trade zones in the 1980s. At present, 30 years later, these FTZs already generate more than $90 billion a year.

“The Kra Canal is conceived as an integrated area of industrial and urban development. With its strategic location, the Kra Canal Project could generate much more.”

Digging the canal would be a challenge in itself. But experts say that turning it into a rival to the Strait of Malacca would be another one entirely. “Distance is important but ships have to consider services and facilities as well,” Li Zhenfu from Dalian Maritime University told a regional newspaper recently. “The foundation and reputation that Singapore’s port has built up cannot be replicated immediately.”

The military government under Prime Minister Prayut Chan-o-cha has no plan to realise the Kra Canal project. Maj Gen Werachon Sukondhapatipak, the government’s deputy spokesperson, said: “The government has no policy on the Kra Canal at this point in time. We are not ready. The surrounding environment is not conductive to the project.”

Moreover, “the constitution does not allow the dismemberment of the country”, either physically or politically, he said.

Maj Gen Werachon said there are also other factors to consider, such as the implication the construction of the Kra Canal would have on the insurgency in the far South.

“The canal is not a government priority,” he said.

Mr Paisal said the Kra Canal project would not necessarily have to cut the nation apart physically.

“Thanks to advancements in technology, we can look at constructing water bridges and other options with the capacity to handle large cargo ships,” he said.

Panitan Wattanayagorn, an adviser to Deputy Prime Minister Prawit Wongsuwan, said a project of this size would always have its opponents and supporters. “It would be a massive project with a large amount of investment,” he said.

Mr Panitan said environmental concerns would also weigh heavily on any decision to push forward with the canal construction.

Asked what he personally thought of the project, Mr Panitan said: “I am a bit surprised that we have been talking about this project for such a long time, yet still haven’t reached a conclusion on whether the project is worth the investment. We don’t have adequate factual information on which to base a decision on whether we should go ahead with this project.”

If the scheme did go ahead, Mr Panitan said it would prove a major test of Thailand’s ability to manage such mega projects. Although Thais have had some experience with large infrastructure projects such as airports, he said the Kra Canal would require international cooperation and expertise.

Thailand would need to rely on foreign funding, technology and skills to realise the project, Mr Panitan warned.

“Have we considered the extent and the long time period for which we would have to rely on external expertise, in addition to the consequences from our reliance on external factors?”

However, Mr Pakdee remains hopeful of the project’s viability. Like the Three Gorges Dam in China, which was debated for 60 years before construction began, and the Euro Tunnel suggested to Napoleon Bonaparte over 200 years ago, he said: “Great projects often need time.” n