US actor Matt Dillon visited Sittwe to hear the tales of the world's least wanted people first-hand, and is determined to raise awareness of their plight

Face to face: A woman, 27, tells Matt Dillon about the hardship she and four of her children endured during three months at sea trying to reach Malaysia.

Is there anything anyone can do to help the desperate plight of the Rohingya people, so heartlessly dismissed and abused as non-citizens by the Myanmar government and many of its people?

American actor Matt Dillon thinks there is. He went to visit them first-hand on May 30 and 31 in Rakhine state to see if he could use his international fame to shed some light on their ongoing and seemingly endless misery, and draw attention to one of the world’s most pressing and depressing humanitarian disasters.

The Muslim Rohingya, scorned as almost non-human by much of Buddhist-majority Myanmar, have been treated badly for decades. It was only recently when thousands were found floating in the Andaman Sea — rejected by Thailand, Malaysia and Indonesia — and forced to drift endlessly, slowly dying on packed ships with nowhere to go, that the world started to take notice.

Dillon, a board member with Refugees International, was in Washington, DC on April 28 for the organisation’s 36th anniversary dinner. At the event Rohingya activist Tun Khin was awarded the Richard C Holbrooke Leadership Award, given to individuals who have “demonstrated extraordinary leadership and commitment to humanitarian action”.

Dillon, who has visited refugee camps in South Sudan and Congo, said he was deeply touched by Tun Khin’s speech.

“It was genuine and heartfelt, and it really moved me,” Dillon said.

In Tokyo in May for the press launch of the television series Wayward Pines, Dillon decided to fly to Myanmar to see if he could visit the internally displaced persons (IDP) camps in Rakhine state.

Outside of Sittwe, Rakhine’s capital, Dillon visited four of 15 separate IDP camps scattered along the coastline, as well as a Rohingya village nearby.

According to UN figures there are 97,961 Rohingya in camps near Sittwe. There are about another 70,000 in other camps throughout the state.

The camps were set up after violence racked the state in 2012, leaving hundreds dead or wounded. State security authorities failed to intervene in the violence and, according to a Human Rights Watch report, more than 4,800 Rohingya homes and other structures were burned to the ground or destroyed.

Rohingya IDPs, fearing more violence and consumed by hopelessness for their futures in Myanmar, along with others not interned and some Bengalis from Bangladesh, have been fleeing their homelands by boat. In the past three and a half years more than 150,000 have taken to the sea, packed in boats reminiscent of the African slave trade across the Atlantic. In the past six months the numbers surged with more than 52,000 heading off to an uncertain future.

Only when Thailand cracked down on the people smuggling, and transit camps in the South were discovered containing mass graves of people slaughtered by their handlers, did boats start heading back to Myanmar.

Dillon met with one such unlucky family in a Rohingya village near the IDP camps in Sittwe.

One woman, 27, left Myanmar in February with four of her children, hoping to reunite with her husband in Malaysia whom she hadn’t seen in years.

She spent three months jammed on a boat with more than 400 people drifting on the ocean.

“We were only given a small amount of rice, one chilli and two cups of water a day,” she told Dillon. “If I tried to stretch my legs they beat me. My children cried all the time.”

The woman said the traffickers stole all her belongings on the boat and tried to extort more money from her when she was returned.

Back in Myanmar for several days, she is now homeless and broke, as she had to sell her house to pay for the trip. She survives on handouts from fellow Muslims as she is not a registered IDP and lives outside the camps. 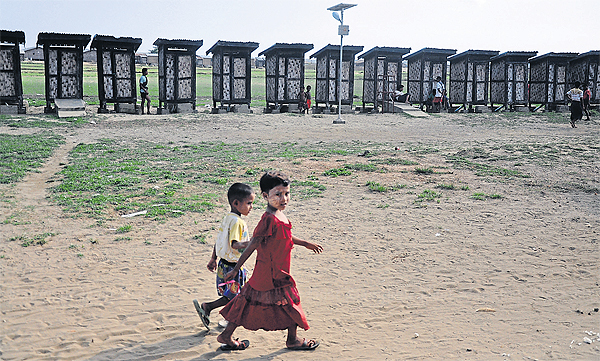 Camp conditions: Foreign aid agencies have built toilets for Rohingya IDP camps near Sittwe, sparking resentment from those outside the camps who are also coping with poverty.

Dillon met with three other teenage Rohingya boys who also tried to escape to Malaysia only to be returned.

The boys, whose faces exuded looks of complete despair, said they had no education, couldn’t read or write and had no way to find any employment.

They too had spent three months drifting at sea before being returned, noting that they had lost about 10kg in weight during the ordeal.

In Ohn Taw Gyi Sector 3 IDP camp, housing about 15,000 people, Dillon met a 62-year-old schoolteacher from Myebon, a town about 50km south of Sittwe.
During the violence in 2012, an organised mob of Buddhist Rakhine came and burned down more than 600 houses.

“The police and the army stood by and did nothing,” the man said. “I saw with my own eyes. They killed my friends and I couldn’t do anything.”

Forced to camp outside on a rocky hill without shelter, the man decided to flee with his wife and six children to Sittwe. He showed Dillon his pink Citizenship Scrutiny Card, indicating he was a “full citizen” of Myanmar, which he said the government no longer recognises.

“There is no future here,” the man told Dillon. “How many years here? I don’t know.”

The man relayed a story of how a pregnant woman came to the camp after she was treated badly in Sittwe town because she was a Muslim. The two IDP camps in the area, catering to the needs of up to 30,000 people, have only one clinic, which is open two hours a day, four days a week and does not even have a certified doctor, but is served instead, according to an NGO source, by a medic or a nurse.

The woman and her unborn child later died due to complications.

The plight of the Rohingya is not likely to improve any time soon. With the advent of the rainy season, boats departing from Myanmar will cease temporarily but when the rains end people will be tempted to try and flee again.

“The [Myanmar] government could have stopped this,” said Phil Robertson of Human Rights Watch in Bangkok.

“They are doubling down on abusive strategies … it’s all about fear-mongering, this Muslim horde that is going to take over Burma.”

“The situation is actually getting worse,” said Matthew Smith, executive director of the NGO Fortify Rights at a panel discussion at the Foreign Correspondents Club of Thailand on Wednesday.

“The Myanmar government has introduced policies that when enacted amount to crimes against humanity,” he added, referring to laws that restrict marriage, child birth, free movement and even the ability of Rohingya to repair their homes.

“I don’t feel like I know more than anyone else,” Dillon said. “But if I can use my voice to draw attention to the situation, I’m happy to do it.

“It’s obvious this is not a natural catastrophe,” he added. “This is apartheid, this is discrimination against one people. People are forced to live in a community that has been ghettoised.”

Passing through Bangkok, Dillon said, “It’s a lot easier for me to raise money for charity than it is for some film.”

With a Twitter following of “only about 500,000”, it will be interesting to see if Dillon’s Hollywood star power can move mountains halfway around the globe. n 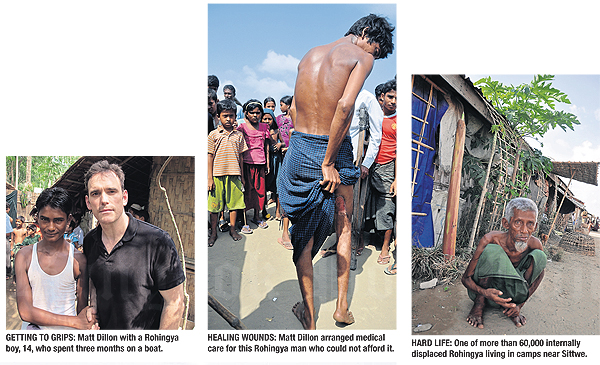 Getting to grips: Matt Dillon with a Rohingya boy, 14, who spent three months on a boat.

Healing wounds: Matt Dillon arranged medical care for this Rohingya man who could not afford it.

Hard life: One of more than 60,000 internally displaced Rohingya living in camps near Sittwe.