Bussaraporn Thongchai is leading the charge of female Thai artists in pushing the boundaries of what is deemed acceptable regarding bodies, gender and sexuality

Bussaraporn Thongchai believes it would have been completely different if her paintings were displayed, say, by the fountain display at Parc Paragon. She's probably right. The main subject of her ongoing exhibition "I'm Not Your Holy Mother" at Ardel's Third Place Gallery is an old and haggard, yet sexually unrestrained version of the mother of Jesus, the Virgin Mary. One piece shows an up-skirt shot of a woman squatting, while the other shows a woman hung upside down on a crucifix, her wrinkled body and breasts weighed down.

Woman And A Big Fish, currently in the exhibition 'My Sisters And Other Ghosts' at The Cross Art Projects in Sydney.

As the exhibition is housed at a gallery space, where, I bet, days could go by without having any visitor at all, such works would have probably caused quite a ripple if they had been shown in a more public space. This has brought about a significant question. Where do Thai female artists, whose works explore body and sexuality, stand now in an ever-growing Thai art scene?

"Thai people can certainly take it, but they are just too pretentious to accept it," said the 29-year-old artist, whose exhibition, on display until this Saturday, also features an Angulimala-inspired necklace, but with 15 little silver-moulded penises: the number of boyfriends she's had so far. Her 2012 exhibition "The Man No.10", also at Ardel's Third Place Gallery, featured portraits of her previous boyfriends with their penises close to their faces.

Artworks that explore sexuality -- whether through paintings, sculptures, performances or photography -- by male artists are received differently from that by female artists. In the Western art world, the gap has greatly diminished, if not already disappeared. Take Marina Abramovic's 1976 Freeing The Body in which she danced for almost an hour naked until she collapsed; Joan Jonas' 1970 Mirror Check; or most recently Sarah Lucas' I Scream Daddio at the British Pavilion at the Venice Biennale this year, in which there were sculptures of erect penises, as well as a number sculptures of female lower parts with cigarettes stuck into various orifices.

"Back in the late 80s to the beginning of the 90s, there were quite a few female artist groups, notably 'Womanifesto' group, who joined and created works related to women's issues," said The Jim Thompson Art Centre's artistic director and prominent curator Gridthiya Gaweewong. "But they didn't specifically point at issues of body and sexuality." 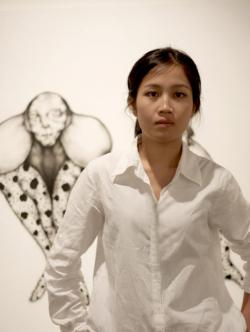 Gridthiya said that even though now there are more and more Thai female artists who dare to question gender and sexuality, there still isn't enough to create any real impact.

Pinaree Sanpitak, whose fans and audience members have, for over two decades now, come to know her by her breast-shaped artworks of various mediums, is the first of just a few names that immediately spring to mind.

"I have not felt any bias or experienced any limited opportunities starting my career here in Thailand as a practising female artist working on the body and gender issues," said Pinaree. "In Thai art, literature and film, the subject of the female body and sexuality is definitely not a foreign subject."

Pinaree said that because her works are semi-abstract, semi-representational and open to interpretation, the viewers can look at them in their own terms. Even though her latest show Ma-lai at Tyler Rollins Fine Art in Chelsea, New York, which recently opened and will continue until Oct 24, diverts from her typical relation to "body" shapes, there's still a hint of an ongoing development of her characteristic moulding.

"I believe in subtle nudges, rather than aggressive punches," said Pinaree. "Ironically, I have had cautious comments on my work such as Noon-Nom in the US. During an artist talk, when I showed an image of the installation in a Bangkok mall with children playing and interacting with the breast-like soft cushions, one of the audience members said that it probably wouldn't be possible to do the same in the US, where even natural human behaviour such as breast feeding is considered improper in public."

If Pinaree's work is to be considered a nudge, what Bussaraporn has been doing could be seen as an explosive assault in the face of conservatism.

"I'm Not Your Holy Mother" is essentially a response to how her Christian boyfriend had previously been in a platonic relationship with another woman and described the nature of that woman as his "holy mother". 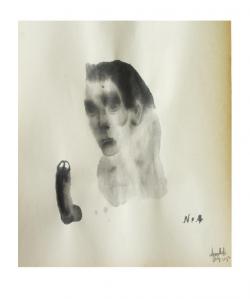 "My boyfriend and this woman have been talking without ever meeting one another for 13 years," said Bussaraporn. "It's like having an affair, though mentally. But I tried not to judge him right away and began to talk through it with him because I couldn't accept that. It's like she was holy while I was the one he came to for confession. That was the beginning of this show and also part of how I got through all this."

But the fact that she's a female artist working on body and sexuality issues was never part of her consciousness, it is simply about telling her personal stories.

"It's the ordinary stuff in everyday life, but people question it because it's been turned into art," said Bussaraporn. "They think art must be the beautiful stuff: the flowers or the landscapes. That's the only art they know. Internationally, works like mine are pretty normal but it's still something you have to keep talking about here."

"Other artists like painting flowers or landscapes," added Bussaraporn. "While I like painting penises and vaginas simply because they are something I feel close and informed enough about."

Her works, notably a big painting titled as Woman And A Big Fish, which feature in an ongoing group exhibition "My Sisters And Other Ghosts" at The Cross Art Projects in Sydney also deal with the same issue.

Art critic Thanom Chapakdee said that even though Bussaraporn uses metaphor through the viewpoint of another religion, the show spurs us to realise the pressure of the tradition of a patriarchal society.

"She's telling society that women are also humans, not goddesses to be worshipped. They are humans who eat, s**t, have sex and go to sleep like everyone else."

Thanom added that on looking back at Thai contemporary art history there has never been any other female artist who has expressed these issues as vividly as Bussaraporn.

"For art in the Western world, revelation of bodies has become something very normal," said Thanom. "And it's through this art concept that personal space and stories are bared out to the public more. In the Thai contemporary art scene, however, it's still very difficult for society to accept, despite the fact that this type of work [like Bussaraporn's] is one of the most powerful of its period." 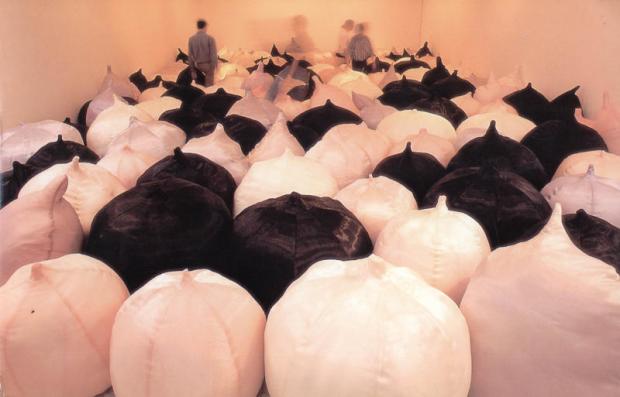