This August file photo taken shows a boy pulling his sledge at Snow Town in Bangkok. Across the notoriously sweltering metropolis, locals are flocking to a growing number of attractions offering Thais the chance to experience something few ever witness at home -- snow and ice. (AFP photo)

In a hall filled with psychedelic ice sculptures, there are shrieks of excitement as a toboggan careers down an ice run, its occupants snugly wrapped up against the sub-freezing temperatures.

But this is no fun park in an icy Siberian wasteland -- this is tropical Bangkok.

"It feels good," 28-year-old Songphol Taesinlapasathit tells AFP, his breath visible in the chilled air. "I want to move here so that I can run away from the hot weather."

Across the notoriously sweltering metropolis, locals are flocking to a growing number of attractions offering them a chance to experience something few ever witness at home: snow and ice.

While foreigners head in droves to Thailand to soak up the sun on palm-fringed beaches, many of those visiting the Harbin Ice Wonderland on the outskirts of Bangkok are looking for the exact opposite.

More than 600 tonnes of ice have been used to create a smorgasbord of sculptures ranging from colourful octopuses to a mock Eiffel Tower.

Named after the northeastern Chinese city that holds an annual ice sculpture festival, temperatures inside the frozen Thai version are kept at minus 15 Celsius, a whopping 50 C swing from the sticky Bangkok streets outside.

It is just one of a number of attractions that have sprung up in Thailand with an icy theme. 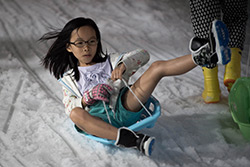 A girl keeps her balance while sledding at Snow Town in Bangkok in this August file photo. (AFP photo)

But finding respite from the heat is not without consequence.

One of Southeast Asia's more wealthy and urbanised nations, Thailand burns through huge amounts of fuel to keep its malls, offices and homes cool.

Bangkok is a particularly acute offender, with residents using up twice as much electricity on average as their fellow Thais, according to one academic study from 2013.

Malls play a significant role in this consumption.

An investigation last year by Mekong Commons, a regional environmental website, found that some of Bangkok's biggest malls used up more electricity on their own than entire rural provinces.

Some fear the latest craving for an artificial arctic experience will only add to this excessive consumption.

"Those ice and skate places will help destroy the environment for sure as they use up natural resources," he added.

It is not just at home though that Thais look for fun out of the sun.

Thanks to the huge expansion of budget airlines across Asia regional ski destinations are significantly more affordable for middle-income countries like Thailand.

Since waiving visa requirements in July 2013, Japan has seen a huge influx of Thai tourists.

In 2014, 95% of Thais travelling abroad on holiday -- 430,000 -- headed to Japan, spending the equivalent of more than a half-billion US dollars, according to Thailand's Ministry of Tourism and Sports. 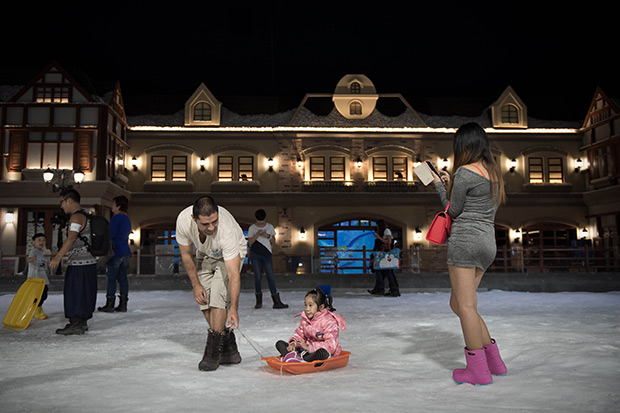 A woman takes a picture with her smartphone of a man and a girl at Snow Town in Bangkok in this August file photo. (AFP photo)

For those unable to afford a trip abroad, Thailand's northernmost mountains are the only area of the country that sees a frost during its brief winter.

Traditionally, couples go there for romantic New Year's Eve breaks -- a chance for a tryst away from the heat of the lowlands. The rest of the year, snow parks offer a cheap alternative to an overseas break.

At one visited by AFP in an affluent eastern Bangkok neighbourhood, machines were churning out fresh flurries onto slopes filled with excited locals trying their hand at skiing or making snow angels.

Saowanee Nimthong, 27, was one of many visitors taking selfies with friends.

"If there was snow in Thailand, at least once in my life I would walk around naked to see how long I could stay out," she said with a giggle before returning to her friends.