Veteran activist forges on with campaign to protect the rights of everyone in Thai society.

‘Equality of rights between men and women is equally given by nature from the day they are born,” says Supensri Puengkhoksung, who is known as “Pa Ko” for her pivotal role in campaigning to end violence against women and girls. 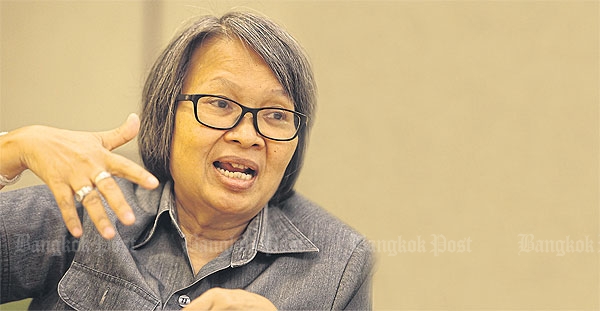 Supensri Puengkhoksung, also known as ‘Pa Ko’ to her supporters, shares her experiences as a labour activist fighting against violence for women at the National Human Rights Commission. Tawatchai Kemgumnerd

As a manager of the Social Equality Promotion Foundation, a private organisation campaigning for human rights, the activist and the foundation help not only women but anyone who falls victim to abuse in any form, be it verbal, physical or sexual.

Triggered by her personal perspective on justice and equality, Ms Supensri has developed a firm belief that every human being has equal rights no matter their sexual orientation or gender.

Born to a humble family in Nakhon Ratchasima province, the young Supensri's first job was in a factory working for a major electrical appliances manufacturer in Bangkok. It was her first experience of the life of a worker and the rights they have or do not have.

The year was 1976. For the country, it was a tumultuous and painful year. A victim herself of unfair employment in the factory, she joined the student protest movement on Oct 6, 1976, which led to the infamous massacre at the hands of the authorities. She was fighting for better treatment of workers and came away realising that this struggle might never end.

To be a social campaigner for rights, however, requires strong convictions and compassion for the suffering of others. She decided to enrol in law and management programmes to gain the knowledge needed to help those workers who do not know the law and are taken advantage of by their employers.

During the 1970s, she became the first female president of the country’s first labour union which was established under the 1975 Labour Relations Act.

She then went on to become an associate judge for the Labour Court as well as a consultant to labour unions at the Friends of Women Foundation.

In the late 1970s, the feminist movement was growing strongly in Thailand and from the ranks emerged activists with a determination to stop violence against women. Ms Supensri was one of them.

Her aim is to encourage victims of abuse and domestic violence to stand up for their rights as well as spur public awareness of the violent acts committed against women and children.

Physical assaults on women are common at home and in the workplace. Many victims are sexually abused by family members, particularly a father or a husband, and high-ranking officials who quite often hail from influential families.

Some are beaten, some endure torture like cigarette burns, Ms Supensri says.

The problem is rooted in the misleading attitude that men are the dominant species, while women are fragile and submissive.

Wives are indoctrinated into believing they must obey their husbands and that to file charges against a spouse for abuse is not acceptable.

Ms Supensri says the social status and credibility of offenders is a serious impediment to reporting crimes of abuse, and the main reason many victims suffer in silence.

The victims do not have the courage to ask others for help as they are afraid no one will believe them.

Besides social attitudes, alcohol and drugs are major factors in exacerbating situations of violence.

From Ms Supensri's experience of working with victims of violence, it is rare to see women stand up for themselves, particularly when they were left to deal with problems alone. “For some women, all they can do is cry,”  she said.

Her advice to the victims is to restore their equilibrium and rational thinking as quickly as possible, and then try to get some positive thoughts flowing to help them to move on.

“In Thai society, women have always been subdued and chained to the popular social attitudes that result in their exploitation,” she said.

Experts on domestic violence say women victims struggle to break free of the social norms to help them escape brutality in the home. But they cave in to social pressure because they fear the stigma of filing a divorce and of being "abandoned".

They don’t have much confidence to make decisions on their own as they are worried about what other people think of them, Ms Supensri believes.

Therefore, public and private organisations which have expertise in these issues and in legal matters must play a key role in providing assistance to the victims.

But this can lead to other problems. Ms Supensri has received threatening phone calls warning her to withdraw from legal cases she has helped to mount against abusers. She knows the calls come from high ranking officials and those with close ties to prominent figures.

“I refuse to budge,” she says, believing she cannot let the women she is helping know that she might also be afraid.

The activist insists that victims need every possible protection under the judicial system.

She said society condemns women for "inviting rape" by wearing revealing outfits. But that is misleading because in most cases the victims are dressed soberly.

“Whether a women is raped has nothing to do with the way they dress. Even if a women is dressed in sensible outfits, they are still a target of indecent stares.”

In order to address the root cause of the problem, Ms Supensri believes big changes are needed in social values. Men must be taught to respect the dignity and honour of women.

People who witness violence against others can also take part in protecting and helping the victims instead of viewing the issue as strictly a personal matter.

Ms Supensri said violence against women is told and retold through tragic stories splashed across the pages of newspapers. But many more such real-life stories keep recurring.

Iang, a 49-year-old female teacher, suffered severe burns over 50% of her body after her former husband doused her with petrol and set it alight when she told him she wanted a divorce.

At first she was in deep shock and very depressed at looking at her reflection in the mirror. Her family and Ms Supensri counselled her, telling her to leave the ordeal behind and plan for the future as this will heal the suffering.

Ms Supensri has since visited her several times and persuaded her to subscribe to a support group where she can share her story with other victims of violence.

Ms Iang is now following the group therapy approach of getting together with others and speaking about their problems.

Even though Ms Supensri’s work mainly centres on ending violence against women and girls, her foundation is expanding its campaign for equal treatment to others.

The new campaign aims to help people regardless of sex, race or religion who are unfairly treated in education or employment in a bid to create social equality. 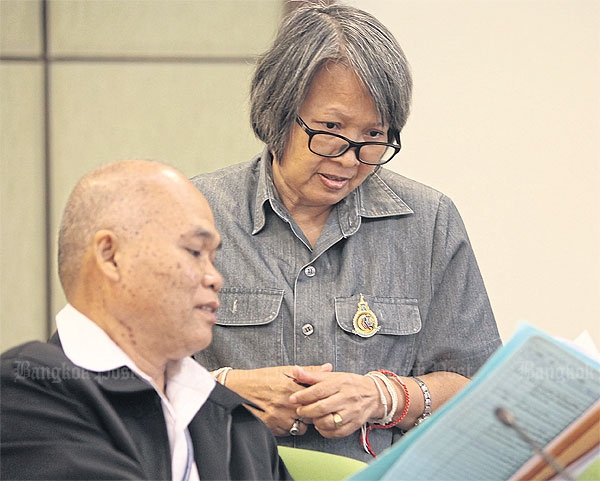 Ms Supensri, manager of the Social Equality Promotion Foundation, explains labour issues to a participant in a meeting with the National Human Rights Commission. Tawatchai Kemgumnerd 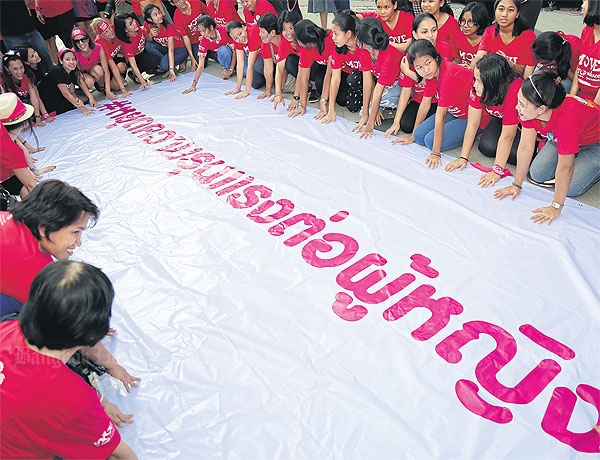 A women’s group spreads a banner reading ‘Stop Violence Against Women’ outside the Bangkok Art and Culture Centre in March. Narupon Hinshiranan 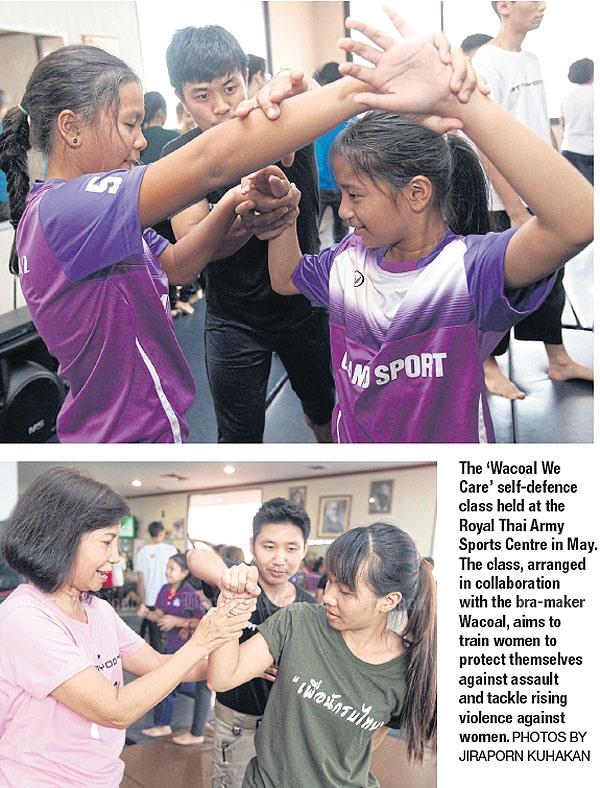