Portraits of misery beneath the surface
Thailand
Special Report

Portraits of misery beneath the surface

A photo exhibition in Myanmar highlights the true cost on the environment and lives in the country's booming mining sector.

Fine, black dust blankets nearly everything in Tigyit. It settles on rooftops and blows inside homes, bringing with it a noxious odour that clings to clothes and skin. In the dry months, locals say, it coats their crops, causing them to fail. 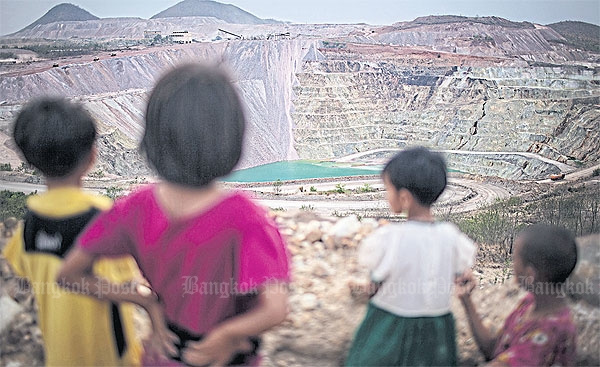 Helping hands: The children of freelance miners gaze at the expansive Letpadaung Copper mine. Many of these children work with their parents carrying heavy stones from the top of the mountain down to the manual filtration systems their parents have set up.

A river passes through the village, snaking its way down to the picturesque tourist destination of Inle Lake less than 25km away. But the waterway is off limits to residents, its water now too toxic to drink or even bathe in.

Just over a decade ago, these homes in Tigyit were located in separate villages about a kilometre upstream. Now, that site is home to Myanmar’s largest open-pit coal mine.

The mine — about 500 metres wide and more than 60m deep — can produce nearly 2,000 tonnes of lignite coal every day, much of which is fed into the neighbouring coal-fired power plant.

But it also produces more than 100 tonnes of toxic fly ash which, along with coal dust and other hazardous mining byproducts, pollutes the surrounding air and soil and flows into fragile waterways that support the livelihoods of tens of thousands of people.

Before the mine opened, about 400 fishermen cast their nets in Inle Lake. Now, as fish stocks dwindle and contamination worsens, that number is less than 30.

They dug under two villages — Lai Khar and Taung Pola — testing for viable coal seams. Soon, more than 500 acres of land, including the villages, had been awarded as a mining concession to a conglomerate led by China National Heavy Machinery Corporation.

For some locals, news of the relocation was welcome; they dreamed of selling their land for higher prices. Several residents of a nearby town even went to Tigyit to purchase plots. In the end though, locals were paid less than 10,000 kyat — about 270 baht at today’s exchange rates — per acre and forced to resettle without assistance.

Operations at the mine have been on hold for the past few months as work is under way to renovate the coal-fired plant. The monsoon season has just passed, washing away the traces of toxic dust. But erasing the mine’s harmful legacy will be more difficult, particularly with operations set to resume early next year.

Suthep and his team had originally planned to stay in the village, but were barred by police, who claimed the area was unsafe. “The real reason, we knew, was that they didn’t want locals to speak to the media,” he said.

But if that was the strategy, it failed.

Suthep, also barred from entering the mine site itself, decided to turn his camera on the toxic effects it has had on the local population, and found them only too willing to share their stories.

“The biggest problem is health issues. Locals complain of breathing problems and skin diseases,” he told Spectrum. “They were happy to tell me what was happening, as there are very few media there.”

He met Hla Shwe, a 61-year-old army veteran who had worked as a security guard at the mine site.

“Caught in heavy rain while patrolling one night, I became seriously ill,” Hla Shwe told Suthep. “I couldn’t walk properly and suffered from terrible dizziness.” He also complained of coughing up blood.

“The doctor said, ‘It’s because of the bad smell and dust from the coal mine.’ ” Hla Shwe said.

Ten days after quitting his job, Hla Shwe’s employers withdrew his medical support, leaving him to apply for government assistance. “I have no idea for sure whether I will get compensation or not,” he said.

The situation in Tigyit is emblematic of a broader challenge in Myanmar as it grapples with the lucrative yet often devastating consequences of opening its doors to foreign investment. The country is rapidly being stripped of its natural resources by companies which operate with little official oversight, while local people see few if any financial benefits.

“I think this issue in Myanmar is something we need to highlight,” Suthep said. “The problem is that the country is very rich in natural resources, but the people have no rights.”

The Unearth exhibition aims to provide a graphic snapshot of this harmful reality. Running until Dec 19, the 30 photographs were commissioned by the Natural Resource Governance Institute in an effort to “shock viewers” about the consequences of Myanmar’s resources rush.

NRGI’s Myanmar manager, Matthieu Salomon, told Spectrum that while some progress had been made by the outgoing military-backed government — particularly in committing to the Extractive Industries Transparency Initiative (EITI) — locals still see few benefits from the extractive industries.

“Myanmar needs a long-term plan, developed in consultation with local stakeholders, to ensure it gets the most benefit from its natural resources,” he said.

He hoped the images would be able to speak to a larger audience, “shocking viewers [and] complementing research reports less easily accessible to the public”.

“Extractives are by definition finite, and Myanmar needs careful consideration of costs — both environmental and social — and benefits of projects,” he said.

The exhibition showcases work from six acclaimed documentary photographers: Minzayar Oo and Yu Yu Myint Than from Myanmar; Americans Lauren DeCicca and Andre Malerba; Suthep; and Matt Grace from the UK, who is also the director of the Deitta gallery.

Suthep said he had known most of the photographers for some time, having worked extensively in the country’s remote corners for several years.

“We discussed as early as last year that we should doing something on the extractives industry, because it has changed a lot and with great speed in the last couple of years as the country has been opened up to foreign investors. A lot of not very nice things have happened,” he said.

The result is an exhibition that covers a diverse range of industries, from copper and gold mining to oilfields and gas pipelines.

The exhibition will be brought to Bangkok next year, Grace said, though details are yet to be finalised.

Unearth, Mr Salomon said, was timed to coincide with last month’s elections and the publication of Myanmar’s first EITI report, due next month. But the timing proved even more prescient than anyone could have planned.

Opening on Nov 24, the exhibition launch fell a day after Myanmar suffered one of its worst mining disasters, as more than 100 people were killed by a landslide which swept through several jade mines in northern Kachin state.

The disaster came one month to the day after the release by Global Witness of a report which found the country’s jade trade was worth up to US$31 billion annually, most of which was funnelled into the pockets of military elites and drug lords.

Myanmar photographer Minzayar Oo has travelled extensively through Kachin state in recent years documenting the extraction and trade of the precious stone. “I spoke with a man worried that this ‘land of jade’ could be left barren within a decade — destroying any hope that the region’s rich endowments of gemstones would fuel local development,” he said.

His work has looked extensively at the lives of freelance miners, many of whom he said “live in poverty and are addicted to heroin”. For the exhibition, he turned his lens on the illegal trade of the precious stone across the Chinese border.

“Although the jade border trade is illegal under Myanmar law, I visited many businesses displaying raw jade from Myanmar in the streets of Yin Jiang,” he said. “Some shops display a Chinese certificate of legality, but others do not.

“Re-entering Kachin state, I passed a camp for refugees displaced by fighting between the Myanmar military and the Kachin Independence Army. My head swam with questions: How much of the jade produced in Myanmar is vaporising, uncontrolled, into China? What is the value of the illegal trade?

“Most importantly, how could this lost revenue help rebuild the lives of refugees, impoverished miners and others living in Kachin state?”

The Unearth exhibition runs until Dec 19 at the Deitta gallery in Yangon. For more details visit www.deitta.org or www.resourcegovernance.org. 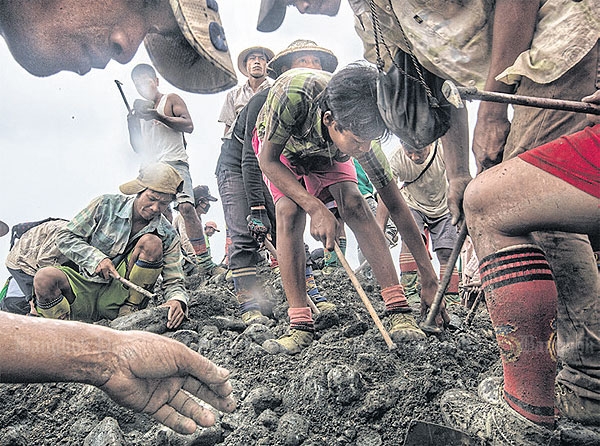 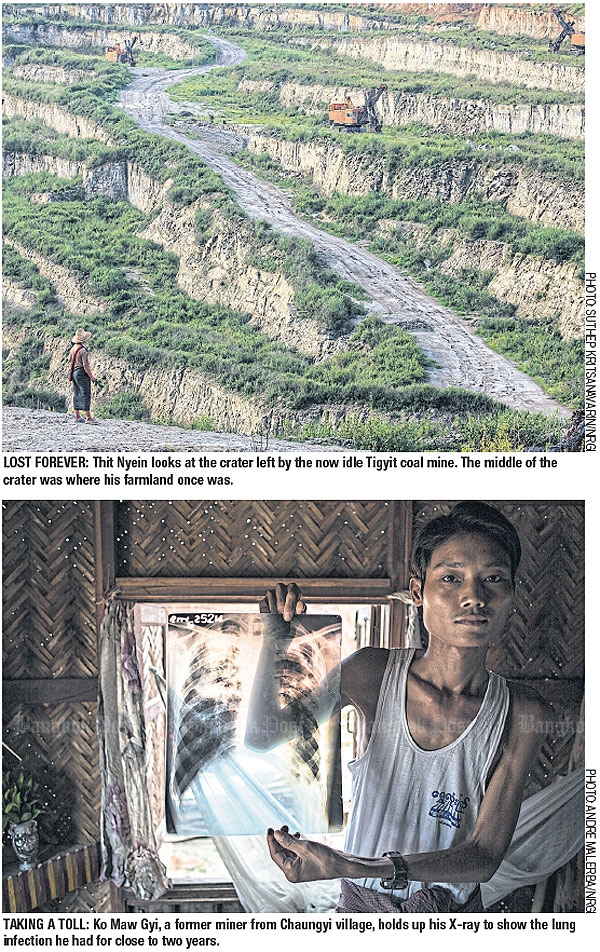