Calls for justice: How smartphones allowed a country to share its anger
Thailand
Special Report

Calls for justice: How smartphones allowed a country to share its anger

Despite police and the ruling junta blaming “instigators” for stirring trouble across the border over the Koh Tao murder trial, the truth is more likely a click away.

The anger spreading in Myanmar over the death sentences handed to Myanmar migrant workers Zaw Lin and Win Zaw Htun, both 22, for the murders of British backpackers Hannah Witheridge and David Miller, is a reflection of the growing influence of social media in the country.

The majority of comments express anger, disgust and despair over the perceived mistreatment of the two Myanmar nationals. But others temper their arguments by calling for better understanding of the Thai judicial process and blaming failures of the Myanmar government to provide work opportunities at home.

Prior to the court decision being handed down on Christmas Eve, many social media users in Myanmar were closely following the case on the Thai Facebook page CSI LA, which was highly critical of proceedings. Their anger only peaked after the death sentences were announced.

Popular Myanmar singer May Khalar, who has more than 38,000 Facebook followers, posted a photo of the two migrant workers along with a lethal injection bed.

She said she could do nothing but cry when she learned their fate.

“Earning money abroad due to poverty, but facing injustice makes me feel unpleasant,” she wrote. “Please save our two kids. I felt nothing inside when I saw the place where the death sentences will take place.”

The post was liked by 5,255 people and shared 21,986 times. The singer later joined the protests against the death sentences at the Thai embassy in Yangon.

“The commander-in-chief expresses his respect for Thailand’s judicial process,” he posted. “But he wishes a review of the evidence. It is very important to avoid a situation in which the innocent are wrongly punished rather than the culprit.”

Since the 2011 election, when the Myanmar military assumed power under the guise of a new civilian government, economic liberalisation has led to growth in the telecommunications industry. 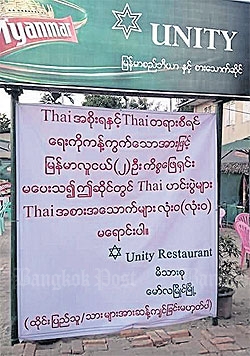 Foodie protest: Thai cuisine is off the menu at Unity Restaurant after the Koh Tao verdict.

The government granted licences for foreign investment companies in the  telecommunications sector, resulting in easy access to affordable SIM cards. By August 2015, Myanmar had 29 million mobile phone subscriptions in a country with a population of 53 million. Ten million were registered with the Norwegian-based Telenor, 14 million with state-controlled Myanmar Post and Telecommunication, and five million with Qatar-headquartered Ooredoo, which is expanding its operations in Africa, the Middle East and Southeast Asia.

Telenor and Ooredoo report a large 80% smartphone usage rate, compared to 75% in the US, confirming industry analysts’ predictions that emerging Myanmar will predominantly be a smartphone user country.

Telenor predicts that by the end of this year there will be more than 38 million people with access to the internet, or 60% of the population, compared to less that 2% in 2012.

Facebook use has also grown rapidly, with nearly seven million subscribers as of last November, according to internetworldstats.com, which tracks global internet usage. Other social media such as Twitter and Line are less popular. But Viber is gaining a foothold, mainly as a cheap method of making calls to friends and family working overseas.

Social media has made the biggest impact in urban areas where it is not only popular for socialising, but also as the main source of news and information.

After winning the November election in landslide, Aung San Suu Kyi acknowledged in a BBC interview the communication revolution happening in Myanmar, saying people are getting on the internet and informing everyone about what’s going on.

However, social media can also be abused, and it was used to spread hatred when sectarian violence took place between Buddhist extremists and Muslims last year.

Like the cyber laws used to silence critics in Thailand, Myanmar also has telecommunications acts to quell dissenters.

Myanmar’s junta has in the past used the draconian Electronic Transactions Law to jail activists and dissents who “harm state security” for up to 15 years. After the new government came to power in 2011, the law was amended to change the custodial penalty to a maximum of seven years.

Recently, Chaw Sandi Tun, who was detained in October for a Facebook post, was sentenced under Section 66(d) of the Telecommunications Act to six months in prison for satirising the military. Her crime was to compare the colour of army officer’s new uniform with a longyi worn by Mrs Suu Kyi. It was the first sentence handed down in Myanmar related to a Facebook post.

Another Facebook user, Patrick Khum Jaa Lee, was arrested recently for a post that showed someone stepping on a photo of Gen Min Aung Hlaing.

After the Koh Tao verdict was handed down on Dec 24, hundreds of Facebook users in urban areas of Myanmar and towns close to the Thai border posted calls for protests against the decision.

Users urged people to gather at the Thai embassy in Yangon, while protests also started in Mandalay and border areas such as Myawaddy and Tachileik.

The anger being expressed was not only against Thai authorities, but also against the Myanmar government for not standing up for its citizens. “We sacrificed the lives of two of our citizens due to poor government administration,” wrote Facebook user New Win, who posted a photo of one of the convicted men’s mothers crying after the ruling. “I hate our government because they lead us not knowing what the law is.”

Ko Ko Gyi from the 88 Generation Peace and Open society group, who has 40,423 Facebook followers, also blamed the Myanmar government.

“We all have a responsibility [to ensure] that all of our citizens are treated fairly and in a dignified way, not only in our country but also abroad,” he wrote.

Ko Ko Gyi also questioned the Thai judicial system, saying that although the Thai Human Rights Council had pointed out weak points in the case, the court had still handed down the death penalty.

Further anger erupted among Facebook users when the Bangkok Post daily edition ran a headline saying “Envoy accepts Koh Tao ruling”. Ambassador Win Muang later issued a correction to the story, saying he “respected” the decision, but did not accept it. He called for the Thai government to review the case, a sentiment echoed by Myanmar’s military leader.

President’s Office spokesman Hmuu Zaw took to Facebook to defend the efforts of the ambassador, but not all Facebook users in Myanmar were convinced.

“We need to be careful reading the news of the government,” said one Facebook poster. “They said different things to the Thai media so we need to try to read both versions of the stories.”

As the protests escalated, the Thai embassy in Yangon decided to close its consular section from Dec 28-30. Thai police were left defending their handling of the Koh Tao murder case and claiming that the protests were being instigated by a person wanting to cause problems for the government. Prime Minister Prayut Chan-o-cha lashed out at the protesters and critics of the ruling, saying the two migrant workers could still launch an appeal.

As nationalist sentiment grew, social media users urged boycotts of Thai businesses and products and the closure of border gates. Photos of the Unity restaurant in Mawlamyine, which stated they would not sell Thai cuisine until the Prayut government reviewed the verdict, were shared online.

“Thai hater” groups sprung up on Facebook, but gained little popularity, while others urged social media users in Myanmar not to disrespect the Thai monarchy, flag or its citizens. Despite the anger, opinions were also posted on Facebook expressing sympathy and calling for understanding.

Thai model and actress Panipak Liky, who has 14,400 Facebook followers and starred in the Myanmar film The Spa, told her fans in Myanmar she understood their feelings. She said while she disagreed with the verdict she hoped the situation would be solved in the right way.

“But I want you guys to understand me too,” she wrote. “I am just an actress who doesn’t have the power to force or judge this case by myself. I’m also a Thai citizen who has to be under my country’s law, so please kindly understand my position.”

Her post was well received in Myanmar. It was posted as a news item on DVB TV’s Facebook page, and has been viewed by more than 116,000 people, with over 4,000 likes and 630 shares.

Film director Kyi Phyu Shin warned Myanmar people that while they may be angry with the judgement, they should not direct their anger at an entire nation. “It is very important not to be rude to Thai people who are not related to the case,” she wrote.

Singer and composer Saung Oo Hlaing said the best long-term solution for Myanmar was to improve education and living standards. “We are in their hands because our country is poor,” he wrote on Facebook. 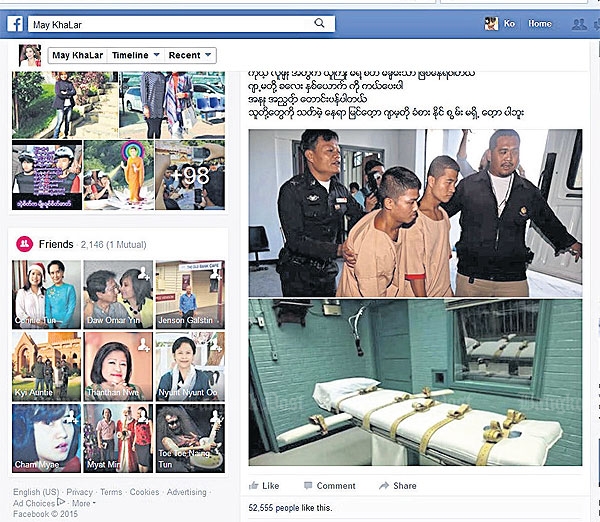 Grim fate: Singer May Khalar’s criticism of the Koh Tao verdicts was shared more than 20,000 times.