Wealthy couples are increasingly being lured to exotic locations for their big day, and tourism authorities are employing some unusual tactics to ensure Thailand is their top choice for the lavish celebrations and parties.

LAVISH LOCATION: No expense was spared at this Indian wedding at the JW Marriott Phuket Resort and Spa. Many of Thailand’s leading resorts and hotels now cater to Indian weddings.

Jas Singh’s 2010 wedding was not a typical Sikh gurdwara ceremony. Instead of being held at a temple, the bride and groom, along with 200 guests and a priest, flew to Thailand from Bangalore for a beach wedding in Hua Hin.

The decision to marry at a luxury hotel in the popular seaside resort was an almost spontaneous one, as Mr Singh, a wealthy car dealer, enjoyed visiting Thailand and had seen pictures of his friend’s wedding here.

The arrangements for the two-day celebrations were Indian-style, with lots of music, food and dance performances by family members. The wedding ceremony was held on the second day on the beach while the sun was setting, with an elephant transporting the groom during the baraat, or wedding procession. The night ended with a wedding party and massive buffet.

“On the last night when we were told that the party had ended [at 2am], all my friends just jumped in the swimming pool [and stayed there] until 6am,” Mr Singh, 31, said. “Me and my wife were thrown in by our friends in our wedding clothes.”

The wedding cost five million baht, a price Mr Singh said was “good value” and slightly cheaper than what a comparable wedding would have cost in India.

“When you do a destination wedding, you get a shorter guest list,” he said.

Mr Singh and his wife are among the hundreds of Indian couples annually who choose Thailand as their wedding destination, each spending millions of baht to host lavish ceremonies — some going up to 100 million baht — which usually last for several days.

“Since it usually costs them a fortune, most Indian families will save for a wedding,” said Satish Sehgal, president of the India Thai Business Association. “There is no other wedding celebration that takes as long as an Indian wedding.”

When Mr Sehgal was asked by the Tourism Authority of Thailand to suggest a way to attract the high-end market from India, he sold a unique concept: convince millionaires and billionaires to organise their weddings in Thailand.

That was almost a decade ago, when the number of Indian tourists was about half a million per year, compared with a little over a million today.

Mr Sehgal and his team compiled a list of 100,000 Indian millionaires and billionaires and sent out two mailings: the first introducing Thailand as an ideal wedding destination, and the second a follow-up invitation. Each letter was signed by the TAT governor.

The personalised invitations proved successful and the response was overwhelming. People began making inquiries at the Thai embassy and TAT office in New Delhi.

Within four months, business began flowing in from India.

Ten years later, Thailand is already the top global destination for Indian weddings, with up to 300 held last year, according to the Thai Indian Wedding Association (Tiwa).

For Mr Sehgal, the next move was to hire beauty contest winners to give the promotions work an extra boost.

In May last year, 33 contestants participated in the final round of the Indian Princess 2015 beauty pageant held in Bangkok. 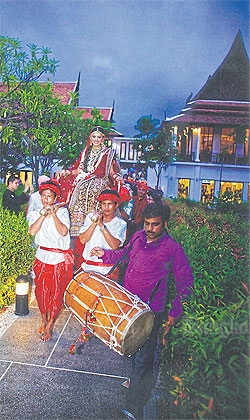 GRAND ENTRANCE: A bride is carried into her dream wedding in Khao Lak.

The contestants now act as marketing representatives who receive a “finder’s fee” for any business they bring in. In addition, three “beauty queens” were given the title of Miss Thailand Wedding Destination, with their role to act as brand ambassadors in India.

While Indians learn about Thailand as a wedding destination from gossip columns in high-society magazines and media, it is the job of these brand ambassadors to find out who, among the urban rich, has been recently engaged. They then visit these people with the aim of convincing them to choose Thailand as their wedding destination.

The beauty pageant idea was initiated by the India Thai Business Association with the active support of the TAT.

“These girls get invited to functions, parties and weddings. People talk; ‘So and so is going to have their son or daughter married.’ It is at the Indian weddings where they find out this information,” said Mr Sehgal, a 72-year-old Indian who has lived in Thailand since the age of five.

“I made all the contestants promise that if they get married they will organise their wedding in Thailand too.”

Indian hosts spend an average of between five and 10 million baht per wedding for 200-300 guests, according to Tiwa, with the largest expenditures being on accommodation and food.

That figure does not include airfares for the guests, which are often also paid for by the hosts.

While there are no official statistics of Indian destination weddings in Thailand, Tiwa estimates there were 250-300 such ceremonies last year, with expenditure ranging from three million to 100 million baht per wedding.

“The industry is fast expanding and is already a billion-baht business,” said Tiwa president Ram Sachdev. “Indian weddings are coming from all over the world.”

While India is a major market, only 50% of the Indian weddings that come to Thailand are actually from India itself. The rest are Indian nationals from Dubai, Singapore, Hong Kong, Indonesia, the US, Europe and South Africa.

There were 90 Indians with a combined net worth of US$295 billion ranked in last year’s Forbes Billionaires List, meaning the country has the world’s third-highest number of billionaires, behind the US and China.

“These children of millionaires and billionaires are foreign educated and are very liberal in their thinking. They want to do something different, like having tigers and lions present,” Mr Sehgal said.

The baraat procession traditionally has the groom riding on horseback to claim his bride. But any carriage can be used: an elephant, camel or even a Rolls-Royce.

“Indians are some of the largest tippers, leading to a positive response towards Indians,” he said. “Because of that, the hotels are more willing and happier to cater to these weddings.”

Prime Minister Prayut Chan-o-cha mentioned the importance of the Indian wedding sector in one of his weekly television programmes in December 2014. 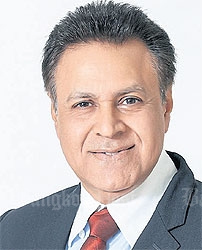 “I have learned that Indians are interested in organising weddings in Thailand,” he said. “We should look into how we can invite more of them to travel here for their weddings. Increase the amount of special flights, maybe?”

India is now one of Thailand’s fastest-growing tourist markets. In 2015, Indian visitors to Thailand totalled 1.07 million, a 15% increase year-on-year, according to the Immigration Bureau.

The value of the international wedding and honeymoon market in Thailand is estimated at 30 billion baht per year, or about 3% of overall tourism revenue, according to the TAT.

“Thailand has a wide range of destinations to offer for the entire wedding party, although we have noticed there is a distinct preference for beach resorts,” said Runjuan Tongrut, who stepped down from her position as director of the TAT’s New Delhi office earlier this month.

Next month, around 20 wedding planners from India will attend a wedding symposium in Hua Hin to survey the wedding and honeymoon routes along Bangkok-Rayong-Pattaya, Bangkok-Phuket-Khao Lak and Bangkok-Kanchanaburi-Hua Hin; with Rayong and Kanchanaburi as emerging markets

Mr Sehgal said the cost of organising a wedding in Thailand when compared to India is generally 30-40% cheaper, with rates in a five-star hotel here very competitive compared with their Indian counterparts.

Hotels in Thailand can also provide cheaper and more diverse meal choices. A host could pay 1,000 baht to get eight dishes of food at a Thai hotel as opposed to five dishes in India, said Mr Singh, the Bangalore car dealer.

In organising large-scale weddings, hosts usually need to book more than one hotel to accommodate their guests. Last year, for instance, a wedding was held in Chiang Mai with 700 attendants booked at four hotels.

“This brings direct and indirect benefits to the tourism industry during the course of five to seven days: men go for golf, women go to high-end shops, children go to amusement parks,” Mr Sehgal said.

Couples interested in getting married in Thailand usually go through a wedding organiser in India, who then deals with organisers here who specialise in Indian weddings.

Anantara Riverside Bangkok Resort handles close to 12-14 Indian weddings a year, most of which cater to about 300 guests. They receive some requests through Indian wedding planners, but in recent years, interested parties have been calling directly to the hotel.

“There have also been instances when a family member or friend of a couple who have had a wedding with us call us for their own wedding,” said Anantara public relations manager Khanut Bunnooklub.

Mr Sehgal said there are about a dozen local wedding organisers catering to the Indian market, most of them Thais of Indian ethnic origin. But he encourages more Thais to handle the business. “A Thai company would probably need Hindi-speaking employees who understand the requirement of Indian weddings, who know the habit of Indians when it comes to food and their preferences,” he said. “It can be Thais who studied in India, or ethnic Indians.”

Meanwhile Tiwa, which was launched in September last year to promote the Indian wedding industry in Thailand, is expected to reach almost 100 members this year, ranging from hotels, destination management companies, event and wedding planners to photographers and catering companies.

It will launch its first marketing campaign this year to promote the industry, holding roadshows in Singapore, Hong Kong and Dubai — Thailand’s main competitors in the lucrative wedding market.

“We want to train hotels that are interested in hosting Indian weddings to be more prepared and to better understand Indian culture,” said Mr Sachdev. 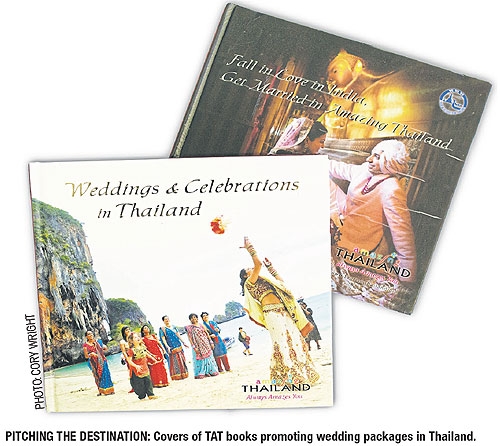 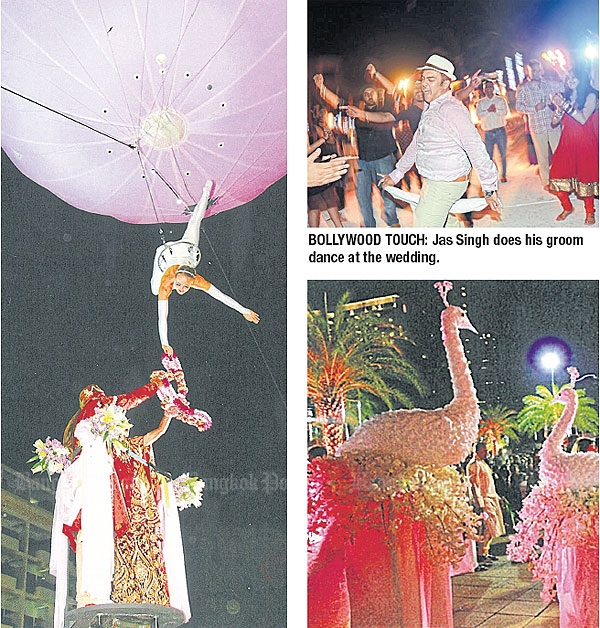