The persistent problem of sugarcane burning

Everyone in Dan Chang lives with plumes of smouldering fire that occur regularly when harvesting season starts in November and ends around April. (Photo by Prayong Srithong)

March and April are months of haze. The white-grey smoke may be just a seasonal nuisance that exists only in the northern and southern regions in Thailand, but in a sugar plantation in Dan Chang of Suphan Buri province, haze has long been a part of the people's daily lives and of the worrisome harvesting cycle. Villagers in Dan Chang get used to dry-coughing. Smoke hangs over the roofs of their houses and seeps indoors.

Everyone in this small farming district lives with plumes of smouldering fire that occur every year when the harvesting season begins in November and ends around April. It's not unusual for farmers to see their sugarcane plots gutted by fires set by unknown people, though, lately, a dissenting voice started to come from a couple, Raweewan and Payong Srithong, who moved there three years ago to do organic farming.

"Everyone seems to live with plumes of smoke, and tolerates inhaling dust-filled air and smog. There is one house where they've installed a window pane to protect from smoke. I wonder how they can tolerate the heat and lack of ventilation," says Raweewan, a 48-year-old housewife and owner of an organic farm. She also runs a not-for-profit promoting organic farming among ethnic Karen villagers.

Raweewan is not a native of Suphan Buri, though she has become sort of an honorary native after marrying Payong Srithong. The couple began organic farming shortly after receiving degrees from Thammasat University, and three years ago they returned to develop an organic farm on family land in Dan Chang, selling organic products such as rice, beetroot, fruits, vegetables and organic sugar products made freshly from a small sugarcane farm plot on the premises. Like other villagers, the small sugarcane plot last month was ravaged by a fire that spread from a nearby plantation.

"The smoke is so thick and dust hovers in the sky, then falls down like black snow," she laments.

Burning is a common problem in sugarcane plantations like those in Dan Chang, one of Thailand's major locations for sugarcane plantations. The area is dotted with sugar mills and factories, with the total sugarcane-plantation area equalling 18,000 rai. The plantation is larger than the eye can see, yet the expansive sky is rather foggy. Factories this year finished production season earlier, partly because of drought.

"You are lucky to come this time of year. Factories have started to close down their seasonal operations," Raweewan says. "If you visit the community between December and January, you'll be suffocated because sugarcane harvesters are working round the clock. In order to cut sugarcane faster and easier, workers chose to burn the sugar farms. 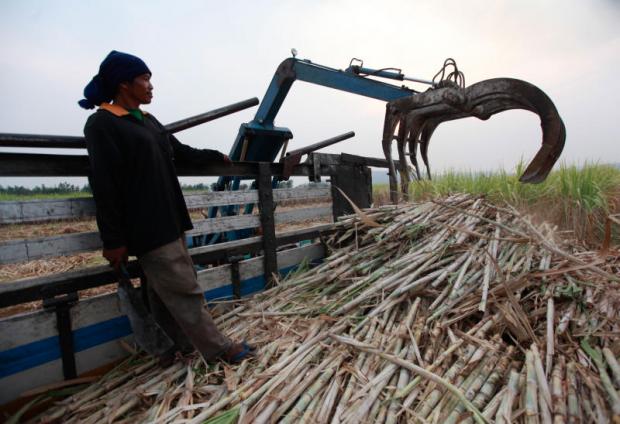 Burning sugarcane before cutting -- known as pre-harvest burning -- was not part of traditional sugarcane harvesting in Thailand. In the old days, harvesting was respected as skilled labour, a craft. Known as clean harvesting, people manually rid leaves from sugarcanes, and neatly pack sugarcanes into bundles before orderly loading those bundles into trucks. The process was time-consuming and back-breaking. Labourers had to tolerate insects, sore palms, and aching arms and hands.

Harvesting methods have changed as the sugar plantations have become big business on both the domestic and international markets. Cultivation requires coping with fast-paced production and higher orders from companies that trade sugar in commodity markets in London and New York. As a consequence, the sugar-plantation area increased while skilled harvesters retired, or even found lighter jobs, such as in construction. In Thailand, cheap labour from the Northeast has been brought to help harvest sugarcane during the past decade.

This new breed of labourers do not look at sugarcane harvesting as a craft. "They just want light work and quick cash and they prefer burnt sugarcane to fresh harvesting," says Surin Khanthong, a sugarcane farm owner. Like many local farm owners, Surin blames outsiders for setting fire to the plantations in order to reduce their workload. Foliage is burnt down, and plants are drier, making it more easy for cutting.

"These labourers enjoyed working on fire-gutted plantations. But for local land owners, it's a loss," says Surin. 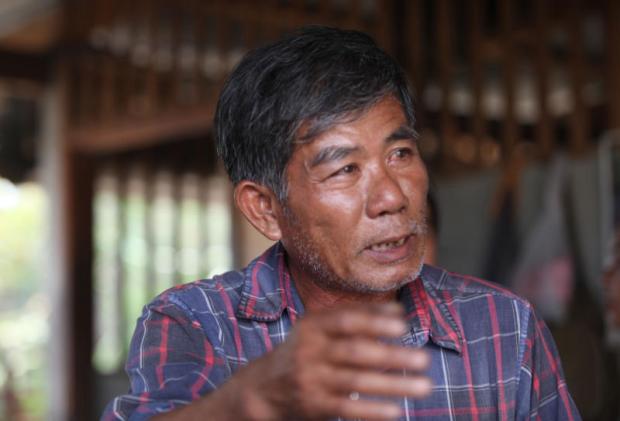 As with the other farm owners, his plot has been set on fire, and also like other owners, Surin had no choice but to hire workers to cut down the sugarcanes promptly. Burnt sugarcane stalks need to be cut down within a week, lest the liquid sucrose spoils.

Flames wipe out useful organic materials from leaves that will decompose and enrich the soil. Heat turns the plantation into barren land, requiring much more water to make the earth plantable again.

It takes nutrients from the soil, forcing farmers to use more chemical fertilisers and pest control, as insects and animals that help control the pests are killed by fire. Sugarcane farmers in Dan Chang are not alone in facing this problem. Pre-harvest burning has become common practise across the country. According to an article by the Department of Agriculture's Nakhon Sawan Field Crop Research Centre in 2011, the percentage of pre-harvest burning keeps rising. The problem isn't only in Thailand, but throughout the world. In the US state of Florida, law still permits pre-harvest burning, and the respected conservation group the Sierra Club is trying to pressure the state to reign in the burning. 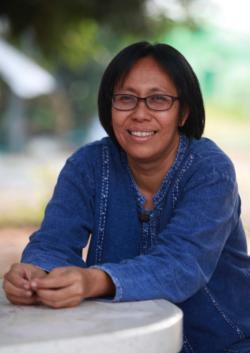 Brazil and Australia have banned burning. In Thailand, the authorities acknowledge the problem and have introduced measures to persuade growers and suppliers to go for fresh harvest. The Office of Cane and Sugar Board (OCSB), the state agency overseeing the industry, has required factories to pay a premium for freshly cut product, which can fetch 15 baht per 100 stalks, and 8 baht per burnt stalk. Factories prefer freshly cut cane stalks too, as the sucrose will not condense and disrupt the machines.

"The burning, whether intentional or accidental, becomes part of the production system. It helps speed raw material into the production line," says Chainarong Sretthachua, a lecturer on sociology and anthropology at Mahasarakham University. "The problem is also the dark side of the quota system in the Thai sugar industry. Middle men and growers will get a quota from manufacturers, and they will be fined if they fail to meet the quota order. The market has been driven by high demand and tight deadlines. Sometimes, middle men need their supply more quickly; thus, pre-harvest burning is used as a tactic that forces land owners to sell their sugarcane stalks right away.

"Pre-harvest burning will pressure farmers to sell the products. It's known among sugarcane farmers that trucks will wait right in front of a burnt sugar farm because there will be quick sugarcane cutting."

Not all factories want to buy burnt sugarcane. Still, the sight of lorries loaded with charred sugarcane is a common scene in Dan Chang.

An employee at a sugar-processing factory reveals that when they need to meet quota and demand, "we will take in any sugarcane stalks, freshly cut or burnt". At present, purchasing burnt sugarcane stalks is not illegal, but the pre-harvesting burning is a criminal offence that can carry a minimum penalty of two years' imprisonment and a 14,000 baht fine.

The local police station acknowledges the problem but cannot arrest wrongdoers, because the arson takes place at night. Setting fire in the farms is simple, requiring just a cigarette butt or a matchstick and drops of gasoline. The Pollution Control Department (PCD), which has been active in controlling the haze in the North and the South, cannot do much.

"Compared to air pollution from coal-fired power plants or factories in Map Ta Phut, air pollution from sugarcane areas is less serious. The dust particles that will be dissipated quickly in open air and strong wind in farm areas. Local people just accept it because it's part of their life," says an official who asked not to be named. "The problem is not on the media's radar, partly because the area is open and windy, and the haze is quickly swept out."

Despite living with the smoke -- despite the coughing that everyone in the village seems to suffer from -- there have been no lawsuits or official complaints. There are no air quality monitoring stations because no one has bothered to ask the authorities to provide them. 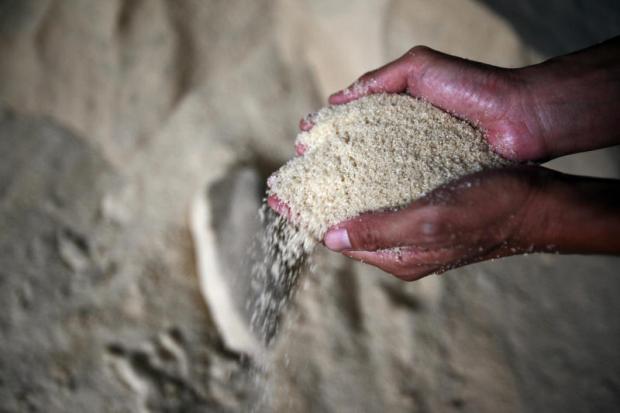 Thailand is the world's second-highest exporter of sugar products.

Raweewan does not know how long she has to live with the problem. "Villagers only know fire and smog will come back again by the end of this year and certainly will return next year and years after."

The scene of a smouldering sugarcane farm might contradict the soft, nice image of the sugar industry. Sugar has been hailed as the most regulated farm product in Thailand. It looks harmless, and many companies put environmentally-friendly labels on their packages.

"Sugar is sweet, especially when you are a consumer. But if you live in this community, your perception of it might be a bit different. The taste of the experience is not sweet at all."