A 57-year-old Chiang Mai woman was charged with inciting rebellion last week for posting a photo of herself with a red plastic bowl on Facebook. The bowl, to sprinkle people with water during Songkran, also happened to carry a message from fugitive former prime minister Thaksin Shinawatra. She faces the prospect of up to seven years’ jail if convicted of sedition.

To highlight the social 'no-nos' that may threaten the peace brought to the country since the coup, Spectrum is publishing a reminder of unsavory activities frowned upon since May 2014. 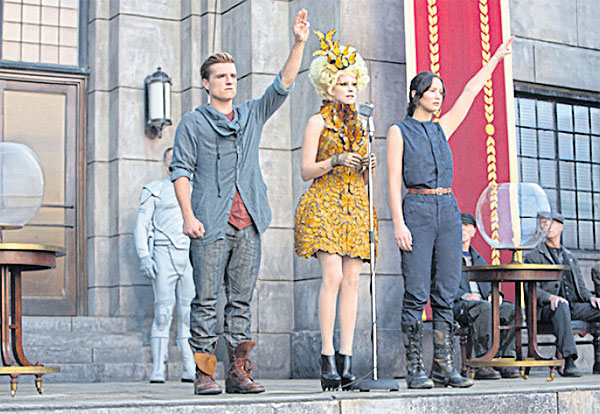 In November 2014, five Khon Kaen students were hauled off for “attitude adjustment” after performing the three-finger salute in front of the prime minister.

The symbol of defiance has been popularised by the Hunger Games franchise and became a symbol of resistance for demonstrators angered by the toppling of the Yingluck Shinawatra government on May 22, 2014.

Shortly after the arrests, Hunger Games director Francis Lawrence said he was “troubled” by the arrest of anti-coup activists in Thailand for emulating the symbol.

“When people are getting arrested for doing something from your movie, it’s troubling,” he said.

The gesture is used in the films, which are based on a series of novels by Suzanne Collins, as a show of defiance against the corrupt, authoritarian regime which rules over the fictional state of Panem. 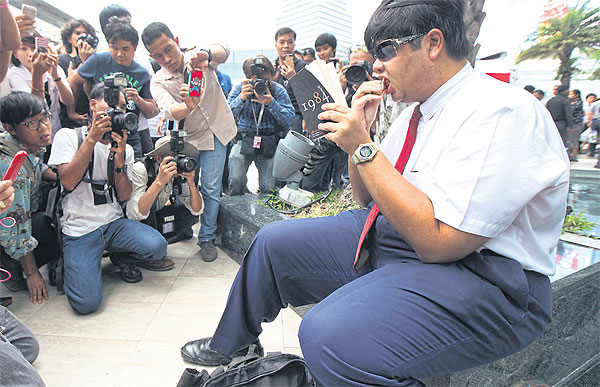 THE EMPIRE BITES BACK: A student activist was detained after munching on sandwiches and reading George Orwell’s ‘1984’ outside Siam Paragon in a symbolic protest against the coup.

2. Read a book and eat a sandwich in public

A student was arrested after he ate a sandwich while holding George Orwell’s 1984 in front of Siam Paragon shopping mall.

The novel, which eerily predicted how totalitarian states would control the population and mass media, gave us the phrases “thought police” and “Big Brother”.

Sandwich-eating protests and reading 1984 gained popularity during the early months following the coup, and the activists would sit in groups of four after the military banned gatherings of five or more people.

A plan to screen the movie 1984 at an art gallery in Chiang Mai was also cancelled, with Bodin Theparat, a film critic and founder of Panya Movie Club, spending an hour at a military base where he was told to avoid screening films or artistic projects that could provoke political conflict. 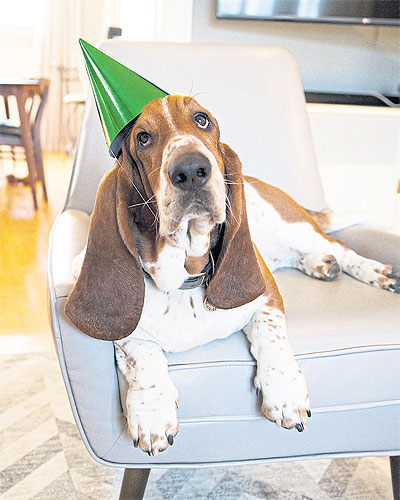 Factory worker Thanakorn Siripaiboon was charged by a military court in December last year under the lese majeste law. Mr Thanakorn allegedly made sarcastic comments about HM the King’s favourite royal pet dog, Khun Thong Daeng, which died on Dec 26. Thong Daeng — mother of a litter of nine — was once a stray, before being picked up by a doctor in 2009. After being presented to the King, she became his favourite pet.

The local printer of the International New York Times Thailand edition removed a 618-word article on the dog, instead leaving a blank space on an inside page where the story should have appeared. It was the fourth time content had been removed from the internationally respected newspaper in three months.

Under the lese majeste law, a conviction for insulting the King, Queen, heir or regent carries a prison term of up to 15 years. 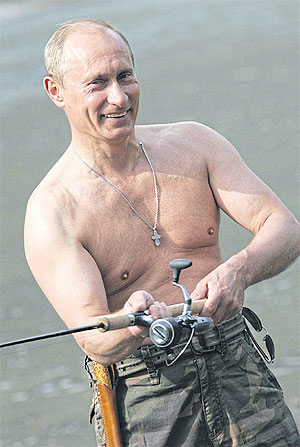 FISHING FOR COMPLIMENTS: Vladimir Putin issued a 2016 calendar, but we don’t have a copy.

4. Own a calendar of politicians

The controversy started after Roi Et governor Anusorn Kaewkanwal issued an order prohibiting the distribution of Thaksin-Yingluck New Year calendars during official functions. About 200 copies of the calendars were given out on Dec 30 last year, while 5,000 were passed out in Chiang Mai. The Pheu Thai Party said about 300,000 were printed for party members to give to their supporters.

Mr Anusorn told 20 district chiefs in the province to tell their staff not to hand out the calendars to the public as it could cause political rifts and lead to questions about their political partiality. A few days later, Gen Prayut voiced support for the ban, saying the calendars were inappropriate.

Observers say the government is concerned the calendars could serve to rally support for the former premiers and help reignite political conflict. 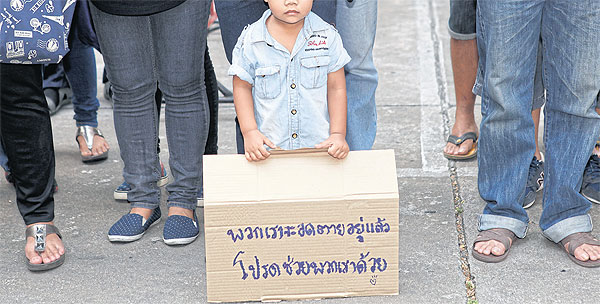 DOES HE COUNT AS FIVE?: Vendors complaining about City Hall’s plan to evict them from areas they have long used for trading are among those whose protests have been disbanded.

Police last month shut down a gathering of environmental activists and local communities affected by controversial development projects, citing the NCPO’s ban on political assembly of five people or more.

The activists, who say they had no political agenda, were pushing for the prime minister to revoke regulations which would speed up plans to establish industrial estates and build power plants.

On Wednesday, a resident in tambon Chiang Rak Yai who led protests of the planned construction of a waste-fired power plant was summoned by the military for “attitude adjustment”.

Even the Democrat Party has asked the NCPO to relax the meeting ban so it can get its executives together and pass resolutions necessary for the party’s internal management.

But no luck so far. IF THE SHIRT’S RED, DON’T WEAR IT: The squid vendor went topless after military intervention.

6. Sell squid in an inappropriate T-shirt

A few days after the coup, a fried squid vendor in Chiang Mai’s Muang district was ordered to take off his red T-shirt which bore a picture of red shirt leader Jatuporn Prompan, according to Prachatai. The incident was posted on Facebook by Krisana Pumson, a former MP for Tak province.

According to Prachatai, five military officers arrived in a Humvee and ordered the man to take off his T-shirt, claiming that it was against martial law. After a heated exchange, the man eventually took off his T-shirt without having another one to change into. The five officers confiscated the T-shirt. 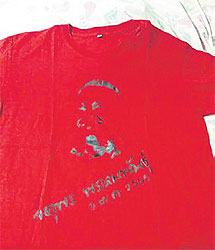 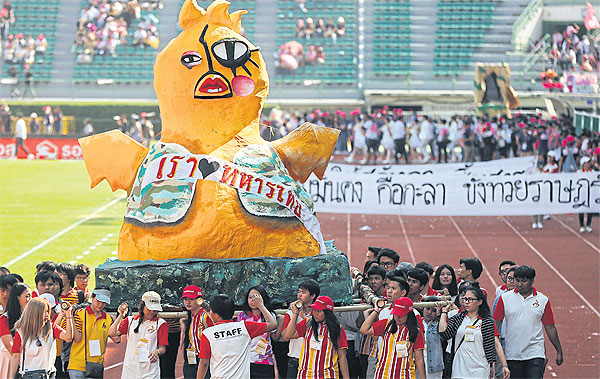 FLOATING CRITICISM: Some banners were banned from the Chula-Thammasat football match, but this float reading ‘We love the Thai military’ passed.

7. Be a mischievous student

Political satire is the highlight of the traditional football match between Chulalongkorn and Thammasat universities, where students make fun of politics in the form of floats, banners and flash-card displays.

Last year’s event proceeded with some glitches when authorities shut a gate at the National Stadium to prevent the Thammasat parade from entering the ground, deeming many banners politically sensitive.

Dissent was on show during the parade this year, when several students appeared locked up in mock cages and chains, several made up to look injured.

Cloth banners posing the question “Why do we need the military?” were taken away at the “single gateway” through which all parade processions had to pass.

The Aug 7 referendum will be the country’s first return to the ballot box since the coup, which followed months of political unrest. Around 51 million people have the right to vote, according to the Election Commission, which also predicted an 80% turnout.

While critics say they will boycott the August vote, there is concern over “ambiguous wording” in the Referendum Act, particularly a phrase in Section 62 that broadly prohibits “acts instigating unrest and interrupting the referendum”.

The military junta already discourages serious debate on the charter, with several panel discussions prevented from being held. 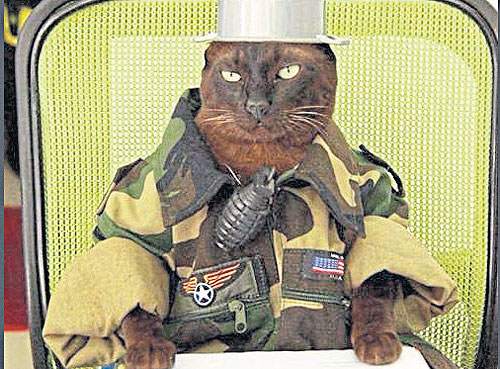 9. Dress up a cat in a military uniform

On the day of the coup, police and military personnel paid a visit to Kriangkai Suetrong’s home after he posted pictures of his cat Johnny dressed in a military uniform. In one photo Johnny, wearing sunglasses, poses in front of a TV screen carrying the logos of the coup-makers and in another he is perched on a mocked-up tank, Louis Vuitton bag dangling from the barrel of the fake gun.

The Facebook account of “Johnny the Suphalak Cat” — who according to local media is one of the 12 most famous cats in the world — currently has more than 400,000 “Likes”.

Pol Maj Gen Yutthana Thongpan, a local police commander, said the military and police search of Mr Kriangkai’s home was not to intimidate him, but part of a sweep in the area for illegal weapons. He added Mr Kriangkai’s name was merely on a list and he had fully cooperated with the search. 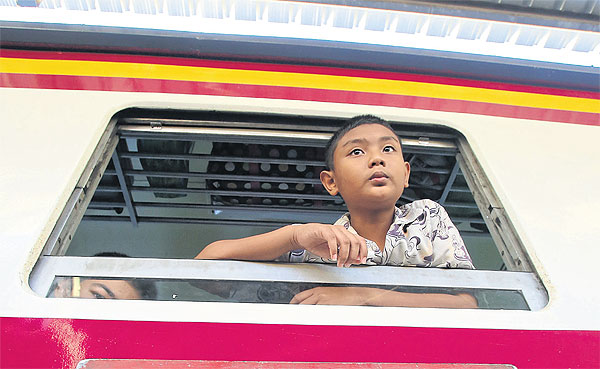 WHERE ARE YOU OFF TO, SON?: The military might be keen to kick-start the economy with rail projects, but rides for unauthorised political activities are not so welcome.

In December, 11 students and activists were barred from travelling to Rajabhakti Park in Hua Hin district of Prachuap Khiri Khan. They were intercepted on their way to the park, after police and soldiers stormed their train carriage at a railway station in Ratchaburi province. The group were on their way to the park to call for an investigation into alleged corruption at the billion-baht monument to seven great Thai kings. They were charged with illegal assembly.

Three military-run “investigations” of the military-run project determined that payments made by foundries in order to get the casting contracts were neither under-the-table payments nor commissions, but rather “charges for recommending jobs”.