Bean there, drunk that

The lush coffee bean cherries are hand-picked before being fed to the e-hen.

High up in the scenic altitude of Doi Tung, staff at a wildlife breeding centre are producing one of the world's most prized coffees from the excrement of furry, four-legged animals.

With expertise in animal breeding, several employees at the centre, located in Chiang Rai's Mae Fa Luang district, have turned to a side job to make extra money. They use the Asian palm civet (e-hen in Thai), with the end-result being first-rate coffee beans noted for their unique taste and aroma.

The beans are packed and labelled "Civet [chamot] Coffee".

Klinsak Pitiwong, head of the centre who initiated the project four years ago, said money from coffee bean sales is helping to wean his staff off the temptation to engage in legally questionable side jobs to supplement their family income.

Mr Klinsak said his employees at the centre grow fine Arabica coffee, which requires cultivation at an altitude of more than 700 metres above sea level and constantly low temperatures, under the Doi Tung Development Project. Therefore, the staff are experienced and skilled in both animal breeding and coffee cultivation.

However, even though coffee beans produced by the centre will be branded as civet or chamot coffee, the animals which eat and discharge the beans are the e-hen, not the chamot.

"Chamots don't eat coffee beans, but the e-hen do. However, our marketing experts suggested we go for the word 'chamot' because Thai people are more familiar with chamot than e-hen," he said. Chamot also sounds more pleasant to the ear. 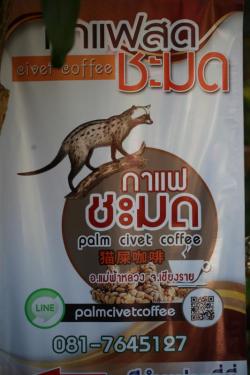 The coffee produced by the wildlife breeding centre is marketed under the chamot brand.

In Thailand, e-hen are not on the list of protected species. Therefore, Mr Klinsak saw the opportunity to use these cat-sized mammals and make money.

With a distinctive and pleasant taste, coffee beans obtained from e-hens now fetch a whopping 20,000 baht a kilogramme, compared to normal beans which sell for around 1,000 baht/kg.

"We normally feed them the cherries within two hours of the beans being harvested, to prevent glucose in the yield from turning rancid, which helps maintain the quality of the coffee," he said.

The e-hen digestive system reacts chemically to the coffee cherries and enhances the taste in the beans, bringing out the full flavour. The staff look for the e-hen droppings and pick out the beans for the subsequent stages of processing.

On the cleanliness and hygiene of the coffee beans, Mr Klinsak said those obtained from farmed e-hen are cleaner with less chance of being tainted by bacteria than those produced by e-hen in the wild.

Harmful bacteria in wild e-hens may come from shellfish and insects that the animals feed on.

Coffee beans separated from the droppings are left in the sun to dry five times. Alternatively, they are put in a dryer and sterilised.

Next, the beans are left to mature in an ageing process, which takes about six months, before they are hulled and kept in a dark vacuum storage with the temperature under 18 degrees Celsius.

Mr Klinsak said the product marketed as chamot coffee from Doi Tung is registered as Geographical Indication (GI) merchandise by the European Union to ensure the integrity of the product. It guarantees the coffee is acceptable for global commerce.

When the fledgling coffee project took off in 2012, he started small-scale production with two e-hen, which gave high-quality coffee beans. 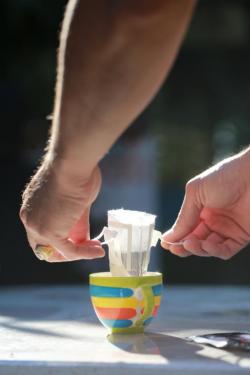 A coffee aficionado takes great care over a cup of chamot.

The product instantly generated profits so he decided to procure three more e-hen.

Today, the centre has bred close to 20 e-hen.

Mr Klinsak said raising e-hen is not complicated. They are fed two meals a day. The feed -- which is made up of fruits, mainly gluay namwa banana, with an added raw egg -- is given to e-hen in the morning while coffee cherries are fed in the evening.

But he said production is not without obstacles as each e-hen consumes coffee in different quantities, depending on the weather conditions.

In cold weather, they will eat less cherries than usual. Some e-hen eat only 100 grammes of coffee cherries while others take in more than 500 grammes. On some days, the e-hen don't touch their food at all.

Palm civets reach maturity at two years of age. The mating season occurs twice a year while their gestation period is about two months. They give birth to three to five babies each time.

The expense of breeding and raising the e-hen comes to about 10 baht a day, or no more than 5,000 baht a year. It is a worthwhile investment with high returns, he said.

Despite the relative lack of complications in raising the mammals, Mr Klinsak refuses to let each member of staff take care of too many e-hen, as it could hurt the quality of the coffee beans.

Reflecting on his efforts to date, he said the chamot coffee trade could do with more marketing and promotion in Thailand. Doi Tung chamot coffee is retailed as ground coffee. The beans are also sold in small, individual packs, priced at 299 baht each, suitable for making a single coffee shot. The centre wants to establish a niche in the tourism market in Chiang Rai, Chiang Mai and Phangnga.

Despite the steep price tag for Doi Tung chamot coffee, Mr Klinsak said it is much cheaper than other exclusive coffees on the shelves. Retail prices are dictated by investment and manufacturing costs.

"Today, with the capacity and resources that we have, we are able to produce about 50 kilogrammes of chamot coffee each year. However, we need more distributors to expand our market across the country because we believe we have the capability to beef up our product volume," he said.

Besides coffee, Mr Klinsak said the palm civets, which have been fed cherries and are experienced bean "dischargers", can be sold for more than 3,000 baht each. The e-hens which are raised as pets can command a price of 5,000 baht each.

Somchai Aphimongkolrat, an employee at the centre who helps to run the palm civet farm, said the secret to a delectable chamot coffee is in the fine strain of Arabica coffee typically grown on Doi Tung, and healthy e-hens. 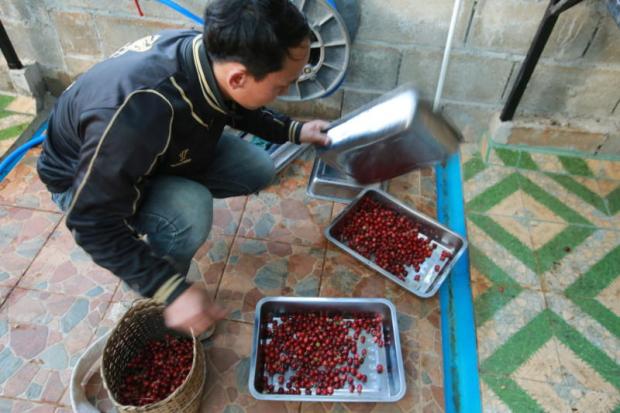 A worker cleans coffee bean cherries after picking them. The cherries are fed to the e-hen in the afternoon. 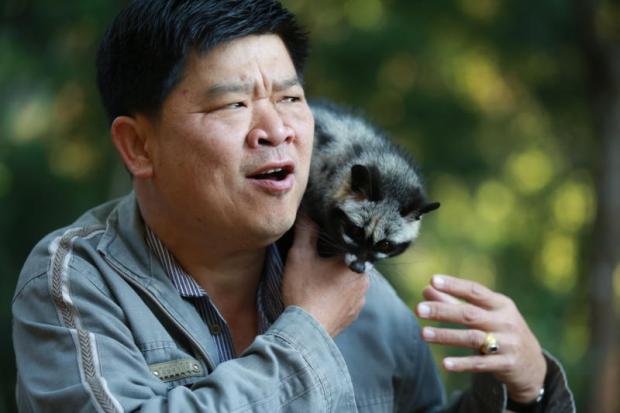 An e-hen raised at the breeding centre plays with one of the staff. photos by Chamlong Boonsong 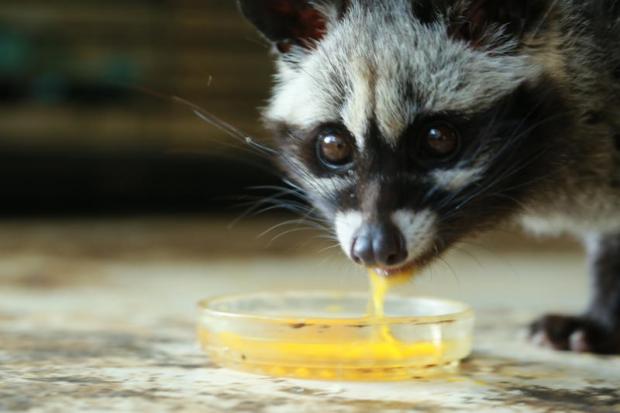 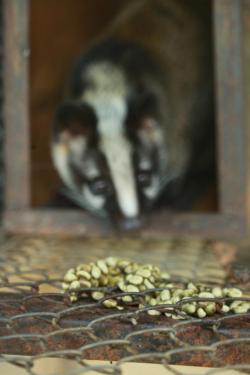 The prized coffee beans are collected after being excreted by the Asian palm civet (e-hen) at Doi Tung wildlife breeding centre.