A natural paradise of Japan
Travel

A natural paradise of Japan

Covering approximately 9,187km² and spanning 600km from north to south (from the mainland to Yoronijima Island), Kagoshima is the 10th-largest of all 47 prefectures in Japan. From west to east, there are numerous islands. The climate conditions vary from the snow-capped Isa City to the tropical-like Amami Island. Flora and fauna are abundant there. 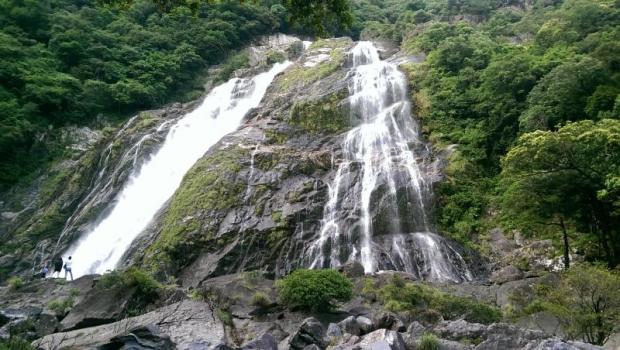 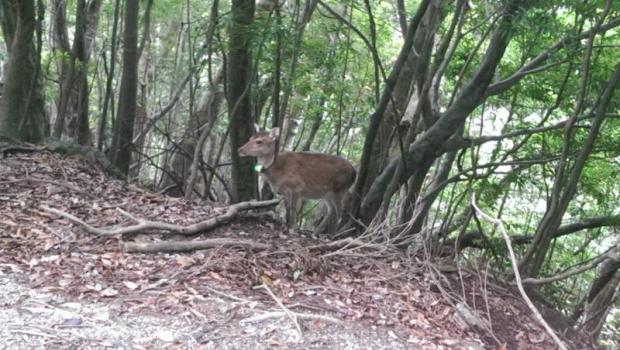 Yakushima is an island in the south of Osumi Peninsula in Kagoshima prefecture. It has an area of about 504km². It is called "The Alps on the Ocean" for having many mountains over 1,000m high, including Mt Miyanoura-dake (1,935m above sea level), the highest in Kyushu. One-fifth of the island was declared a Natural World Heritage Site by Unesco in 1993. The change of temperatures at different altitudes and the abundance of water and rain cause the existence of plants from both subtropical and cold temperate zones there. The most commonly seen animals are the Yaku monkey and Yaku deer. There are numerous waterfalls on this island, including the 88m-high Ohko-no-taki waterfall, one of Japan's top 100 falls, and Senpiro-no-taki waterfall. Travel by ferry from Kagoshima to Yakushima takes about two hours. The fare is 14,000 yen per head per return trip. To travel on this island, take a hop-on/hop-off bus which departs hourly and operates daily, 7am-6.30pm. A one-day pass costs 2,000 yen, a two-day or three-day pass 3,000 yen, and a four-day pass 4,000 yen.

If you look at a map of Japan, you'll see Kagoshima on the left corner or in the southernmost part of Kyushu. As a southern gateway to Japan, Kagoshima has been in contact with several Southeast Asian countries for ages, as well as Ryukyu Island, China and Korea since the 16th century. It rapidly absorbed Western culture and technology, including Christianity and gun-making.

The capital of Kagoshima prefecture is also called Kagoshima. It is often compared to its Italian sister city Naples, due to a similarly mild climate and palm-tree-lined streets. Kagoshima is full of energy due to the vibe of the ocean-embraced city and the friendliness of those who live happily there amid nature.

Its Sakurajima area has an active volcano, observation points and footbath spas for visitors to explore. The island of Yakushima, 20% of which is a Unesco World Natural Heritage site, is also a must-see.

Kagoshima has numerous attractions due to its beautiful nature and diverse culture. In the city alone, there are roughly 40 interesting attractions and about 270 hot spring sources, and many public bathhouses offer hot springs, according to the official guidebook of Kagoshima city.

Hidemitsu Narasako, director-general of the Kagoshima Prefectural Visitors Bureau, said: "Kagoshima is a unique place with things like volcanoes, sea and sand. Thailand is nearer to it than to Tokyo and other places in Japan. Kagoshima has two Unesco World Heritage sites [Yakushima Island, and the Sengan-en Garden and Shoko Shuseikan]. It has nature, culture and food. It's the only source of natural sand baths in Japan -- all others are artificial." 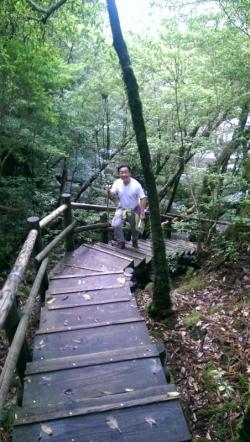 On Yakushima Island, a must-do is hiking the Shiratani Unsuikyou Ravine covering 424 hectares of forest, 600-1,300m above sea level. The forest is covered in ferns and mosses and full of Yakusugi cedar trees and laurels. There are three trails, including the most popular, Taikoiwa Rock Course, which requires four hours of hiking to the Taikoiwa Rock, a moss-covered forest that inspired the animated film Princess Mononoke. Visit y-rekumori.com.

According to him, the top-five countries whose tourists annually visit Kagoshima are Taiwan, Hong Kong, Korea, China and Singapore. Thailand comes sixth. Each year, 470,000 foreign tourists and 7 million Japanese people visit this prefecture to see volcanoes, beaches, nature and the two world heritage sites as well as to visit the Tanegashima Space Centre, where there are about 20 rocket launches each year.

According to the official guidebook of Kagoshima city, Kinko Bay is home to a wide range of marine animals, including dolphins. From Marine Port Kagoshima, south of the city, visitors can enjoy the stunning views of the nearby Sakurajima area.

If you're lucky, you'll be able to see dolphins swimming in the bay while travelling on ferries between the city port and Sakurajima. However, you can see dolphins and many other kinds of marine creatures at Io World Kagoshima City Aquarium.

Yet nature lovers may want to see wildlife and marine animals living in their own habitats, rather than in zoos and aquariums. Thus, the perfect place to visit is Yakushima Island. All along the routes past the forests, you'll see a lot of monkeys and deer sitting or strolling calmly. On Nagata beach, you'll be mesmerised by the nesting of sea turtles. Trekking and hiking at Shiratani Unsuikyo, the island's natural recreation forest, allows visitors to see millennia-old cedar trees, many other kinds of plants, and beautiful waterfalls. Another must-see is Yakusugi Museum, amid the island's cedar trees.

After a few long and tiring days of strolling or hiking, tourists may want to rest and relax. Kagoshima is well-known for hot springs and hot sands due to the warmth of the active volcano.

Only a 15-minute ferry ride from Kagoshima city, tourists will reach the Sakurajima area named after Sakurajima volcano, one of the world's most active volcanoes. There, they can pamper themselves by soaking their legs in a hot spring at Sakurajima Yogan Nagisa Park Foot Bath. If a foot bath is not enough, tourists should head to Ibusuki for the famous sand-bathing and onsen-bathing experiences.

Kagoshima is also a food paradise with many famous dishes ranging from kurobuta pork to sweet potatoes. 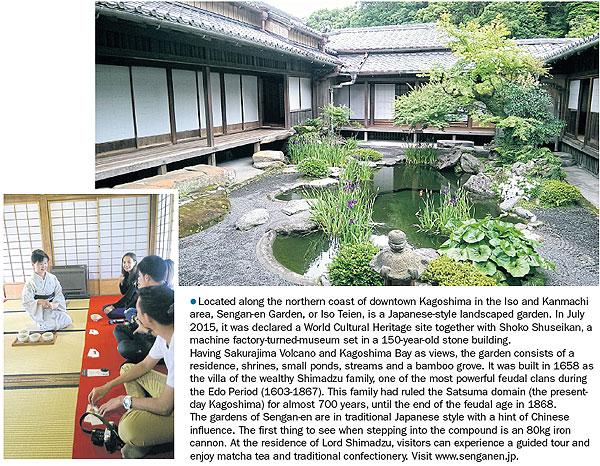 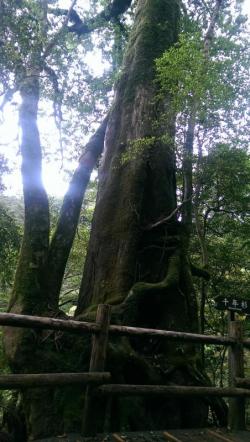 Yakusugi Museum tells the stories of the cedar forests in Yakushima. Yakushima is covered by extensive cedar forests that contain some of Japan’s oldest living trees.
The Japanese affectionately call cedar trees more than 1,000 years old “yakusugi”. In 1996, a cedar believed to be 2,170-7,200 years old and the largest and the oldest in the world was discovered there and called Jomon Sugi.
The island’s cedar forests were logged in the past, especially during the Edo Period, for the production of cedar roof tiles and wooden plates. Logging was halted in the 1970s. Today, the forests have well recovered and become a national park.
Visit yakusugi-museum.com. 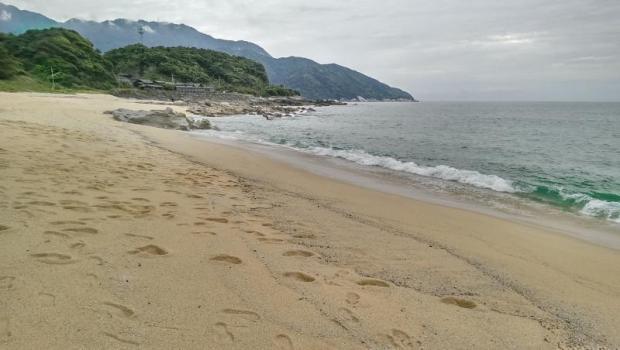 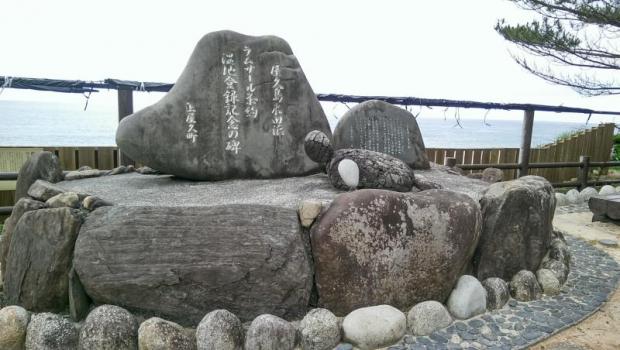 Inaka beach is a 1km stretch of the beautiful sandy Nagata beach near the Okudake Mountains of Yakushima. It is Japan's top sea turtle nesting site. Between May and July, during the nesting period, more than 20 sea turtles can be seen laying eggs there each night. 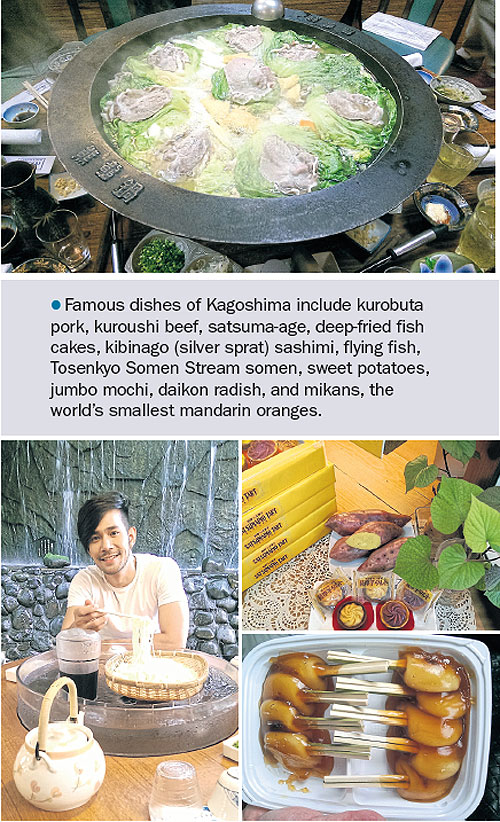 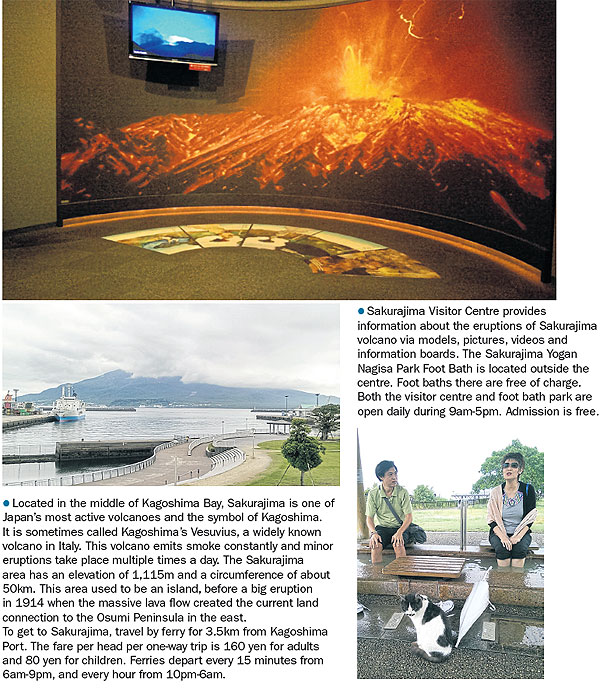 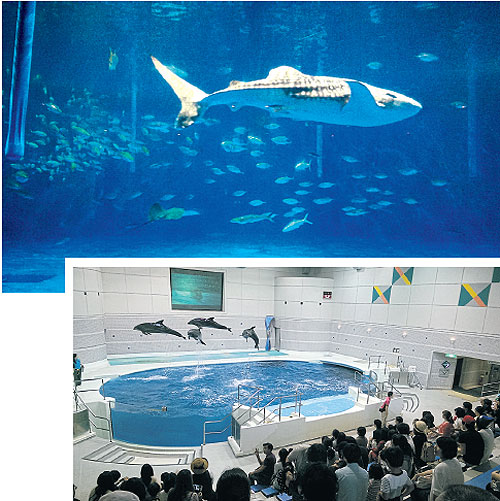 Io World Kagoshima City Aquarium is one of Kyushu’s largest aquariums, with around 30,000 marine animals of 500 kinds. In the Kuroshio Great Water Tank, large fish — including, a whale shark, bonito, tuna and rays — swim. Another must-see is the dolphin performance both inside and in front of the aquarium. Three times a day, a number of dolphins swim out from their pool into the Dolphin Waterway, a part of the open ocean. Visit www.ioworld.jp. 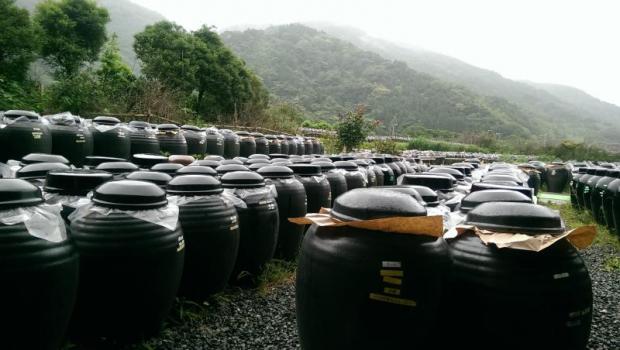 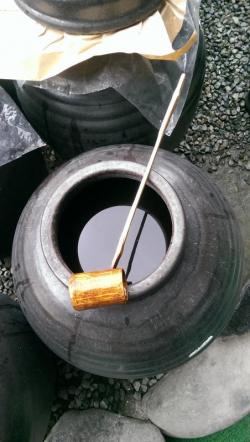 Kakuida Black Vinegar Factory in Fukuyama Town is where the natural production of kurozu, black vinegar, from unpolished rice under the tsubo-dzukuri (preserving in jars) method has been passed down and implemented for over two centuries. The method is unique, and this kind of black vinegar has several health benefits. 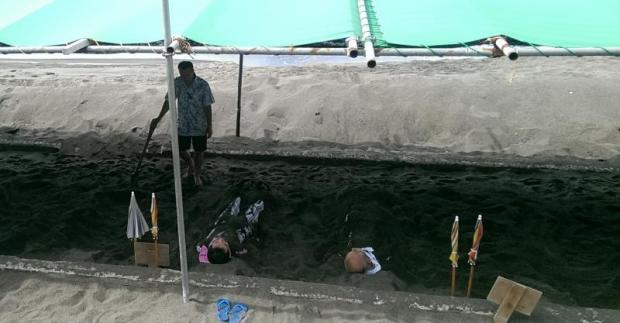 Ibusuki town is famous for sand and onsen baths. To sand bathe, visitors lie down on the hot sandy ground and are covered in hot sand for 10-15 minutes. Among recommended sand-bathing venues are the Ibusuki Iwasaki Hotel and the Yamagawa Sand Steam Bath. Onsen lovers will surely enjoy the Tamatebako Open-air Hotspring, from which visitors can enjoy panoramic views of Sakurajima volcano and the sea.