International tourist arrivals during the third quarter will grow 14% from the same period of last year although it is the low season. 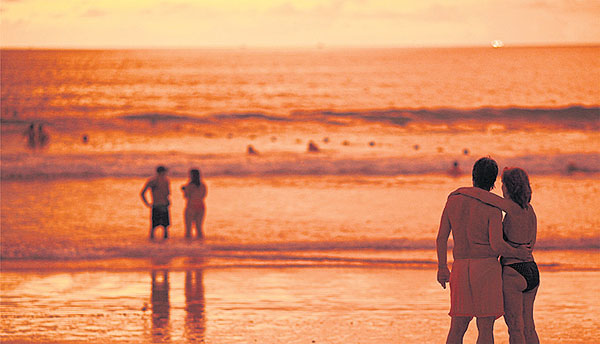 Tourists relax on Phuket’s Patong Beach. The soaring Chinese tourist market is the main driver of Thai tourism this year.

According to the Tourism Authority of Thailand (TAT) Governor Yuthasak Supasorn, the total number of international tourists from July to September will reach 8.3 million people.

TAT also forecasts that the domestic tourism will grow 4% and reach 36 million trips during the third quarter. Both domestic and international tourists will generate 635 billion baht revenue, up 14% from the previous year.

The reasons for the positive forecast include an increase of flight bookings to Thailand in particular for long-haul markets, including the United States, Europe and Africa. The launch of new direct flights are Bangkok-Tehran in Iran, Bangkok-Danang in Vietnam and new flights from China's secondary cities such as Chengdu and Chongqing to Thailand.

Moreover, TAT will launch a series of tourism campaigns to attract visitors such as the Amazing Thailand Grand Sale, launched this month, and the Women's Journey in August.

According to Thai Hotels Association president Supawan Tanomkieatipume, hotel room occupancy will reach 85% during the third quarter. If divided by region, the South will have the highest occupancy, especially Phuket, followed by the North and Bangkok.

"Although the third quarter is the green season, the occupancy rate will be as high as the first quarter. One reasons is because of the MICE [Meetings, Incentives, Conferences and Events] market," she said.

For the first two quarters, Thailand welcomed 16.67 million international visitors, up 13% over the same period of 2015, generating 824 billion baht, up 17%.

Domestic travellers, on the other hand, made over 75 million trips, up 4% over the first half of 2015, generating revenue about 416 billion baht.

Called "Thailand Sustainable Tourism Awards 2016", the competition is open to people between the ages of 15-35. You can apply individually or in a group of three. Each team must produce a two-minute video clip telling stories about slow travel and Thainess.

Last day for submission is July 15.

The film which gets the most Likes on Dasta's YouTube channel (www.youtube.com/user/Dastachannel) during July 15-22 will go into the final round. A panel will select another five teams for the final stage. The six finalists will join a workshop with Dasta at Unesco's World Heritage sites in Sukhothai, Kampaeng Phet and Si Satchanalai. The winning team will receive a cash prize of 100,000 baht. The award ceremony will be held on Aug 18.

Japan Airlines (JAL) has launched its fully revamped Boeing 777-200ERs on the international flights between Haneda and Bangkok. Called JAL Sky Suite 777 (SS2), the aircraft will provide 236 seats in total, lesser than the previous aircraft which provided a total of 245 and 312 seats depending on seat designs.

Business Class now comes with fully-flat seats for 42 passengers, while Premium Economy Class will have 40 seats. The economy class features 154 seats, offering about 10cm more legroom than the previous design. JAL plans to launch the JAL Sky Suite 777 (SS2) on the Haneda-Singapore route in August, with plans for further expansion to the Honolulu routes from January 2017.

Bangkok Airways has launched a photo contest to celebrate its 48th anniversary.

Called "Share Your Magic Moments", the competition is open to anyone to send their pictures with 150 words describing an impression or inspiration of the photo. The pictures must be taken at one of the airline's destinations such as Sukhothai, Maldives or Luang Prabang.

"To mark the anniversary, we have come up with the idea for our passengers to share their experiences and moments with us through this campaign," said airline president Puttipong Prasarttong-Osoth. Twelve finalists will be selected to participate in a street photography workshop with Chaiyasith Junjuerdee, one of Thailand's top photographers. They will travel to Danang in central Vietnam, Sukhothai and Koh Samui.

The winning prize is 100,000 baht cash for each destination workshop. The last day for submission is tomorrow.

Minor Hotels Group will take over the management of the five-star Mövenpick Hotel Deira in Dubai on July 1.

The property will be rebranded as the Avani Deira Dubai Hotel. The hotel offers 216 rooms and suites with space usage of 35m² to 75m², seven meeting rooms, two restaurants and one lounge, a rooftop swimming pool and fitness centre. The hotel is about 4km from Dubai International Airport.

The hotel will provide 300 rooms and suites for both short and long-stay business travellers. It will be in a new mixed-used project called Origin District, which will comprise residential towers and a shopping mall.

Other facilities of the new hotel will include a restaurant, swimming pool, lobby lounge, a fitness centre and five meeting rooms.

"Over the years, Siracha has developed into a leading industrial estate and economic zone in the Eastern Seaboard. We are delighted to partner with Origin Property to bring our Holiday Inn brand into Siracha," said IHG vice-president for Southeast Asia and Korea Leanne Harwood.