To celebrate the start of Buddhist Lent on July 20, Buddhists nationwide have organised ceremonies which mirror their faith and local traditions. 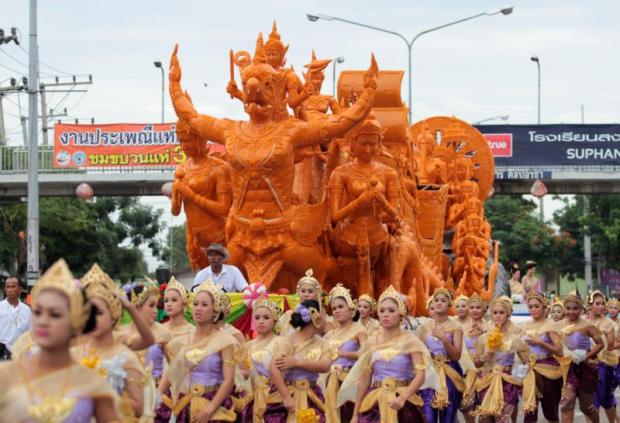 Khao Phansa Day (the first day of the lent) falls on one day after Asarnha Bucha Day, the Full Moon day of the eighth lunar month. During the three-month lent, monks must stay at their temples and strictly observe dhamma while Buddhists make merit by presenting saffron robes and candles to monks. Candles are lit all day all night throughout during this period to provide light for monks to pray and study at night. Here are some of the celebrations this year.

Suphan Buri: From July 19-21, lent candle processions and celebrations will be held in various venues in Muang district.

At Wat Pa Leilai, the spectacular parades of lent candles and the carving and decoration of candles by local villagers will reflect the local way of life in Suphan Buri. The lent candles will be carved beautifully and depict the province's outstanding historic sites, antiques, ethnic people's lifestyles and major tourist attractions.

On July 20 starting from 8am, there will be an opening ceremony at the 1st Highways Regional Office with the grandeur of lent processions, candle and procession contests, dances and other performances. The parades will finally reach Wat Pa Leilai for merit-making.

Nonthaburi: The ceremonies in Bang Kruai district are annually held during a longer period of time than other provinces starting from the moulding of lent candles last weekend to the procession the coming Saturday. The objectives are to revive and conserve Buddhist tradition and promote tourism by boat.

For centuries, people in Bang Kruai annually took lent candles to all 49 temples by boat and sometimes on foot in spectacular processions past beautifully decorated houses. Sometimes, people from the waterside houses would join the processions. On these boats, the villagers would sing a kind of local song called sakkawa and perform dances.

This year, the candles which were made last weekend will be celebrated today from 5-6.30pm at Wat Chalor. There will be entertainment and the display of finely decorated boat processions.

On Saturday, the boat processions of lent candles from several places in Nonthaburi will be launched at 9am from the pier of Wat Ket. All the boats are due to reach the pier of Wat Bot Bon at 11am. Once the candles have been placed in provided areas, local performances from Tambon Plai Bang Municipality, such as long drum dances, and water boxing and boat paddling contests, will begin. After the presentation of rewards to the winner of the boat decoration, the candles will be bestowed to the temple.

From July 17-19, the "Days Of Fruits And Prized Products Of Thong Pha Phum District Fair" will be held from 9am-9pm around the helipad of Vajiralongkorn Dam, Kanchanaburi province. The aim is to promote famous fruits and tourism in Thong Pha Phum district.

At the fair, fruits grown in the district, such as rambutan, durian, pineapple, mangosteen, bananas and longkong, will be sold along with organic vegetables, local plants and popular local products. There will also be fruit parades and contests as well as a light and sound show.