A special kind of blue
Travel

A special kind of blue

The people of Sakon Nakhon have perfected indigo dyeing to an art, making it a local industry

With a small loom built specially for kids, Jaruwan Chaitamas, an eight-year-old girl, is practising to weave indigo clothes. She slowly weaves and creates the pattern, then corrects it when she finds the pattern going wrong. 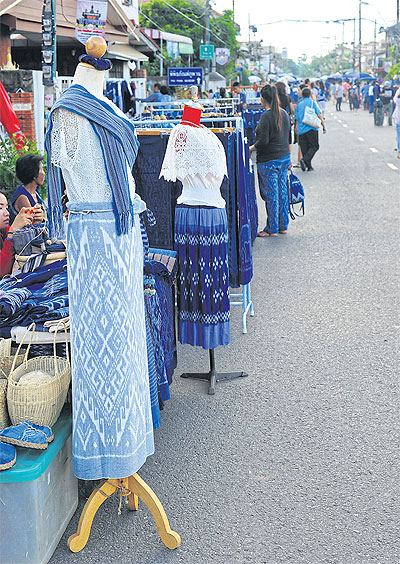 "Weaving is also part of her lessons. The school puts it in the class. But she loves to do it here also," Waree Chaitamas, the leader of the indigo-dye group, says about her granddaughter, who started weaving a year ago.

Weaving cotton clothes and dyeing indigo is a common activity for people at Ban Non Rua. Once only a seasonal job for extra income, making indigo clothes has become a major source of income for villagers, who produce indigo-dyed clothes and grow true indigo in a large plantation, for domestic use and for sale. The plant is a lifeline for the people, and has become a treasure of Sakon Nakhon.

In Thai, Indigo (Indigofera tinctoria) is called khram. The plant is widely grown along the Songkhram River that originates in Udon Thani then snakes through Sakon Nakhon, Nakhon Phanom and Bung Kan. So, the local know-how about indigo dye can be found along the waterway as well.

Sakon Nakhon is famed for its local wisdom of indigo dye, which is handed down through generations. Many villages, including Ban Non Rua, now thrive on producing indigo clothes. Some villages develop their dyeing skills to meet the textile industry's demand.

"The indigo tanks are alive. When I'm in a good mood, it's quite easy to dye. But when I'm in a bad mood, dyeing always fails," Waree says about her indigo dyes, which are kept in vats. Some have been used and reused for 10 years.

What she says is true: the tank is alive. It is the micro-organism that lives in the tanks with the indigo. Created by the fermentation of ashes, herbs and some sugar, the organic compound is a precursor to indigo dye and enables Sakon Nakhon's all-natural cold-dyeing process to give it a long-lasting blue.

Another place tourists can try indigo dyeing is at Ban Tham Tao, Akat Amnuai district. The village offers a workshop where visitors can be part of the dyeing culture.

A large group of tourists are gathering around toolboxes that contain rubber bands, plastic bags, sticks and wood chips in different shapes. They roll up their sleeves, creatively tie knots on the clothes, then patiently dip the clothes in the dark blue indigo tanks and wait for the result.

"You can gradually develop your dyeing technique or patterns as you wish -- there is no limit to your imagination," Thanyarak Taweekittiphan, the manager of Ban Tham Tao Dyeing Group, says about her dream job. Besides providing the workshop, Thanyarak develops indigo-dyed products, ranging from basic T-shirts to scarves and jackets.

If you want to see Sakon Nakhon's indigo clothes in a modern look, Kram Sakon Shop is among the places you cannot overlook. The outlet, a wooden building in the local style, is nestled in a peaceful garden in Sakon Nakhon town. From the outside, it looks like a quiet house, but customers arrive all day and are excited by fashions inspired by Sakon Nakhon's indigo.

Stylish blouses, lovely hats, small backpacks for teen travellers, indigo-dyed textiles with modern patterns, indigo tube skirts with white patterns, local-style shirts, bedsheets and much more keeps customers in the outlet for hours, exploring the whole place. All are surprised at how far Sakon Nakhon's indigo-dyed clothes can be developed. 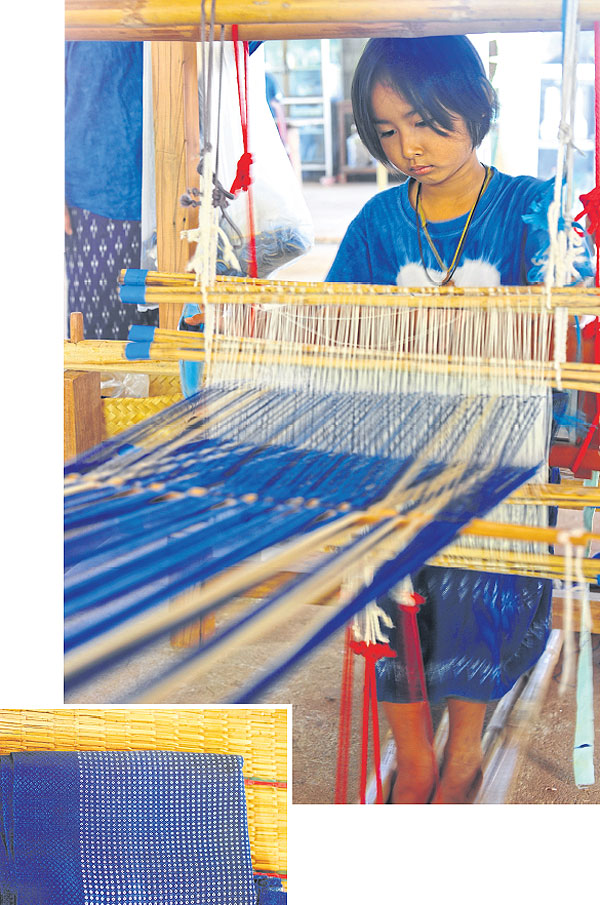 Jaruwan Chaitamas, a grade two student at Ban Non Rua School, learns to weave at home. Weaving and producing indigo-dyed clothes now play a significant role for housewives in the village and communities nearby. They earn 7,000-10,000 baht a month from indigo-related business. 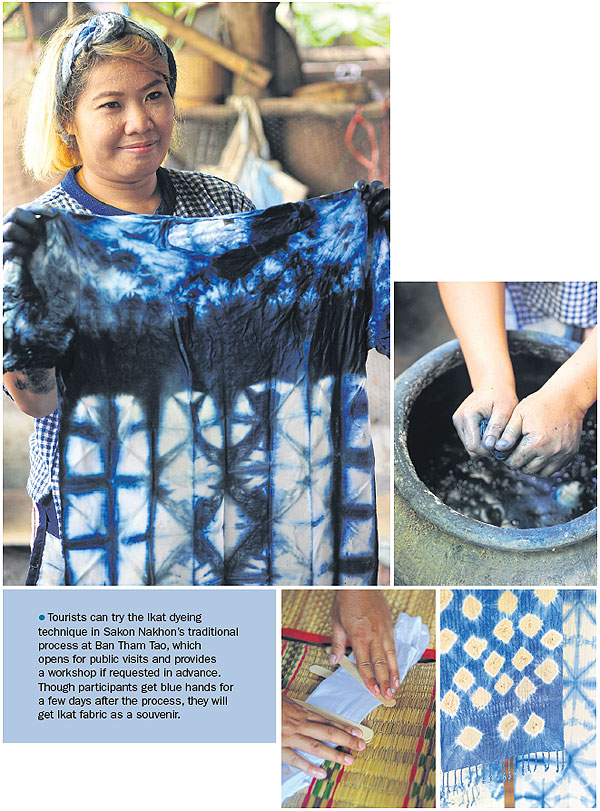 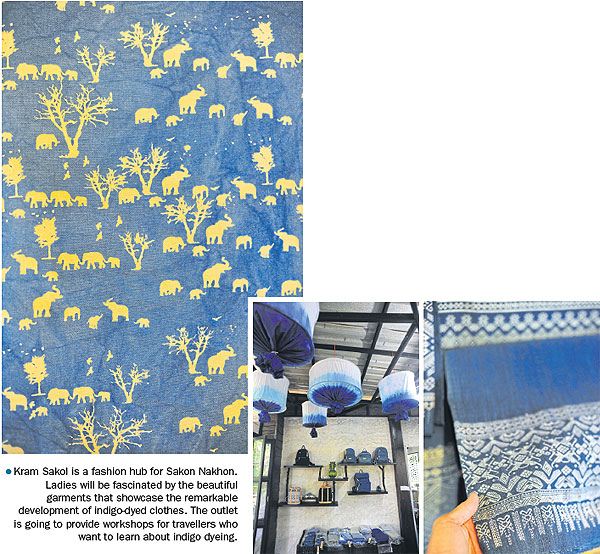 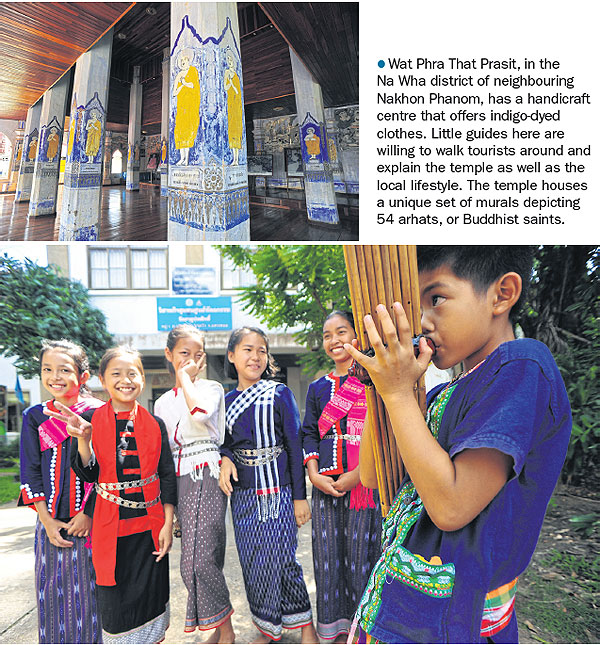 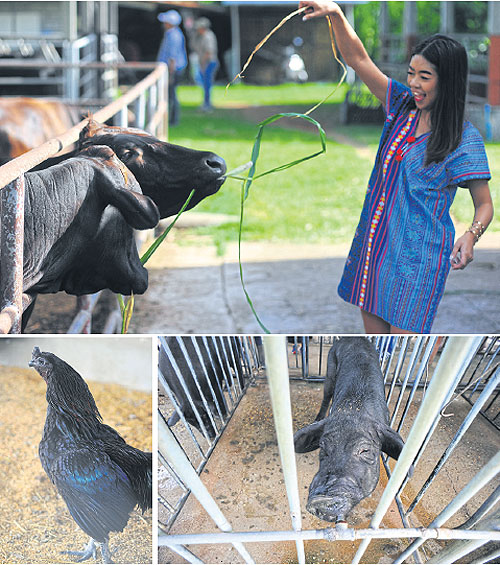 The Phu Phan Royal Development Study Centre showcases how farmers in Sakon Nakhon work when they do not weave or dye. The centre conducts studies and research and then passes on modern technology to the agriculturists. Among the famous projects are three farm animals making their debut for the province. They include the Black Chicken, the Phu Phan Pig and the Tajima Cow. The Black Chicken is a rare breed. Each can be as expensive as 1,500 baht. Phu Phan Pig is a prolific breed which can have up to 18 piglets. The Tajima Cow, or Black Wagyu Cow, is from Japan, and the centre develops them to live in Thailand. The cow is famous for its high quality of meat. 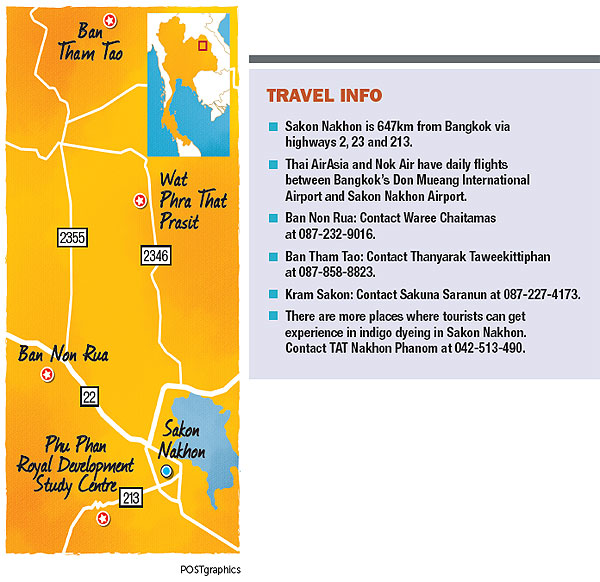